New homes built in Victoria will no longer have to be connected to gas, as the state government plans to halve carbon emissions by 2030 and drive down the cost of living.

Energy Minister Lily D’Ambrosio announced the state government’s first “gas substitution road map” on Saturday, which removes the requirement for all new builds to be connected to the gas network. 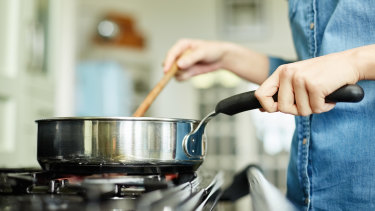 No longer cooking with gas. The Victorian government has removed the requirement for all new homes to be connected to gas.Credit:iStock

She said gas was no longer as cheap as it once was, and with Victorians now at the mercy of gas companies’ high prices it was “it’s time to put gas on the back-burner”.

“We’re already seeing developers who’ve contributed to our consultation on the road map say, ‘Yes, we want to be able to offer all-electric homes’,” she said.

“But that’s not to say people have to have all-electric homes with a new house. It’s their choice.”

Victorians use more gas in their homes and businesses than people in any other state or territory and the fossil fuel contributes around 17 per cent to the state’s net greenhouse gas emissions.

D’Ambrosio said the road map also provided direction for the reskilling workers in sustainable employment, as well as a “clear path” for transitioning to using hydrogen and biomethane.

The Victorian government has been under pressure from the Greens to dump the requirement for gas to always be plumbed into new homes, with the party planning to campaign against Labor on the issue during this year’s November state election.

Tim Read, Greens climate spokesman and member for Brunswick, said it was a “no-brainer” to build new developments without gas, as electrifying homes was increasingly cheaper, more energy efficient and better for health.

The Greens want all new homes to be all-electric by 2025.

A coalition of 31 councils – covering 39 per cent of the state – endorsed a letter to the state government in May calling for planning laws to be amended to allow them to ban gas on new developments.

Environment Victoria chief executive Jono La Nauze said Saturday’s announcement was a step towards ending the state’s dependence on gas, but “lacks urgency and leaves a lot of work to be done”.

He said the Andrews government’s road map lacked clear goals and timelines, and did not rule out the potential use of hydrogen derived from fossil fuels.

“We welcome the fact that the government will no longer force millions of Victorians to use gas and provide greater support for people to shift to all-electric homes to do so – but that really is just the bare minimum,” La Nauze said.

Freja Leonard from Friends of the Earth Melbourne said the roadmap was a step in the right direction but more needed to be done.

“At a time when Victorians are paying twice as much for gas as we did last year and the world is feeling the impacts of climate change we need to stop a single new gas connection being made and support Victorian homes and businesses to rapidly move to an all-electric, post gas energy system,” she said.

“In Victoria, more than 60 per cent of electricity is still generated using higher emissions brown coal, and as has been made abundantly clear in the last month, renewables are simply not yet at high enough penetration to shoulder the load,” he said.

Victorian households can now claim a $250 bonus for comparing their current energy deal with other electricity providers through a state government website launched this week.