No super for you: Victorian politicians blocked from $100,000-a-year pension scheme

Victorian politicians have been denied access to a historical pension scheme for MPs that would have netted some of them annual payments of more than $100,000 for the duration of their retirement.

Serving Labor MPs, who along with other parliamentarians are set to receive superannuation contributions of 16 per cent of their salary from next year, argued they were not compensated as handsomely in retirement as members elected before 2004, when a pension system was in place. 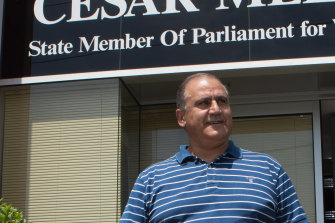 "People who enter politics because they want a pension, I'm sorry, but that's not the right approach," he said, adding that some younger MPs found it difficult to secure employment after short stints in politics.

The Labor members also called on the tribunal to increase separation payments for MPs who leave Parliament after one or two terms. Victorian politicians currently receive between three and six months' salary if they lose their seat.

The tribunal dismissed the urgings of MPs, but found some politicians who served one or two terms could leave parliament with meagre retirement incomes. The tribunal recommended no changes to MP retirement schemes, but called for increased transitional assistance to help members find employment.

Victorian Parliamentary Former Members Association president and former Labor MP Peter Loney said there was an incorrect perception that retired MPs on the legacy pension system "all lived happily on millions of dollars of super". 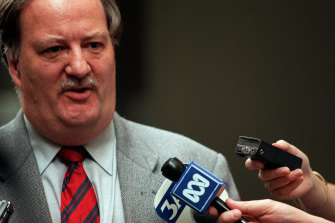 Peter Loney pictured during his time in Parliament.Credit:Jason South

"That perception people have is generally based on those on the highest pensions and that former MPs all walk into board positions or company jobs," Mr Loney, a visitor at Deakin University specialising in government accountability, said.

"The ones who do that are a remarkably small percentage [and] what we've found is many members of parliament have great difficulty finding work of any type."

Mr Loney said there was some merit in the argument made in a 2013 review into Victorian MPs superannuation that said increased remuneration reduced the risk of corruption because elected members were less likely to seek ways to boost their income.

To illustrate the difference in the retirement models, the remuneration tribunal used the example of a hypothetical 43-year-old who went on to serve 12 years in parliament. This person would accumulate about $700,000 in superannuation under the current scheme compared with $1.1 million in the pre-2004 pension program. Under the pre-1996 scheme the MP would have been eligible receive as much as $2.96 million.

Many public servants were on defined benefits schemes until the mid-1990s when the government closed them due to the high cost to the state. Some government employees, including certain judges, still have access to pensions when they retire.

Victorian politicians receive 15.5 per cent of their income as superannuation contributions, the highest of any jurisdiction in Australia, and will receive 16 per cent from next year.

for, No, po, super, Victorian, you
You may also like: