Taipei: A North Korean gymnast has escaped to South Korea by swinging himself over the border barricades without triggering sensors, according to reports.

The man, reported to be in his 20s, surrendered after a manhunt by the South Korean military discovered a breach. 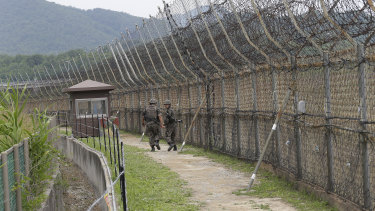 The troops had engaged in an operation near the heavily fortified border in Goseong, after detecting "unidentified personnel" there, the South's military said on November 4.

The unnamed man was detained without incident and asked for asylum, prompting an investigation into his claims and the breach.

Officials were so taken aback by his feat that they asked him to demonstrate twice how he was able to jump over the three-metre fence, according to the BBC's Seoul correspondent. Authorities vowed to investigate why hi-tech security systems did not work.

The audacious defection sparked alarm that the high security demilitarised zone, separating North from South, had been successfully crossed. The four-kilometre-wide, 250-km-long strip is fortified by fences, minefields and armed sentry posts.

Few defectors take the dangerous option of trying to break through, with most of the 33,000 who have fled North Korea since the 90s opting for risky but more achievable routes through China.

b, defects, gymnast, korean, North
You may also like: