When North met South: a timeline of events

On Friday, North Korean leader Kim Jong-un crossed the line that divides his country and South Korea, to meet the South Korean President Moon Jae-in. He is the first North leader to do so since the Korean war. 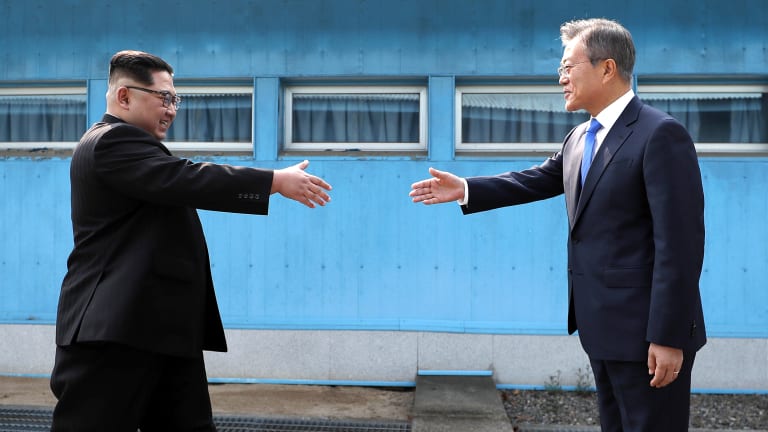 But there have been other instances of approximation. Here's a short history of inter-Korean summits.

1994: A meeting between the two sides almost happens, but is cancelled after the death of Kim Il-sung, the founder of North Korea.

1998: Former dissident Kim Dae-jung is elected president of the South. In his inaugural address, he calls for an end to the ‘Cold War style’ of relations.

– Kim Dae-jung flies to Pyongyang to meet Kim Jong-il, then leader of North Korea – the first time talks are held between leaders of the two sides– The North is emerging from a famine that killed more than two million people.– The meeting is a high point of Kim Dae-jung’s Sunshine Policy, which holds that showering the North with warmth would help it ease out of isolation– The South sends tonnes of food and fertiliser to the North, among other steps aimed at improving ties– Kim Dae-jung wins the Nobel Peace Prize , in part for his work towards the reconciliation

2002: The North continues efforts to develop nuclear weapons. Even after it acknowledged that, the South keeps sending aid 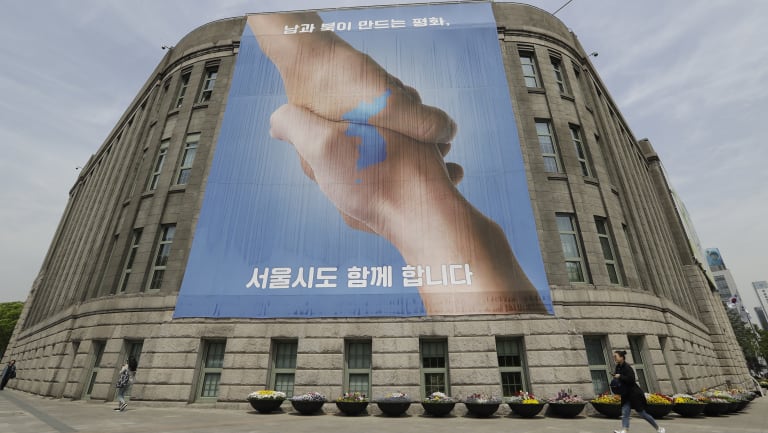 A woman walks by a Seoul banner showing a map of the Korean peninsula and a message for a successful inter-Korean summit.

2007: Second meeting– It occurs near the end of the five-year presidential term of Kim Dae-jung's successor, Roh Moo-hyun.– With the likelihood of an electoral victory by conservative political rivals who were expected to end the Sunshine Policy, Roh sees it as a chance to steer the future of the ties with the North 2010– With Conservatives winning election, the Sunshine Policy is declared over. 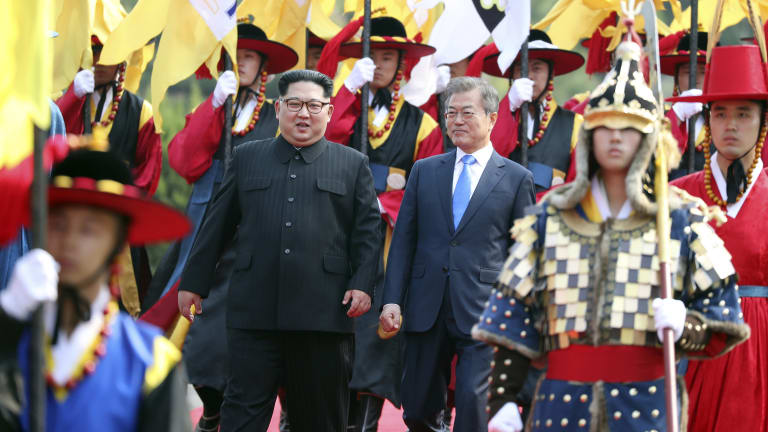 The pair walk through a honour guard.

27 April, 2018: Third meeting– The third summit between the Koreas could produce a statement about pursuing a peace agreement to end the Korean War of 1950-53, which was paused by an armistice but never formally brought to a close– Seen as a preliminary event for a future meeting between US President Donald Trump and Kim Jong-un.

Before Friday's summit, there were other notable events:

January 1, 2017: Kim Jong-un says in a New Year's address that preparations for launching an intercontinental ballistic missile have "reached the final stage."

January 2: US President-elect Donald Trump tweets, "North Korea just stated that it is in the final stages of developing a nuclear weapon capable of reaching parts of the US. It won't happen!"

July 4: North Korea conducts its first flight test of an ICBM, the Hwasong-14, which Kim calls the North's "package of gifts" for the US's Independence Day.

July 28: A second Hwasong-14 is launched with an estimated range reaching into the US mainland, including cities such as Chicago.

August 9: Trump says North Korea had best not make more threats or "they will be met with fire and fury like the world has never seen." North Korea hours later announces a plan to launch a salvo of missiles toward the US territory of Guam, a major military hub in the Pacific.

August 29: An intermediate-range North Korean missile flies over Japan and plunges into the northern Pacific.

September 3: North Korea carries out its sixth and most powerful nuclear test to date, saying it was a hydrogen bomb designed for use on ICBMs.

September 19: Trump tells the UN General Assembly the United States would "totally destroy North Korea" if forced to defend itself or its allies. He refers to Kim as "Rocket Man" who is "on a suicide mission for himself."

January 9: North and South Korean officials meet in the border village of Panmunjom, and agree on North Korea sending athletes and delegates to the Olympics.

March 7: After visiting Kim in Pyongyang, South Korean presidential national security director Chung Eui-yong says Kim is willing to discuss the fate of his nuclear arsenal with the United States and has expressed a readiness to suspend nuclear and missile tests during such talks.

March 9: Trump accepts Kim's invitation to meet, which the White House says will take place by the end of May.

March 26-28: Kim Jong-un makes a surprise visit to Beijing, meeting with Chinese President Xi Jinping and for the first time stepping out of his country and onto the world stage. He pledges to denuclearise the Korean peninsula in return for friendship.

April 18: Trump confirmed that his CIA chief secretly met with Kim in North Korea and said "a good relationship was formed" heading into the adversaries' anticipated summit.

April 21: North Korea says it has suspended nuclear and long-range missile tests and plans to close its nuclear test site as part of a move to shift its national focus and improve its economy. Trump tweeted, "This is very good news for North Korea and the World" and "big progress!"

April 27: Kim and Moon Jae-in meet in the South.