Nuclear power plants promising thousands of UK jobs will not go ahead after Japanese giant Hitachi pulled out of the scheme.

The decision not to go ahead with building new power stations at Wylfa Newydd on Anglesey and at Oldbury on Severn, in South Gloucestershire, deals a huge blow to the nuclear industry and hopes of creating thousands of new jobs.

Hitachi announced it will end business operations on the nuclear power plant construction project at Wylfa, which was suspended in January 2019.

A statement said: ‘Hitachi made this decision given that 20 months have passed since the suspension, and the investment environment has become increasingly severe due to the impact of Covid-19.’ 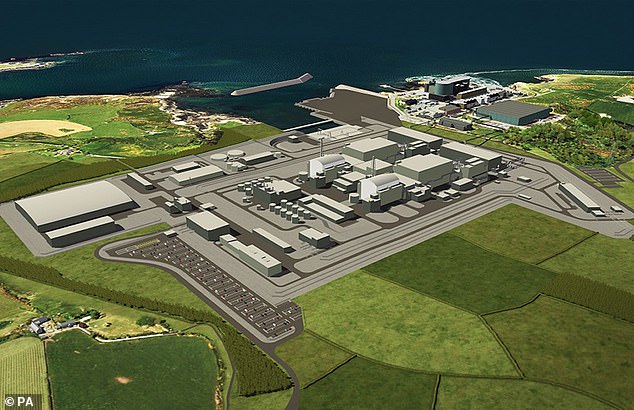 An artist’s impression of the planned nuclear power station at Wylfa on Anglesey in north Wales. Horizon said it will be ceasing its activities to develop two projects in the UK

Horizon said in a statement: ‘Horizon will now take steps for the orderly closing down of all its current development activities, but will keep the lines of communication open with Government and other key stakeholders regarding future options at both our sites.’

The GMB Union expressed their disappointment over the decision, saying that the UK needs ‘at least’ six new nuclear power stations to meet future energy demands and green targets.

Justin Bowden, the union’s National Secretary, said: ‘This utterly predictable announcement from Hitachi is outcome of successive government failures to act decisively around new nuclear, and in particular how it is financed.

‘New nuclear is vital in achieving decarbonisation – especially when teamed up with hydrogen.’

He added: ‘It’s no coincidence that around the world – almost without exception – it’s Governments who finance these projects, as they are the lender of last resort when it comes to keeping the lights on.

‘The fanciful experiment of trying to get foreign companies or governments to fund our future energy needs leaves most ordinary citizens in this country bewildered.’ 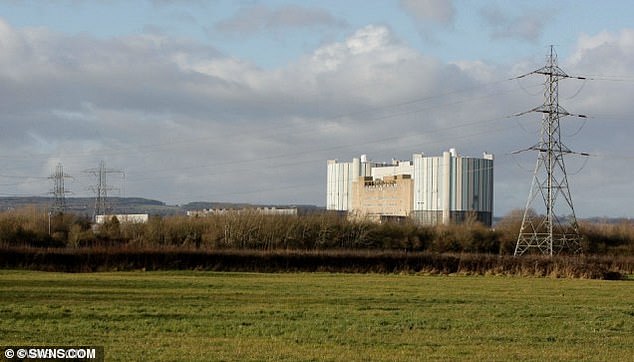 Britain’s, and the world’s, oldest nuclear power station, Oldbury, near Thornbury, South Gloucester. Staff switched off the site’s only remaining reactor in 2012

Horizon’s chief executive Duncan Hawthorne said: ‘I understand this announcement will be disappointing for our many supporters who had hoped to see our project through to completion and I would personally like to thank you for your support throughout our time on this project.

‘In particular I would like to thank our lead host community of Anglesey in Wales, represented by the Isle of Anglesey County Council and Welsh Government, and the key representatives around Oldbury.

‘I would also like to express my sincere gratitude to the many international, UK and Welsh stakeholders who have supported us in the development of our projects.

‘Nuclear power has a critical role to play in helping tackle our energy needs, meeting our climate change targets and levelling up the economy through green growth and job creation.

‘Wylfa Newydd on Anglesey and Oldbury on Severn are highly desirable sites for new nuclear build. We will do our utmost to facilitate the prospects for development which will bring the major local, national and environmental benefits that nuclear can uniquely deliver as we push to transition to a net zero carbon economy by 2050.’