High-profile Brooklyn Democrats came under fire last week for attending a birthday party at which many of the attendees were neither wearing a mask nor social distancing.

Yet when news broke of the COVID rule-breaking party, many of them reacted with a shrug, while some came off as annoyed that it had made news in the first place.

The party was held last weekend to celebrate the 50th birthday of Carlo Scissura – head of the New York Building Congress, a construction trade organization.

When Shant Shahrigian, City Hall reporter for The New York Daily News, asked Seddio to comment on how he attended the party, Seddio reportedly said: “I farted about four times, but fortunately it didn’t smell. My wife punched me twice ‘cause she heard me do it. That was the most exciting part of the night.”

Yet images from the party clearly show numbers exceeding 10, only a few wearing masks – despite Seddio’s insistence that he and Scissura and “about 10 others got together.” 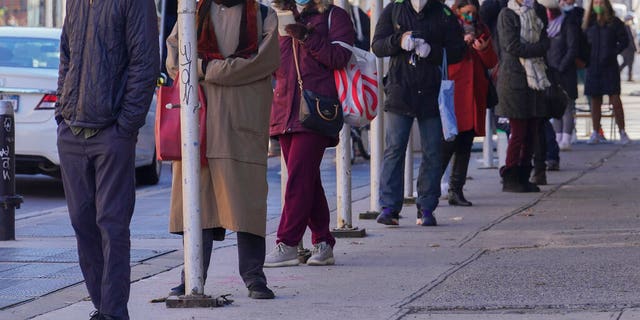 FILE: People wait on a line stretching around a block for a clinic offering COVID-19 testing, Wednesday, Nov. 18, 2020, in the Park Slope area of the Brooklyn borough of New York. T
(AP)

“I was there with 10 people there, and that was it. It’s ridiculous. Here’s my feeling: Thank God that’s the only news we got in the whole f—–g city,” he reportedly said, according to the Daily News.

Lewis-Martin told the news outlet that only six or seven people were at the party when she arrived that guests were supposedly coming and going in “shifts.” She said that any photos with larger groups of people must have been when the shifts overlapped.

“I have antibodies. I was already sick,” she said. “I would have no concern about spreading anything.”

In a statement to Fox News, Scissura said there were “shortcomings” that he regrets.

“I greatly appreciate the gesture of my friends to throw me a surprise party, but we must follow strict protocols so we can get past this pandemic,” he said.

The attendees were merely the latest Democrats to get caught appearing to flout coronavirus guidelines – despite diligently preaching them to the public.

Most notably was California Gov. Gavin Newsom who earlier this month was busted for having attended a friend’s birthday dinner at an upscale French restaurant despite a spike in coronavirus cases. After a report of the dinner was made public, Newsom said he made a “bad mistake” and promised to “own it” and move forward.

Fox News’ Vandana Rambaran and The Associated Press contributed to this report.

at, busted, Dems, indoo, NY, packed
You may also like: