RICHARD LITTLEJOHN: Man the lifeboats! It’s the obscene crockery squad here to ‘safeguard’ us from a couple of jokey coffee mugs

Two Yorkshire lifeboatmen have been sacked for ‘production of inappropriate material of a sexual nature’.

Ben Laws and Joe Winspear, from Whitby, were told by the RNLI that their behaviour posed a ‘safeguarding risk’ to schoolchildren.

Their ‘crime’ was to give each other coffee mugs featuring images of semi-naked women — one of them with Winspear’s head superimposed upon it.

A ‘senior female member of staff’ saw the mugs on a shelf at headquarters and decided they were a clear and present danger to any children who may be visiting the premises. 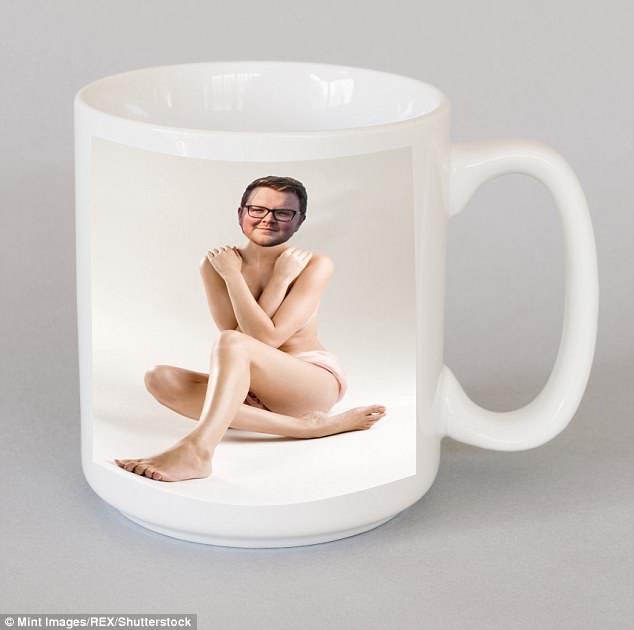 One mug featured Mr Winspear’s head superimposed on a naked woman’s body (pictured, is a mock-up)

Laws, with 15 years’ service under his lifebelt, and Winspear, who joined in 2014, were told over the phone that they were being ‘stood down’ immediately.

Several of their colleagues have since walked out in solidarity, or been sacked, too. No one seems quite sure. Their dismissal has sparked a North Sea-style storm of protest on social media and in the seaside town, where a petition is being raised demanding their reinstatement.

But the RNLI is unrepentant. A spokesman said: ‘The lifeboat station should be an environment where people can expect to be treated with dignity and respect.

Whitby RNLI crewman Ben Laws and his workmate Joe Winspear were allegedly sacked because of mugs they had in the office with naked women on them. Pictured: Whitby RNLI

‘We cannot allow bullying, harassment or discrimination in what should be a safe and inclusive environment and there will be serious consequences for anybody who demonstrates this behaviour within the RNLI.’

Hang on, we’re talking about a couple of jokey coffee mugs here, exchanged by colleagues as Secret Santa gifts.

Where’s the alleged ‘bullying, harassment and discrimination’ of which they have been found guilty? If anyone is on the wrong end of bullying and harassment — not to mention character assassination — it’s Ben Laws and Joe Winspear.

As it happens, guys ’n’ gals, these two blameless lifeboatmen are merely the latest victims of the Jimmy Savile hysteria.

Ever since it was revealed that the old monster had been at liberty to molest his evil way through hospitals, care homes and the BBC, public bodies and charities have been frantically slamming the stable door. In their desperation to be seen to be ‘doing something’, an entire ‘safeguarding’ industry has sprung up.

It took me only seconds on the internet yesterday to discover a current recruitment advert from the RNLI for a full-time Safeguarding Officer, on a salary of up to £41,926 a year.

Nice work if you can get it. 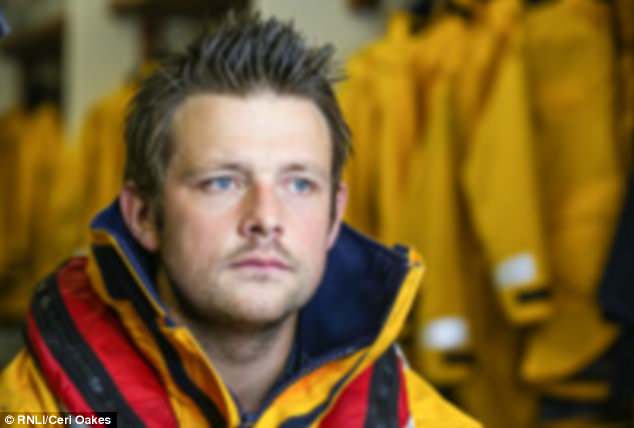 Of course, in this febrile climate, it’s no wonder that a ‘senior female member of staff’ decided that possession of ‘inappropriate’ crockery was the greatest threat to child safety since Savile and that other novelty Northern nonce, Cyril Smith.

Each time I hear the word ‘inappropriate’ I want to retch. Who gets to decide what’s appropriate and what isn’t? Finding offence where none exists is our new national pastime. Lives and careers are wrecked daily by these deranged witch-hunts.

Let’s just pause, however, to examine the evidence in this latest case. There’s some muttering about WhatsApp messages, but nothing has been produced.

From the available photographs, the images on the mugs aren’t remotely obscene. You’ll find more explicit material in national newspapers and on TV. 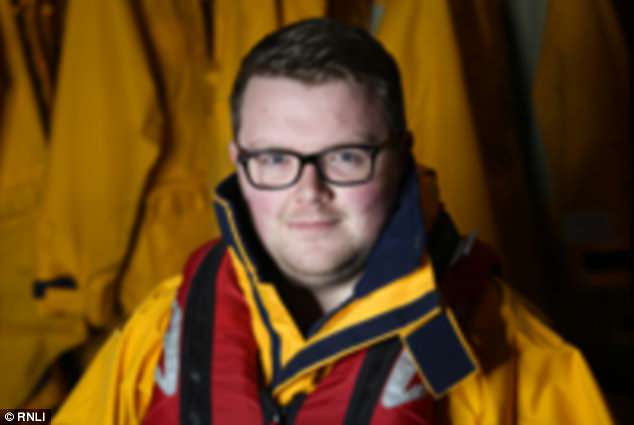 Trainee RNLI volunteer Joe Winspear (pictured), 26, was the other crew member to be sacked

As I’m writing this, at lunchtime, an advert has just popped up on Sky News for a range of ladies’ swimwear. The models are flaunting just as much — if not more — flesh than is exposed on the offending coffee cups. In the photo with Joe Winspear’s head plonked on top, the model is wearing what looks like a pair of passion-killing Bridget Jones big knickers.

And here’s a thought. Surely by putting a man’s head on a woman’s body, they could have claimed they were making a stand against transphobia.

Heck, Winspear could even have said he was now identifying as a woman and demanded that the RNLI provide him with his own toilet and changing facilities. 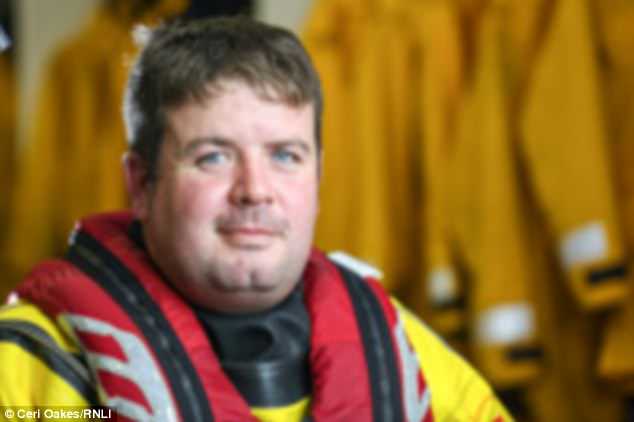 That would have sent them into complete Corporal Jones mode. It’s a gender fluid lifeboat-person, Mr Mainwaring!

OK, so I jest, up to a point. But this isn’t in the least bit funny. It’s simply another example of how our public institutions have been hijacked by professional Guardianistas to promote and impose their own warped brand of political bigotry and intolerance.

One Mail Online reader, commenting on the story, wondered how much of the £50 he’d just donated to the lifeboat service was going towards the wages of the ‘senior female member of staff’ involved.

Well, since the RNLI is prepared to pay the best part of £42,000 a year for a Safeguarding Officer, I’d have thought quite a chunk.

How many of these essential members of staff does the organisation employ?

Compare and contrast that attractive salary with the volunteers who actually man the lifeboats for nothing. 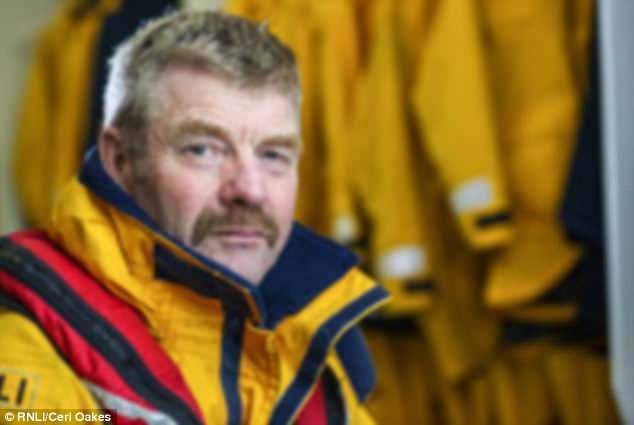 Check out the website of the Whitby lifeboat crew. Along with Ben Laws, who is a chef, and Joe Winspear, a banker, you’ll find, among others, a mechanic, a joiner, a teaching assistant, a heating engineer, a publican — even a potash miner. How many of us would devote our spare time from working down a potash mine to volunteering for lifeboat duty?

They are the Best of British, ready to risk their lives in all weathers to rescue those in distress. In 2016, the most recently available figures, RNLI crews saved 431 people from drowning.

The Whitby lifeboat station was established in 1802, pre-dating the RNLI by more than 20 years. For more than 200 years, selfless crews have been on standby around the clock, all day, every day, prepared to subject themselves to the mercy of the most treacherous seas imaginable in order to aid others. 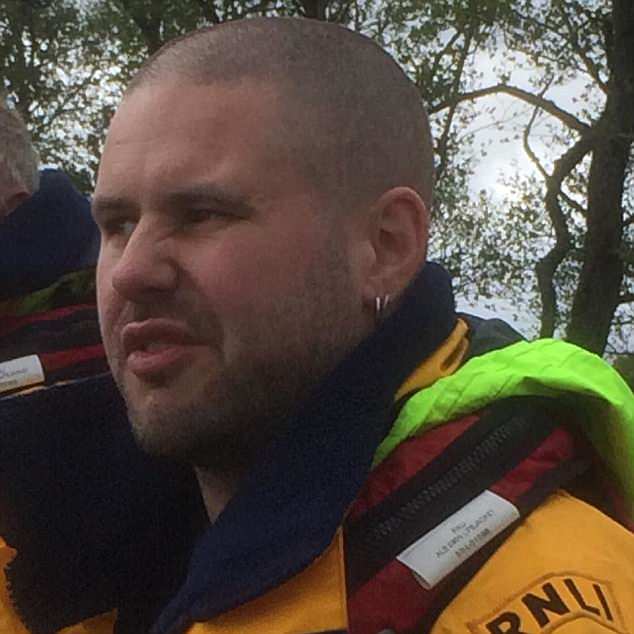 They know all about genuine risk, not the confected ‘safeguarding’ variety. And ‘confected’ really is the operative word.

Someone with local knowledge pointed out that there was no need for any child to be exposed to these ‘inappropriate’ mugs at headquarters.

The lifeboat museum, which is open to families and school parties, is in a different building, on the other side of the River Esk.

Ben Laws and Joe Winspear should be reinstated immediately, with a grovelling apology.

Their courage and self-sacrifice deserve better than to be repaid by having their reputations trashed and their lifeboat service terminated because a couple of harmless novelty coffee cups are deemed insanely to pose a ‘safeguarding risk’ to children.

At least it was his own cash, unlike the eighty-six grand of taxpayers’ money which was given to the civil servant who alleges he was bullied by Commons Speaker John Bercow. 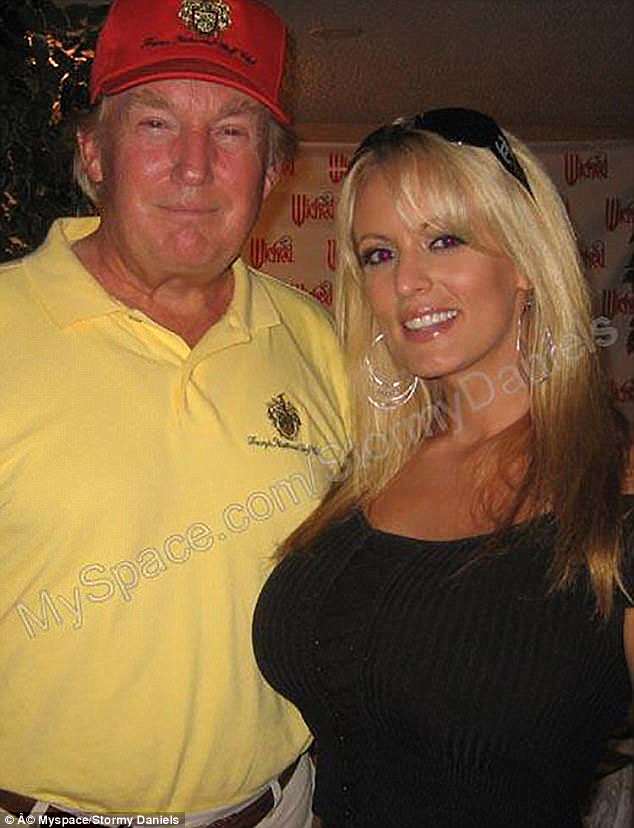 As if the NHS isn’t under enough pressure, it’s now being urged to treat so-called sex addiction.

Charities say there has been a 400 per cent increase over the past decade in the number of people claiming to be addicted to sex.

But who can say what’s addiction and what isn’t? One woman was diagnosed with the ‘disease’ because five times a day wasn’t enough for her. There are those who would think her frigid. The internet has, of course, made sex freely available. Ephraim Hardcastle disclosed yesterday that the chap tipped to take over the RSPCA is a big fan of the gay dating app, Grindr.

Chris Sherwood even used it on a visit to Uzbekistan. ‘Your nearest hook-up is Vlad, 57km away, over the mountains, behind the goatshed.’

No two people are the same. A woman has just been jailed after stabbing her boyfriend while they were indulging in ‘clown sex’.

I know I lead a sheltered life, but that’s a new one on me. Making love while dressed up as Coco the Clown? How do they manage to keep a straight face?

I’m reminded of the man who was found hanging from a rope in his attic, wearing a deep-sea diver’s outfit. The coroner said it was a sex game that had ‘gone horribly wrong’. I recall speculating at the time that, presumably, it must have gone horribly right at some stage.

Do we really want our A&E departments cluttered up with men in gimp masks and women in clown suits seeking sex addiction treatment?

Excuse me, nurse, I’ve been waiting hours. ‘I’m not a nurse, big boy, I’m a serial sex addict with a medical fetish. Are you a doctor . . ?’