There was no march down St Kilda Road nor a sweeping line of blue uniforms but the names of four more officers were added to the Victoria Police memorial on Tuesday morning, marking the single biggest loss of police life in the state’s history. 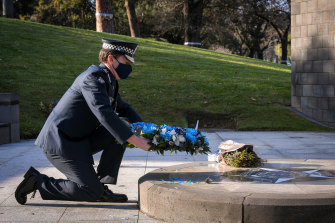 On Tuesday – National Police Remembrance Day – their names joined those of other officers who have died in the line of duty and are commemorated on the memorial.

Laying a wreath in the bitter cold of a clear spring morning, Chief Commissioner Shane Patton said the names of 19 other police employees who died throughout the year would also be added to the 2020 honour role.

“It's a sad day, it's a special day, and it’s a very important day where police right across the nation come together to remember, to reflect and honour our fallen colleagues," Mr Patton said.

"This year has even more meaning with the most significant loss of life we’ve ever experienced on April 22, where tragically four of our colleagues were killed on the Eastern Freeway in Kew. 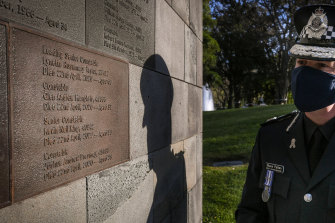 “It continues to highlight the risks of policing. There is no such thing as a routine traffic stop."

Mr Patton said the death of each police officer sends a tremor right through the organisation, making 2020 a particularly tough time for the force.

He said police had taken a lot of comfort from the ongoing community support they’ve received throughout the year.

“I thank every one of my members right across Victoria for what they do,” Mr Patton said.

The traditional September 29 memorial service went online this year due to coronavirus restrictions.

There, families of the fallen paid touching tributes to those killed.

All had a common theme – a dedication, commitment and a love of the job.

At 10.44am, police officers in their stations and homes across the state paused for a minute's silence to honour all those who've made the ultimate sacrifice in the line of duty.

"You have fought the good fight, life's race has been run, and peace your reward, for eternity begun," Assistant Commissioner Libby Murphy read from the Police Ode.

"Rest in peace friend and colleague for the sun has now set".

Senior Police Chaplain Jim Jung, who led the service, said 170 Victoria Police officers have paid the ultimate price for their service throughout their history of Victoria Police, their names forever enshrined on the wall of remembrance at the police memorial.

"May we that remain keep their memory alive and surround their families with love and protection," he said.

Premier Daniel Andrews said he hoped adding the names of the Leading Senior Constable Taylor, Senior Constable King, Constable Prestney and Constable Humphris would forever remind Victorians of their bravery and the ultimate sacrifice they made.

"As the Premier of the state, can I say to you that my thoughts and prayers will be with their families today and with every police member and every police family on what will be a very challenging Police Remembrance Day," he said.

"To live your life in the service and protection of others is an amazing thing. To lose your life doing that work is a terrible tragedy.

And, day, on, poli, sad, Special
You may also like: