London: It's been a big month for Rishi Sunak. Britain's new baby-faced chancellor barely had a moment to find his office before the coronavirus tsunami washed over Europe and challenged everything the Oxford and Stanford-educated wunderkind thought he knew about economics.

Just four weeks after being installed as Prime Minister Boris Johnson's effective deputy amid another Brexit-induced political drama, the 39-year-old Tory rising star stood in the House of Commons and delivered his first budget. He threw billions of pounds at minimising the fallout from the impending coronavirus crisis but it just wasn't enough. 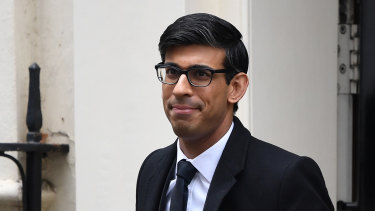 British Chancellor Rishi Sunak has promised to save millions of jobs as the coronavirus pandemic worsens. Credit:Getty Images

Within a few days, he was bunkered down in Whitehall working with public servants on a scheme so huge in scope and generous by comparison that it would even win praise from self-declared socialist Bernie Sanders and some of Britain's most influential union leaders.

Sunak and Johnson stunned the country when they revealed the plan: the British government would cover 80 per cent of the wages of millions of affected workers – provided companies keep staff on the books rather than fire them as the pandemic worsens and a government-enforced lockdown strangles the economy.

COVID-19 is rewriting the rule book in nearly all aspects of daily life and the British response shows the once-in-100-year pandemic is also laying waste to ideology. Direct wage subsidies would normally be anathema to the party of Margaret Thatcher but these are far from normal times. Sunak and Johnson have pushed the break-glass-in-emergency button and sent a powerful message that they will not hesitate to adopt once unthinkable tactics to save businesses and jobs.

"These last 10 days have shaken our country and economy as never before," Sunak says. "We have put aside ideology and orthodoxy to mobilise the full power and resources of the British state.

"What we have done will, I believe, stand as one of the most significant economic interventions at any point in the history of the British state and by any government anywhere in the world." 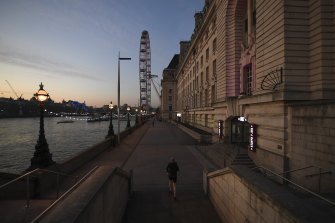 Central London is close to empty as the effects of a government-ordered lockdown are felt.Credit:AP

Matthew Lesh, the head of research at the London-based free-market Adam Smith Institute, backs Sunak and Downing Street despite the unprecedented state intervention in the economy: "I think most conservatives or classical liberals or libertarians can understand quite well that there is a role for government during emergencies like wars and pandemics," he said. "This is exactly when you want the government to step in."

The biggest flaw with Britain's approach is the time it will take to get the money flowing. The furloughed worker scheme will not be operational until late April because a brand-new system has to be built to process the payments. To make ends meet in the meantime, Sunak is urging businesses to dip into their cash reserves, take advantage of the government's deferral of tax payments until 2021, or access low-interest government loans.

Treasury will contact self-employed Brits directly, point them to an online form and pay the grant directly into their bank account. But work on setting up that digital infrastructure will also take months and those payments probably won't arrive until June.

Australian Treasurer Josh Frydenberg cites this time gap as a reason why the Morrison government didn't follow the UK model and instead chose to deliver payments to businesses through the existing tax system.

Professor Chris Rowley of the University of Oxford's Kellogg College describes Sunak's plan is "visionary and bold" but says the fine print is key.

"The scheme was dreamt up from scratch in just a couple of days in a great show of conceptual skills [but] the mechanics are unlikely to be operational until late April. So, companies, managers and leaders do actually need to think, be creative, take some responsibility and hold their nerve."

Some employers haven't been convinced to sign up and hundreds of thousands of workers appear to have already been sacked.

Long lines outside Centrelink offices in Australia made international news but the same scenes have not been repeated in the UK. People applying for universal credit normally have to attend a meeting at a job centre but that requirement has been dropped amid the outbreak and applicants now have to call a number to make a phone appointment. However people have to wait for hours for help and the payments take weeks to arrive.

Consultancy firm Capital Economics thinks the furloughed workers scheme will end up costing tens of billions, but spare hundreds of thousands from joining the unemployment queue. Capital is forecasting Britain's unemployment rate to rise from about 4 per cent to 6 per cent due to the crisis but says unemployment would have probably hit 8 per cent if not for Sunak's interventions.

The Centre for Economics and Business Research believes the Euro zone GDP will contract 9 per cent year-on-year in the second and third quarters, leading to an overall reduction in 2020 of 6 per cent.

Consultancy firm Capital Economics thinks the furloughed workers scheme will end up costing tens of billions, but spare hundreds of thousands from joining the unemployment queue.

The centre's deputy chairman, Douglas McWilliams, says Britain and the wider world are facing the worst crisis since the Great Depression and warns wage subsidies will need to be backed up by more government support as lockdowns ease.

"I'm a fan of [the scheme], I think it will certainly help do the job but I suspect we may need even a little bit more once the shops and things start reopening to kickstart the recovery," McWilliams says.

"It may be some sort of tax holiday or something like that. We have to assume that people are going to be a bit nervous about purchasing big-ticket items when their finances have been damaged a fair bit and when they're not entirely certain about their job prospects."

McWilliams heaps praise on Sunak for acting swiftly and generously but says the chancellor had plenty of help.

"The people who are really responsible for this are the civil servant Treasury officials who are sometimes good and sometimes less good," he says. "They've understood the depth of the problem here very quickly and come up with big measures to cope with it.

"This time they have really been on the ball."