It's an experience you may have had recently. While walking within 5 kilometres of home, you spot something new that you've never noticed before.

Writer Ricky Kuruppu is hoping to channel that sensation of unexpected discovery with a trail of uplifting messages he has left across the streets of Hawthorn. 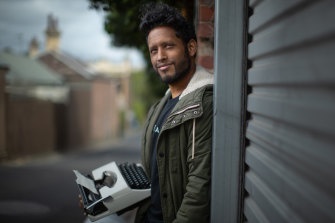 Ricky Kuruppu has made a treasure hunt of uplifting messages in Hawthorn. Credit:Simon Schluter

Armed with an old typewriter, Mr Kuruppu has been sticking up his brief snatches of poetry in public places for the past couple of years.

Those who discover his tiny pieces of paper with the torn edges often tag him on social media. But during the pandemic, he noticed it was happening more and more.

"People were saying that it brought novelty and joy to their day, which I appreciated," he said.

With Melburnians confined to their suburbs for almost two months, Mr Kuruppu decided to make a local game of his street art. 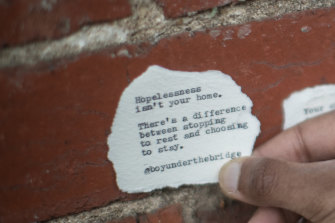 The messages can be found via clues posted on Ricky’s Instagram page.Credit:SImon Schluter

Each Friday he uploads a map of his daily walk from the fitness app Strava on his Instagram page to show where he has been. To help people join the hunt, he also offers some visual clues.

"Normally they're visible but they'll just be on a fence, on a wall, sometimes on a traffic pole where you push the button," he said.

"When it comes to these ones, they're a bit more out of sight."

So far, the response has been very positive, with people trying to find as many as they can. One week, Mr Kuruppu tried a "pro mode" with no hints. Someone found 15 out of 20.

Mr Kuruppu describes his writing as "trying to inject some positivity into the world". One piece goes like this: "Endings aren't everything, the point of some stories is that they're still going."

He believes part of the appeal of what he does is the enjoyment of finding something new in a familiar place, particularly at a time when we feel so restricted.

"It gives you something to look away from your phone at and get engaged in the world, there's always things to look out for and keep your eyes peeled," he said.

"During lockdown I've discovered routes, houses and areas that I never thought existed, you notice details that you haven't seen before."

After losing his job at the start of the COVID-19 pandemic, Mr Kuruppu said having a creative outlet had been a lifesaver in recent months.

"I haven't seen my family in a year and I don't know when I will again," he said.

Having the pandemic affect his own mental health, Mr Kuruppu said he wanted to help others.

"Now it's reaching people, it's lifting my spirits," he said.

He likes to use a typewriter because it forces him not to constantly rewrite his work. It also means some of the snippets have typos but he thinks that makes them more real.

"I often go back and they're gone," he said of his messages. "They know that someone has been in this spot, it's one of a kind."