Optimism emerges from fraught US election

Democracy has done its work. It may have kept Americans, and many around the world, in nail-biting suspense for days, and it may have been smeared by some who should know better, but it got the job done. The next president of the United States, Joe Biden, has won what appears to have been a largely free and fair election. The people have spoken, and it's a moment to celebrate that founding principle of a democratic nation.

The election certainly had its challenges. A raging pandemic, the threat of overseas interference and a fractious and bitterly divided nation put America's electoral system under enormous strain. But people on both sides of the aisle voted in unprecedented numbers, in a largely respectful manner. 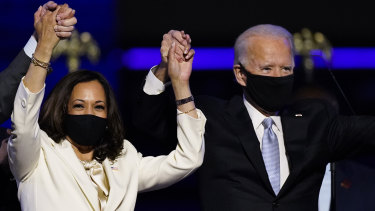 And for all the fears of the streets being overrun by civil unrest when the election result was called, whichever side came out ahead, the images broadcast from cities across the country overwhelmingly revealed people celebrating the decision in a joyous and peaceful manner.

That is not to say everyone has been gracious in defeat. True to type, Donald Trump is flouting convention. Showing no sign of conceding, he is said to still be mustering his forces to battle it out in the courts. But there should be little concern that he will hunker down in the White House past his time. While he may admire some of the world's autocrats and dictators, America's constitution ensures he has limited access to the military or judicial powers that could extend his stay. His Twitter tirades amplifying baseless accusations of election fraud are no match for the inevitable transition of power.

Mr Trump will probably take refuge at his beloved Trump Tower in New York, where he is likely to continue casting a long shadow over the Republican Party. Even from the sidelines, his divisive populist message will continue to resonate with his base for some time to come.

But this really is a day for President-elect Biden, a man whose decades of public life has shown a far greater affinity with the norms of governing and telling the truth than Mr Trump. Washington politics is about to get a much-needed dose of normality.

And it is a day for Kamala Harris. A daughter of Indian and Jamaican migrants, and the first woman to be elected vice president, she is a powerful symbol of what is possible even at a time when progress on racial justice had seemingly stalled.

The job ahead for both of them is formidable. With close to 240,000 Americans dead from COVID-19, an economy under enormous duress, and rancorous racial and political division not seen since the tumultuous days of the Vietnam War, the to-do list of crisis-level issues is a long one.

But Mr Biden is not in completely new territory. When he entered office as former president Barack Obama's second in command, the nation was being battered by the global financial crisis and the continuing fallout from the disastrous Iraq war.

His commitment to look to science as a guide to tackling the pandemic will be welcome news to many Americans. More broadly, Mr Biden's promise to take climate change seriously by rejoining the Paris agreement, to repair the damage inflicted on relationships with some of its closest allies, and to take a more inclusive approach to geopolitical issues will surely be welcomed by many more across the world.

Today there is reason to be optimistic for America's future. But it will require a willingness on all sides to abide by the will of the people, a readiness to lower the temperature of political debate, and an ability to compromise for the greater good. We wish them well.