London: Europe is bracing for a new spate of national lockdowns as coronavirus surges across the continent and threatens to fill hospitals with more patients than the first deadly wave of earlier this year.

German Chancellor Angela Merkel and French President Emmanuel Macron on Wednesday announced fresh lockdowns to bring down the rapidly growing number of infections, hospitalisations and deaths in each country. 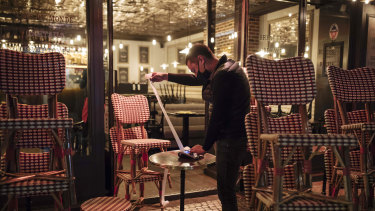 All restaurants in France will be forced to close for at least a month under a new national lockdown.Credit:AP

The decisions mark a milestone in Europe's battle with the disease because governments had until now resisted the sort of mass closures ordered during the outbreak of March and April.

In an address to the nation, Macron said France had been "overwhelmed" and warned the second wave would kill more people over winter than 30,000 who died in the spring.

He said avoiding a lockdown was not acceptable because it would kill 400,000 citizens.

"All of us in Europe have been taken aback by the extent of this virus," he said. "We know that this second wave will be even harder and more lethal than the first. 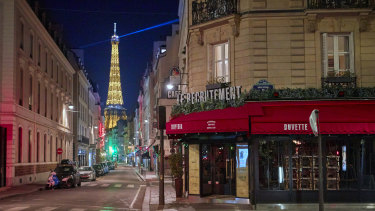 There is a rising panic in Europe about the crisis and a growing view that while the second wave won't peak as sharply, it will last longer than the first and ultimately claim more lives.

The disease is proving less fatal than earlier this year but deaths are still climbing rapidly.

On Wednesday, 310 new deaths were recorded in Britain, 244 in France, 236 in Poland, 204 in Italy, 139 in Belgium and 85 in Germany, which had been one of the continent's most effective countries at suppressing the virus. 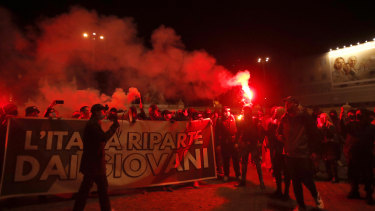 Tighter restrictions in Italy have triggered protests in Rome.Credit:AP

The same measure in Melbourne peaked at less than 9 cases per 100,000 residents.

Germany's rate of 156 is lower than the vast majority of Europe, meaning Merkel has ordered a partial lockdown earlier in the course of its outbreak compared to its neighbours.

European markets fell on Wednesday as investors worried about the partial lockdowns in the continent's largest and second-largest economies, and the capacity for other governments to respond to the crisis.

Some debt-laden countries are running out of fiscal levers to support affected businesses and workers.

Merkel announced a €10 billion ($16.6 billion) assistance package on Wednesday but Germany's debt-to-GDP ratio is only forecast to peak at 77 per cent.

However, in Italy, which is also battling a major outbreak, the debt-to-GDP figure was expected to hit 156 per cent before the second wave appeared.

Australia's debt-to-GDP will peak at 43.8 per cent, according to this month's budget.

Boris Johnson says MPs should NOT get a £3,300 pay rise during Covid crisis