An accountant and a pilot have been jailed over an elaborate scheme to fly a quarter of a tonne of the drug ice over the Pacific Ocean and into Melbourne in a light aircraft.

Peter Caluzzi and Hugh Gorman were friends from the Freemasons and in 2016 became embroiled in a plan by former Sydney cafe owner Jim Soukoulis to fly ice from northern California to Melbourne, deliver it to others and make millions of dollars. 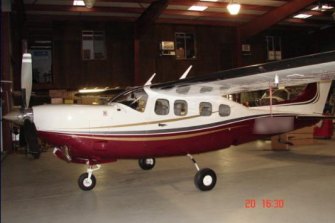 The Cessna aircraft that was intended to take the ice from California to Melbourne.Credit:Australian Federal Police.

On Tuesday in the County Court, Caluzzi, 61, was jailed for 17 years and Gorman, 75, for 14 years after both pleaded guilty to conspiring to import a commercial quantity of a border-controlled drug. Caluzzi also pleaded guilty to unrelated drug trafficking in 2013.

Soukoulis remains at large after the 55-year-old was granted bail and failed to report to police in November 2019.

Caluzzi, who ran an accountancy firm in Melbourne’s north-west, counted the other two men as clients and friends, and introduced them when Soukoulis indicated he needed a pilot.

Over the next 10 months, the trio bought a Cessna plane in California and had 271 kilograms of ice delivered to a Santa Rosa storage facility. 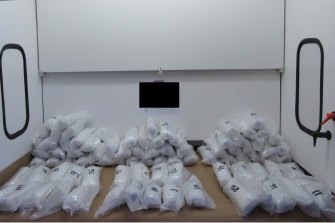 The ice seized by US authorities.Credit:Australian Federal Police.

Communicating via encrypted BlackBerry devices, Soukoulis oversaw the operation and liaised with others in the drug chain. Caluzzi arranged the finance and Gorman found the Cessna, modified it and was to fly across the Pacific with stops in Hawaii, American Samoa and Lord Howe Island.

But the intended haul never got off the ground. American drug authorities raided the storage facility in June 2017 and seized 10 bags of drugs with an estimated Australian street value of between $59 million and $118 million.

The three men were arrested in Melbourne and Sydney in the following weeks.

County Court judge George Georgiou acknowledged Soukoulis was the head of the conspiracy and directed the others. Under his instruction, Caluzzi and Gorman devised a plan to find, buy and modify the Cessna, and discussed where in the aircraft to conceal the ice.

During Gorman’s trips to Santa Rosa he had an aluminium box fitted around the aircraft’s fuel bladder as a space to hide the drug “bricks” and he planned to cover the packets with grease to throw off sniffer dogs.

Gorman previously spent a decade in the RAAF and held a pilot’s licence, but also obtained an American licence and did flight-simulation sessions.

In July 2017, when Gorman returned to Melbourne from one trip, Australian authorities arrested him and found in his luggage documents linking him to the Cessna and the storage facility and a written outline on how the bricks could be hidden, Judge Georgiou said.

On the outline he had also written: “Nice.”

Caluzzi and Gorman initially denied involvement in the plot – they claimed they bought the Cessna for a friend – but the accountant later said they were to be paid $1 million each, although Gorman claimed he was to receive only $14,000. Judge Georgiou rejected this claim given the risks the pilot took and work he did.

The judge said the pair played critical roles in a sophisticated, well-planned scheme that would have delivered a large amount of drugs into Melbourne, which ultimately would have preyed on the vulnerable.

Though their guilty pleas avoided a long trial, their offending was very serious and motivated by greed, he said.

“Those who are involved, at any level, in the importation of a controlled drug into Australia should understand they run the risk of incurring substantial punishment if apprehended,” Judge Georgiou said. “Your offending is also rightly to be denounced and condemned.”

Caluzzi felt obliged to assist Soukoulis in the scheme after his involvement in a series of failed business ventures with his client, the court heard.

Judge Georgiou acknowledged Caluzzi lost his marriage and business after he was charged and his mental health had declined. The father of four must serve 13 years and nine months before he is eligible for parole.

Gorman, a father of three and a great-grandfather, must serve at least eight years. The judge conceded Gorman’s advanced age and health problems meant he might die in prison.