About 5,000 heart attack sufferers in England missed out on life-saving hospital treatment due to the Covid-19 pandemic, study claims

Five-thousands heart attack sufferers in England missed out on life-saving hospital treatment due to the Covid-19 pandemic, a study has claimed.

Researchers analysed NHS hospital data to show that around the peak of the crisis, in late March, admissions were 35 per cent lower than usual.

Up to a quarter of people who suffered the most severe heart attack — a complete blockage of an artery — did not seek help, figures suggest.

Admissions are now picking back up again because the coronavirus is fizzling out, according to researchers at the University of Oxford.

But patient confidence is nowhere near pre-Covid levels as Brits still fear catching the coronavirus if they go to hospital.

Experts warned the risk of death from delaying heart attack treatment is higher than picking up Covid-19 at hospital. 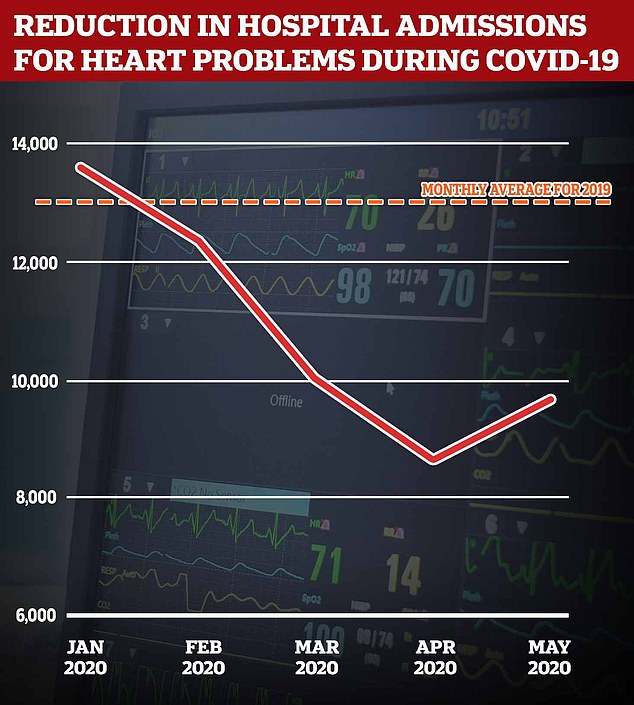 University of Oxford found NHS hospital admissions for any ‘acute coronary syndrome’ — a sudden reduction of blood to the heart — dropped from a monthly average of 13,075 during the pandemic. Overall between January and May, there had been around 8,000 fewer admissions for acute coronary syndromes than would be expected. Some 5,000 of these were for heart attacks specifically

In a plea to the nation, she added: ‘It is important that anyone with chest pain calls an ambulance immediately.

‘Every minute of delay increases the risk of dying or experiencing serious complications from a heart attack.’

Senior author Professor Colin Baigent said: ‘Some people may still be worried about going to hospital because they fear encountering the coronavirus.

‘But the truth is that, by delaying or not going to hospital, people with heart attacks are at much greater risk of dying from their heart attack than catching the virus.’

He added that the NHS ‘is ready and able to provide excellent cardiological care’.

The Oxford team used data regularly collected by NHS Digital from hospital trusts in England to get up-to-date information about admissions.

They found admissions for any ‘acute coronary syndrome’ — a sudden reduction of blood to the heart — dropped from a monthly average of 13,075 to 10,118 in March.

They plummeted to 8,739 in April before slightly increasing to 9,756 in May, findings in the Lancet revealed.

Overall between January and May, there had been around 8,000 fewer admissions for acute coronary syndromes than would be expected.

1.4 MILLION WAITING FOR A ROUTINE OP ON NHS

Some 1.45million patients have had to wait at least 18 weeks to start hospital treatment for routine operations such as hip and knee replacements — the worst since 2007 and more than double last May, NHS figures have revealed.

Shocking NHS England data that laid bare the strain Covid-19 has put on hospitals showed only 54,550 patients were admitted for treatment in May — a fraction of the 295,000 recorded this time last year.

Hospitals in England were told to postpone all non-urgent elective operations from 15 April at the latest, for a period of at least three months.

Joint replacements, cataract removals and hernia repairs were all among the elective surgery postponed in order to free up beds.

As the health service faces a huge backlog of operations, the waiting lists have soared, figures show.

And those facing delays for their operation could see their condition worsen while they wait, which could lead to a whole host of other problems.

Professor Neil Mortensen, president of the Royal College of Surgeons of England, said: ‘We have been concerned since the start of this pandemic that suspending elective surgery for a period of months placed a time bomb under what was already a crisis in NHS waiting times.

‘That time bomb has now detonated, with the numbers of those waiting more than a year for treatment spiralling out of control to the worst levels since September 2009.

‘And the supposed legal right for patients to be treated within 18 weeks looks more like a vague aspiration, with two in five now waiting longer.’

Some 5,000 of these were for heart attacks specifically, which is medically known as a myocardial infarction.

The researchers looked at a certain window, March 23 to March 30, and found hospital admissions for heart attacks fell 35 per cent.

Some 1,335 came in during this period compared with the 2,061 that would be expected in a given week.

The British Heart Foundation (BHF) said it was ‘extremely concerned’ about the estimates.

Senior researcher Professor Barbara Casadei, of the British Heart Foundation, said today’s findings ‘must be taken into serious consideration’ in the event of a second wave of coronavirus.

There are more than 200,000 UK hospital visits each year are due to heart attacks, and around three in ten people die, according to the British Heart Foundation.

Heart and circulatory diseases, including heart attacks, cause 170,000 deaths each year – more than a quarter of all deaths in the UK.

During an attack, the heart muscle is starved of oxygen, most commonly caused by a blockage of one of the coronary arteries.

Urgent treatment to get the blood flowing back to the heart muscle is important to avoid permanent damage to the organ, or death.

Patients with heart attacks caused by a complete blockage of an artery to part of the heart – called ‘ST-elevation’ fell by 23 per cent – according to the study.

It can lead to life-threatening cardiac arrest within hours of the major artery being blocked, which is why it is a medical emergency.

It usually needs an urgent procedure where a stent is inserted into the blood vessel to open it up.

Rates of admission for heart attacks caused by a partial blockage of blood supply to the heart — ‘non-ST elevation’, which may also need a stent  — fell by 42 per cent.

Fewer patients attending hospital with heart attacks has also been observed in other European countries, as well as in the US.

And it has been reported that patients presenting to hospital often do so much later, threatening chances of survival.

One study of a 28 per cent increase in life-threatening complications among patients with heart attacks during the pandemic.

Commenting on the study, Professor Naveed Sattar, an honorary consultant in cardiovascular medicine at University of Glasgow, said heart failure may become more common as a result of people delaying care.

He said: ‘It’s a sad reality than a proportion of people with symptoms of heart attacks have been put off seeking medical care that could have lessened the damage to their hearts. Heart failure rates may increase as a result.’

A heart attack usually causes severe pain in the centre of the chest. But it may only cause slight discomfort.

Professor Sattar said: ‘Most would be expected to have some symptoms but a minority do have minimal symptoms and some heart disease can be “silent”.

‘It does appear that a lot more people than normal were hesitating to come into their doctors or A&E despite having some quite noticeable chest pain.

‘The message is that they must come in going forwards. This is another part of the pandemic harm – “indirect” medical harm – to add to delayed cancer tests etc and many other things.’

The NHS faces a huge backlog in routine operations and diagnostic tests as a result of postponing them.

But it has urged people to use the national health service as much as possible, including for emergencies, despite the coronavirus circulating.