Paris: The streets and terraces of Paris and eight cities in France emptied on Saturday night as people were asked to stay home to stem a second wave of the coronavirus that caused a record daily number of infections in the country.

French President Emmanuel Macron last week ordered nightly curfews in cities where the coronavirus was the most active, saying it was spreading at parties and private gatherings and action was needed or else hospitals risked being overwhelmed. 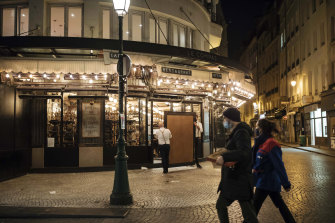 Waiters close a bar terrace in Paris. French restaurants, cinemas and theaters are trying to figure out how to survive a new curfew aimed at stemming the flow of record new coronavirus infections. Credit:AP

While some people understood the need to contain the virus, restaurant managers cautioned about the impact on a sector that already suffered major losses during the spring lockdown.

"There will surely be employees who will lose their jobs, several restaurants will go bankrupt," said Stefano Anselmo, 44, manager of Italian restaurant Bianco in Paris. "It's a disaster."

France, like other European countries, is grappling with how to slow the virus’ spread and ease pressure on a once-again strained healthcare system while keeping its €2.3 trillion ($3.8 trillion) economy open and protecting jobs.

"For restaurateurs I understand that it is difficult but there is a moment when it is necessary to make a balance between public health and economic health," said Bastien Delaunay, a 22-year-old law student.

The number of new coronavirus infections in France jumped more than 32,000 in one day on Saturday for the first time since the start of the epidemic, health ministry data showed.

The 9pm to 6am curfews will last at least four weeks.

"On Saturday night we used to go out all the time. We organised many things and now that's over. At 9pm we must go home. That's the time when we used to go out," 22-year old Jeanne Baudin, said while sitting on a terrace with friends.

Italian Prime Minister Giuseppe Conte will announce on Sunday another set of measures to counter the new wave of COVID-19 cases, his office said, after the country registered a new daily record in infections on Saturday.

Conte's office said the government is discussing new restrictions with local and health authorities, aiming to stem contagion while limiting the impact on individuals and businesses.

Italy was the first major European country to be hit by COVID-19 and had managed to get the outbreak under control by the summer thanks to a rigid two-month lockdown on business and people's movement. But infections have soared in recent weeks.

The country posted 10,925 new infections on Saturday, according to the health ministry, its highest daily tally so far, up from the previous record of 10,010 cases posted on Friday.

Government ministers have ruled out a repeat of the lockdown imposed at the start of the crisis but officials have looked at a range of alternative measures to reduce social contact.

The head of the north-western region of Liguria, Giovanni Toti, said on Facebook the government would urge schools to alternate between online and in-person lessons and tell companies to increase remote working.

The government has already toughened restrictions twice in 10 days, making wearing masks mandatory outside the home and imposing limitations on public gatherings, restaurants, sports, and some school activities.

According to Italian newspapers, the new restrictions could also target non-essential activities including gyms, pools and amateur sporting events.

Italy has the second highest death toll in Europe after Britain, with 36,474 deaths since the outbreak flared in February, according to official figures.

Cary Grant got hooked on LSD and was bisexual

Parents of mummy blogger, 29, who died with three children speak out