Follow
Home » World News » ‘Partial success’: Pandemic is slowing down, says the WHO

London: The World Health Organisation says the coronavirus pandemic has “slowed down” in the past week although death rates continued to rise, with more than 67,000 new deaths reported.

The United Nations as health agency said in its latest epidemiological update on Wednesday, London time, that even though there was a “downward trend” in the number of cases in Europe, the region still had the biggest proportion of new cases and deaths globally. WHO noted that Africa reported the highest increase in new cases and deaths, driven by South Africa, Algeria and Kenya. 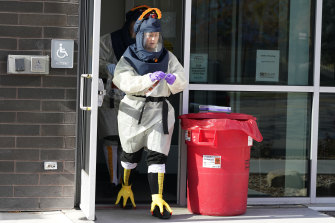 In the past week, the agency said, the number of new cases reported in Europe dropped by about 6 per cent after a 10 per cent decline the previous week, suggesting that lockdowns across the Continent are effectively slowing transmission. Still, the region accounts for about half of new global deaths.

Britain’s caseload fell by about 13 per cent, its first weekly decline since late August. There were about 1600 people hospitalised every day in the UK in mid-November, but that remains far lower than the more than 3000 patients admitted daily in early April.

In Germany, Chancellor Angela Merkel agreed with leaders of all 16 federal states to extend and tighten measures against the coronavirus until at least December 20 and likely into January, she said. 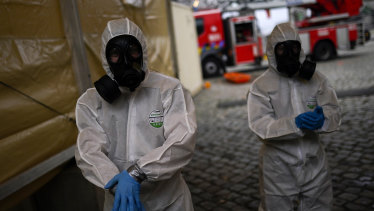 Facon said that “scientific studies are showing that in patients with symptoms, rapid antigen tests are almost as reliable as PCR tests if they are done in the first five days after the symptoms appear.”

He says that in cases where people are strongly suspected to have the disease but produce a negative rapid test, a separate PCR test will be conducted to reduce the risk of cases slipping through.

Belgium is one of the European countries worst hit by the virus in per capita terms. As of Wednesday, more than 561,000 people had contracted the disease in a country with a population of around 11.5 million people. More than 15,900 have died.

In Austria, Chancellor Sebastian Kurz pushed back against calls to write off this year’s ski season because of the pandemic. The ski resort of Ischgl became a hotspot for infection in March, with foreign tourists from across Europe carrying the virus back to their home countries after authorities there failed to react swiftly to an outbreak.

But Kurz told reporters in Vienna on Wednesday that Austria’s ski resorts would be treated in the same way as other businesses when a decision is made whether to relax lockdown measures after December 6. 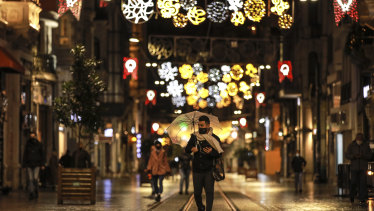 A few people walk in Istiklal street, the main shopping street in Istanbul, minutes into a coronavirus lockdown on Saturday.Credit:AP

In Turkey, President Recep Tayyip Erdogan said his country's own vaccine against COVID-19 could be ready for use by April.

The vaccine, ERUCOV-VAC, is being developed by Erciyes University, in the central Turkish province of Kayseri, and is currently undergoing phase 1 of testing.

The country's daily COVID-19 infections have jumped above 28,000 after the government resumed publishing all positive cases. It had been accused of hiding the full extent of the crisis by omitting asymptomatic cases in data published since July 29.

Health Minister Fahrettin Koca announced 28,351 new infections in the previous 24 hours, emphasising that the data represented “all people whose PCR tests are positive whether they display symptoms or not.”

Koca on Wednesday, also announced 168 COVID-19 deaths in the previous 24 hours. Turkey had previously been reporting around 6000 daily new patients. The total number of cases since the outbreak started has now passed 467,730, with 12,840 fatalities.

President-elect Joe Biden puts on his face mask after a press conference on Tuesday.Credit:AP

In the United States, President-elect Joe Biden is urging caution during the Thanksgiving holidays, asking people to forgo big family gatherings, wear masks and maintain social distancing, as different states and cities take stricter precautions to halt the spread of the disease.

"I know we can and we will beat this virus," Biden said, acknowledging that Americans are feeling pandemic fatigue. "Life is going to return to normal. I promise you. This will happen. This will not last forever."

Anyone over the age of 16 coming from another state or country must submit the form online before or upon arriving at Los Angeles International Airport, Van Nuys Airport or Union Station or risk a fine of up to $US500 ($678).

Los Angeles Mayor Eric Garcetti announced the requirement as he warned the virus was “threatening to spiral out of control” in Los Angeles.

More than 260,000 Americans have died from COVID-19, with the daily toll on Tuesday surpassing 2000 for the first time since May.