Donald Trump could still be given the honour of a speech at Parliament when he visits Britain.

Peers are urging the Lord Speaker to defy a ban imposed by his Commons counterpart John Bercow on the US President addressing politicians, MailOnline can reveal.

Mr Bercow launched a tirade against Mr Trump from the Speaker’s chair last year – vowing to deny him permission to give a speech in Westminster Hall.

But while he was cheered to the rafters by Labour MPs as he condemned the president’s immigration curbs on mainly-Muslim countries, the intervention drew fury from Tories who accused Mr Bercow of wading into international diplomacy and putting the Special Relationship at risk.

Peers are now pushing for the Lord Speaker, Lord Fowler, to step in and offer the use of the lavish Royal Gallery for Mr Trump to deliver a speech – either during his working trip in July or on a future State Visit. 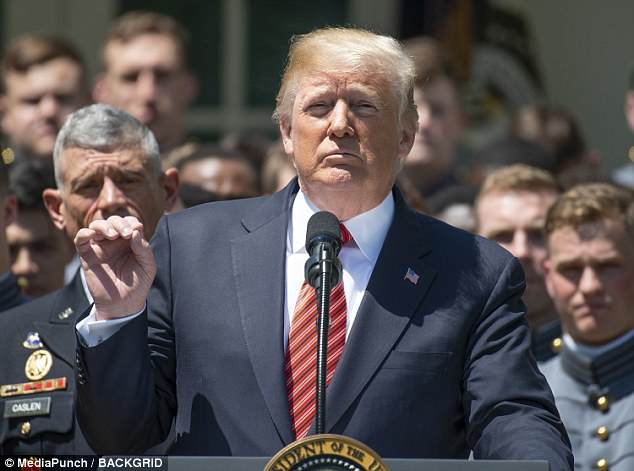 Following months of wrangling, the White House finally confirmed last week that Mr Trump will visit the UK on July 13. A red-carpet State Visit is still being planned after that 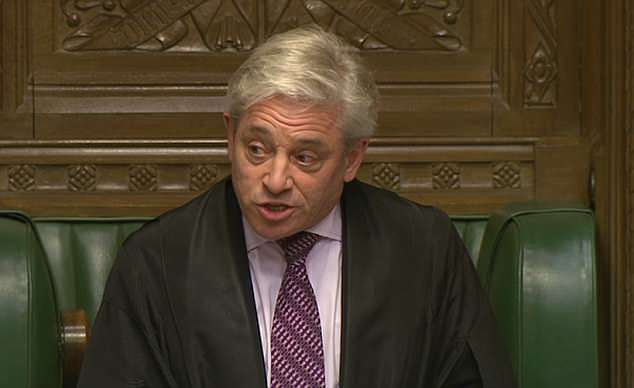 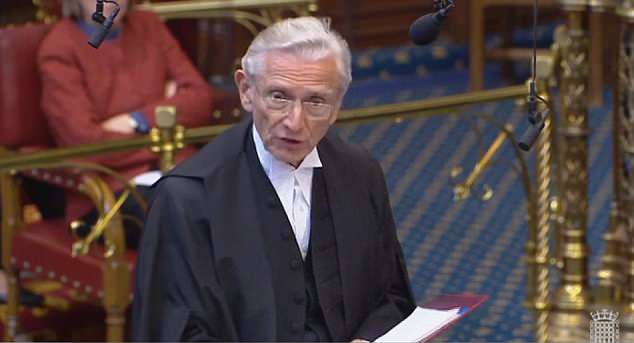 They believe Lord Fowler is ‘receptive’ to the idea after he sharply criticised Mr Bercow for declaring a unilateral ban and said he was ‘open minded’ on whether the honour should be granted.

Lords sources believe the Lord Speaker could offer the use of the Royal Gallery without getting approval from Mr Bercow.

Who decides whether foreign leaders can speak at Parliament?

The rules on speeches by foreign dignitaries at Parliament are dictated by conventions and traditions that have developed over hundreds of years.

The use of Westminster Hall is closely guarded by three powerful keyholders.

The ancient hall – the oldest part of the Parliamentary estate that dates back around 1,000 years – has played a pivotal role in UK history.

It is protected by the Speakers of the Commons and Lords and the Great Lord Chamberlain, on behalf of the Queen.

Currently they are John Bercow for the Commons, Lord Fowler for the Lords and David Cholmondeley, 7th Marquess of Cholmondeley.

Events cannot take place without the agreement of the key holders.

However, the Lord Speaker does appear to have scope to authorise use of the Royal Gallery without Mr Bercow’s agreement.

That opulent venue is under the control of the Upper House, and has been used to host numerous speeches – including by Ronald Reagan in 1982 and Xi Jinping of China last year.

Mr Bercow previously referred to a ‘convention’ that invitations are issued jointly by the Speakers – but conceded that he does not have the final word when it comes to the Lords estate.

Support for bypassing the Commons Speaker could be fuelled by growing anger at his handling of allegations about bullying of staff.

The Royal Gallery has been used as the venue for numerous speeches by visiting foreign leaders in the past. Ronald Reagan addressed MPs and peers there in 1982, and last year it hosted President Xi Jinping of China.

Following months of wrangling, the White House finally confirmed last week that Mr Trump will visit the UK on July 13.

He is expected to hold talks with Theresa May and potentially meet the Queen – although the details are still being hammered out.

Critics who accuse him of fuelling sexism and racist rhetoric have promised to stage mass demonstrations on the streets of London.

But ministers have insisted it is right that the leader of Britain’s closest ally visits and is treated with respect.

Boris Johnson praised the announcement of the trip as ‘fantastic news’.

Mrs May was among the first foreign leaders to Mr Trump in the White House in January last year, when she extended an invite for a red-carpet State Visit.

However, planning stalled amid fears over mass protests, and the president pulled out of a working visit in February to open the new US embassy in London.

He also earned a public rebuke from the Prime Minister after sharing anti-Muslim tweets from far-Right group Britain First.

US ambassador Woody Johnson insisted last week that the State Visit will happen.

Former Cabinet minister Lord Tebbit told MailOnline he would like to see the Lord Speaker offer to host the US president for a speech.

‘I think it would be appropriate for him to be invited. I think there would probably be support from a lot of peers for doing so – not least because it would get up the nose of the Corbynites,’ he said.

‘John Bercow took a unilateral decision. I am not sure he has the power to.

‘We can normally rely on him doing anything that is against the Conservative Party.’ 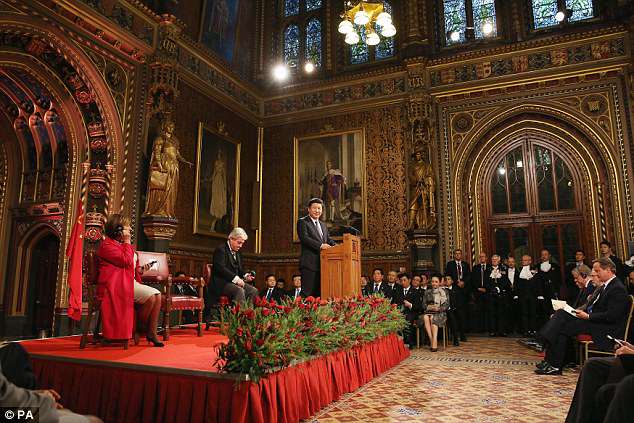 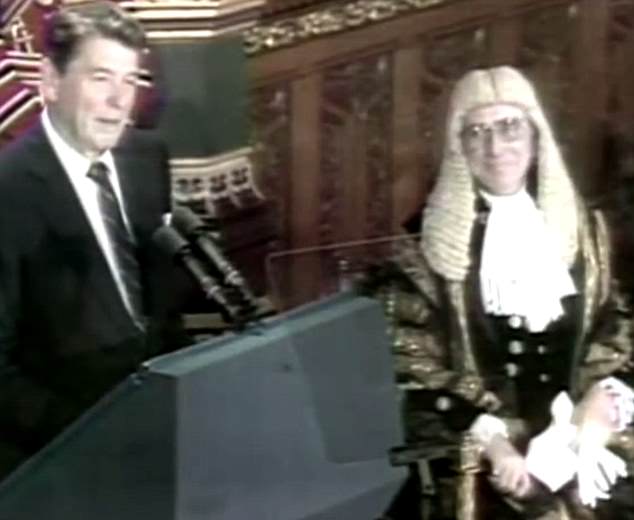 Former Labour trade minister Lord Digby Jones said: ‘I think it would be an excellent idea.

‘Trump is the democratically elected leader of our largest trading partner, our biggest inward investor and the guarantor, when all’s said and done, of our security.

‘The bosses of China and Saudi Arabia are happily invited.’

Commons Speaker is meant to stay out of party politics

For hundreds of years the Speaker has presided over the House of Commons.

The holder of the post traditionally maintains political neutrality, not least to avoid suggestions of bias when he or she chairs parliamentary debates.

By convention, the parties do not field candidates in the Speaker’s constituency at general elections.

But John Bercow, who has held the post since 2009, has come under fire for what some see as a lack of impartiality.

His insistence that Donald Trump be barred from addressing Parliament caused anger.

He has also revealed he voted Remain in the EU referendum, and a sticker saying ‘B*****s to Brexit’ has been spotted on his car.

In 2013, Mr Bercow was condemned as ‘a disgrace to the office of Speaker’ after he suggested that Eastern European immigrants have more ‘aptitude and commitment’ to work than British people.

Conservative peer Lord Cormack, a respected constitutional expert, said: ‘He is the President of the United States, our most important ally.

My own personal views on him are completely irrelevant – we should give him the opportunity to speak to both Houses.’

He added: ‘He should be received with proper good manners, and as far as a speech is concerned…he would speak where most other presidents have spoken – in the Royal Gallery.

‘It would be an address to both Houses of Parliament, and that would be entirely appropriate.’

Another Conservative peer, who did not wish to be named, said Mr Bercow’s decision to block the use of Westminster Hall had ‘interfered with the diplomatic interests of the country’.

The peer added: ‘You have to accept that in the democratic world you do business with whoever is elected, and in this instance, in relations with the US, Britain has let France steal a march on it.

‘Given the way the world is evolving we need to be friendly with the US.

‘I think that the adverse reaction to Trump on a personal level is understandable, but on the diplomatic level it is extremely foolish.’

Downing Street refused to comment on the idea, but sources said arrangements for the visit in July are ongoing.

In his extraordinary statement on the prospect of a Trump visit in February last year, Mr Bercow said: ‘An address by a foreign leader to both House of Parliament is not an automatic right. It is an earned honour.’ 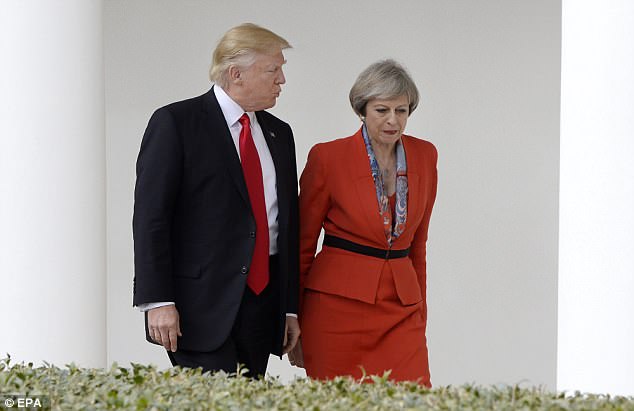 He said the three ‘keyholders’ for Westminster Hall – the Commons and Lords Speakers and the Queen’s Lord Great Chamberlain – usually worked ‘by consensus’ to authorise the use of the venue.

He entered the House in 2001 after stepping down as an MP following more than three decades in the Commons.

He also had the job of Tory chairman in Sir John Major’s government in the 1990s.

Mr Bercow admitted he did ‘not perhaps have as strong a say’ in whether the Royal Gallery was used as a venue, but insisted that ‘customarily an invitation to a visiting leader to deliver an address there would be issued in the names of the two Speakers’.

‘I would not wish to issue an invitation to President Trump to speak in the Royal Gallery,’ he added.

A clearly angry Lord Fowler confirmed afterwards that he had not been consulted before Mr Bercow’s outburst, and suggested it might be ‘better’ if neither of them had the power to veto such prestigious addresses.

Currently the Royal Gallery is being used to house paintings that are being restored. But there is not thought to be any obstacle to its use for a speech.