HOUSE MAJORITY Leader Nancy Pelosi said during her weekly briefing Democrats will not budge on the coronavirus stimulus package unless Republicans offer $2 trillion.

Pelosi addressed reporters this morning saying she and Senate Minority Leader Chuck Schumer have attempted to negotiate with Republicans and Treasury Secretary Steven Mnuchin – but neither are willing to double their $1 trillion original offer. 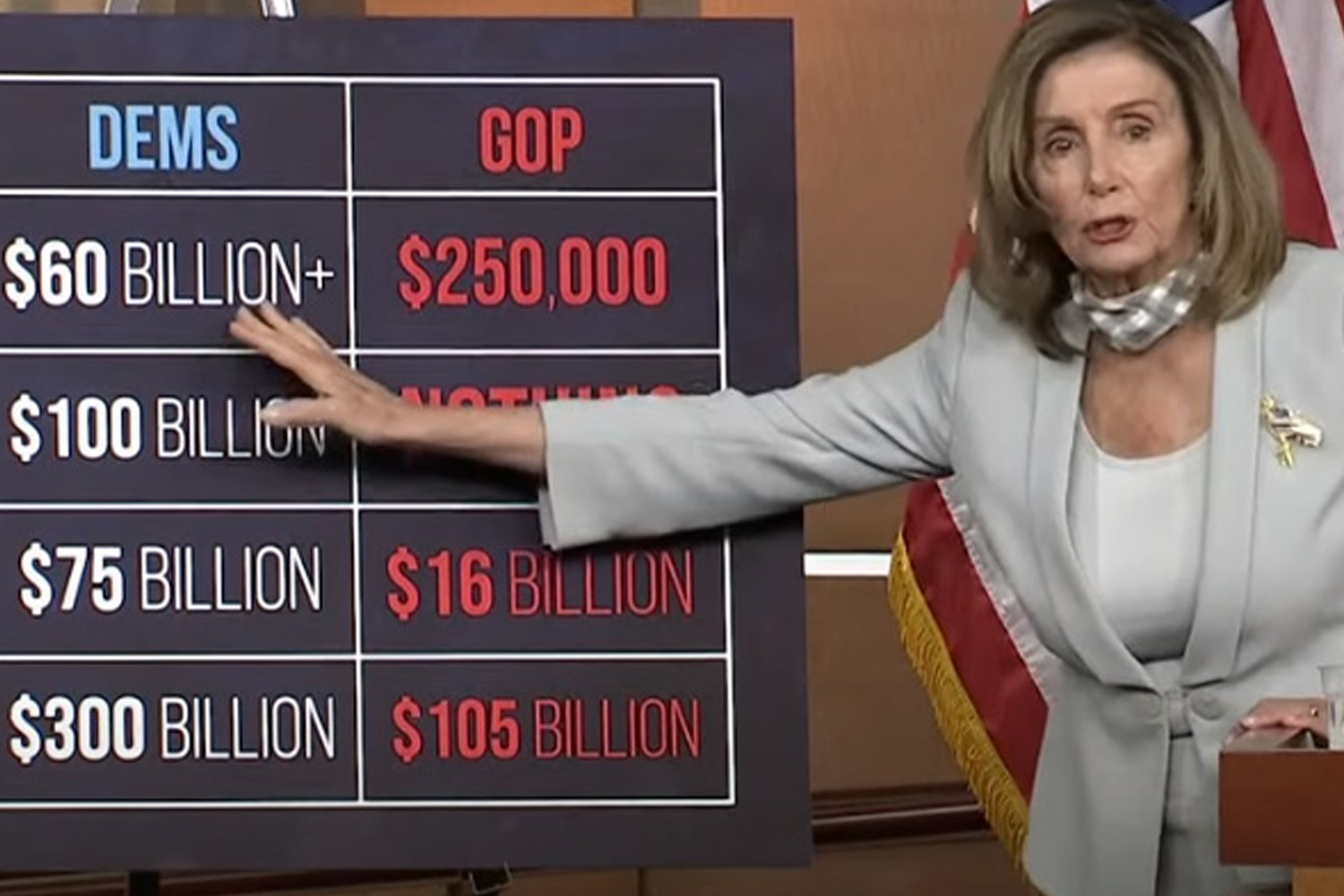 "We’re not inching away from their meager piecemeal proposal.. The press says, why can’t you come to an agreement? Because we are miles apart in our values," the speaker told reporters who asked why Democrats weren't coming down from their proposed $2 trillion COVID-19 HEROES Act.

Pelosi said she was surprised to hear Treasury Secretary Mnuchin's comments earlier this morning saying the second round of $1200 stimulus checks were stalled due to Democrats unwilling to meet at the Republicans' proposed $1 trillion plan.

"They called yesterday, the Secretary, and said would you like to sit down and we said what we said all along: we come down a trillion, you come up a trillion," Pelosi said, referencing the current Democratic package would require $3 trillion in spending but they are willing to negotiate to $2 trillion if the Republicans should do the same.

"But we're not sitting down at the table to validate what you have proposed because it does not meet the needs of the American people," she said. "And we will not contribute to your waving a partial benefit to the public at the expense of everything else we want to do and to the benefit of the high end." 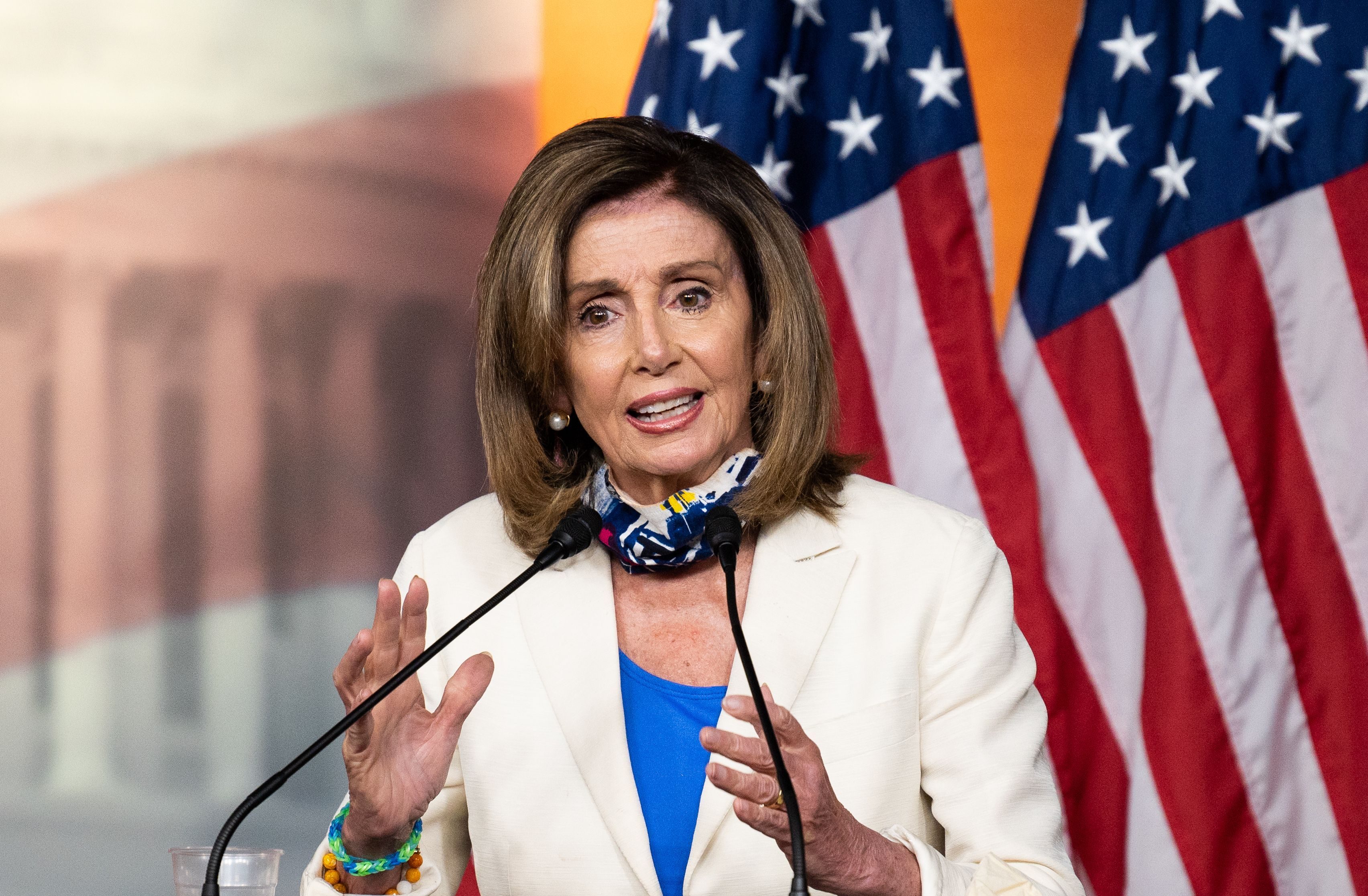 Pelosi has high expectations Republicans will be able to meet negotiations, with top officials say Americans can start receiving stimulus checks as soon as next week should a deal be struck by tomorrow.

"We have said to them, we are ready to compromise. We know our first offer is not something they would not necessarily accept because frankly, we do not share values," Pelosi said during the briefing, using the pandemic as a dividing line between Democrats who want to aid Americans and Republicans who want to aid corporations.

"So we can't wait until September 30. I know some have said well people will die. Well, 77,000 have died since this bill. So we've said to them, we're here, come to two trillion, let's sit down and divide how we would spend that," she said.

"But as a practical matter, where do we find common ground? So Leader Schumer and I said we'll come down a trillion if you come up a trillion. We'll meet you halfway," she continued as she pointed to a chart displaying both the Republicans' and Democrats' plans for how they would divide spending their individual stimulus packages.

When asked if Americans can wait for negotiations, Pelosi responded the HEROES Act was proposed more than three months ago. "Well first of all let me just say we passed the bill over 90 days ago. It took them until two weeks to come back with a meager piecemeal bill that they put forth."

"They said 'oh yall work better up against a deadline.' No, the virus doesn't have a deadline and nor does it take a pause," the said, putting on a slight southern accent in imitation of Senate Majority Leader Mitch McConnell. "The American people don't want this uncertainty and you're always there to give certainty to the markets, let's give some certainty to America's working families."

"They called yesterday and said do you have more money– the needs of the American people are not changing," she said, referencing Republicans' call for negotiations. "They're only getting more so, they're not lessening."

Pelosi continued railing on Republicans, telling reporters "Perhaps you mistook them for somebody who gave a damn," she said when asked why the Republican side has been unwilling to budge "Unless they see the reality of what it means in the lives of the American people, what good is it for us to agree to something that has no relationship to meeting the demands of the American people?"

When asked when she would be speaking with Mnuchin next, Pelosi responded: "I don't know, when they come in with $2 trillion."

As she was departing, a reporter asked the speaker if a package below $2 trillion would be passed. She did not respond.

Only, Pelosi, resume, stimul, will
You may also like: