Photos of WWII heroes found in a shoebox in an attic

A fearless World War Two airman’s personal effects have been discovered in a shoebox – and they include a charming set of photos of his wartime service.

As a tail gunner, he sat in a tiny glass turret at the rear of Lancaster and Halifax bombers which put it him an extremely vulnerable position. 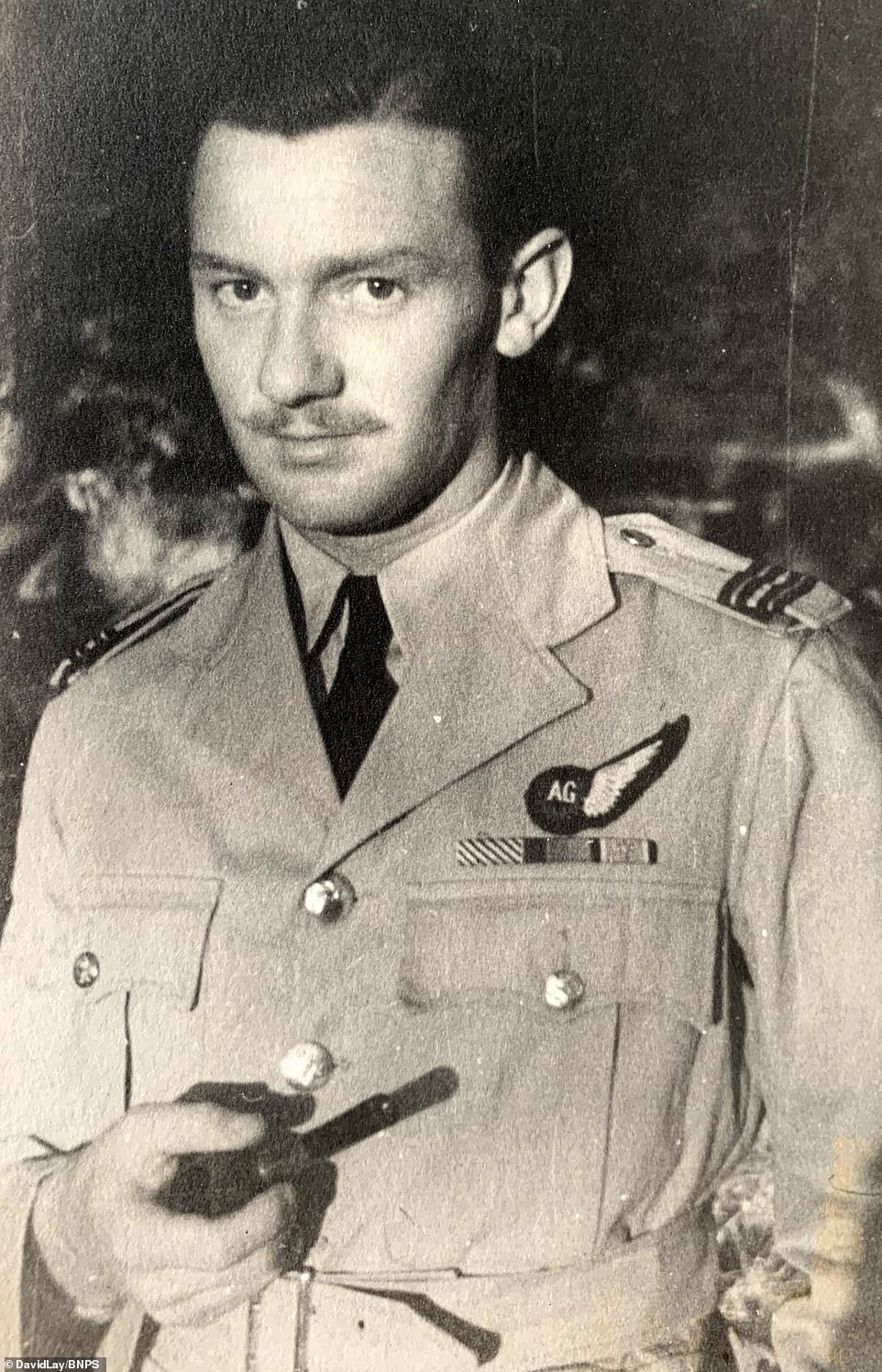 Flight Sergeant Douglas Alexander was a tail gunner during World War II and took part in nearly 40 bombing raids over Germany. He was awarded Distinguished Flying Medal for his service during the conflict which he kept in a shoebox in his attic alongside an array of other wartime memorabilia

For his service, Flt Sgt Alexander’s was awarded an array of medals that included the prestigious Distinguished Flying Medal, awarded for ‘exceptional valour, courage and devotion to duty’.

He also received a 1939-45 Star, Europe Star and War and Defence Medals.

He kept the prestigious commemoration in a shoebox alongside his old logbooks and photographs of the conflict.

Flt Sgt Alexander’s entire squadron posed in front of one of their Lancaster bombers with some even perched on its wings. The camarederie in the RAF during the conflict was immense as the airmen risked their lives alongside each other on every mission 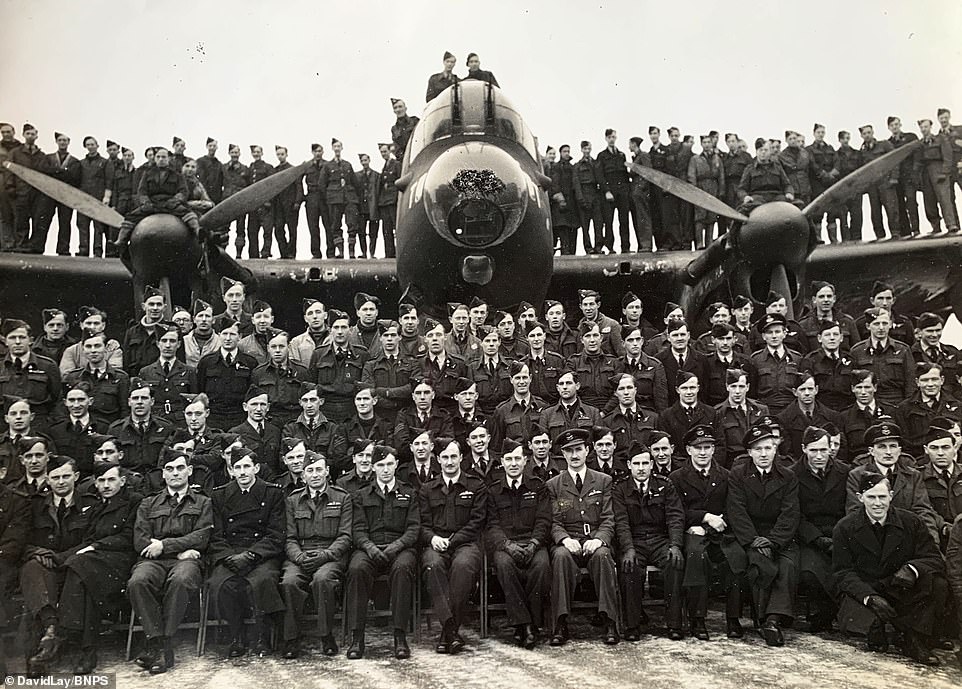 The Lancaster bombers were operated by a crew of seven which consisted of: Pilot, Bomb Aimer, Flight Engineer, Navigator, Wireless Operator, Mid Gunner and Rear Gunner. The life expectancy of a new recruit on this type of aircraft during the war was just two weeks 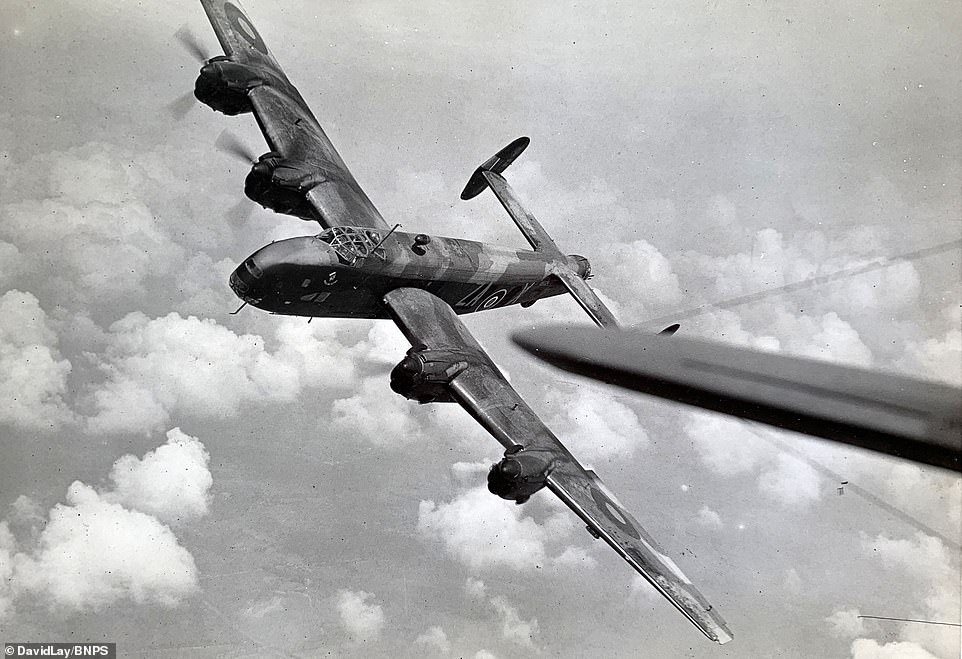 The Halifax planes shared the majority of responsibility for night bombing over Nazi Germany with the Lancaster crews. Photographed here during a raid over Europe, the Halifax dropped more than a quarter of all bombs dropped between 1941 and 1945 which totaled 231,300 tonnes

The photos capture the camarederie which existed in the RAF as the airmen risked their lives on every mission to defeat Adolf Hitler.

One of the group snaps in particular shows the whole of 460 Squadron, who were based at RAF Binbrook, Lincolnshire, in and around a Lancaster bomber with some of the men even perched on its wings.

Tragically, many of these brave men would not survive the war as 460 Squadron lost 188 aircraft and suffered 1,018 combat deaths. 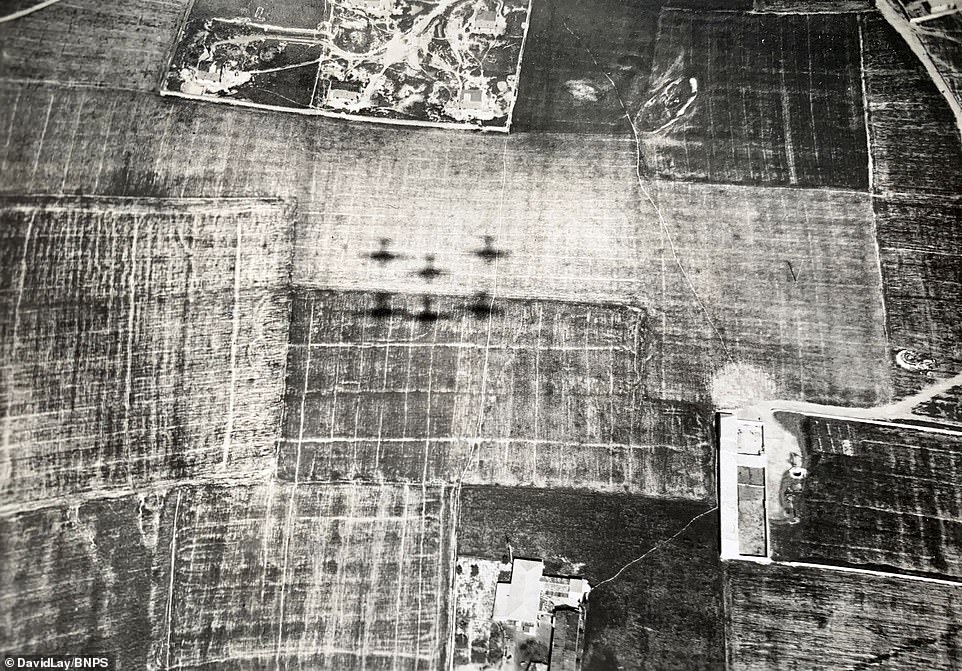 The Lancaster crews would take flight as a unit and keep in a tight defensive formation as they prepared to drop bombs over Europe. Throughout World War II the crews took part in more than 156,000 missions 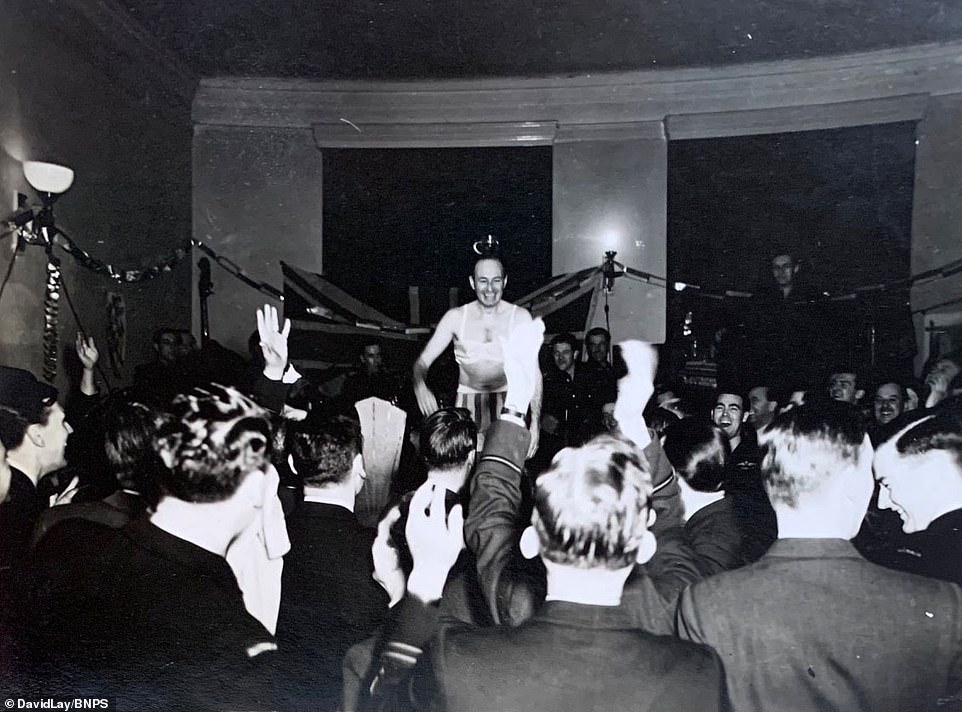 The boisterous fun between raids in the RAF Mess Hall allowed for temporary relief from the dangers the crews faced when they took to the skies. Almost half of the Lancaster crews never returned home 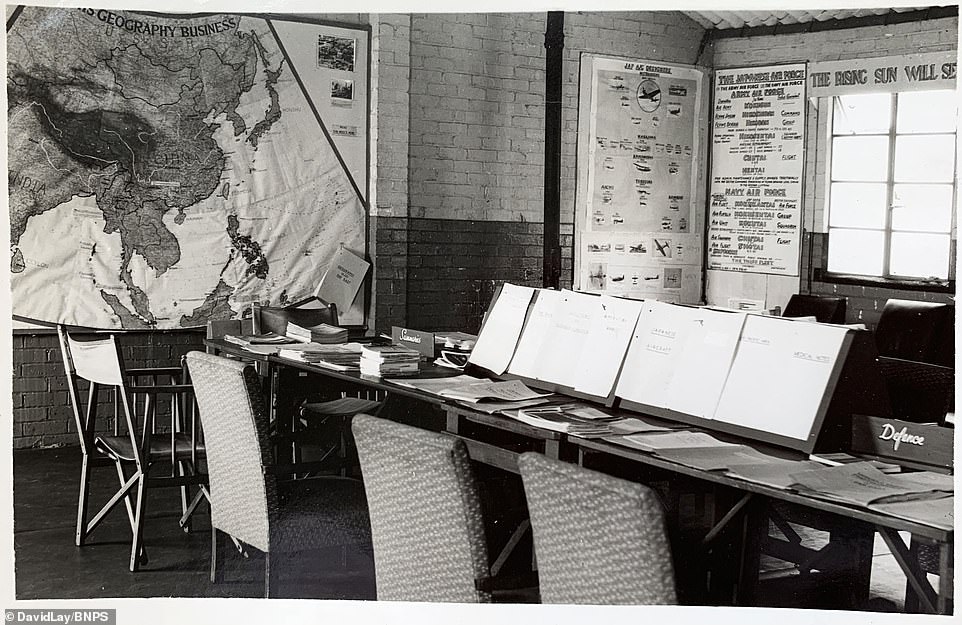 The Operations Room was the hub of RAF intelligence at the Lincolnshire base. It was decked out with maps and information packs which aided discussions of strategy

Yet, despite the horrors of their predicament, Flt Sgt Alexander always seemed to have a smile on his face as he and his crew horsed around together.

The photos capture the crew both on and off duty. Some are photos of the men drink in hand letting their hair down, and one of a fellow airman on stage in a bra at a raucous mess party.

The archive is expected to fetch more than £3,000. 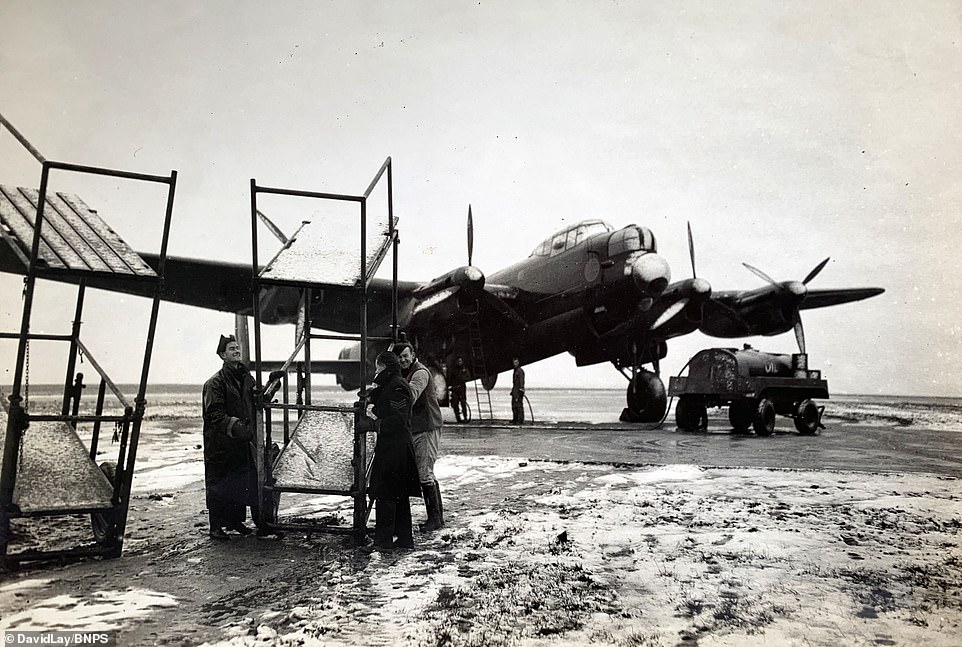 The crews had to prepare the Lancaster bombers for raids in all weathers, even in the snow. It had to be checked over, reloaded and refuelled before it could take flight again 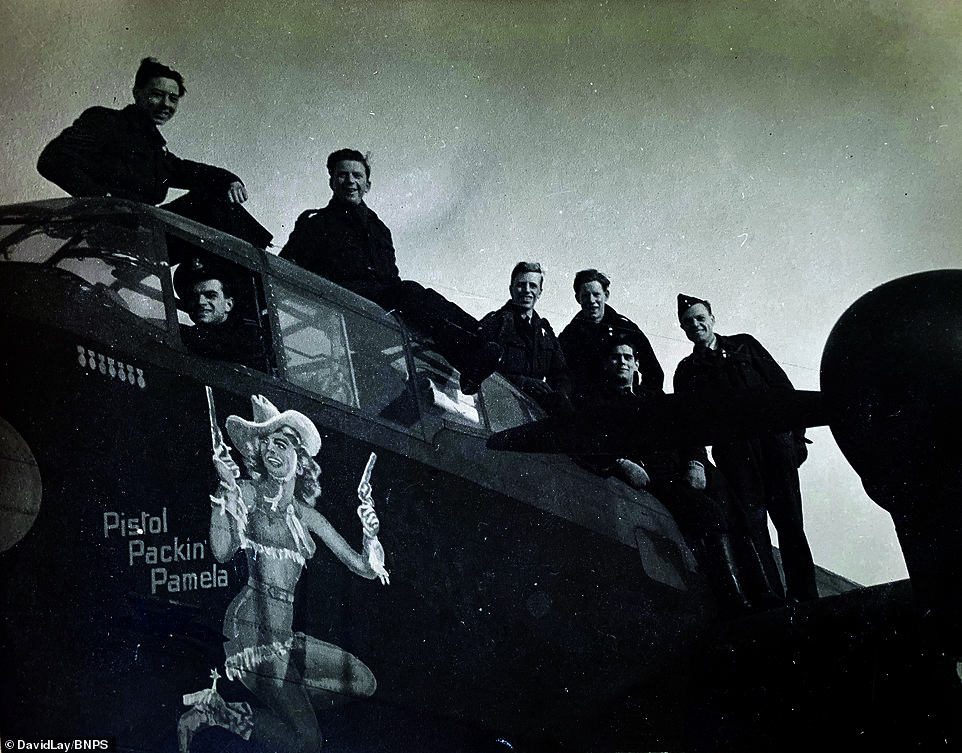 ‘Pistol Packin Pamela’: Some of the crews adopted the American habit of naming their aircrafts as well as often decorating them with pictures too in order to boost morale 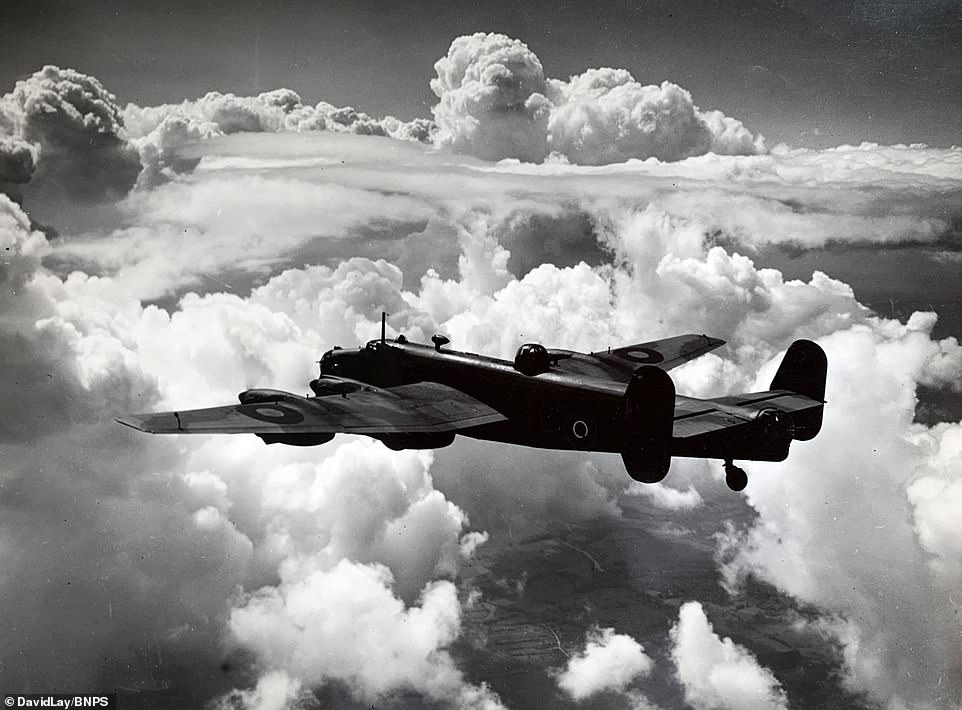 The Lancaster bomber flying over Europe to complete a raid. The planes had a wing span of 102ft and could travel at speeds up to 280mph

Mimi Connell-Lay, of the auction house, said: ‘One of the fabulous things about working at an auction house is the occasions when an unpromising looking old shoebox conceals fascinating treasures.

‘The box contains the war medals of her father and lots of related photographs, maps and other paperwork.

‘They tell a story of Second World War heroes and their derring-do in the RAF. 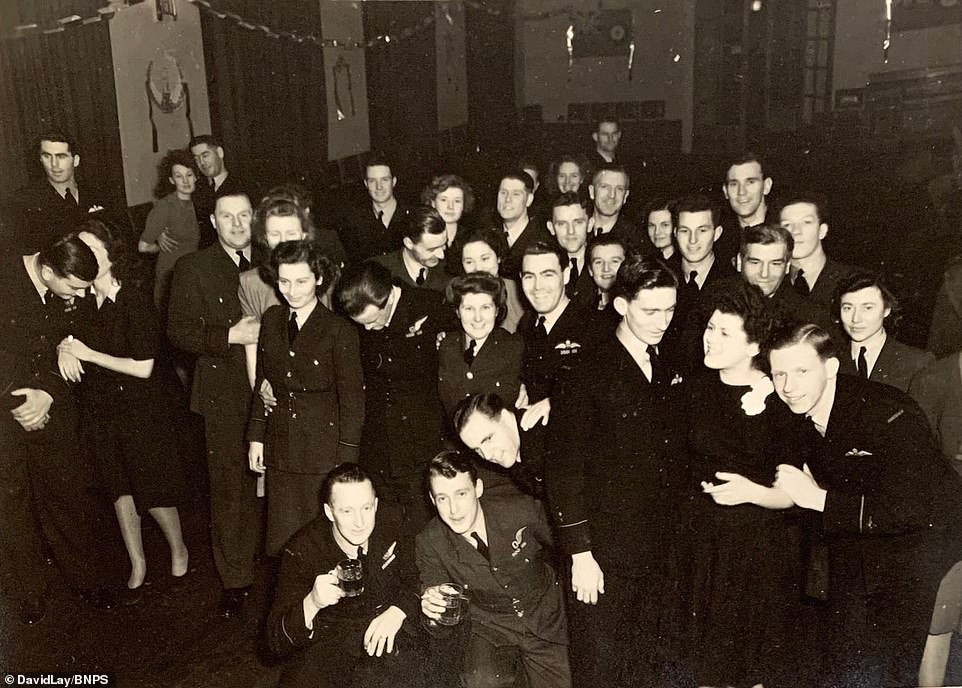 High jinks in between raids were held for men and women based at the RAF base. By 1945 a quarter of a million women had served in the Women’s Auxiliary Air Force in over 110 different trades, supporting operations around the world 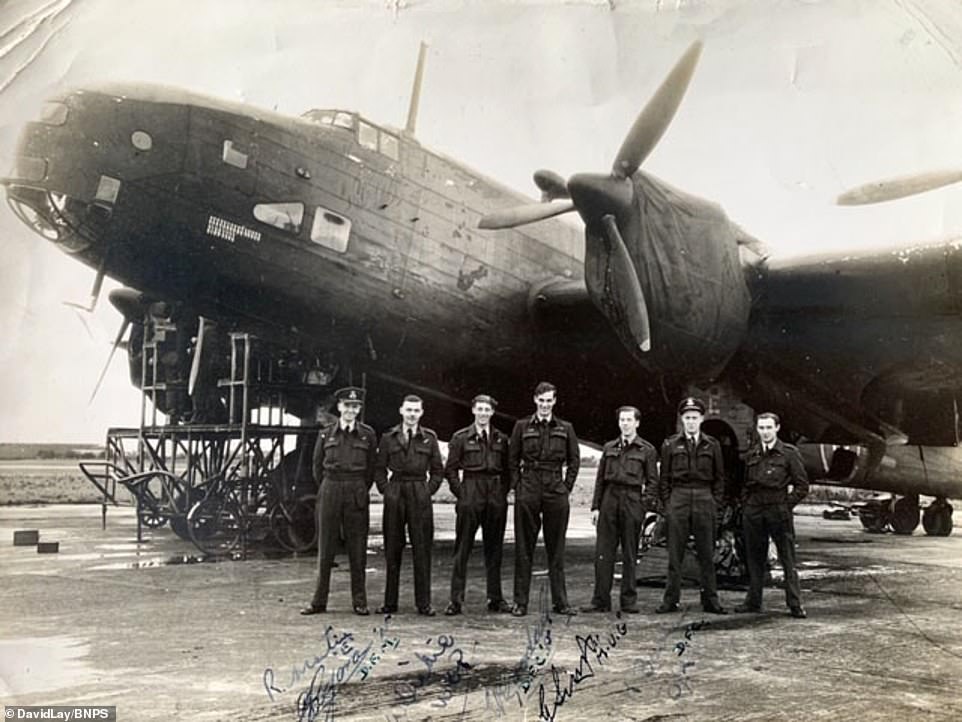 Flight Sergeant Douglas Alexander with his crew mates in front of a Halifax heavy bomber. They marked out a tally of 23 on the fuselage to keep track of how many raids they had completed 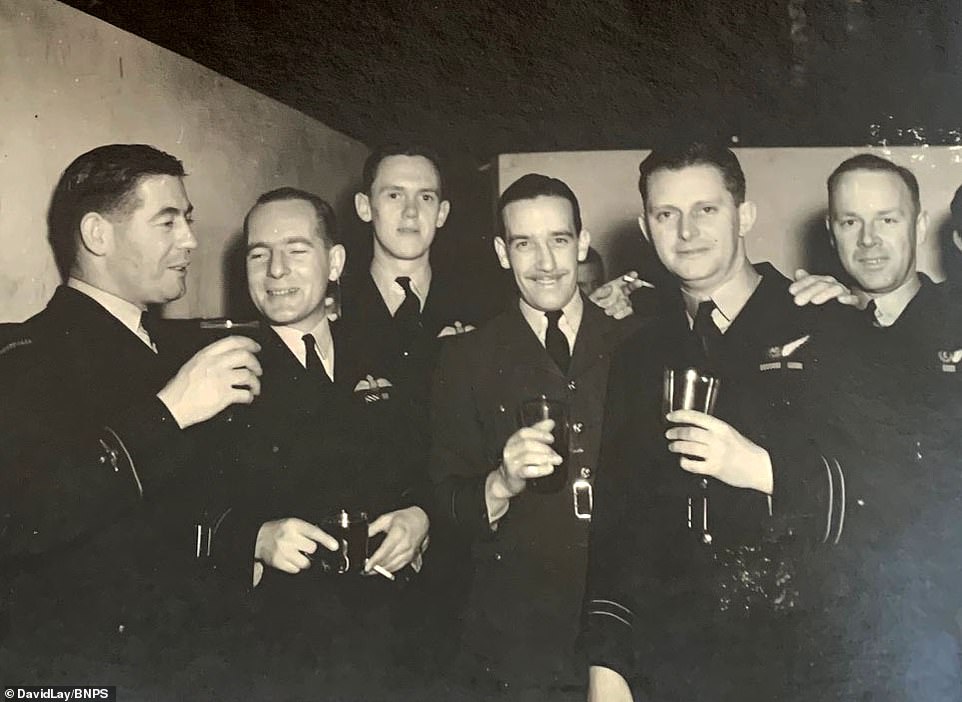 ‘Some of the most fantastic photos amongst the items are of 460 Squadron, particularly the entire squadron standing on the wings and around a Lancaster bomber and Douglas and his crew posing with aircraft or generally horsing around together.

‘Despite the perilous nature of their daily lives, these crewmen always seem to be wearing beaming smiles in all these pictures.

‘I think it’s difficult to imagine what life was like for people who, every time they went up they knew it might be their last day, so every opportunity for fun was grasped. 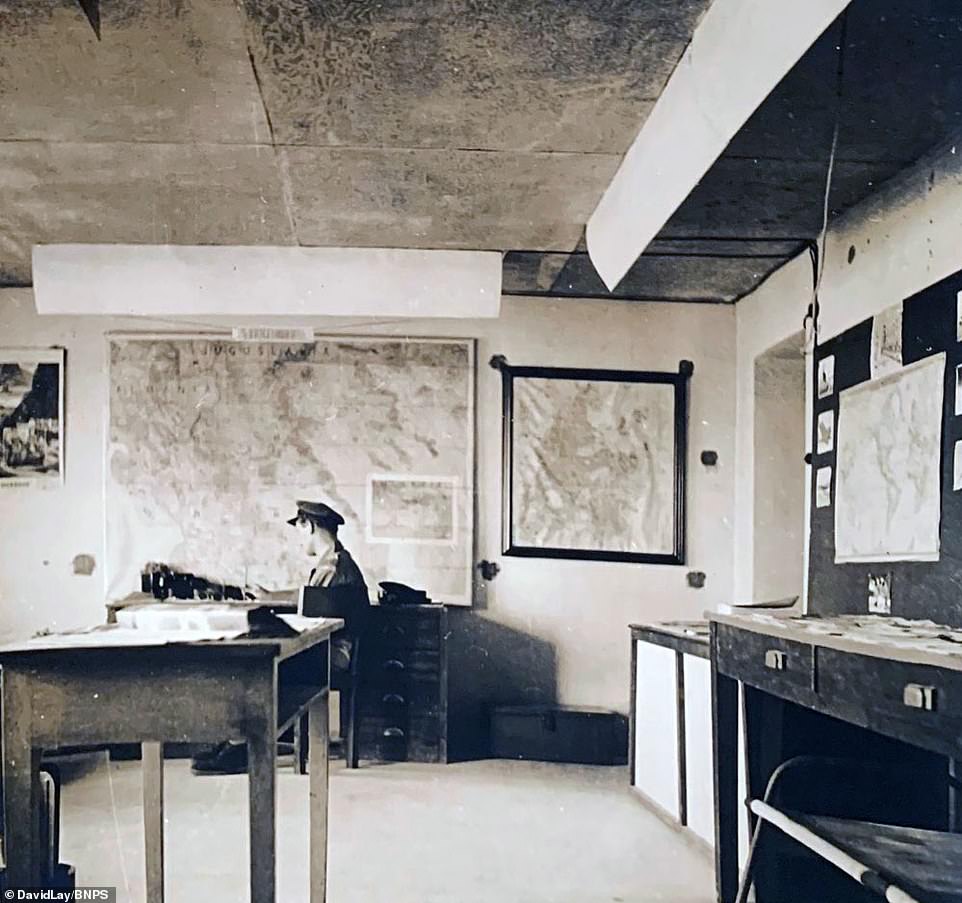 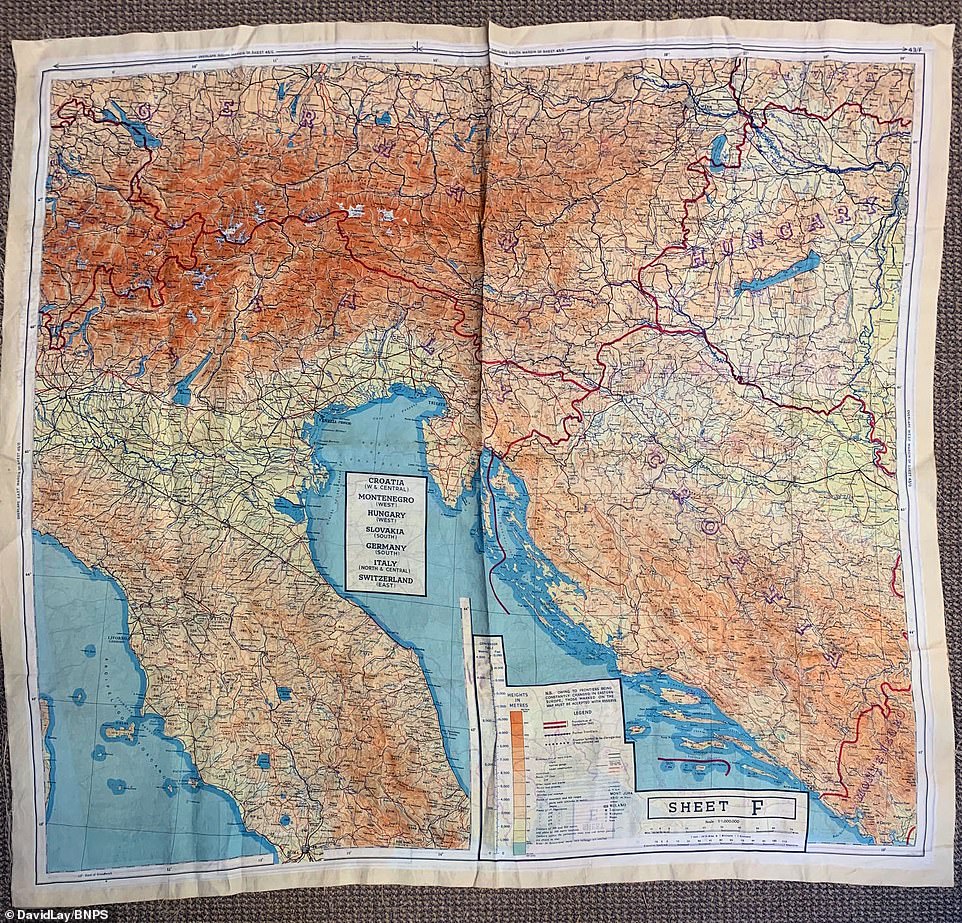 Colourised silk maps of southern Europe were also found in the flight sergeant’s shoebox. The United States and Great Britain produced in excess of 3.5 million silk maps and cloth maps during WWII 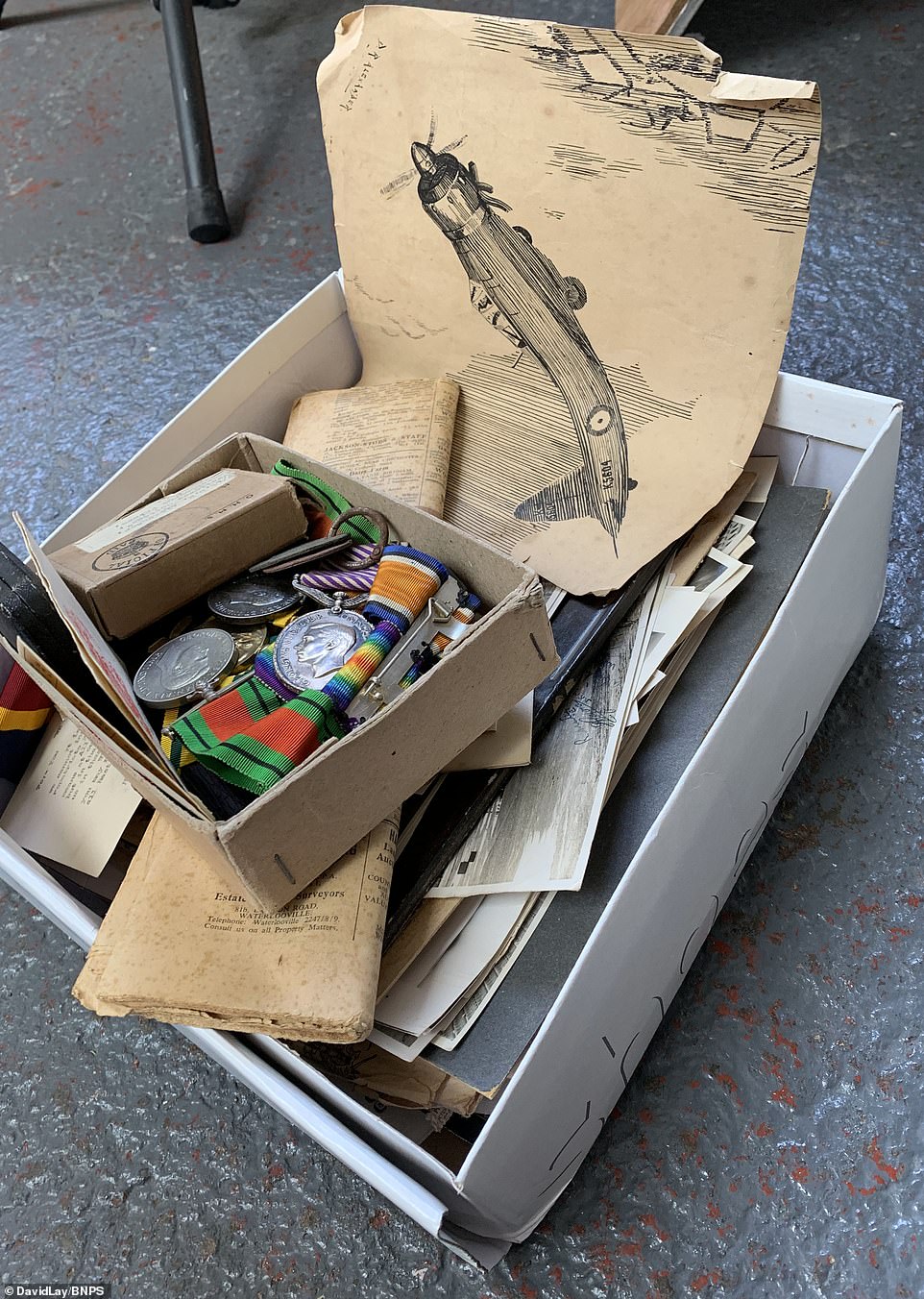 The shoebox contained a whole host of World War Two memorabilia collected by the flight sergeant affectionately known as a ‘Tail-end Charlie’. The archive was taken to an auctioneer by his daughter and it is expected to sell for over £3,000

‘If you look at the incredible losses incurred by 460 Squadron and their bombing work load, I think it’s wonderful how cheerful they all look.’

Flt Sgt Alexander was an auction house apprentice in his home city of Winchester, Hants, before enlisting in the RAF in 1942, initially serving with 10 Squadron.

He received his Distinguished Flying Medal for his actions during three separate sorties – attacks made by troops as they were coming out from a position of defence – over Aachen, Leverkusen and Nuremburg in 1943. 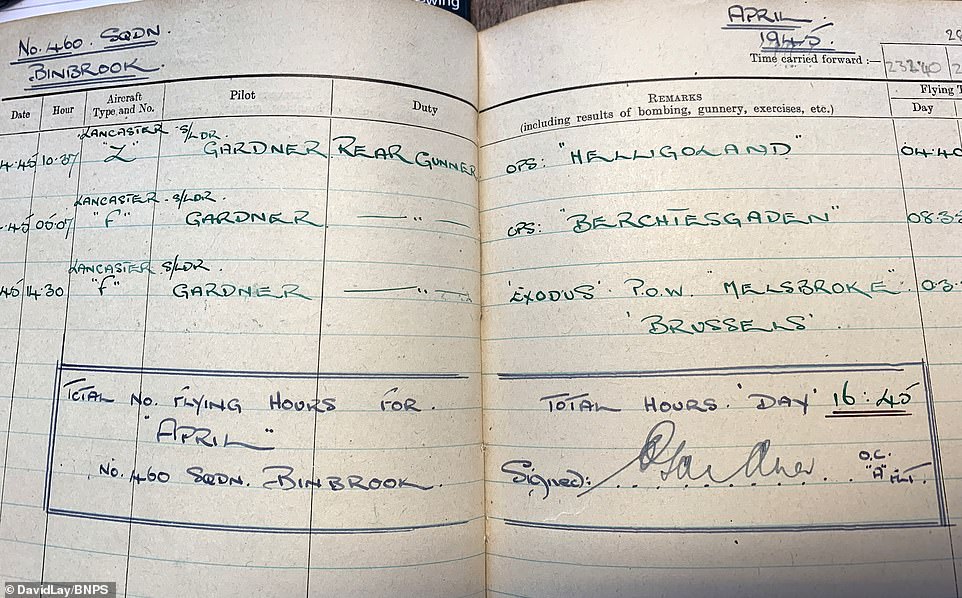 Flt Sgt Alexander kept detailed logs of all the raids he took part in, making a record of the location, the times as well as extra details that were memorable about each flight 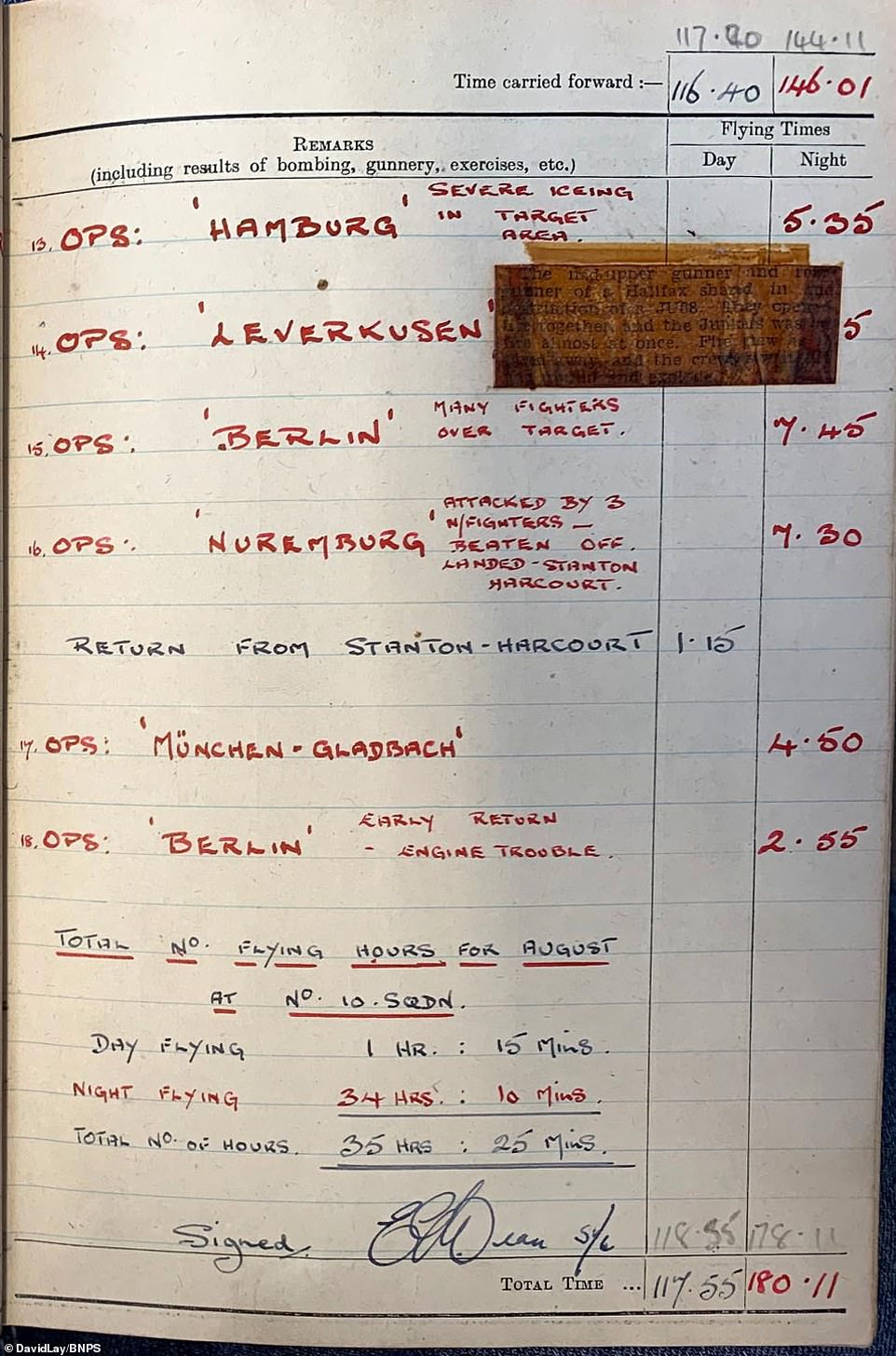 He recorded that he committed a total of 35 hours and 25 minutes in the air during August alone, most of which took place throughout the night

Flt Sgt Alexander joined the RAF in 1942 when he was still just a boy.  When he was awarded the Distinguished Flying Medal it was recorded in his local newspaper

During these raids, his crew had to contend with engine failure as well as an attack from three German fighters.

His logbook downplayed the drama on the Nuremburg raid, stating simply: ‘Attacked by 3 fighters – beaten off.’

His citation read: ‘Despite these many trying experiences, this airman has continued to show undiminished ardour for operational flying, consistently displaying fearlessness in the face of the enemy and a great devotion to duty.’ 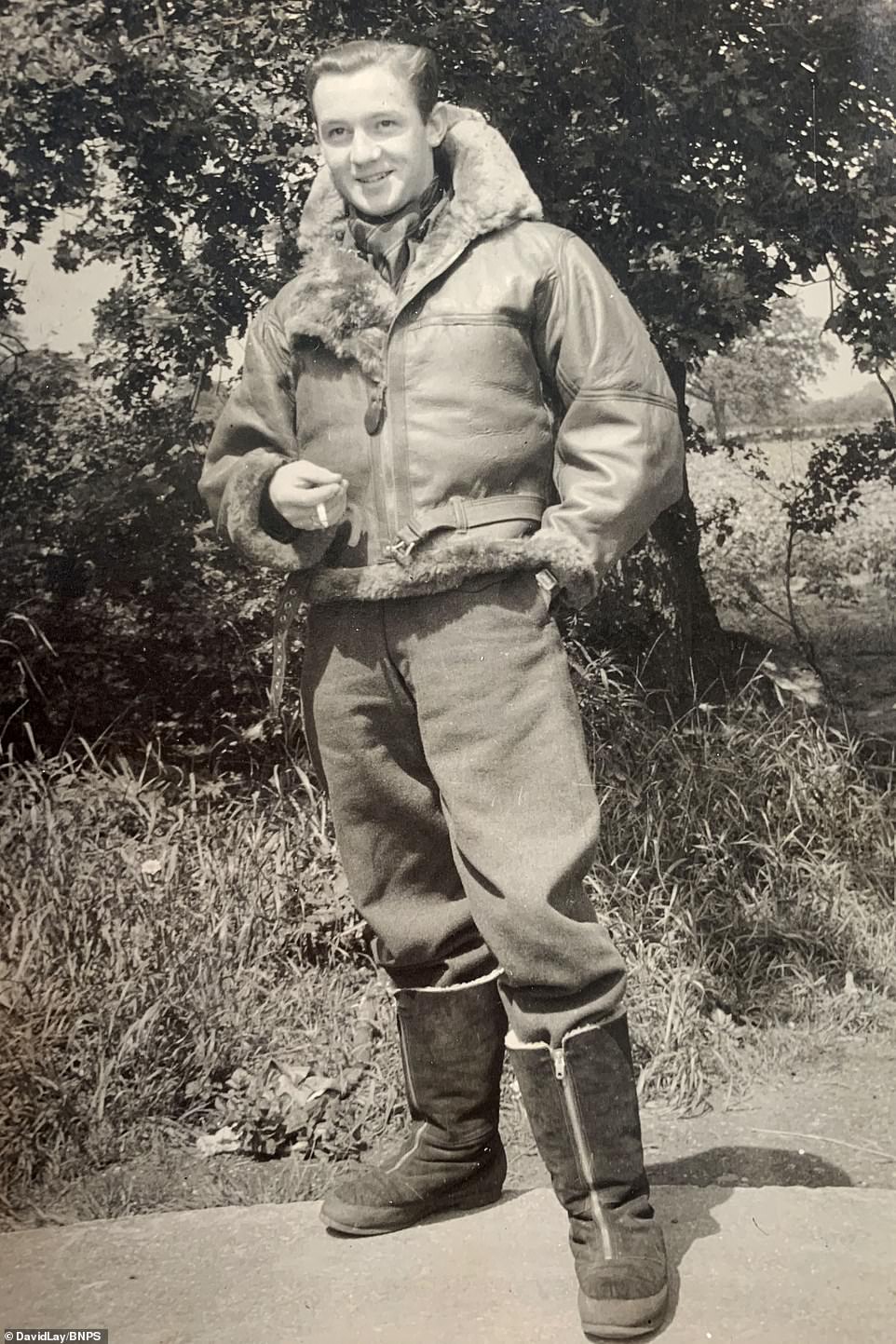 Flt Sgt Alexander transferred to 460 Squadron, a multinational squadron with many Australians, in December 1944, participating in the Berchtesgaden raid on April 25, 1945.

As well as taking part in missions during the conflict, he also worked as a flying instructor.

After the war, he worked as a structural engineer but died in 2003 aged 80. 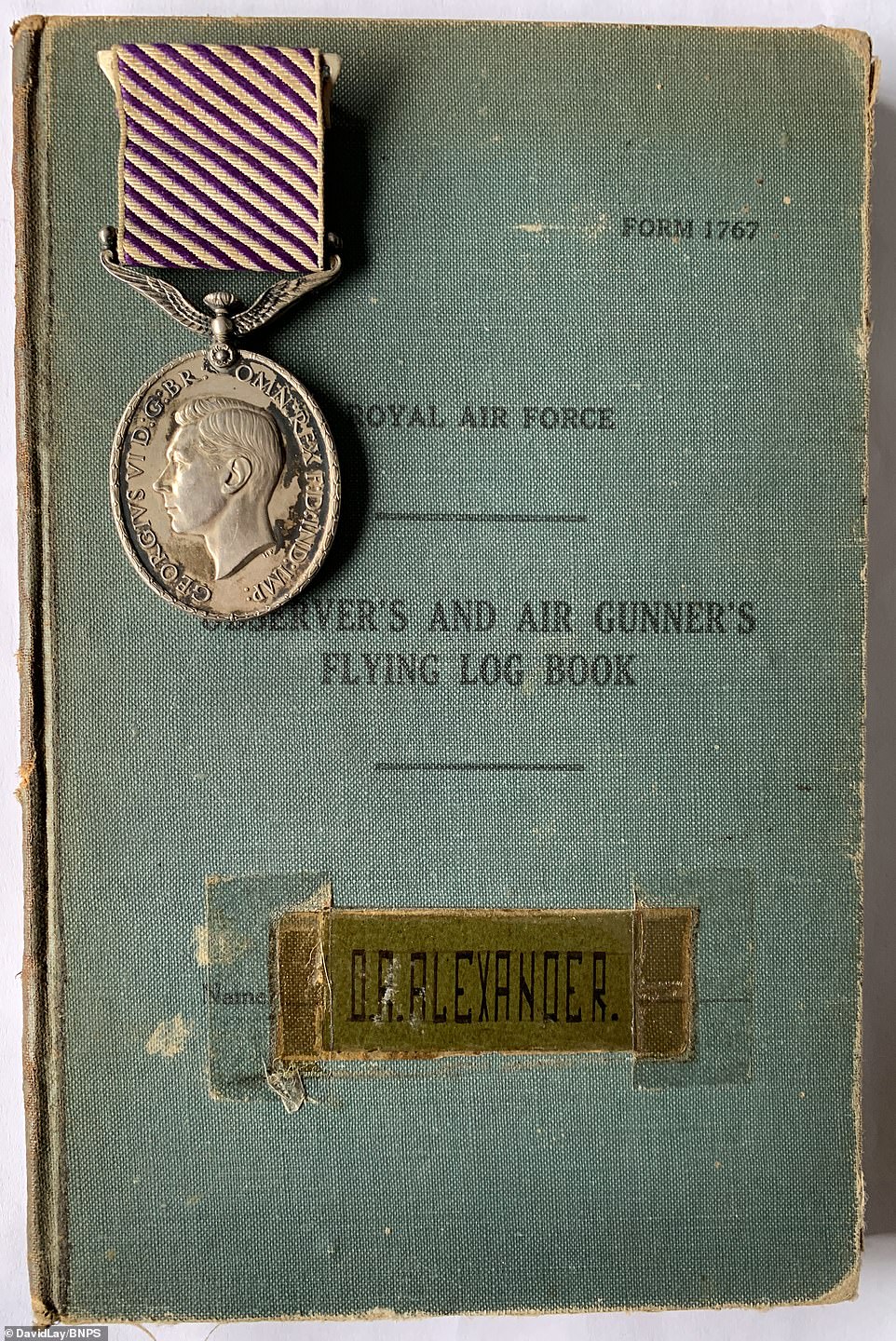 Flight Sergeant Douglas Alexander took great efforts to preserve his memories of the war which will go on sale on August 13 at an auctioneers in Penzance, Cornwall

The prestigious Distinguished Flying Medal was first awarded to in 1918 for ‘exceptional valour, courage and devotion to duty’. It is estimated that over 6,500 of these medals were given out during WWII

WHAT WAS HITLER’S BERCHTESGADEN RETREAT?

Berchtesgaden is a German town situated in the Alps on the Austrian border.

During WWII, it was considered an important target to the Allies because it was was home to Adolf Hitler’s famous retreat, the Eagle’s Nest.

Although he only visited the Berghof around 17 times, it is where he planned his conquest of Europe as well as where he had hosted heads of state.

In May 1945, the town had still not been captured.

The Allies launched a devastating air raid on the town and then sent in infantry regiments to ensure Berchtesgaden’s surrender.

The Eagle’s Nest itself was never destroyed as it was too small to target.

But after the attack, control of the area was seized by French and British forces and significantly weakened the Nazi regime and its ‘prestige’.

Mark Hillier, a historian and author of books on Bomber Command, said it was very unusual for an airman to survive so many sorties.

He said: ‘460 Squadron had a very tough war because they were one of the highest casualty losses.

‘460 Squadron dropped the highest number of bombs in Bomber Command.

‘At that time of the war the Germans used night fighters to come in below and behind the bombers so the rear gunners were especially vulnerable. It was also a very lonely position.

‘They were on their own at the end of the plane cold and cramped.

‘These men said they were just doing their job but it was a lot more than that. Anyone who wasn’t scared was a liar.’

The sale of the shoebox and all its contents is set to take place on August 13.

found, Heroes, in, of, Photos, WWII
You may also like:

Greece plans a 'floating fence' in the sea to stop migrants

Mum charged over deaths of her three young children aged 3, 7 and 9 at house in Dublin

Back to the future: Crisis-era Irish party edges toward power