For cod and country! PM launches bid to smash Labour’s ‘red wall’ of Leave-voting heartlands with warning Jeremy Corbyn has ‘betrayed’ them on Brexit – but pollsters warn result is still on a knife-edge

Boris Johnson stepped up his campaign to smash Labour’s ‘red wall’ of Leave-voting heartlands as he visited Grimsby today.

The PM chatted happily with workers at a fish market in the key target seat after delivering a stark warning that Jeremy Corbyn has ‘betrayed’ Brexit supporters.

Mr Johnson laughed off boos and cheers as he posed with some of the produce, and for selfies.

The visit came as the premier embarks on a blitz of Labour’s northern heartlands, just three days before the crucial election showdown.

Another poll today suggests the Tories still have a significant advantage, with Survation research for ITV’s GMB putting the party 14 points ahead of Labour.

But experts have warned that the result is still on a knife edge, and victory for Mr Johnson will depend on him winning over voters who have not backed the Tories for generations.

Speaking to reporters today, the PM insisted he was ‘taking nothing for granted’.

‘We’re taking nothing for granted, we’re working very, very hard across the whole country and I think it’s a message of unity of bringing this amazing United Kingdom together.

‘If we can get Brexit done then we can move forward with investments in infrastructure, education and technology that will unleash opportunity across the whole country. 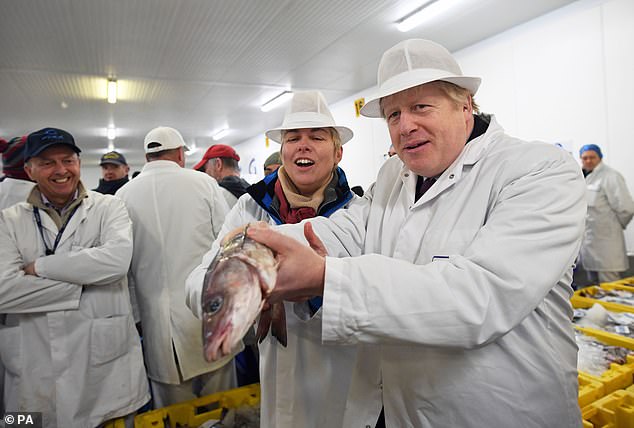 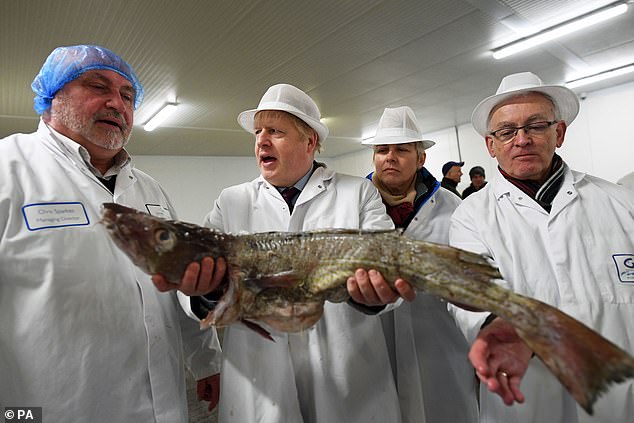 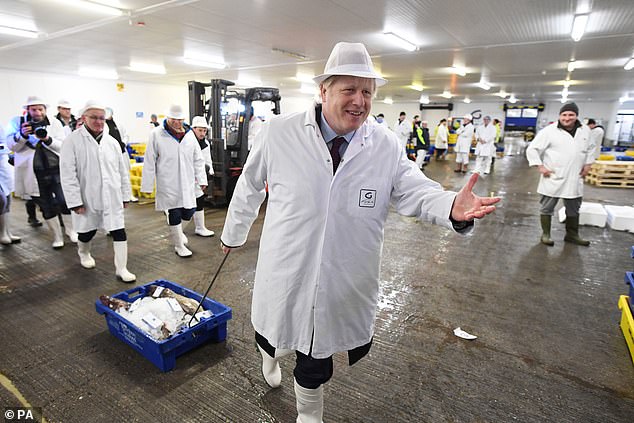 Mr Johnson laughed off boos and cheers as he posed with some of the produce, and for selfies 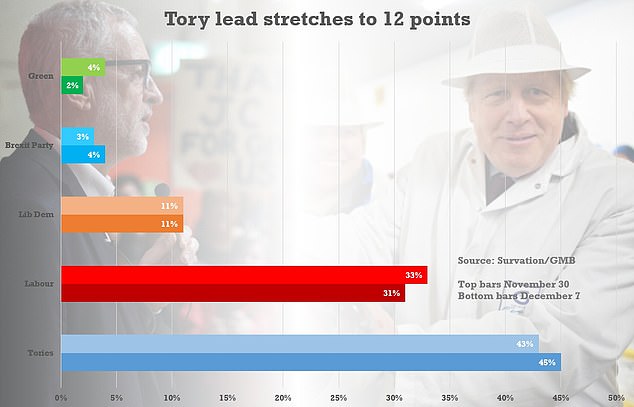 Another poll today suggests the Tories still have a significant advantage, with Survation research for ITV’s GMB putting the party 14 points ahead of Labour

On his tour today, Mr Johnson will criticise the Labour Party for sneering at their values and ignoring their core supporters.

He will accuse Mr Corbyn of sticking ‘two fingers up to the public’ as campaigning ramps up ahead of Thursday’s General Election.

Over the next 72 hours, Mr Johnson will visit every region of England and Wales, including West Yorkshire, Cheshire, Leicestershire, East Anglia, North Wales and the South West.

His aides believe these to be the areas that will decide the outcome of the election.

Mr Johnson will return to key pledges he made during the 2016 referendum campaign – including that of ending ‘uncontrolled and unlimited immigration’.

But his central message will be a condemnation of Remain-backing MPs who vowed at the last election to deliver Brexit but ‘shamefully did the exact opposite’.

‘Parliament has bent every rule and broken every convention as it has delayed, diluted and denied Brexit,’ he will say. ‘They won their seats on a false prospectus and then stuck two fingers up to the public. 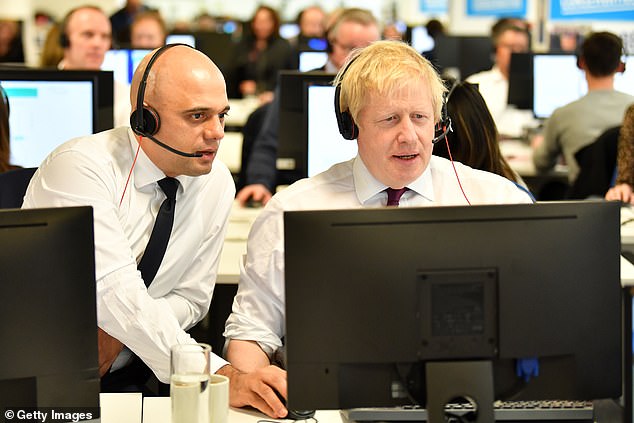 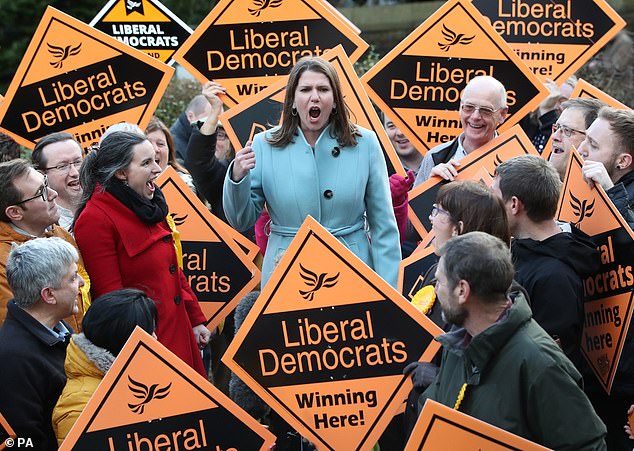 ‘Now they are proposing another referendum – this time rigging the result by extending the franchise to two million EU citizens.

‘It’s been the Great Betrayal, orchestrated from Islington by politicians who sneer at your values and ignore your votes.’

Although still ahead in the polls, Tory strategists argue the election is ‘closer than many people think’.

They said Mr Corbyn would become prime minister if the SNP and the Lib Dems pick up a handful of extra seats.

Sunderland is a Labour citadel but six in ten voters supported Leave in 2016. It was one of the earliest declarations on referendum night – and gave an early sign that many traditional Labour areas were backing Brexit.

There Mr Johnson will say: ‘It’s now been 1,264 days since Sunderland’s roar was heard on the night of 23 June 2016 – 1,264 days in which Parliament should have delivered what you voted for, taken us out of the EU, and addressed all the reasons you voted so decisively for change. 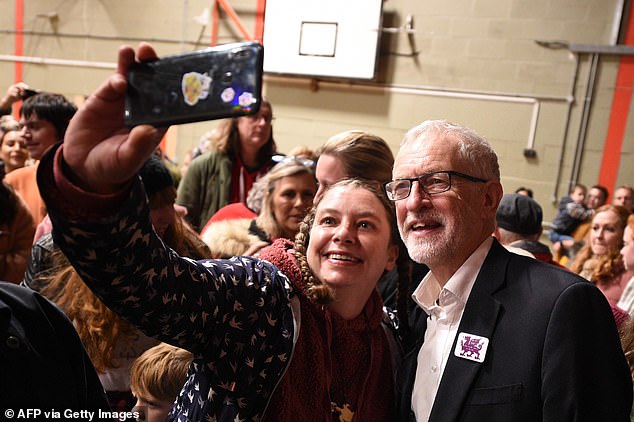 Mr Johson has warned if there is another hung parliament, Mr Corbyn (pictured at an election rally in Colwyn Bay, Wales yesterday) and Nicola Sturgeon will ‘conspire to frustrate Brexit’

‘You voted to leave the EU because you wanted to stop sending the EU money we could spend at home, to end uncontrolled and unlimited immigration from the EU, to take back control from an unelected elite in Brussels – and to force politicians in Westminster to listen to you, not just London and the South East.

‘Instead we have had 1,264 days of dither and delay, prevarication and procrastination, obfuscation and obstruction.’

The Prime Minister is trying to storm a ‘Red Wall’ of around 80 constituencies – stretching from North Wales to Yorkshire – that have voted Labour for decades.

He will warn that if there is another hung parliament, Mr Corbyn and Miss Sturgeon will ‘conspire to frustrate Brexit again’.

In the South West, where he will end the day, he will warn that voting for the Liberal Democrats is a vote for ‘further paralysis and delay’ and will help Labour win the keys to Downing Street.

Labour would not ‘turn their backs’ on the SNP in the event it formed a minority government, Miss Sturgeon said yesterday.

The Scottish first minister said Mr Corbyn would need the support of another party to implement its policies and the SNP was willing to step in – on certain conditions.

She said she did not believe Shadow Chancellor John McDonnell’s insistence that Labour would go it alone – ‘no negotiation, no deals, no coalition’.

Nigel Farage suggested yesterday that his Brexit Party could be transformed into the ‘Reform Party’ if the UK leaves the EU.

He said he had already registered the name in a move ‘to campaign to change politics for good’. 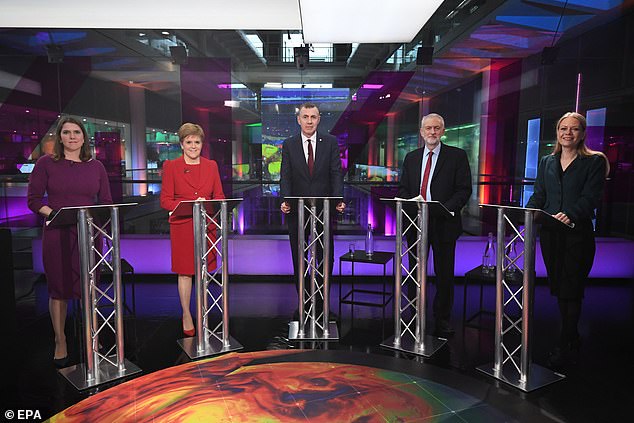 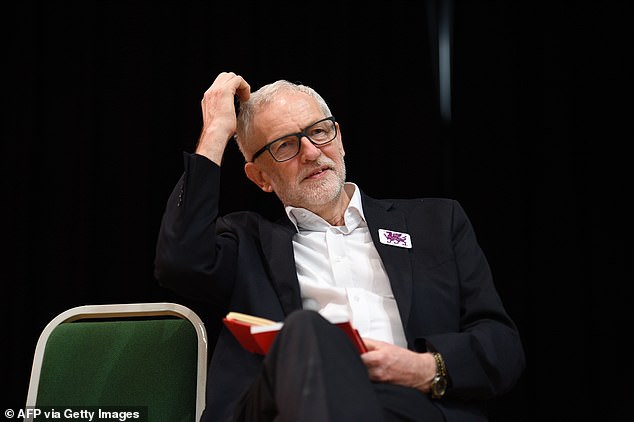 The Observer condemned Mr Corbyn’s ‘disgraceful anti-Semitism crisis’ and said he had ‘displayed a staggering lack of contrition or empathy’. Here he is photographed attending a rally campaigning for the general election in Llanfairfechan, north-west Wales, earlier today

The new party would work to abolish the House of Lords and seek a proportional voting system. Asked what would happen to his party after Brexit, Mr Farage told Sky News: ‘It’ll have to reform into the Reform Party, it’ll have to campaign to change politics for good.’

Asked about Thursday’s poll, he predicted ‘a turnout much lower than the pundits expect because people have lost faith in politics’.

The Left-wing Sunday newspaper condemned Mr Corbyn’s ‘disgraceful anti-Semitism crisis’ and said he had ‘displayed a staggering lack of contrition or empathy’.

The editorial urged readers to vote ‘as their conscience allows’ for a ‘pro-referendum, progressive candidate’ who is most likely to lead to the Conservatives’ defeat.

Its stance comes after Left-wing weekly the New Statesman also refused to endorse Mr Corbyn last week and branded him ‘unfit to be prime minister’.

With three days to go until the election on Thursday, the polls tightened – putting the Tories on course for a 14-seat majority.

Fears were also growing that a tactical voting campaign could cost Boris Johnson his majority after Remainer groups said just 41,000 voters could swing the election.

The Savanta ComRes poll for The Sunday Telegraph now shows the Tories on a similar figure to where they were at the start of the campaign.

Left-wing activists have launched a campaign called ‘Votey McVoteface’ to oust Boris Johnson and other Tories from marginal seats by calling on canal boat owners to vote tactically.

The drive, named after a failed bid to name an exploration ship Boaty McBoatface, had urged people to register if they had ever moored in the PM’s West London seat of Uxbridge and South Ruislip.

It is funded by the Joseph Rowntree Reform Trust, whose website says it has given the group £12,922.

Those without a fixed abode still have a right to vote as well as those who live on a boat. Messages on the site suggest the group is in touch with Labour, the Sunday Times reported.

The group’s Facebook page calls for people to ‘support the parties which are most likely to get the Tories out’, whether or not the person lives there.

The poll puts the Tories on 41 per cent and Labour on 33 per cent, matching a Telegraph poll published at the beginning of the campaign.

The Tories have dropped by one point and Labour have gained a point since an earlier survey published by the paper last week.

The Liberal Democrats remained on 12 per cent and the Brexit Party’s support stayed steady at 3 per cent.

Insiders have identified the main danger to the Tories as T’n’T – which stands for ‘turnout and tactical voting’ and could tip the balance by more than 30 seats. It came as a report claimed that Mr Johnson would be denied a majority if just 41,000 people voted tactically in 36 seats.

Today, pro-Remain group Best for Britain will launch a report showing that tactical voting could swing the election if an average of just 1,131 Remainers in each of the 36 seats switched their vote.

Its survey of almost 30,000 voters found the Conservatives are on course to win 345 seats in the House of Commons, giving Johnson a majority of 40.

However, analysis for the group – which is campaigning for a second EU referendum – found that in 36 seats the Tory candidate could be defeated if 2,500 or fewer Remainers decided to switch their vote.

Overall, the campaign group said that as few as 40,704 pro-EU tactical votes in these seats could produce a hung parliament, which could in turn deliver a second referendum. According to the poll, Mr Johnson’s majority has been more than halved since a similar survey was conducted by Best for Britain a fortnight ago.

The campaign group said if Remainers were prepared to ‘hold their nose and vote for the party with the best chance of stopping the Tories’ then Mr Johnson could still be deprived of overall victory.

Brexit, labour, PM, S, Voters, woos
You may also like: