Police arrest more than 40 in nationwide crackdown on courier fraud

Police have arrested more than 40 suspects in a nationwide crackdown on courier fraud gangs who con vulnerable elderly people over the phone then turn up at their doorsteps to steal millions of pounds of their savings.

More than 3,000 victims in the last two years have been tricked into taking large sums of money from their bank accounts and handing it to someone posing as a courier, police officer or bank official.

Among the victims were an elderly Dorset couple who lost nearly £1million in October, including all their savings and pension, and were left with just £187 to their name. Another 74-year-old victim lost £400,000 in November. 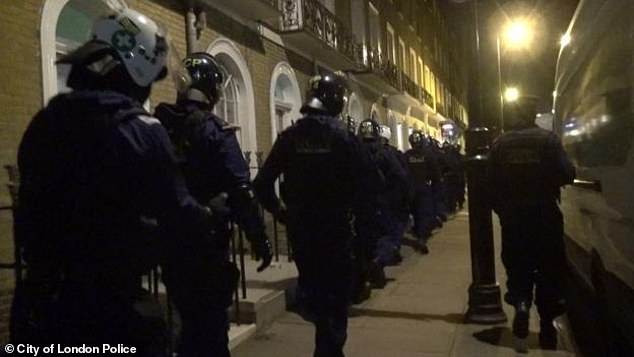 City of London Police – which leads the fight against fraud in England and Wales – launched a crackdown on courier fraud, which sees criminals con vulnerable elderly people over the phone then turn up on their doorsteps

‘Fraudsters specifically target older people by exploiting their trust in the police and their bank, to bleed them dry,’ Commander Karen Baxter of City of London Police, which heads the fight against fraud.

‘Courier fraudsters are nearly always part of broader criminal gangs: they are persuasive and can be aggressive. This can be particularly intimidating when they turn up on a victim’s doorstep.’

Courier fraud occurs when a criminal contacts victims by phone pretending to be an official, such as a bank worker or police officer, before offering easily-obtainable personal information to establish their trust.

The fraudster will then suggest a scenario, which is often that the victim has been targeted by corrupt officials and a small amount of money is needed to ‘assist’ the investigation into what happened.

A ‘courier’, often a taxi driver, will then be sent to the victim’s address to pick them up and collect their card details, or take them to a cash machine to withdraw money.

Police say there have been 3,188 over two years with a sharp rise in the past six months.

Total losses have amounted to more than £12million – although this will be an underestimate as this type of fraud is ‘grossly under-reported’, according to police. 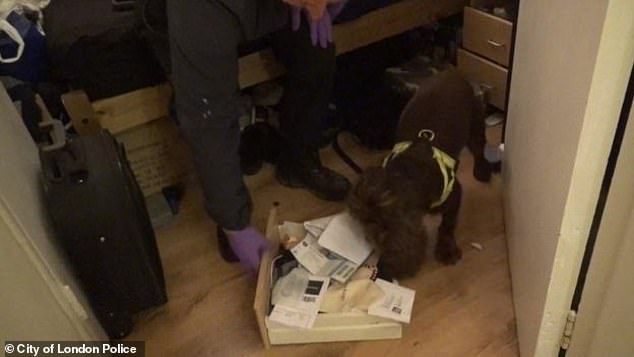 Officers raided 18 premises and seized large amounts of cash, as well as other goods such as stolen bank cards and passports. Pictured is a sniffer dog on one of the raids 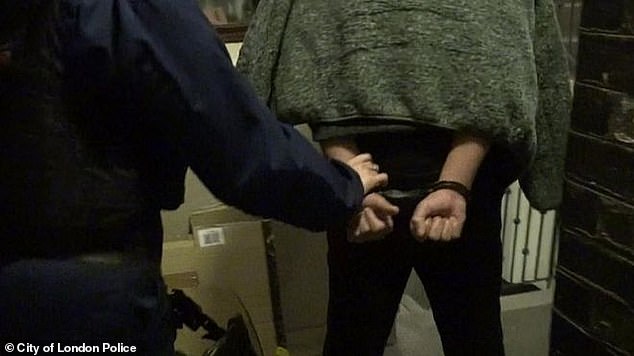 As part of a national crackdown led by City of London Police and involving all 43 police forces in England and Wales, officers raided 18 premises and made 44 arrests, with 14 people charged and two already pleading guilty.

Pensioner Carol Norton told the BBC in January how fraudsters stole £4,000 from her and her dying husband after posing as police officers.

She received a phone call from the ‘chief fraud officer’ at the local police station, who said someone at her bank branch had used her card details to try and spend £600.

They persuaded her to withdraw £4,000 in cash from the branch to ‘help the investigation’, before sending a taxi driver round to pick it up. 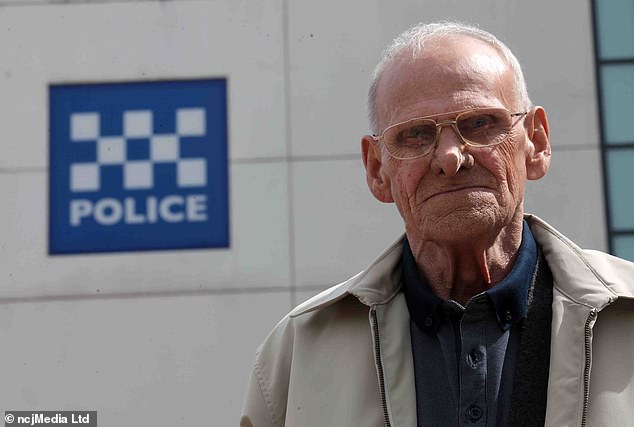 Sunderland pensioner Edward Gibson, 80, was told by a fraudster posing as a bank official that he was due £3,600 in overpaid bank charges – but would have to pay £200 in solicitor’s fees before receiving the money

What is courier fraud and what tricks do criminals use to persuade victims to hand over cash?

Courier fraud sees criminals contacting a victim by phone pretending to be an official, such as a bank worker or police officer, before offering easily-obtainable personal information to establish their trust.

The caller may also offer a telephone number for the victim to phone to check that they are genuine. Either this number will be fake or, if it is genuine, the fraudster will stay on the line and pass the victim to a different individual.

After some trust has been established, the fraudster will suggest a number of scenarios, such as:

Victims are then asked to co-operate in an investigation by attending their bank and withdrawing money before handing it to a courier, often a taxi driver.

At the time of handover, victims are promised the money they’ve handed over or spent will be reimbursed but in reality there is no further contact and the money is never seen again.

Another recent victim was Sunderland pensioner Edward Gibson, 80, who was told by a fraudster posing as a bank official that he was due £3,600 in overpaid bank charges – but would have to pay £200 in solicitor’s fees before receiving the money.

Mr Gibson was told he needed to buy four £50 gift vouchers to cover the money, but grew suspicious and alerted police.

In 2013, judges jailed two brothers for a total of ten years after they masterminded a £244,000 fraud from their council house by persuading victims to hand over their PIN numbers before sending a taxi driver to pick up their bank cards.

Shilu Miah, 31, and his sibling Dulu Miah, 26, fleeced 218 accounts and spent most of the cash on luxury holidays, cars and designer clothes, including Louis Vuitton flip flops ‘ to the tune of £1,000 a pair’.

The brothers also went on shopping sprees at Selfridges and Harrods as well as drinking champagne at nightclubs in London’s West End, Blackfriars Crown Court heard.