A serial sex fiend who waged a campaign of terror in a suburban market town was freed to strike seven more times after police missed three chances to catch him.

Married businessman Jason Bursk, 50, led a secret double life as a nighttime prowler who broke into the homes of women and young girls to attack them while they slept.

Minshull Street Crown Court heard detectives in Radcliffe, near Bury, Greater Manchester, could have stopped him as long ago as 2012 after he sexually assaulted a girl aged nine in her own bed.

But while it was reported at the time and father-of-three Bursk arrested, Greater Manchester Police decided there was not enough evidence to charge him and failed to take a DNA sample.

Later he attempted to break into properties to attack the occupants and was again reported – but police dismissed them as a drunk trying to get into the wrong house.

Bursk, who ran a taxi firm with his wife of 20 years, went on to claimed other victims over the next seven years, including a 78-year old woman who woke up to find him in his bedroom and a girl aged just eight whom he tried to rape in her bed. 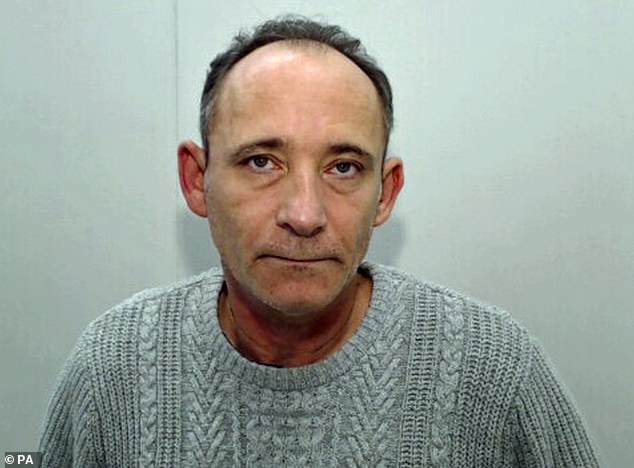 Jason Bursk, 50, could have been stopped three times but escaped justice to attack more

He was only caught in November last year after police publicised CCTV pictures of him fleeing the scene of the attack on the eight year old whilst adjusting his belt and trousers.

His first victim, now 18, came forward after seeing the CCTV picture in a local newspaper and recognised Bursk. She was said to have ‘felt guilty he had gone on to attack other people.’ Police have since been criticised in an internal review.

At Minshull Street Crown Court, Manchester, Bursk a former Israeli army soldier of Radcliffe was jailed for 15 years after after he admitted trespass with intent to commit a sexual offence, attempted trespass, sexual assault of a child and attempted rape between January 2012 and November 2019.

The court heard the first victim had been on a sleepover at Bursk’s home when he crept into her room, stripped her and said: ‘come to my bed’ and took photographs. Police were alerted but took no further action for undisclosed reasons.

In November 2018 a 78-year-old woman woke up in her bedroom at 2.20am to find Bursk standing over her. He gripped her arms and as she screamed placed his hand over her mouth then molested her before fleeing via a patio door. She later had to move to a care home.

In April last year as police hunted the old lady’s attacker, Bursk got inside a family house and went into a child’s bedroom only to flee when the pet dogs began to bark. The child’s mother put CCTV footage of Bursk on social media and a neighbour said he had been trying to get into her home, but police regarded it as a drunk who had got the wrong house. 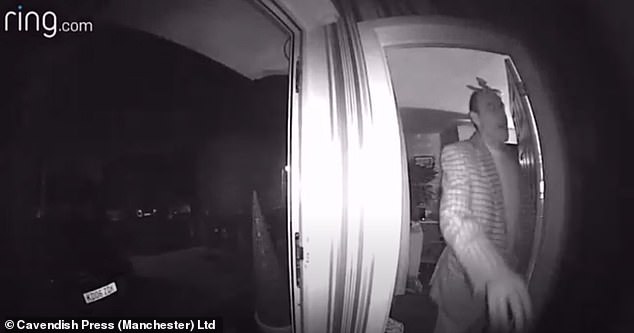 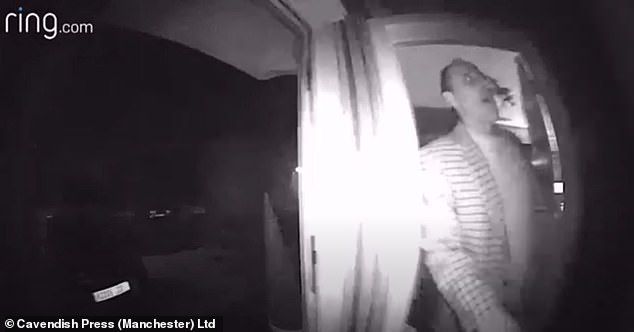 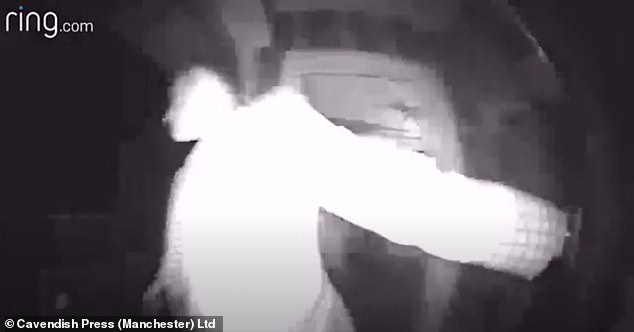 The following July, Bursk targeted another house where a mother and her two children aged 12 and 13 were sleeping but fled.

One victim who was at home with her husband and four children woke up to find Bursk loitering outside their home and challenged him before he walked away.

The husband followed Bursk and recorded him on his mobile phone as the attacker tried to enter another house.

But he responded by mocking him and the police’s likely response to what he had done. The incident was reported to police but a decision made not to pursue it.

The last attack occurred after Bursk had been eating and drinking at a Gusto restaurant with friends in Manchester city centre. He got a taxi home but was seen on CCTV stopping in front of a house and looking through the window before trying the front door.

After being unable to enter the house, he walked across the road and tried the door of another house and peered through the rear window before sneaking inside.

Andrew Ford prosecuting said: ‘A woman and a man with three young children who had been living in the area for four to five years were we home when their daughter was awoken in the middle of the night. 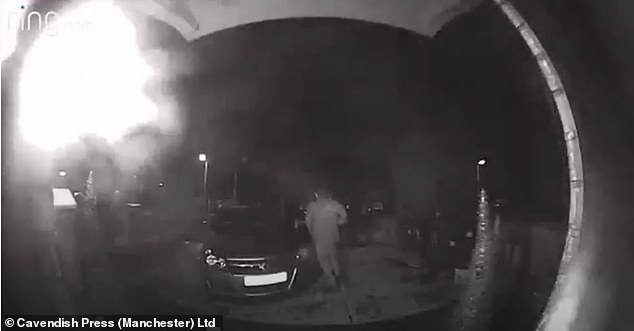 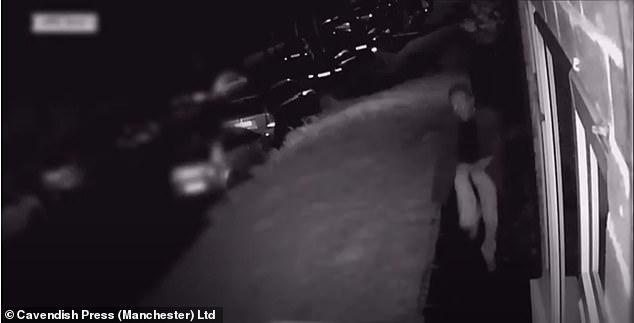 ‘He came into the room where a nine-year-old and an eight-year-old were sleeping. He took the nine-year-old’s onesie, leggings and clothes off and told her ‘shhhh’ and to ‘behave.’ She managed to get her onesie on again.

‘He was smoking an e-cigarette and then assaulted her whilst she put her head in one of her teddies. ‘

Bursk only left the room after being disturbed by the girl’s sister who awoke in a bed next to her and then went to her mother’s room shouting: ‘Mummy, there’s a man in the house.’

He arrived home at 5am to be greeted by his unsuspecting wife who expressed concern about his sleeping habits.

Bursk was arrested four days later after neighbours recognised his face in the CCTV images. His DNA was taken and matched to samples found on the elderly lady and the eight year old girl.

In a statement the first victim said: ‘I tried to put this incident at the back of my mind and get on with life. After reading the press article about him I became more upset.’ Her father added: ‘The person who attacked my family targeted my daughter and I blame myself for what happened. I was a father and should have protected my daughter.’

The 78-year-old victim’s daughter said: ‘My mother’s physical and mental health has got worse. She was vulnerable and was sexually assaulted where she should have been safe.’ One family targeted by Bursk said: ‘The girls said they would never go back to our old house.

‘The children are anxious, have lost contact with friends and are stressed at home. We lost our savings when we had to move. None of our children have been in at school since and their mother has taken time off work to support them. Our nine-year-old always checks the doors and windows now.’

Bursk initially denied wrongdoing but later confessed: ‘Part of me is dead, I am ashamed, and I am sorry. Not a day goes by when I do not think about the poor people I have abused and assaulted. I want them to know I am truly sorry. I hope they can overcome this and lead normal lives.’

Judge John Potter told him: ‘You are a deviant sexual predator who presents a danger to the people who live in the community close to you. You preyed on your victims in the sanctity of their own homes and they had a right to feel safe and secure from the harm inflicted by you.

‘All your victims expressed their fear and anxiety about being in their homes having been attacked by you. They all describe their lives having been changed, their confidence knocked and they are in fear. Some require medical help to cope with the effect of what happened to them.

‘Your victims suffered shock and harm, left their homes and were targeted by you. You ere always looking for another home in which you could commit atrocities towards your victims.

‘You have expressed some remorse but continue to minimise your offending. You said this happened over two nights only which is completely untrue. You also blamed alcohol abuse for your actions.

‘I accept you have suffered harm and trauma in your life and have mental health problems. There is no excuse for your offending just as there was no excuse for the abuse you suffered. This was wicked, predatory and depraved behaviour. A report on you says you present an extreme risk of harm to any woman by sexual offending.’

Bursk was also ordered to sign the Sex Offender Register for life and was made subject of an indefinite Sexual harm Prevention Order. He will be on licence until 2040 following his release from jail under the terms of an extended sentence.

After the hearing Det Supt Howard Millington, said: ‘Bursk is an extremely dangerous sexual predator who would seek opportunities to commit shocking sexual acts on innocent members of the public who were vulnerable due to their age. I am now satisfied that Radcliffe is a much safer place without this individual roaming our streets.

‘The victims of these horrific sexual ordeals have shown great levels of dignity, co-operation and patience during this whole process to finally get the justice that they deserve. They have been through harrowing circumstances but have shown admirable strength and courage to ensure that this man has received the justice he deserves.’

‘Things have now improved organisationally both with the CPS and the police.. If that case was to happen now it would go to the CPS and would get the full consideration of a reviewing lawyer.

chances, missed, police, three, to
You may also like: