No internal police review has ever been undertaken into the management of Hassan Khalif Shire Ali’s national security risk file in the two years since his suspected terror attack on Bourke Street, one of the state's most senior officers has revealed.

Shire Ali, a 30-year-old father from Meadow Heights, had been classified as a national security risk for more than three years when he drove through Melbourne, set his car alight and killed Pellegrini's Espresso Bar co-owner Sisto Malaspina with a knife in November 2018. 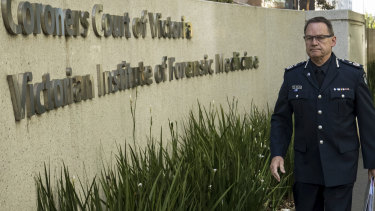 Deputy Commissioner Ross Guenther arriving to give evidence at an inquest in the 2018 Bourke Street attack.Credit:Darrian Traynor

On Friday, Victoria Police Deputy Commissioner Ross Guenther told an inquest into the incident that he didn’t believe Shire Ali would ever have been accepted into the force's deradicalisation programs with no evidence before investigators that he was on a "trajectory" towards radicalisation.

However, he conceded officers from the counter terrorism division's Security Intelligence Unit (SIU) could have done more to manage Shire Ali's file, with gaps in intelligence later contributing to him being rejected from admission into deradicalisation programs, as the inquest had earlier heard.

"I accept there were various oversights along the way … I don't accept there was a lack of rigour in SIU processes," said Mr Guenther, who was in charge of the state's counter terrorism command at the time of the attack.

The deputy commissioner told the inquest that in the years following Shire Ali's interactions with police – including his attempt to leave the country in 2015 while carrying ISIS material –Australia’s terrorist landscape was shifting. 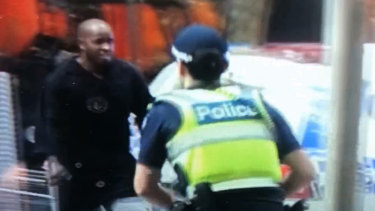 Hassan Khalif Shire Ali lunged at police with a knife before he was shot.

He said with the rise of the caliphate came a significant rise in the dissemination of ISIS propaganda and it was not unusual to find people carrying it.

Mr Guenther said that in the following five years Victoria Police became a world leader with its creation of deradicalisation programs, which aimed to help protect Victorians from the growing threat posed by politically motivated violence.

At the time of Shire Ali's attack, Victoria's SIU was handling a significant case load, including about 17 terror investigations that later thwarted a string of "very, very severe" planned attacks, he said.

But on Friday, the deputy commissioner came under repeated fire over what counsel assisting the coroner Catherine Fitzgerald suggested were apparent deficiencies in the SIU’s management of Shire Ali's file. 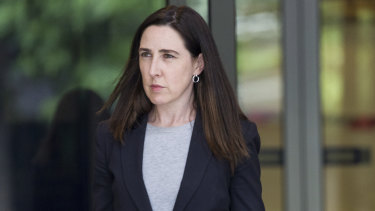 Catherine Fitzgerald, counsel assisting the coroner, at the inquest into the killing of Sisto Malaspina.Credit:Paul Jeffers

This included a year-long delay in having Shire Ali eventually assessed for deradicalisation programs and intelligence gaps that may have led to "missed opportunities" in tracking the wanted man down in the months before his eventual attack.

By the time SIU officers eventually tracked down his address on November 10, 2018, a plan was under way with the help of general duties police to arrest Shire Ali.

He undertook his murderous CBD attack a day earlier and died in hospital after being shot by police.

Mr Guenther defended his members, but acknowledged some matters could,ve been dealt with sooner. 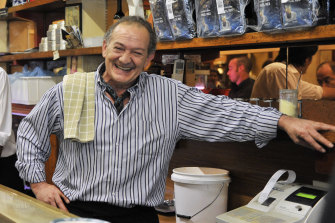 The senior officer also conceded the Joint Counter Terrorism Teams had failed to hand over intelligence on Shire Ali to the SIU, which was in charge of his file.

The inquest heard this included knowledge that Shire Ali had been communicating with a "significant radicalised preacher" operating in Melbourne's north.

As a result, SIU officers rated Shire Ali as a low risk to the community.

"Should [that information] have been available? Yes," Mr Guenther said. "It's an oversight." 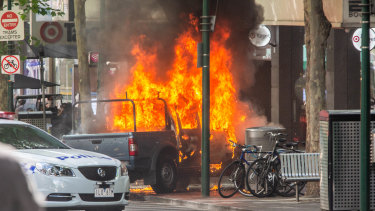 Mr Guenther said no review had even taken place into Victoria Police’s handling of Shire Ali’s person of interest security file, despite the inquest raising serious questions about potential mismanagement and lost opportunities to apprehend the 30-year-old.

Between September and November, Shire Ali was wanted for a string of alleged assaults with weapons and a hit-and-run.

"I'm not aware of any review being initiated in relation to that file," Mr Guenther said.

"Had he been ever arrested … he likely would have been bailed, probably with an increased level of agitation."

Ha, Never, police, reviewed, their
You may also like: