Police 'retreat' from lockdown breaches to focus on large gatherings

Police are starting to retreat from enforcing certain lockdown measures and sticking to breaking up large gatherings, senior policing chiefs have said.

Earlier this month it was revealed police officers have little power to enforce social distancing rules such as wearing a face mask, or keeping a two metre gap between people.

Less than a week after the Prime Minister’s top aide had travelled to Durham, police now say the public have responded to approaches with: ‘If it’s okay for Cummings, it’s okay for us,’ The Times has claimed. 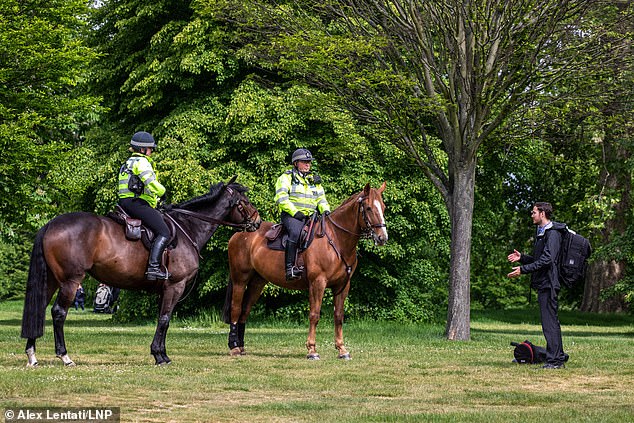 Police are now opting to ‘engage, explain and encourage’ lockdown measures as it has become harder to enforce rules, which in some cases they have no powers to do

The National Police Chiefs’ Council and Association and Association of Police and Crime Commissioners have told ministers lockdown issues have become a matter of ‘personal and moral responsibility,’ rather than an enforceable policing issue.

The NPCC has previously said it treats enforcement as a ‘last resort,’ opting to instead ‘engage, explain and encourage’ the public to comply with government guidelines.

Conservative Police and Crime Commissioner for Bedfordshire Kathryn Holloway wrote to other PCCs on Tuesday and said the government accepted police had ‘retreated’ over lockdown rules and were no longer enforcing them.

Officers are still focused on breaking up large social gatherings which clearly show groups breaking the rules, she added.

It follows on from the NPCC’s guidance issued earlier this month, which read: ‘Gatherings of three or more people (from different households) are not permitted.’

What’s the difference between Coronavirus Act and Health Regulations?

The main criminal offence under the Coronavirus Act relates to potentially infectious people who refuse to co-operate with the police or public health officers, when they are required to be screened for COVID-19.

But Health Regulations apply to anyone not obeying lockdown rules.

The legal test under the Regulations is whether someone has a reasonable excuse for being outside their home, which includes going to work, exercising or caring for the vulnerable.

Police two enforceable powers to issue fines or detain people since lockdown began, under either the Coronavirus Act or Health Protection Regulations.

Fines have exclusively been handed out so far under the Health Protection Regulations, which can be enforced if someone does not have a reasonable excuse to be outside their home.

Since lockdown measures were eased by Boris Johnson earlier this month, making it possible for people to travel anywhere in England to sunbathe or meet one person from another household in a public space, it has become harder for police to enforce this law.

While police have been unable to enforce some social distancing guidelines for weeks, there is a feeling among officers that the Dominic Cummings saga has lessened the public’s motivation to stick to lockdown rules.

Mr Cummings has refused to apologise for driving 260 miles from his home in London to Durham at the end of March with his wife and son, amid fears they were coming down with coronavirus.

Nor did he apologise for making a 60-mile round trip to Barnard Castle, which he told journalists was a test drive to see if his eyes were up to driving.