Political row over Supreme Court a key moment for the US

The US Supreme Court is a very different institution to our own High Court, having been the stage for many of America's most contentious and hard-fought battles over racial and gender equality, abortion, gun laws, campaign funding and LGBTQI rights.

That is why the political battle over who will pick the nominee to fill the Supreme Court seat left vacant by the death of Ruth Bader Ginsburg is such a momentous moment for America.

Before her passing, the composition of the court was finely balanced. It had four clear voices on the political left, including Justice Ginsburg, four on the right, and Chief Justice John Roberts, who despite his conservative leanings provided a deciding vote in recent years in support of abortion, gay rights, immigration and healthcare moves. 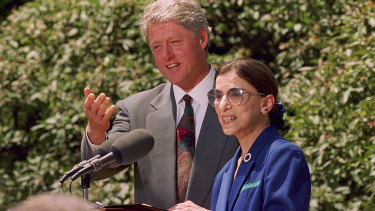 Ruth Bader Ginsburg being nominated to the US Supreme Court in 1993 by then US president Bill Clinton.Credit:AP

If President Donald Trump were to appoint Justice Ginsburg's replacement, in what would be his third Supreme Cout appointment since taking office, this would tip the court decisively to the right. With the backing of the Republican-controlled Senate, which has the final say on Supreme Court appointments, he is within reach of enshrining change that would endure long past his days as President.

The possible overturning of Roe v Wade, the landmark case in which the Supreme Court ruled in 1973 that the US constitution protected a pregnant woman's ability to have an abortion, illustrates only the most obvious of a broad range of progressive causes that could suffer setbacks.

But Mr Trump's determination to secure his candidate is generating fierce debate. In a highly contentious ruling in the final year of Barack Obama's presidency, the Republican-led Senate refused to appoint a replacement for Antonin Scalia, a conservative Supreme Court judge. Republican leaders in the Senate argued at the time that if a vacant position opened in the final year of a presidency it should be left for the newly elected president to decide.

In an astonishing about-face, the same Republican leaders are now supporting Mr Trump making the call to replace Justice Ginsburg, despite the election being just weeks away. Unsurprisingly, Democrats are furious, but the stance is also causing consternation among some Republican senators, with two already publicly stating that the vacancy should be filled by whoever wins the election.

In the next few days, Mr Trump is expected to nominate his candidate, who is expected to be a woman. Choosing a woman from the right would hardly appease those on the left. Amy Coney Barrett, front-runner for the position, is a devout Catholic who has criticised Roe vs Wade.

Justice Ginsburg was a truly remarkable woman. She was not only a powerful intellectual force for progressive views during her 27 years on the Supreme Court, but was a prominent women's rights pioneer in the 1970s. During that time, she argued six women's rights cases before the Supreme Court and won five of them, profoundly changing the law.

It has been reported that just days before her death, Justice Ginsburg dictated a statement to her granddaughter: "My most fervent wish is that I will not be replaced until a new president is installed." For a woman who gave so much of herself to the causes that she so passionately championed, it would not seem an unreasonable request. But with a president behind in the polls and tantalisingly close to changing the Supreme Court in a major way, that is not a request ever likely to have been granted.

Cou, over, political, row, Supreme
You may also like: