Former UKIP leader Nigel Farage told a pro-Brexit rally in London on Friday night that he expects there to be a second referendum within months because the government will ‘betray us completely’.

Both he and Conservative MP Jacob Rees-Mogg gave impassioned speeches at the Leave Means Leave rally in central London, with the former UKIP leader urging Brexit campaigners to ‘get ready for every situation’.

Rees-Mogg, meanwhile, said that Brexit was about taking back control because ‘we can do things better ourselves’.

He also said that Britain should be competing with the world and ‘not with the small, narrow, outdated European system’ 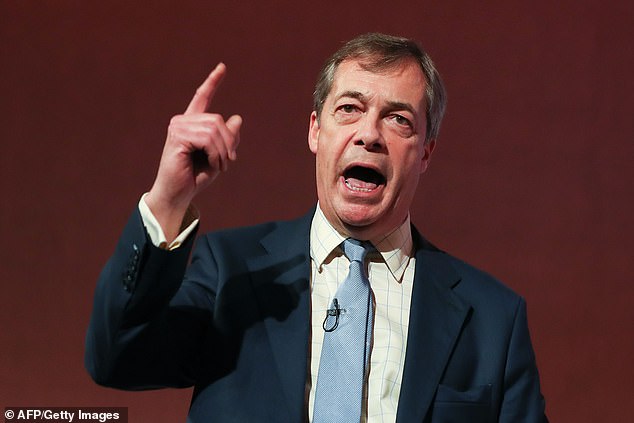 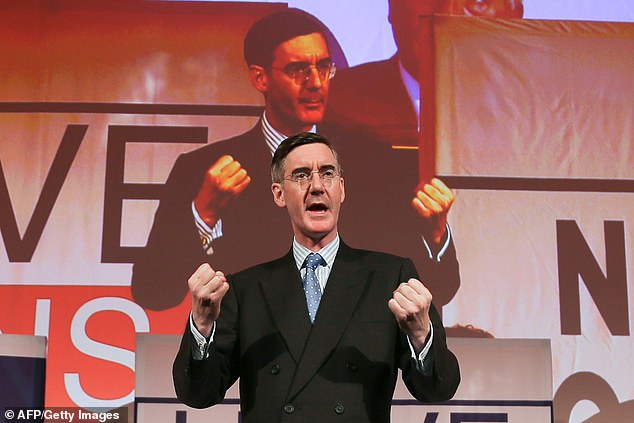 The leading Brexiteers appeared glum as they sat waiting for their turn to speak, before later breaking into smiles and giggles.

‘Let us fight back.

‘My message folks tonight is as much as I don’t want a second referendum it would be wrong of us on a Leave Means Leave platform not to get ready, not to be prepared for a worst case scenario.

‘If I’m wrong, we’ve lost nothing. We’ve not got to move into a different gear. We’ve got to start forming branches and active groups all over this country.

‘We’ve got to re-engage with those millions of people who never voted in their lives before. We’ve got to connect with them.

‘And if all our efforts come to nothing because we leave at 11pm on March 29, then so much the better. 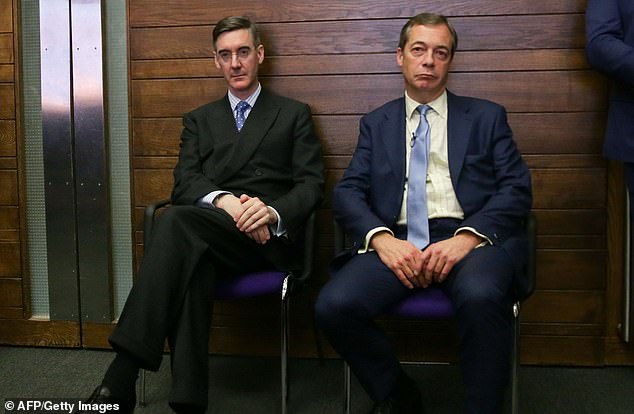 Jacob Rees-Mogg and Nigel Farage both spoke at the Leave Means Leave rally, held in central London on Friday night – seeming a little awkward in each other’s presence

‘But can I urge you, can I implore you to get ready for every situation.

‘I think they will in the next few months betray us completely and let us be ready not just to fight back, but if it comes we will win it next time by a much bigger margin.’ 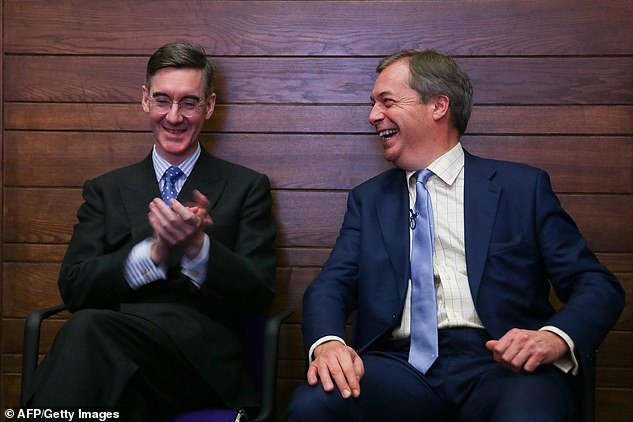 As well as Rees-Mogg and Farage, several other Brexiteers spoke, including Tim Martin, the found of pub chain JD Wetherspoon

In his speech, Rees-Mogg outlined how he believes that Britain will prosper after Brexit.

He said: ‘The EU takes away democracy. We want to leave because we can do things better ourselves.

‘It’s in our nation’s hands to succeed.

‘We are taking this wonderful, exciting, generational opportunity. It will make us stronger, more prosperous and more successful in generations to come.

‘Taking back control is about doing things better, succeeding and prospering.’

There was a sizable crowd in attendance at the rally, with many of them holding up signs with pro-Brexit slogans. 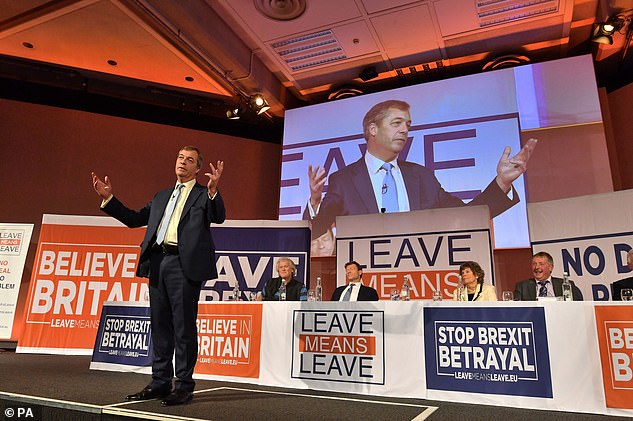 Speaking to those who voted to leave, Farage said: ‘Can I implore you to get ready for every situation’ 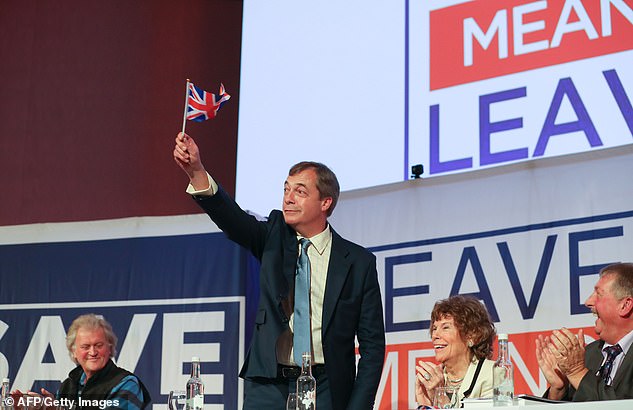 At one point during the rally, the former UKIP leader stood up to wave a Union Jack – to the delight of the audience 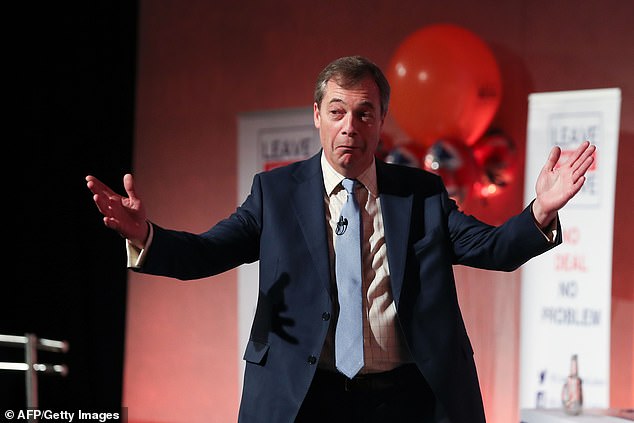 Speaking at the ‘Save Brexit’ rally, Farage also said: ‘We’ve got to re-engage with those millions of people who never voted in their lives before’

He said his business has swapped some of its EU imports for UK products in order to ‘show a bit of muscle’ against ‘scare stories’.

Speaking at the Leave Means Leave ‘Save Brexit Rally’ in London on Friday night, Mr Martin said: ‘The other scare story is that Kent will become a lorry park – now I don’t believe that and neither do you. We at Wetherspoons decided to do a little experiment. 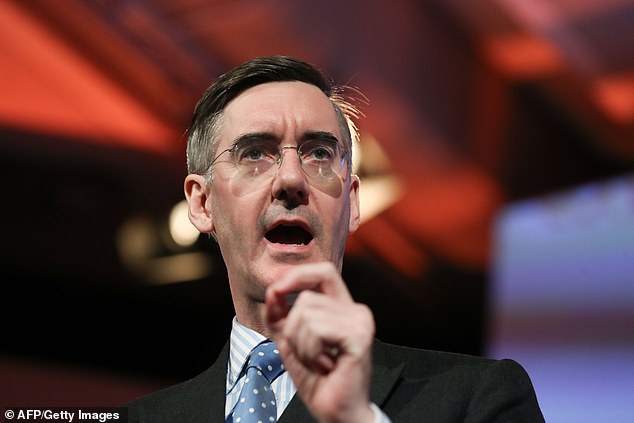 ‘I’m a free trader … but there comes a time which I think has arrived now and we have to show a bit of muscle.’

Mr Martin said since taking this decision his trade had ‘gone up’.

He added: ‘The EU is only 7 percent of the world, there’s a lot of arguments in favour of doing the deal because we need frictionless trade.

‘If you believe in frictionless trade for 7 percent of the world, what about the other 93 percent?’ 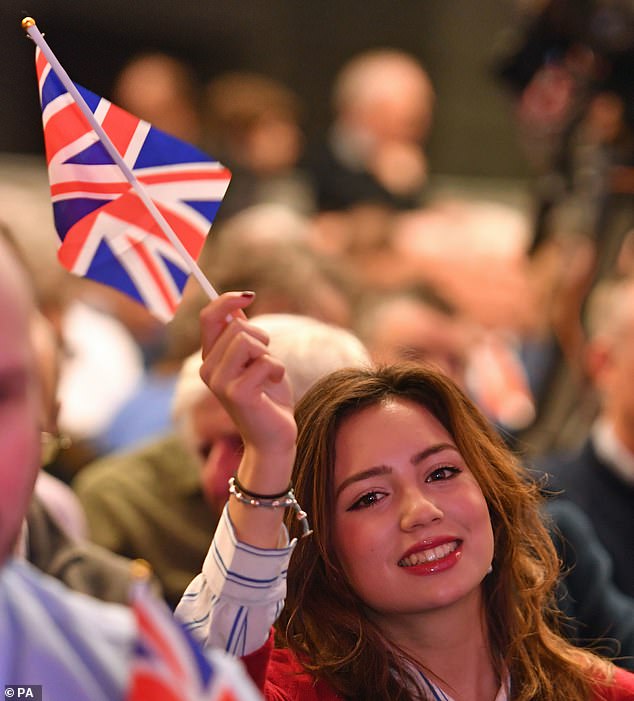 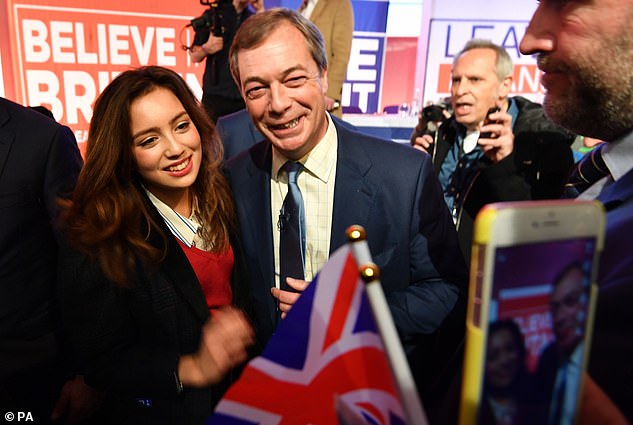 Many were eager to meet the leaders, including this young woman who posed with Farage after his speech 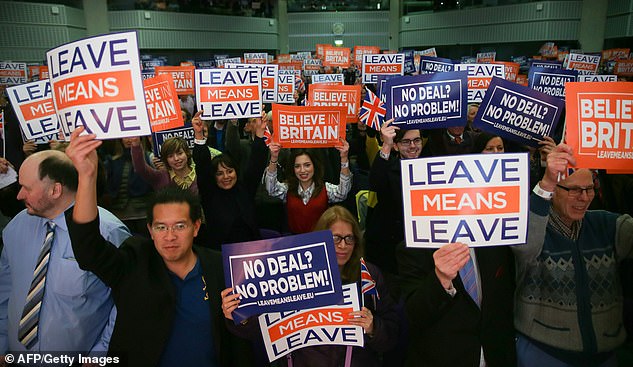 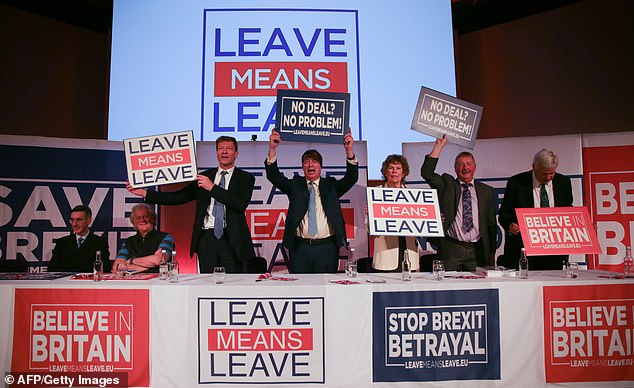 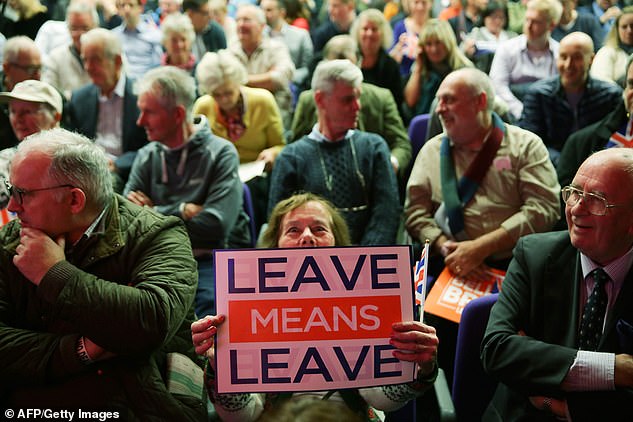