Defunding the police is not a solution for safer cities, Portland Police Association President Daryl Turner explained on “The Story" on Wednesday night.

Since the city of Portland disbanded its gun violence reduction team July 1, shootings have increased and homicide hit a 30-year high. According to Turner, Portland Mayor and police commissioner Ted Wheeler has realized defunding the police force "was a mistake.” 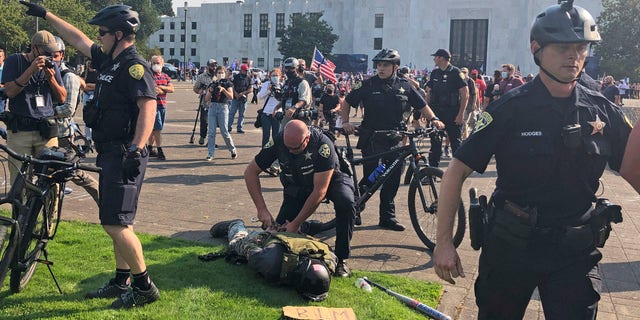 A protester is arrested during a protest at the Oregon State Capitol for a pro-Donald Trump rally at the Capitol in Salem, Ore. on Monday Sept. 7, 2020. (Associated Press)

Turner said people of color are most affected by this onset of violence. During a shooting in one neighborhood, he said, 150 rounds of ammunition were fired.

“One hundred and fifty rounds indiscriminately in neighborhoods, in the houses, in the places where people live, where people play, where people want to raise their children and families,” he said. “That is unacceptable.”

Politicians like Democratic vice presidential nominee Sen. Kamala Harris of California continue to push the defunding of police forces, which Turner said further proves the movement is a stunt.

“Politicians bent on power who perpetuate misinformation and untruths are just as guilty as using their privilege to hijack this movement, the movement of racial equity, the movement of social justice as the rioters who are committing violent acts, burning and looting and causing chaos in the streets,” he said.