The rioting was underway in the downtown area, with the state’s largest city now seeing more than four months of daily and nightly protests, vandalism and violence.

At one point in the evening, rioters were seen setting an American flag on fire.

At another point, a detainee escaped from a police van and ran off, according to a KOIN-TV reporter’s video on Twitter. 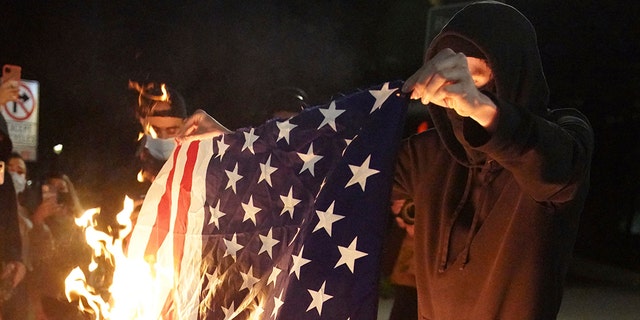 “At least one criminal citation was issued,” the tweet said.

Saturday’s unrest began hours earlier, around noon, with a planned event by the conservative Proud Boys, but an expected crowd of thousands for that rally failed to materialize, with only several hundred showing up, FOX 12 of Oregon reported. 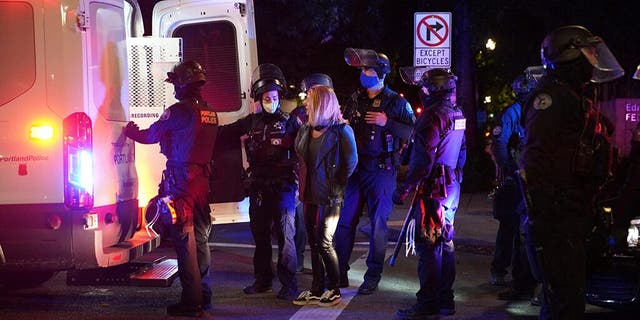 A female protester is loaded into a van after being arrested while rallying at the Mark O. Hatfield United States Courthouse on Saturday, Sept. 26, 2020, in Portland, Ore. (Associated Press)<br>

A day earlier, Oregon Gov. Kate Brown had warned anyone attending the Proud Boys event – whether supporters of the groups or the left-wing counter-protesters who often appear at their events – that they would be “held accountable” if caught “stoking the flames of violence.”

About 50 Portland police officers had been deputized as federal officers in anticipation of trouble at the Proud Boys event, OregonLive.com reported.

About 50 Oregon State Police members were federally deputized in July, the report said.

The designations, in part, would help federal authorities bring federal charges – with potential harsher prison terms — against any suspects accused of assaulting the officers, according to the report.