Tim Pallas’ sixth budget is a bit like Melbourne’s tough stage four lockdown; it's drastic and unprecedented action in response to a desperate situation.

And just like Melbourne’s long lockdown, it’s going to take time before we know if Pallas’ prescription for economic recovery is working. 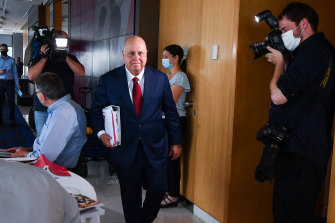 It's a question that most of us will be sweating on and will probably be the defining issue in state politics right up until the next election in two years.

So if you haven’t heard enough about debt and deficit yet, don’t worry, there will be plenty more to come.

Put simply; if Labor’s $49 billion spending extravaganza fixes the economy, then the electorate can live with a busted budget, probably for many years to come.

After all, as Pallas keeps pointing out, the federal Liberal government is running larger deficits than Victoria, relatively speaking, and taking the nation into half-a-trillion dollars worth of debt without any political risk.

But if Victorians can’t feel a real recovery in their fortunes in 2021, then watch out. People will be ready to listen to Opposition Leader Michael O’Brien, if he's still around, as he steps up his attacks on debt, deficit and waste.

Listening to Pallas’ talk of jobs and recovery on Tuesday, it was hard not to want to believe. But the budget papers are dotted with troubling signs.

Unemployment, even if Labor achieves its ambitious targets of hundreds of thousands of new jobs, will still be up at 5.75 per cent in 2024, according to Treasury, a full 1 per cent above pre-pandemic levels.

Wages are not expected to do much either in the coming years, with the combined effect set to send total household income in the state backwards by about 1 per cent in the next four years.

That's not a great sign for household consumption, which needs to do some serious heavy lifting with international tourism gone and overseas students not set to return, if they ever do, before 2022.

Those warning signs from Treasury that we are in for a long haul out of this trough contrast with predictions in the budget papers that seem optimistic, with the economy tipped to return to around its pre-COVID level by the back end of next year. Here’s hoping.

The state’s revenue base, smashed by the pandemic to the tune of almost $8 billion this year, is expected to come roaring back by $3.5 billion next year and nearly $6.5 billion the year after that.

Well, fingers crossed, but there’s a lot that can go wrong with these predictions, above all the prospect, hanging like a dark shadow over this budget, that the local health situation goes bad again or the global picture gets even worse in 2021.

There are good reasons to hope not, just as it is possible to be optimistic that Pallas and Andrews have built their spending juggernaut with enough grunt to pull Victoria out of the slump.

We just won’t know for a while.