Potholes are costing drivers and insurers at least £1million a month

Potholes are costing drivers and insurers at least £1million a month in total due to massive car repair bills, according to a report.

The AA said the number of pothole-related claims it had seen during the first four months of 2018 alone was more than for the whole of 2017.

The broker estimated that nationally, there will have been over 4,200 claims for pothole damage so far this year compared with just over 3,500 estimated claims across last year.

It described the number of potholes as an ‘epidemic’ and a ‘national embarrassment’. 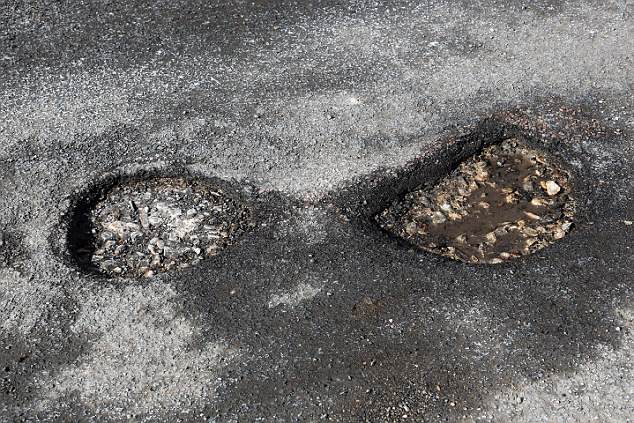 Potholes are costing drivers and insurers at least £1million a month in total due to massive car repair bills, according to estimates from the AA

With an estimated average repair bill of around £1,000, the total this year so far comes to ‘an eye-watering’ £4.2 million, it said, or more than £1million per month, where drivers consider they have no option but to make an insurance claim.

Janet Connor, the AA’s director of insurance said: ‘In most cases the damage caused by a pothole – a ruined tyre or even two tyres and perhaps a wheel rim – doesn’t justify making an insurance claim given that it is likely to lead to the loss of your excess and no-claim bonus. So the claims we are seeing are clearly much worse than that.

‘Drivers are hitting potholes and ruining their suspension, steering, the underbody of the car, breaking axles and occasionally being knocked off course and hitting other vehicles, kerbs or a lamp-post.

‘This year we are seeing a growing number of pothole claims described as: ‘car severely damaged and un-driveable’ which didn’t happen at all last year.

‘The pothole epidemic has become nothing short of a national disgrace.’

Ms Connor said: ‘Local council budgets have been squeezed to the extent that competing priorities mean they don’t have the resources to keep their roads up to scratch …

‘Our nation’s highways have become a national embarrassment.’

The AA has launched a campaign under the hashtag FlagitFunditFillit to highlight what it says is a need ‘to invest in reversing the shocking deterioration of Britain’s roads’.

Drivers’ pothole woes have included a crater so deep it grounded a car leaving it stuck and a pothole lurking under a puddle which broke another car’s steering, the AA said.

It says potholes should be flagged up to the highway authority responsible so they are aware it exists.

Ms Connor said: ‘I would call on drivers to safely photograph the potholes they encounter and send them to the responsible highway authority and the Department for Transport by social media, to show them the extent of the pothole problem.

‘We are also calling on the Government to ‘fund it’ by ring-fencing 2p per litre of current fuel duty to create a £1billion pothole fund specifically to be channelled to local councils so they can get on top of their pothole problem.

‘With that funding, councils can then ‘fill it’ and make their local roads safe for all road users whether on four wheels, two, or on foot.

‘That way, compensation payments that could otherwise be used to keep roads in good repair, should dramatically fall.’

Councillor Martin Tett, the Local Government Association’s transport spokesman, said: ‘Councils are fixing a pothole every 21 seconds and keeping roads safe is one of the most important jobs we do. 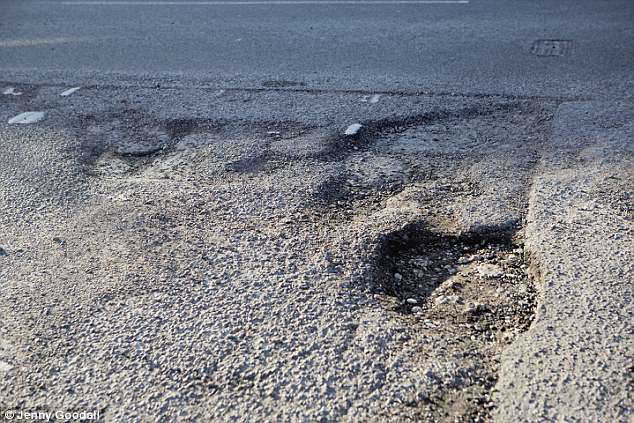 ‘However, only long-term, consistent and fairer government investment in local road maintenance can allow councils to embark on the widespread improvement of our roads that is desperately needed.’

He continued: ‘In the short term, councils are likely to need more support from the Government as the full extent of the repairs needed after the recent winter weather has been made known and we hope that the Government will stand ready to provide this.’

A Highways England spokeswoman said: ‘We know that drivers want and deserve good quality, safe roads and since 2015 when Highways England was created, we have replaced more than 4,400 miles of road surface.

‘Safety is at the centre of everything we do, which is why we set stringent standards for pothole repairs and also regularly inspect our roads to help reduce the potential for potholes.’

A Department for Transport spokesman said the government was ‘investing a record £23billion on our roads to improve journeys’.

‘We have listened to the concerns of road users and are already providing councils in England with over £6billion to help improve the condition of our local highways.

‘This funding includes a record £296million through the Pothole Action Fund – enough to fix around six million potholes.

‘While it is for councils to identify where repairs should be undertaken, the Department is looking at how innovative technology can help councils keep their roads in the best condition and save money.’