Manila: A powerful earthquake has shaken the southern Philippines.

No damage reports were immediately available.

The US Geological Survey says the 6.8 magnitude earthquake struck on Tuesday morning on Mindanao island in the south. Philippine seismologists said it was a lower magnitude of 6.4. 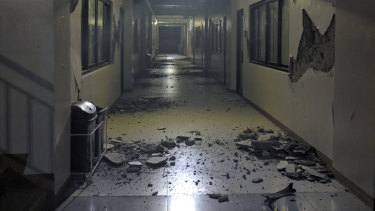 Debris is scattered on the floor of a damaged building in Digos, Davao del Sur province, southern Philippines, after an earthquake on October 16.Credit:AP

It was near the town of Kisante and less than 100 kilometres from Davao City. It was about 50km deep.

Mindanao has been shaken by other earthquakes recently. Seismic activity is common in the Philippines, which lies on the Pacific "Ring of Fire", the ring of faults around the Pacific Ocean where most of the world's earthquakes occur.