Christian street preacher, 65, who was once awarded £2,500 for ‘wrongful arrest’ when his Bible was confiscated loses appeal against conviction for ranting ‘all Muslims are going to hell’

A Christian street preacher, once awarded £2,500 for ‘wrongful arrest’ and the confiscation of his Bible, has lost his appeal against conviction for ranting: ‘All Muslims are going to hell.’

Oluwole Ilesanmi, 65, was given the Met Police handout in July last year after officers handcuffed him over accusations of Islamophobia while he ‘preached’ near Southgate Tube station in north London.

In a video which has been viewed over three million times, the pastor told police not to ‘take my Bible away’ after describing Islam as an ‘aberration’ in February 2019.

But the devout Christian was arrested again after heading to Bishopsgate, central London and repeatedly shouting: ‘All Muslims will go to hell’ last 7 September.

Ilesanmi then pointed at a shop worker, referred to only as Mr Mohammod, and launched a vile tirade of abuse as he ‘invaded his space.’

The former dentist told the victim: ‘You will go to hell’ before raising his voice and repeating the statement when Mr Mohammod asked him to stop. 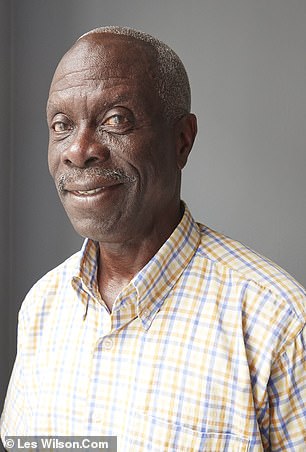 Oluwole Ilesanmi, 64, has welcomed the payout by the Metropolitan Police as a victory for freedom of speech after he had been wrongly accused of Islamophobia

The pastor was convicted of religiously aggravated assault at Hendon Magistrates’ Court earlier this year and fined £500 but launched an appeal against his conviction and sentence at the Old Bailey.

He was not present for the two-day hearing but was represented by barrister Michael Phillips.

Mr Phillips told the court that he had been exercising his right to free speech and that those who had taken offence could ‘walk on by.’

The lawyer said: ‘There’s an element of, if someone’s on the street you can walk past.

‘You don’t have to listen to the preacher, you can walk on by.

‘Here we have two people who were offended. Hundreds of people went past. That is a factor to be considered.’

But prosecutor John Crawford argued that the line between ‘legitimate freedom of expression’ and a ‘threat to public order’ had been crossed. 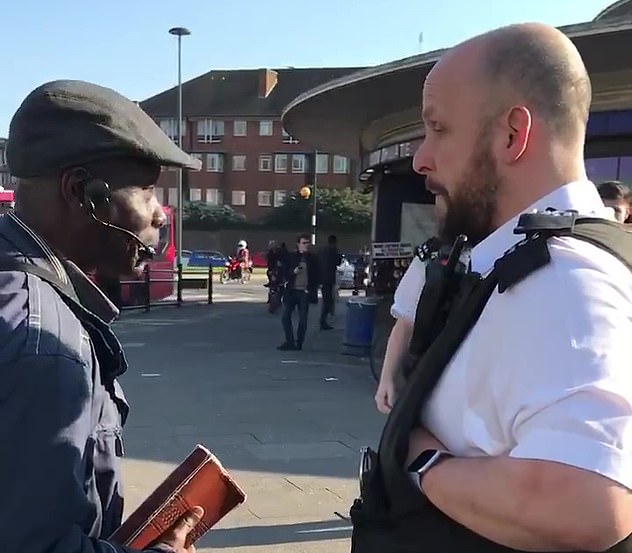 Ilesanmi admits to having described Islam as an ‘aberration’ but insists he was simply expressing his point of view as a Christian rather than denigrating Muslims. He is pictured with a police officer at the time of the incident

He was sentenced to a two-year conditional discharge with a requirement to pay £300 in compensation and £620 in costs.

The judge said: ‘When he turned from preaching his views to anyone who happened to pass and directed his comments to Mr Mohammod in particular and said in an increasingly angry tone “All Muslims are going to hell” and having pointed at Mr Mohammod went on saying “you are going to hell” before repeating it in front of a police officer, his behaviour lost the protection to freedom of speech under Articles 9 and 10.

‘We judge that he went beyond what he was entitled to express directly to Mr Mohammod. 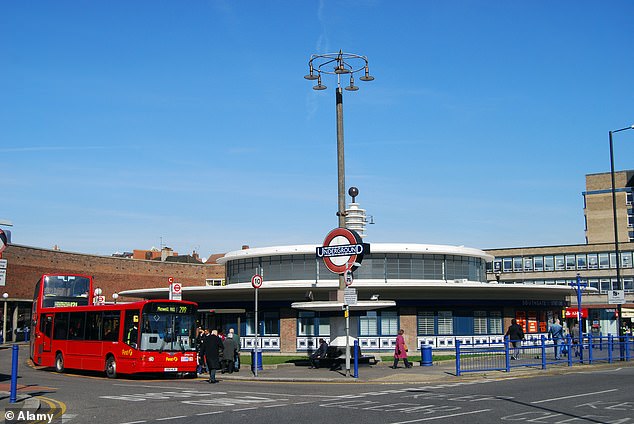 The former dentist was preaching outside Southgate Tube station (pictured above in a stock photo) in North London in February when he was approached by two officers. A passer-by had earlier called police and accused Mr Ilesanmi of hate speech

‘The appellant must have realised he was speaking directly to someone of the Muslim faith and who had already said to the appellant he cannot say that..

‘It follows that the use of words which we judge clearly demonstrated hostility towards Mr Mohammod based on his membership to that religion.

‘It was only the appellant’s good fortune that Mr Mohammod managed to control the anger and upset that he felt at the remarks and turned to the police for support.’

Ilesanmi, of Speyside, Southgate, denied but was convicted of religiously aggravated harassment.

He was sentenced to a two-year conditional discharge and ordered to pay £300 in compensation and £620 in costs.

Appeal, court, fo, loses, preacher
You may also like: