An organisation linked to Britain’s only state-approved press regulator has given money to a website accused of publishing conspiracy theories about terror attacks.

The Public Interest News Foundation (PINF) handed a grant earlier this year to 5Pillars, a website that ran an article suggesting that MI5 may have arranged the murder of British soldier Lee Rigby in 2013.

5Pillars also published pieces that questioned whether James Foley, an American journalist beheaded by Islamic State in 2014, was murdered by Western spies and that the 9/11 attacks were ‘Israel’s macabre, crowning glory’.

PINF is led by Jonathan Heawood, the founder of state-backed press regulator Impress. It was launched last year with Impress support to promote public-interest journalism.

5Pillars, which is regulated by Impress, was awarded a £3,000 grant funded by the Joseph Rowntree Reform Trust last month as part of a ‘Covid-19 emergency fund’ to help independent news providers. 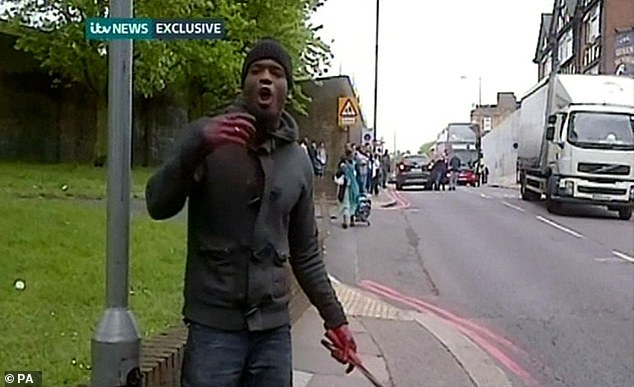 The Public Interest News Foundation handed a grant to 5Pillars, a website that ran an article suggesting that MI5 may have arranged the murder of British soldier Lee Rigby in 2013 (pictured, Michael Adebolajo after the killing of Lee Rigby)

Three days after the money was paid, Quilliam, a counter-extremism organisation, published a dossier of articles that have been published by 5Pillars, which it accused of being ‘a fake news site with a track record of peddling conspiracy theories about terrorist attacks’.

He asked: ‘Did Michael Adebolajo and his friend hack that British soldier to death on the orders of MI5 because they had some leverage over them and they were compelled to do it? Did MI5 set the whole thing up to demonise Muslims and Islam.’

5Pillars was set up in 2013 as ‘a news, opinion and analysis-based website which concentrates on British Muslim news but also looks to the wider Islamic world’.

Mr Salih is a former head of news at Iran’s Press TV in London.

David Toube, Quilliam’s director of policy said: ‘It is unimpressive that the [PINF] panel did not conduct appropriate due diligence in advance of the award… to avoid this embarrassing mistake.’

In a statement, PINF said it was encouraging anyone with concerns about 5Pillars’ journalism to inform Impress ‘as a matter of urgency’.

It has told 5Pillars that it will have to repay the grant if Impress rules against it.

‘We take extremely seriously the concerns that were raised about some of the material on the 5Pillars website and related social media accounts,’ it added. ‘PINF exists to promote active citizenship and community engagement by supporting public interest journalism with high standards. We do not wish to support journalism that does not provide a benefit to the public.’

It has been funded by former motorsport boss Max Mosley’s family charity.

5Pillars did not respond to requests for comment. Its website says that being regulated by Impress ‘means that we have to adhere to a rigorous set of journalistic standards’.