A man described as the "primary agitator" of an anti-lockdown protest at Melbourne's Queen Victoria Market on Sunday has been charged with incitement after police raided his home.

The 44-year-old man from Burwood East was taken into custody on Sunday during the violent protest, where police clashed with protesters among the fruit and vegetable stalls. 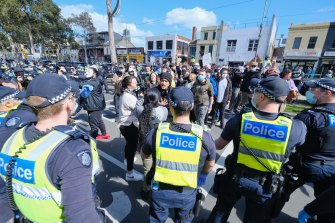 Police clashed with protesters at the Queen Victoria Market on SundayCredit:Luis Enrique Ascui

The man's home was raided by police and a computer and other items were seized. He was charged with inciting another person to commit an offence and has been bailed to appear at Ringwood Magistrates Court on February 2 next year.

In angry and heated exchanges, close to 250 protesters opposing the government's coronavirus restrictions flocked to the market from about 11am on Sunday. Police arrested 74 people.

In the 24 hours to Monday morning, Victoria Police issued more than half a million dollars' worth of fines to individuals breaching restrictions.

A total of 346 fines were issued. More than half of these (176) were handed out at the anti-lockdown protest.

Twenty-five fines were issued to people who failed to wear a face covering, 23 were at vehicle checkpoints and 46 were for curfew breaches.

Two men travelling outside their five-kilometre radius to buy burgers from a shopping centre were among those fined.

The location of Sunday's protest had been kept largely a secret before being posted on social media about an hour before it began.

Tensions spiked about 11.45am as a group of more than 50 protesters were surrounded by police on Peel Street. Police – including members of the public order response unit as well as uniformed police and plain-clothed detectives – greatly outnumbered protesters.

The protesters chanted "peace and love" and "freedom" before they were plucked from the crowd one-by-one and taken away for questioning as objects were thrown at heavily-armed police in riot gear. 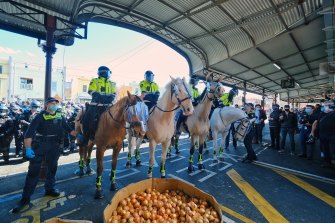 Stunned shoppers watched as police clashed with protesters at the market.Credit:Luis Enrique Ascui

Protesters claimed the arrests were in breach of human rights, as police tried to put masks on those they led away.

Sunday's protest was the second for the weekend. Rallies fizzled out on Saturday amid confusion over locations, gloomy weather and an immense police presence.

While Premier Daniel Andrews would not be drawn on whether police tactics should change after repeated protests, he said on Sunday that police did a "very good job yesterday in a challenging set of circumstances".