Parents have blasted a decision to end boys and girls only races at a primary school sports day.

Merkinch Primary School in Inverness made the decision after the Highland Council emailed out new guidelines to improve inclusion for pupils who are lesbian, gay, bisexual, transgender or intersex (LGBTI).

The move meant all the children recently competed together at a sports day.

Parents fear it could cause the children to be bullied and are calling for the school to backtrack on the decision.

Mother-of-two Melissa Watson said on hearing the news: ‘It was a big talking point for me and my mates. There was a race between five girls and one boy and he came last and all the boys were like ‘Ha ha, you got beaten by a girl’.

‘In my eyes this opens the kids up to being bullied.

‘Why doesn’t the school just let the LGBTI children race with the sex that they feel they belong to, instead of making all the kids run mixed races?’ 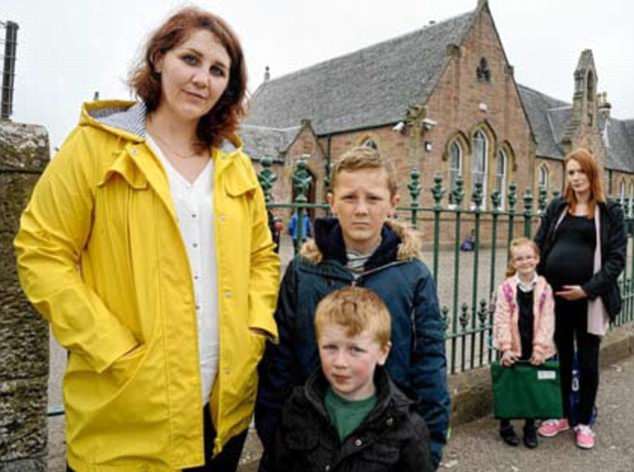 Melissa Watson with children Leo Watson and Clive Carroll outside Merkinch Primary School in Inverness, which has banned single-sex events from its school sports day. Stood behind them is Victoria Renny with daughter Bella Peters

Another mother, who did not wish to be named, said: ‘The world has gone mad. I feel for the children in 10-15 years. I dread to think what it’s going to be like.’

Del McClurg is chairwoman of Merkinch Community Council and her grandchildren attend Merkinch Primary. She said she had ‘mixed feelings’ about the move.

‘I think the school needs to explain this to the parents,’ she said. ‘The Olympics don’t do mixed-gender competition sports.’

Headteacher Jillian Kean has been approached by MailOnline for comment.

In a written response she confirmed races were mixed at the sports day held this week and that feedback from parents and children had been positive.

Hugh Torrance, is director of leadership, equality and active participation (LEAP) in Sports Scotland, which published the guidelines emailed by Highland Council to all schools,

He said: ‘The guidance has come about as a result of LGBTI pupils working together with schools to try and address some particularly difficult issues that pupils have experienced within physical education in particular.

‘We have suggested that pupils should not be segregated according to sex unless it’s necessary.

‘The evidence points to there being no differences between the genders when it comes to sport pre-puberty. But the manifesto is not saying that we need to do away with gender segregation completely in sport. That’s not how the world is set up at the moment.’

Morgan Cowley, former chairman of the Highland LGBTI forum which campaigns for the fair treatment of all LGBTI people, said: ‘I think introducing non-gender specific sports days into schools is rather a clumsy way of trying to address the crux of the matter within our schools, which is promoting respect for one another and celebrating difference.

‘There are undoubtedly more astute ways of doing this and what Merkinch Primary is doing seems to be increasing conflict rather than reducing it.

‘Trying to promote nongender specific sports into schools at this point in our society’s development, when the whole world celebrates and enjoys gender-specific sport at the highest levels, seems a hard sell.’