PRINCE Harry shared a glass of champagne with Prince William but left just 20 minutes later after unveiling a statue honouring their mum. 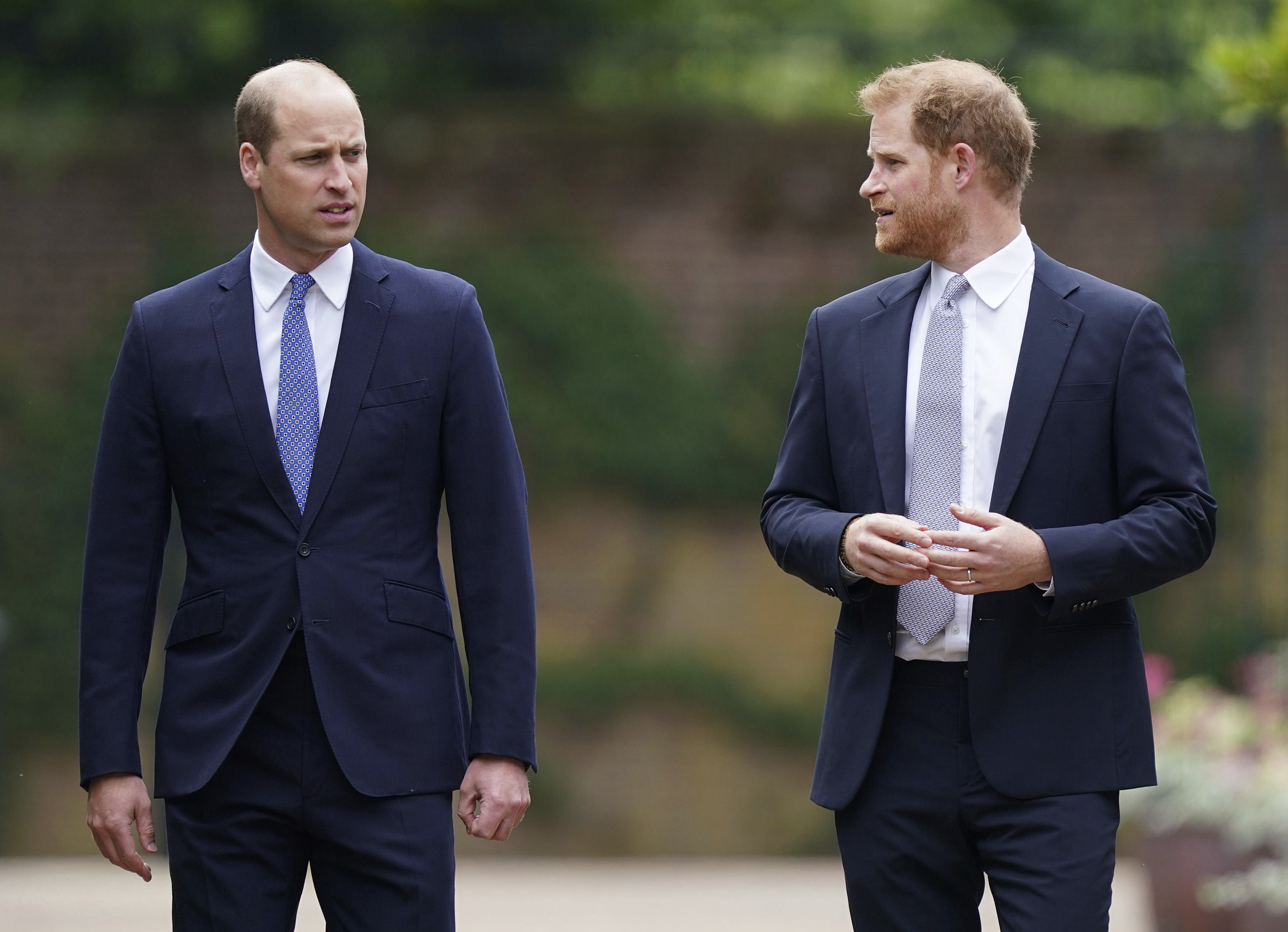 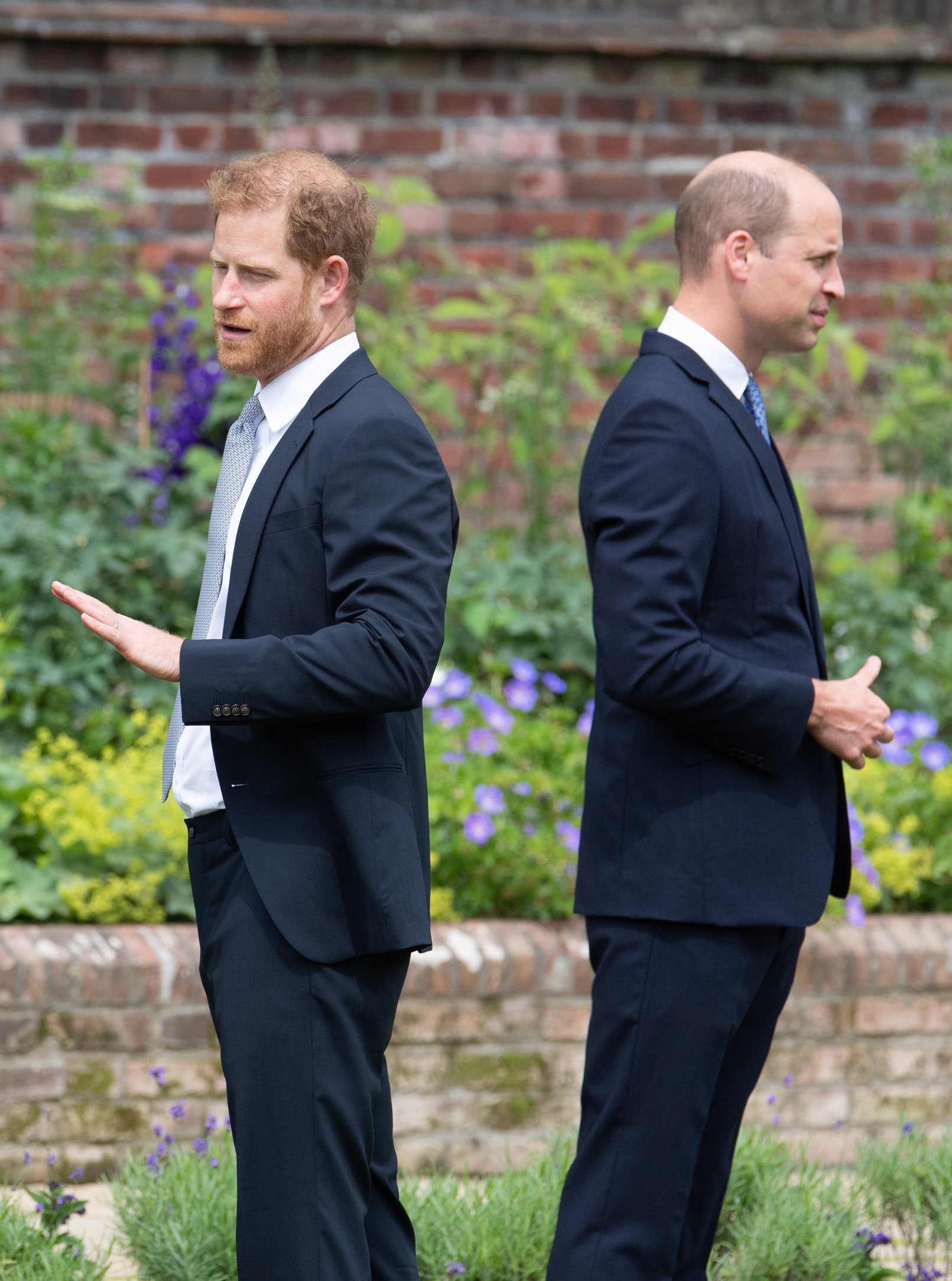 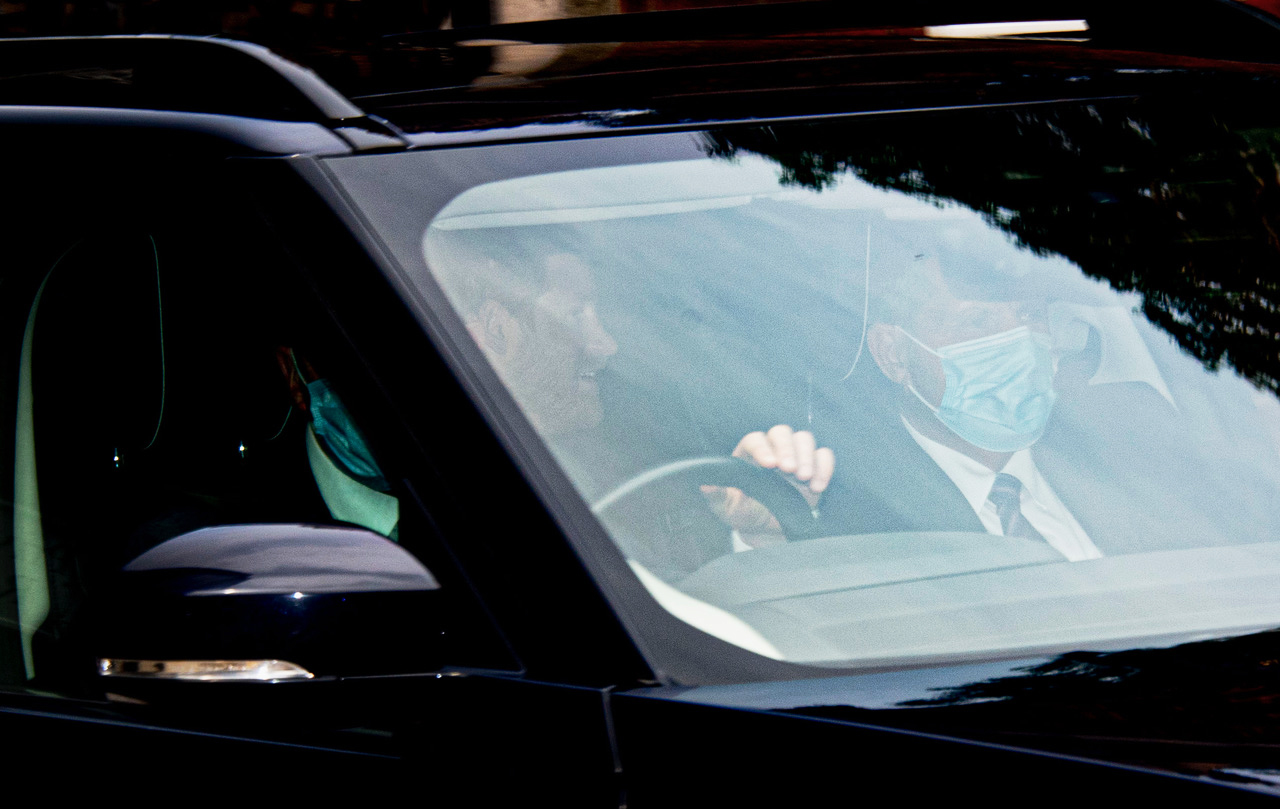 The pair even laughed and joked together as they came face to face for the first time since Prince Philip's funeral in April.

It appeared Harry and William had put aside their differences to honour Princess Diana and even shared a glass of bubbly after the event at around 2.45pm.

But just 20 minutes later, Harry was pictured driving out of Kensington Palace in a Range Rover.

It is not clear where the Duke of Sussex was headed next and may even have had plans to meet William and Kate Middleton for a long overdue heart-to-heart.

Alternatively, Harry could even pay the Queen a visit at Windsor Castle while he is staying at nearby Frogmore Cottage.

Her Majesty is thought to have missed seeing her grandson so far as he was self-isolating after arriving from the US and she was in Scotland yesterday on royal engagements.

But Harry may be keen to fly back to the US as soon as possible to see Meghan Markle, Archie and newborn daughter Lilibet. 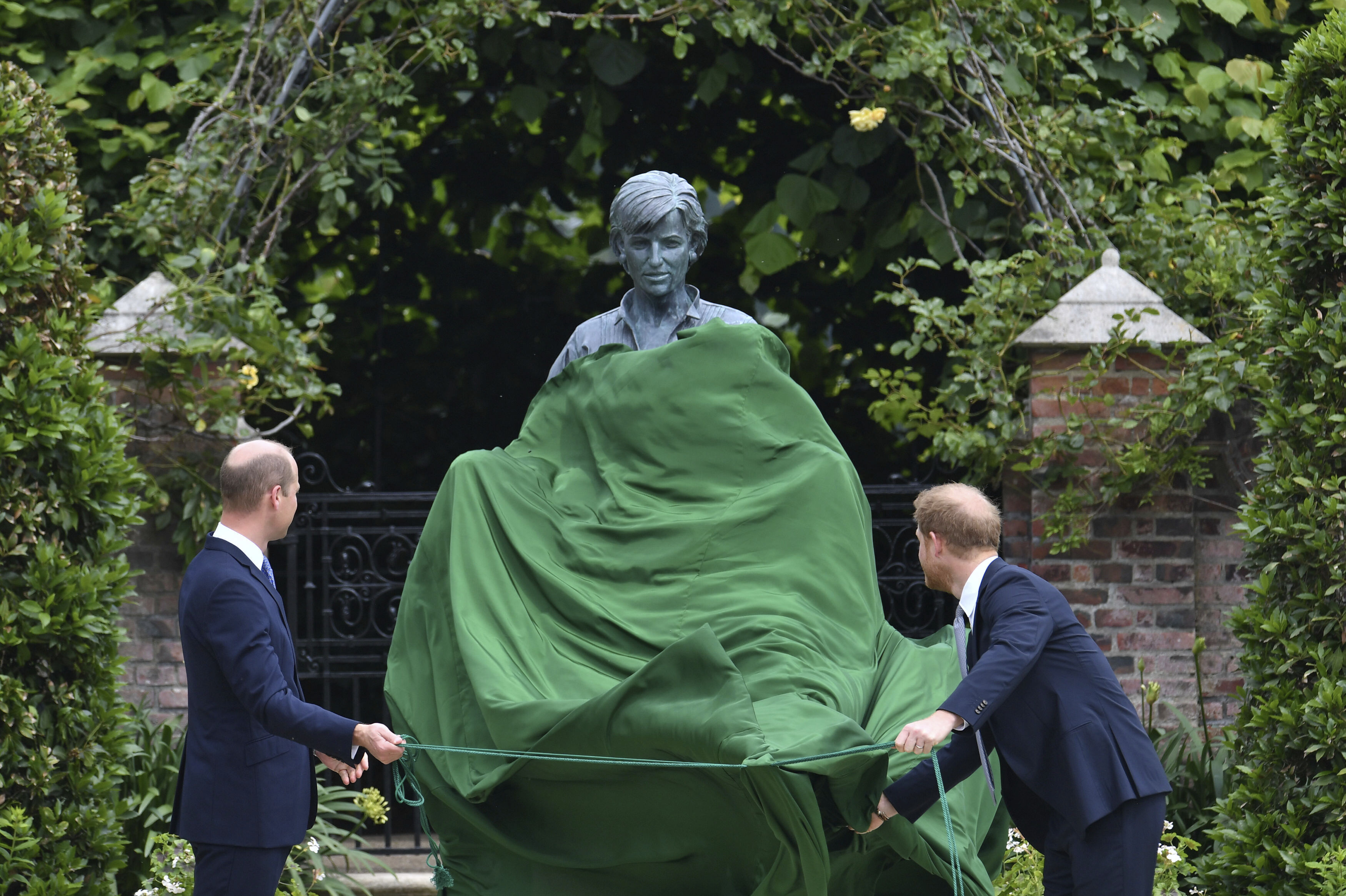 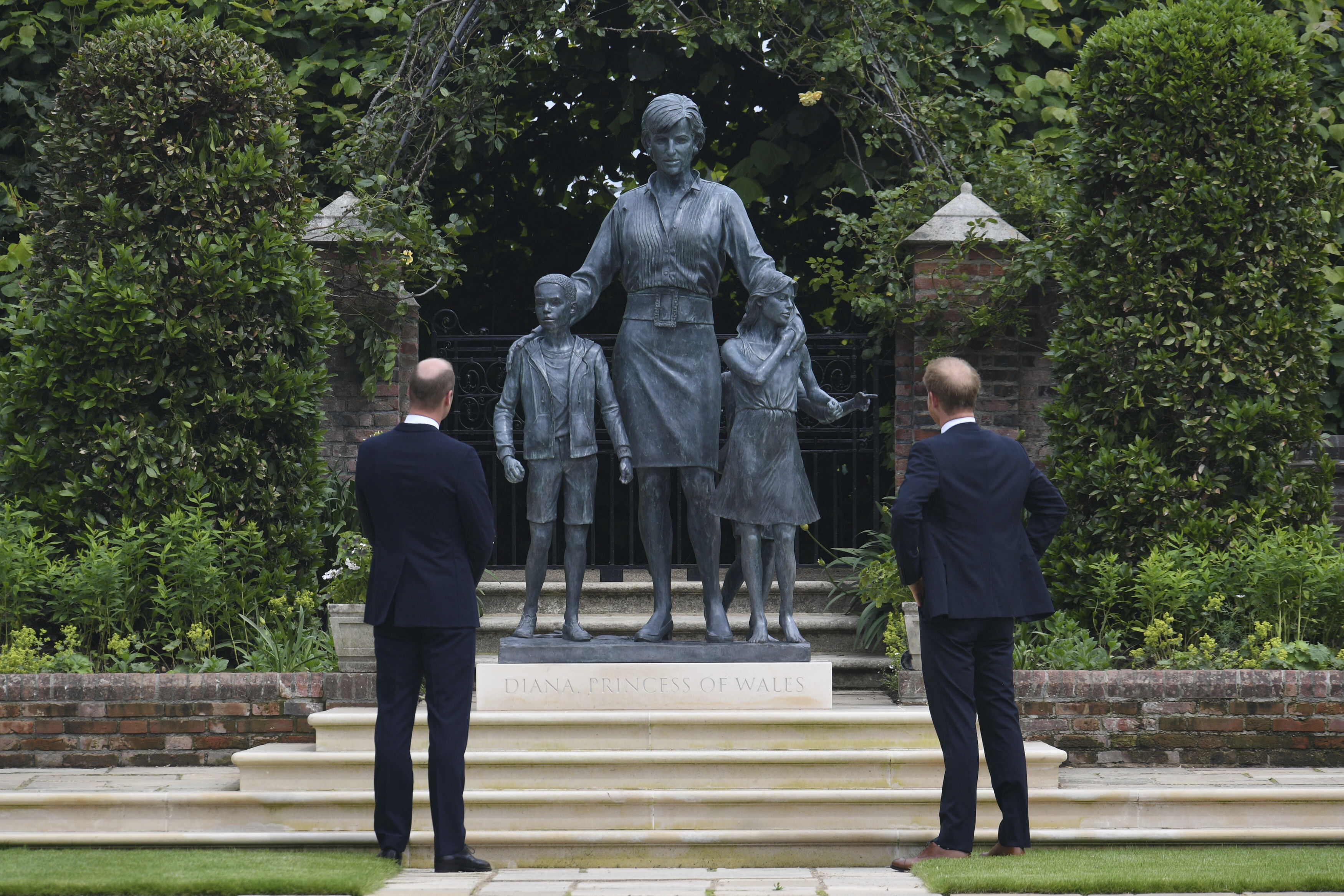 The dukes appeared close on Thursday afternoon – raising the hopes of millions that their feud may now be behind them.

But sources told The Daily Mail Harry was greeted by James Holt, a former Kensington Palace press officer and now the executive director of the Sussexes' Archewell Foundation, not William.

The brothers entered the Sunken Garden together, with the Duke of Sussex clapping his hands in anticipation as they approached the statue.

They were welcomed by Jamie Lowther-Pinkerton, their former private secretary, who is godfather to Prince George.

Both held the green curtain draped over the memorial and William asked "ready?" before they pulled it off in sync to reveal the touching artwork.

Timeline of the day

How the unveiling of the statue in memory of Diana, Princess of Wales, unfolded

1.32pm: Prince Harry arrived in a chauffeur-driven car through the gates of Kensington Palace.

2pm: The princes entered  the garden shortly with  former private secretary Jamie Lowther- Pinkerton as other guests lined up.

The statue to their mother Princess Diana is then unveiled.

Harry and William paused for around two minutes alone admiring the work before they were joined by the other guests — and continued to chat warmly.

They spent in total around six minutes with the statue.

3pm: The two brothers remained in the gardens until this time.

3.05pm: Prince Harry is driven out of the palace gates.

Prince William pointed to his sibling to wrap up and hand away the covering  as the small gathering of friends and family gave a short round of applause.

Wills stood with his hands clasped in front. Harry rested his hands on his hips — before he turned and opened his arms, spoke again to his brother and took several steps closer.

William responded briefly and kept his eyes on the statue as Harry gave a broad smile.

They paused for around two minutes alone admiring the work before they were joined by the other guests — and continued to chat warmly.

They spent in total around six minutes with the statue —  commissioned in 2017 — which they  signed off earlier this year. 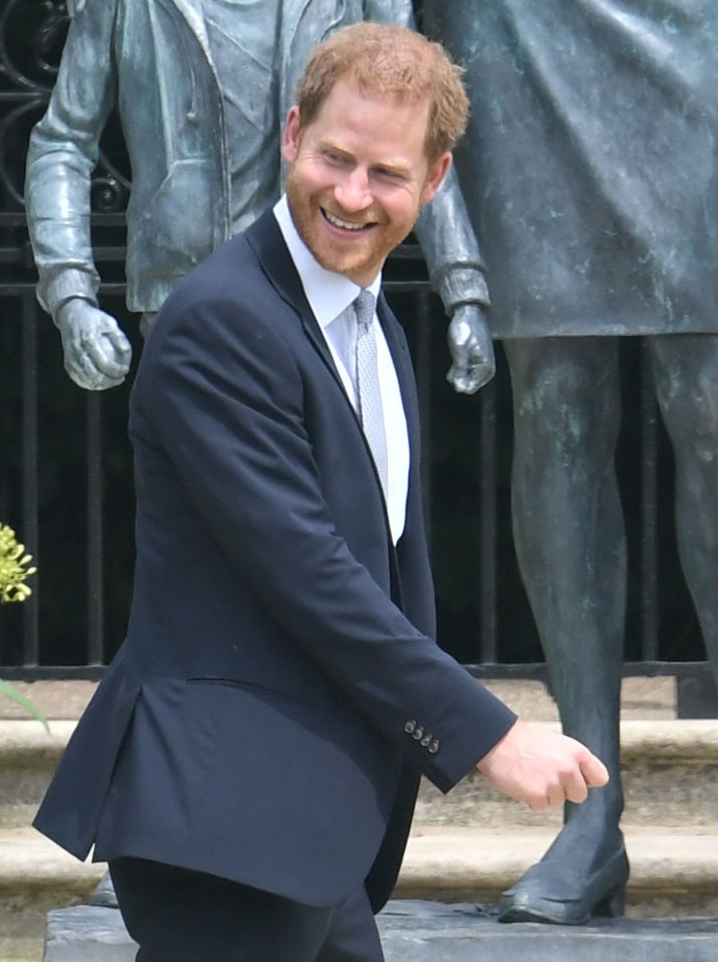 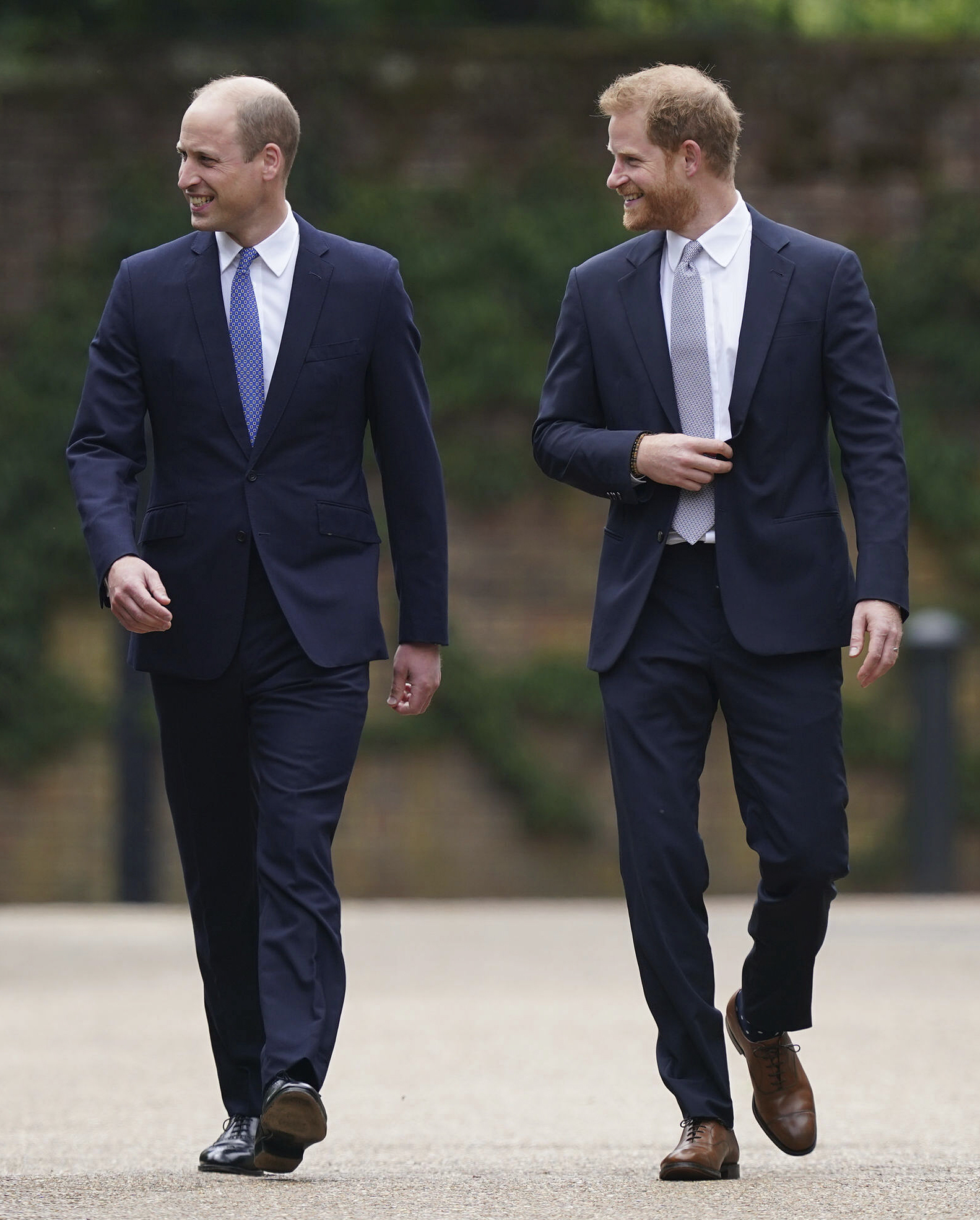 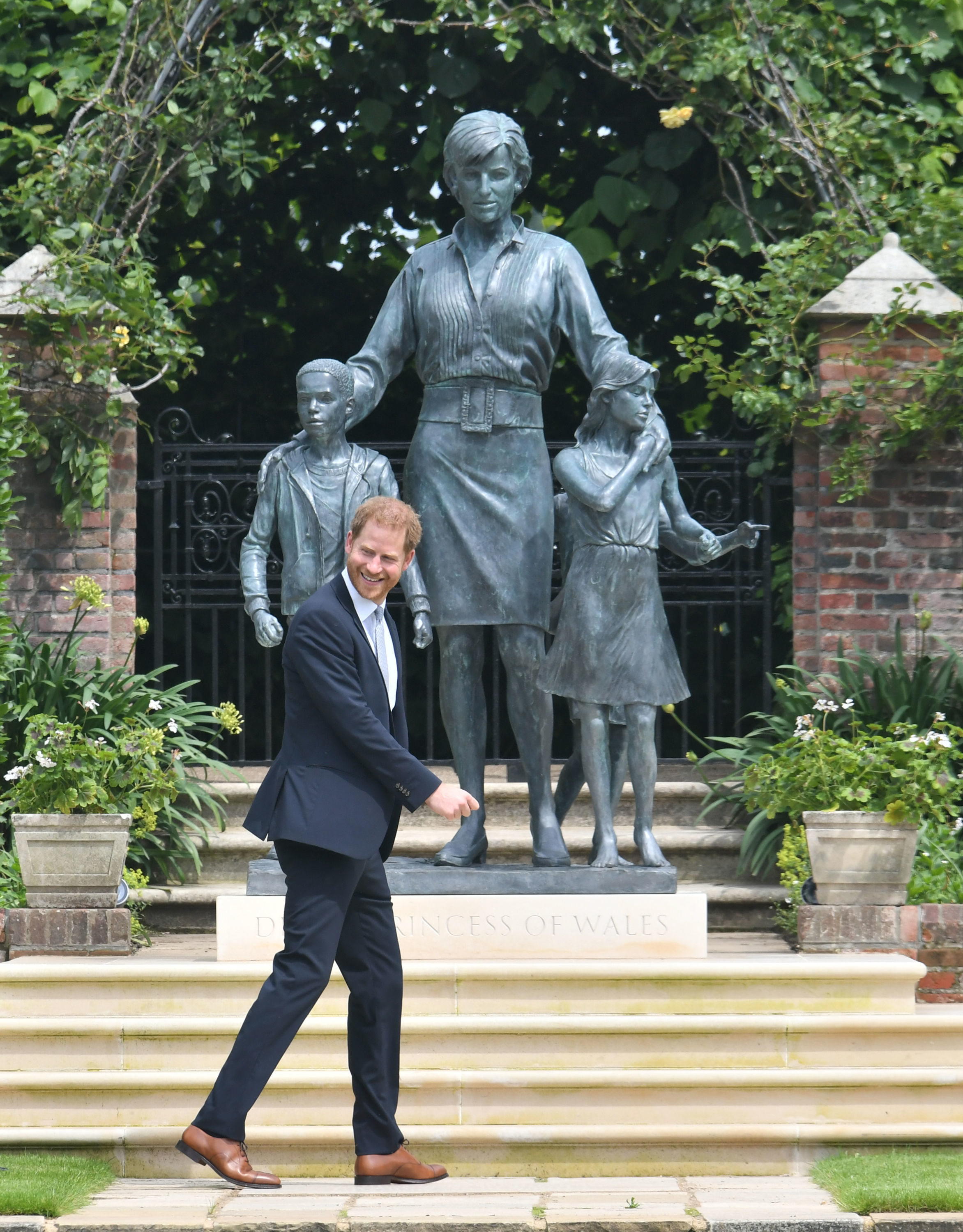 A round of applause echoed around the garden – a favourite place of Princess Diana's – as the statue was shown for the first time.

Harry joked with his mother's siblings, kissing his aunt Lady Sarah McCorquodale on both cheeks before proceeding to give two more mock-pecks as she wagged her finger at him.

He also laughed as he saw his aunt Lady Jane Fellowes and uncle Earl Spencer.

Covid restrictions meant only 13 guests were allowed in Kensington Palace’s Sunken Garden, and the princes’ only relatives there were on their mum’s side.

Sculptor Ian Rank-Broadley’s artwork is now up in the Sunken Garden, a  place Diana loved and which now boasts 4,000-plus  individual flowers.

The artist said Diana “was an icon who touched the lives of people right around the world so it has been a privilege to work alongside Prince William and Prince Harry”.

In a joint statement issued afterwards, the brothers said: “Today, on what would have been our mother’s 60th birthday, we remember her love, strength and character — qualities that made her a force for good around the world, changing countless lives for the better.

“Every day, we wish she were still with us, and our hope is that this statue will be seen for ever as a symbol of her life and her legacy. 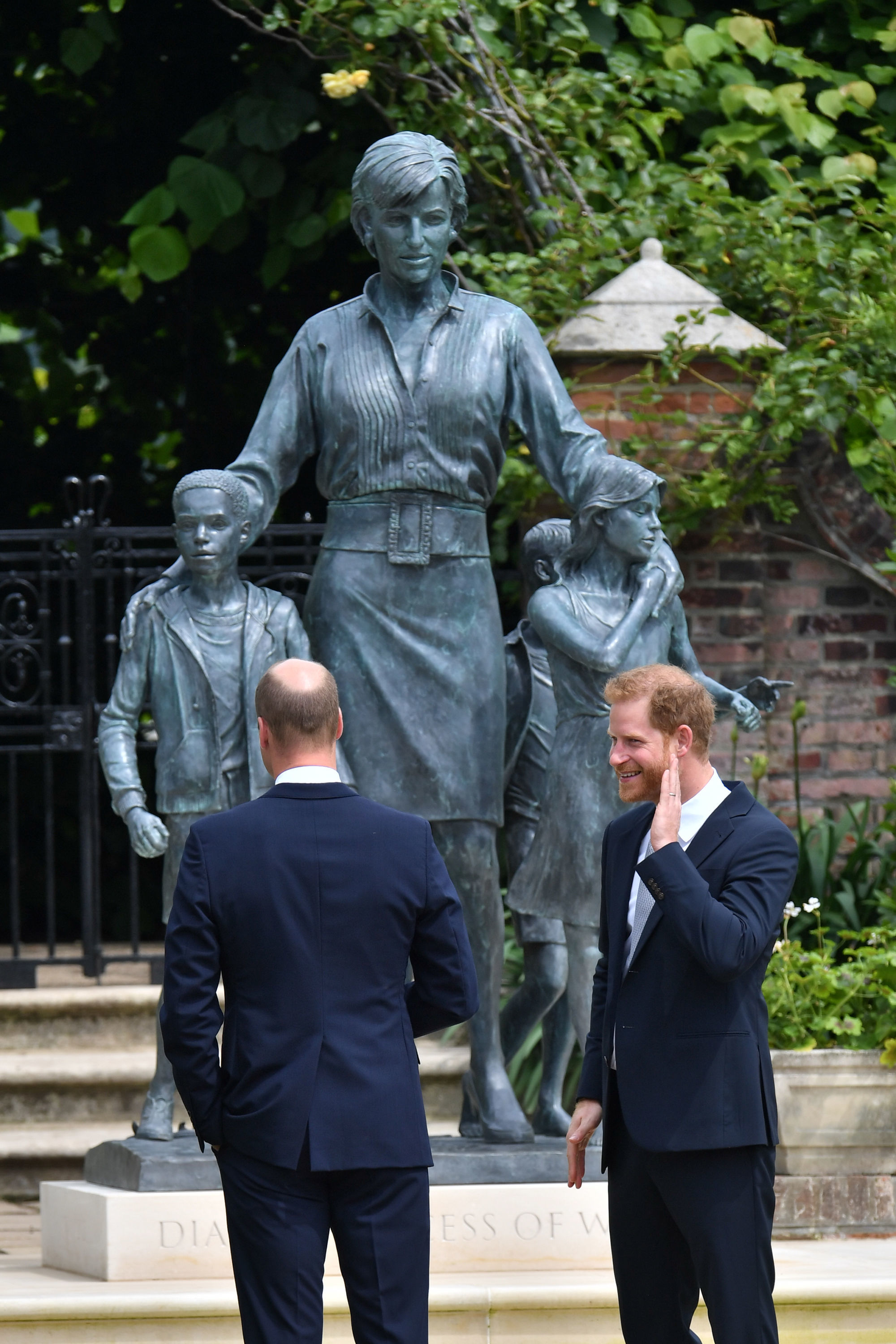 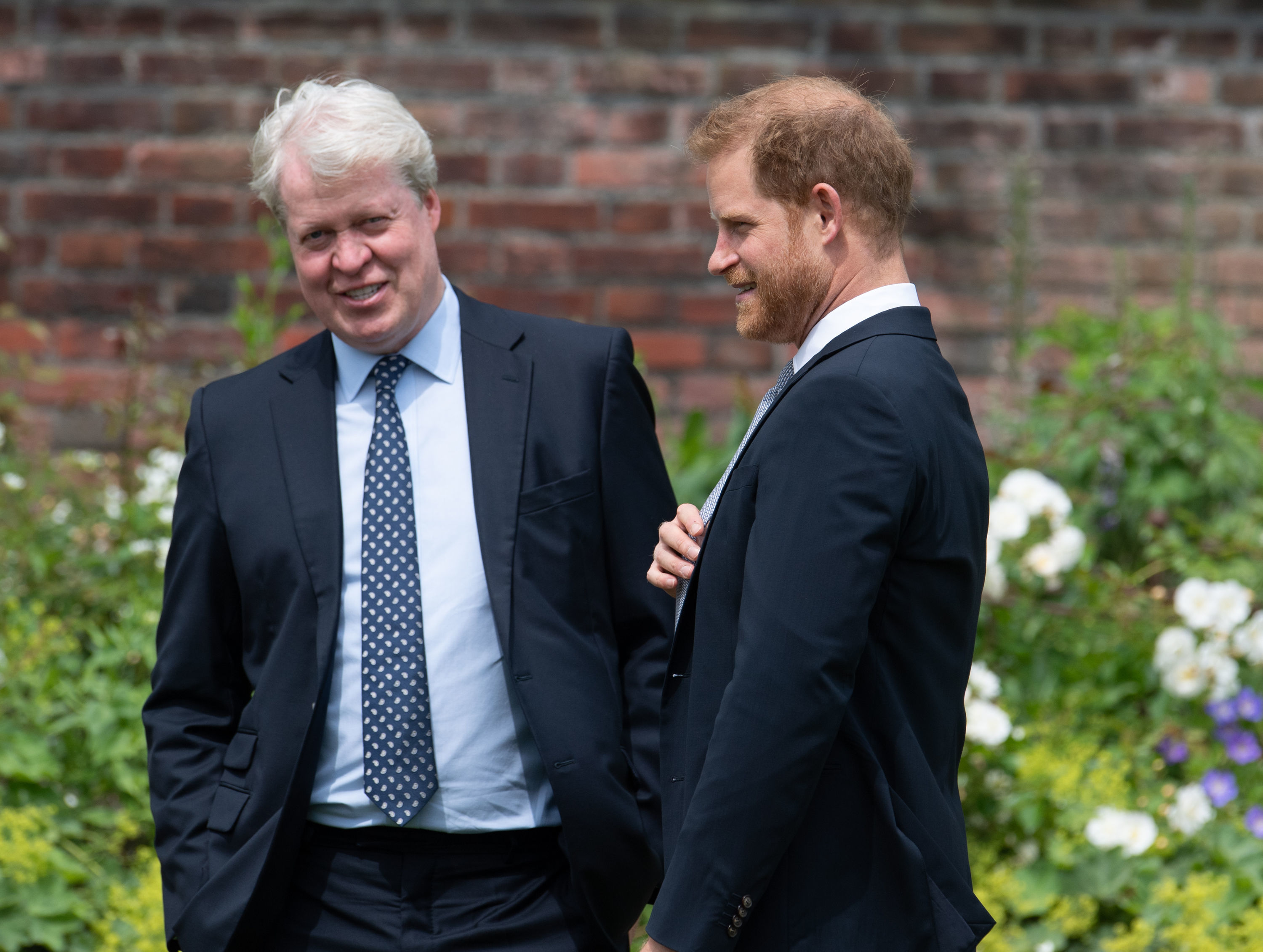 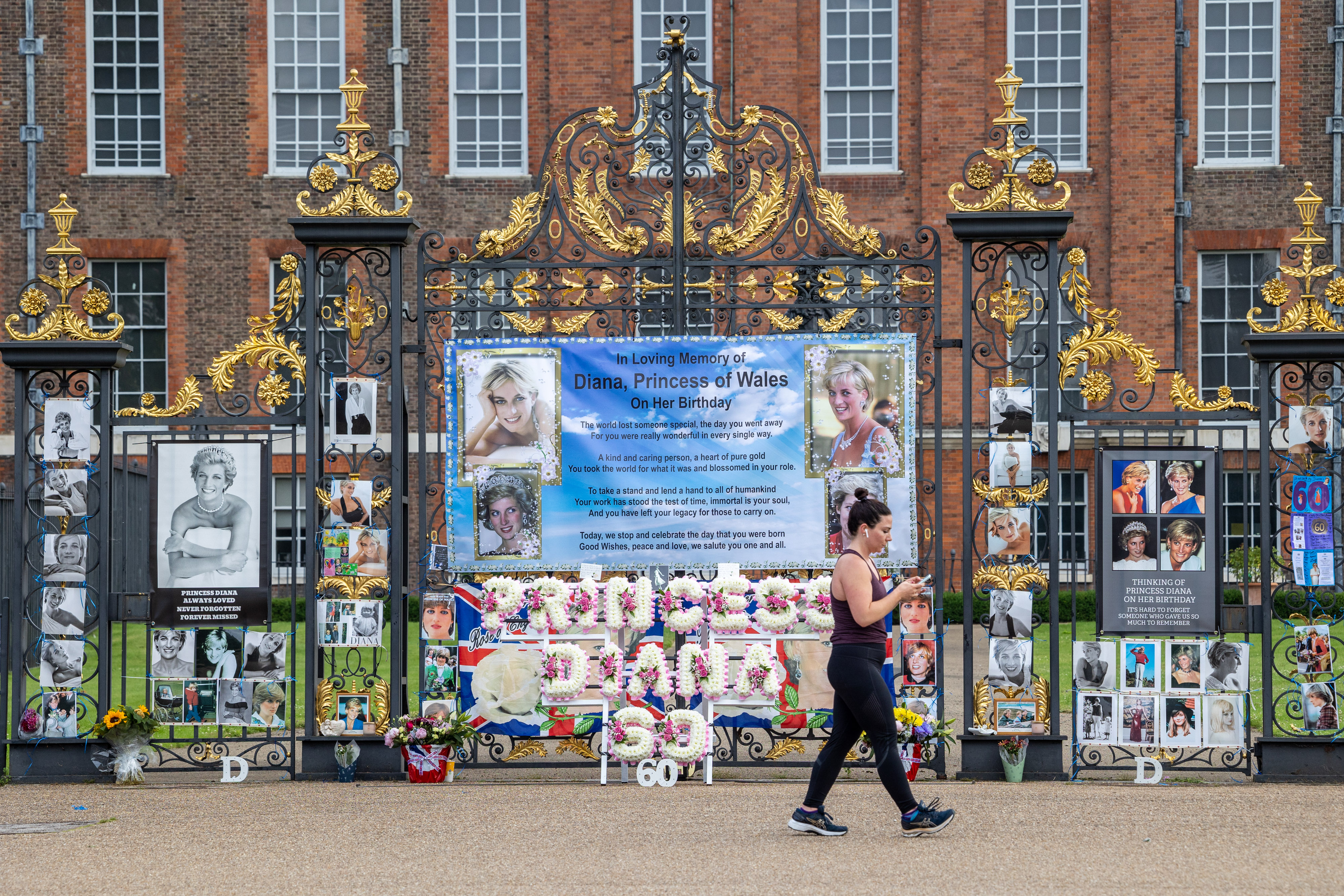 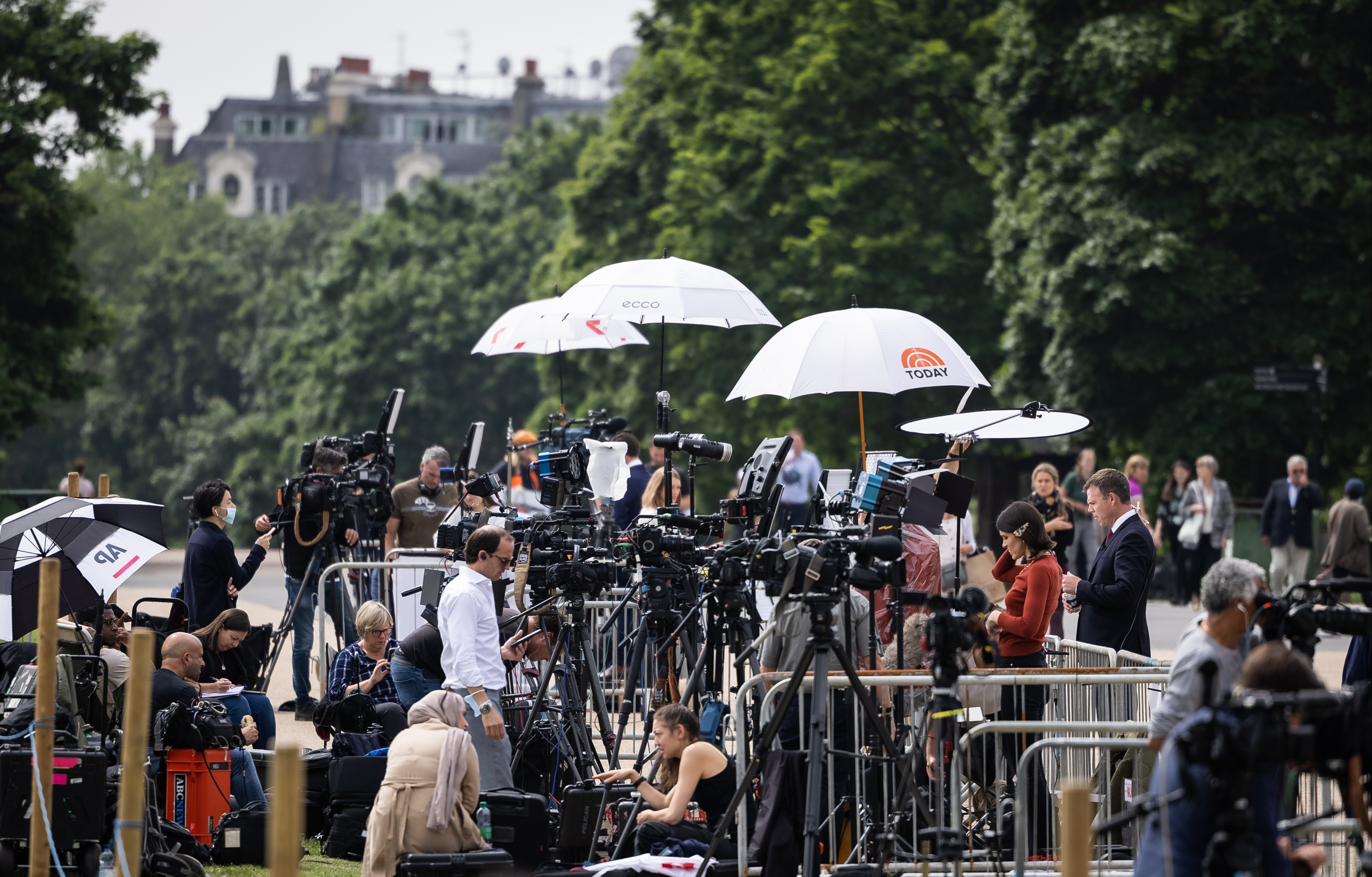 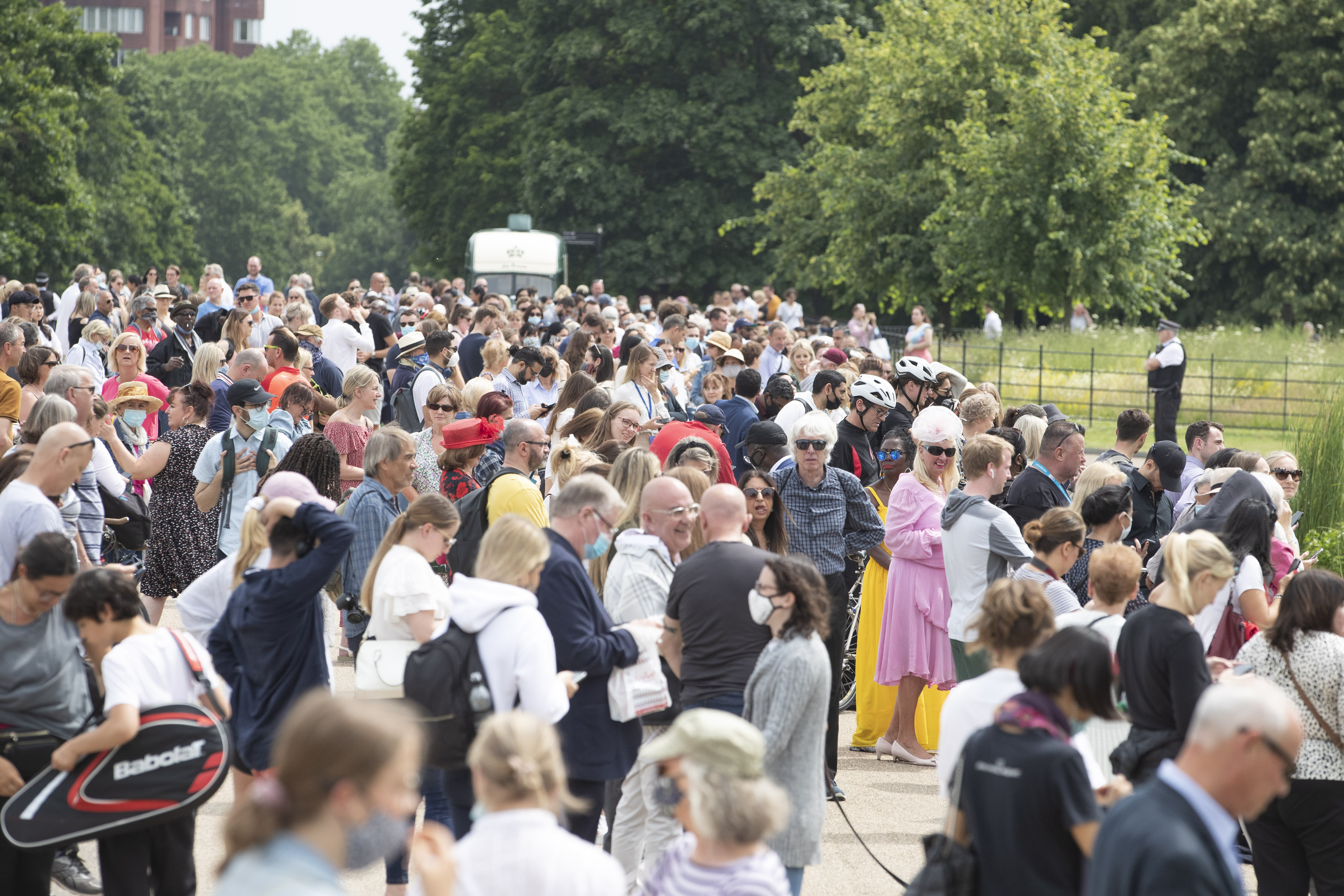 When did Princess Diana die and how old was she?

When was Princess Diana’s funeral and what have Prince William and Prince Harry said since?

Princess Diana engagement ring and jewellery: What happened to her collection?

Princess Diana young pictures: What was Lady Diana Spencer like as a child?

Princess Diana car crash: What happened in Paris in August 1997?

Why was Princess Diana in Paris when she died?

Princess Diana birthday: How old would she be today?

Where is Princess Diana buried and can you visit her grave?

When did Princess Diana and Prince Charles get divorced?

"Thanks to the friends and donors who helped make this happen, and to all those around the world who keep our mother’s memory alive.”

The bronze monument of Diana with her arms around two children with another little boy following behind is 1.25 times life size.

It is engraved with the words: "These are the units to measure the worth of this woman as a woman regardless of birth.

"Not what was her station? But had she a heart? How did she play her God-given part?"

Harry and William chose some of Diana’s favourite flowers to be planted by the statue, including 100 forget-me-nots, 200 roses, 300 tulips and 500 lavender plants.

The statue was unveiled on what would have been Diana's 60th birthday.

It portrays the princess with short cropped hair, which she had during the final period of her life before her tragic death aged just 36.

Diana was travelling through a Paris tunnel with Dodi Al Fayed on August 31, 1997, when her car crashed.

Prince William was aged 15 and Harry was just 12 when their beloved mother was killed. 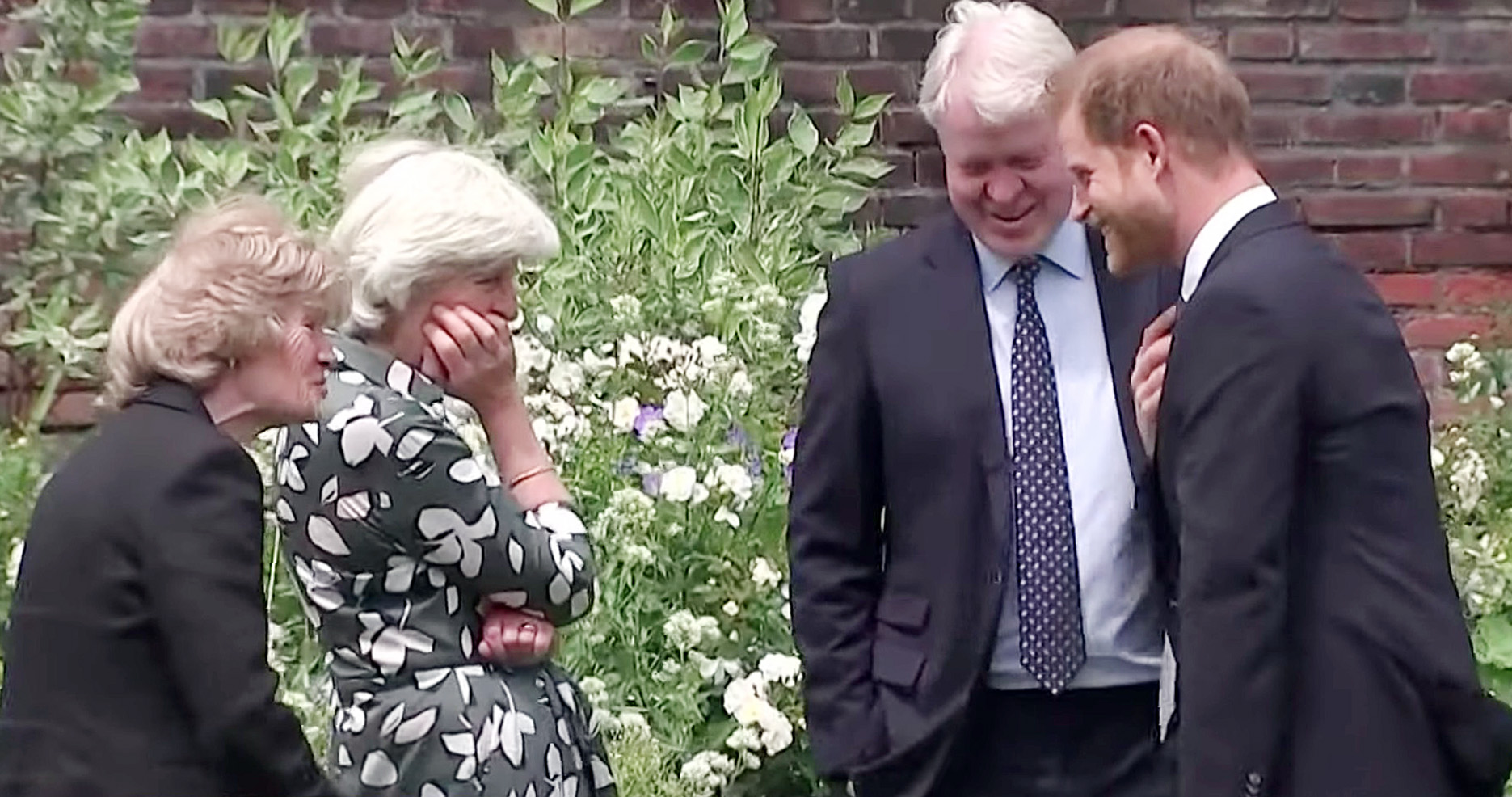 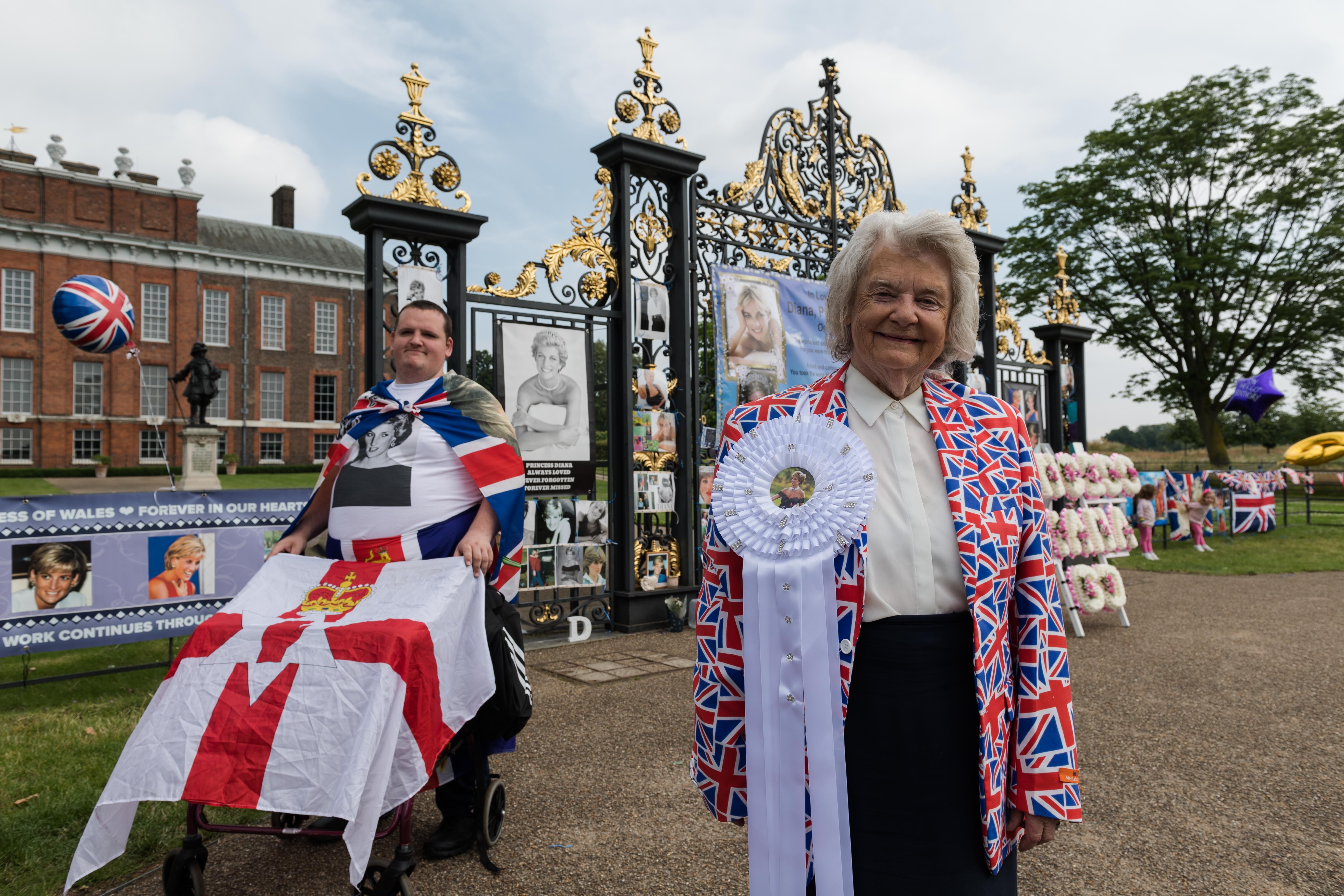 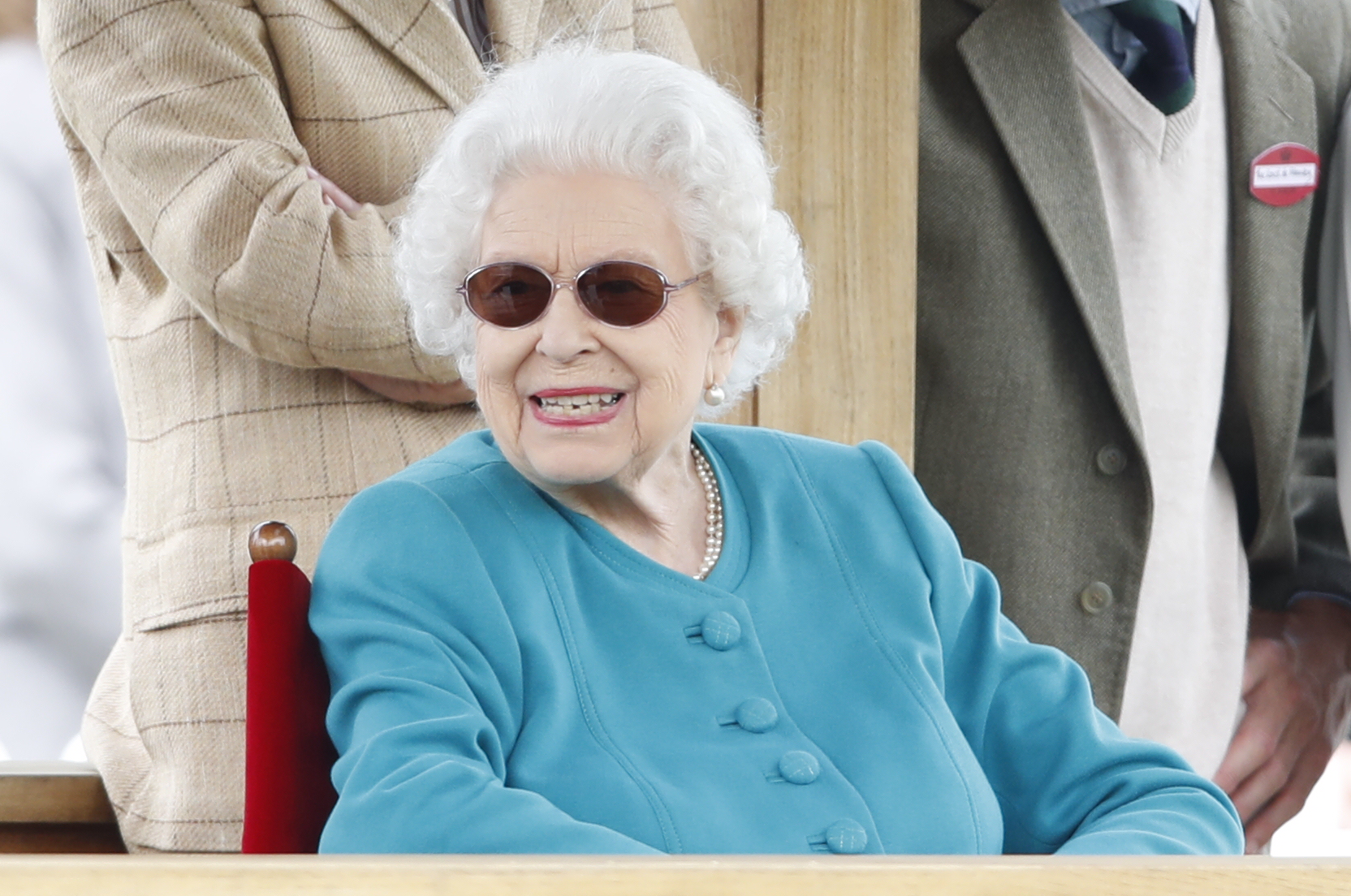