Prince William used a doll to practice before putting newborn Prince George in a car seat for his son’s first appearance outside St Mary’s Hospital, Kate Middleton has revealed in an intimate podcast interview.

The Duke of Cambridge won praise for the seamless way he put his newborn son Prince George into a car seat after his birth – but his wife has revealed they practised with a doll.

Kate shed light on how they made sure the global moment went without a hitch when she was interviewed on a popular podcast about motherhood. 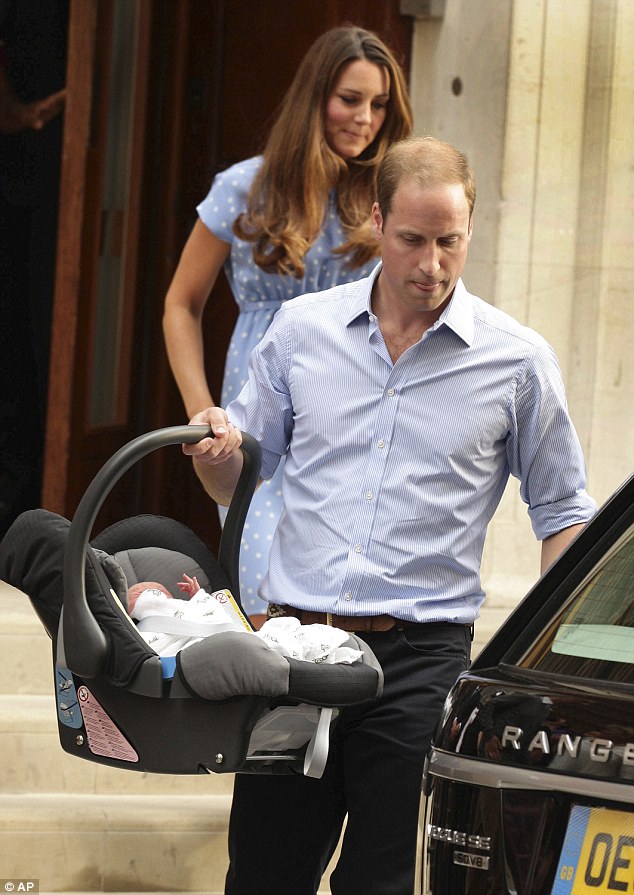 Prince William used a doll to practice before putting newborn Prince George in a car seat, Kate Middleton has revealed in a podcast with author Giovanna Fletcher. He is pictured leaving with George at the Lindo Wing of St Mary’s Hospital in London Tuesday July 23, 2013 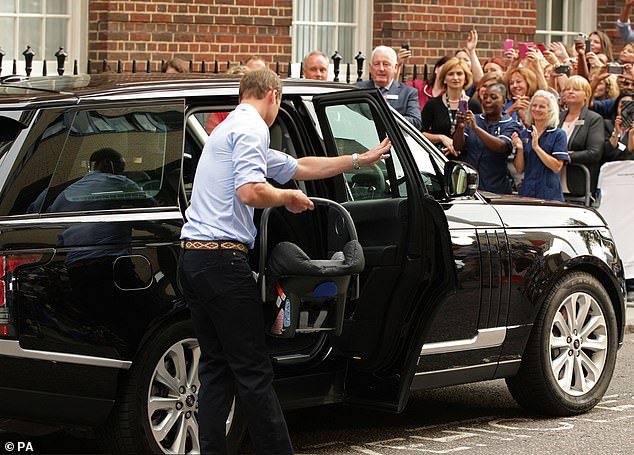 The royal couple felt it was ‘really important’ to share the public’s ‘joy and appreciation’ of Prince George’s birth. Pictured are hospital staff cheering and greeting the duke as he carries George into the car

As host Giovanna Fletcher said the duke had done a very good job putting his son safely on the car backseat, outside the private maternity unit in Paddington, London, Kate replied: ‘But he probably didn’t think so at the time.

‘We were like ‘What do we do – in a swaddle? How’s this supposed to work?’ We’d even tried to practise with a little baby, like a little doll, at home, but you know it just never works out the way you planned it so it was quite hard to do that on the world’s stage, but no, he did a very good job.’

Mrs Fletcher, who interviewed Kate for her Happy Mum Happy Baby podcast in January, but broadcast on Saturday, questioned the duchess about the birth of six-year-old George on July 22, 2013.

Kate described the moment William became a father as ‘really special’ and his face was of ‘pure joy’.

She confessed to feeling ‘slightly terrified’ about the hundreds of people waiting outside the Lindo Wing maternity unit, but said they felt it was ‘really important’ to share the public’s ‘joy and appreciation’ with them. 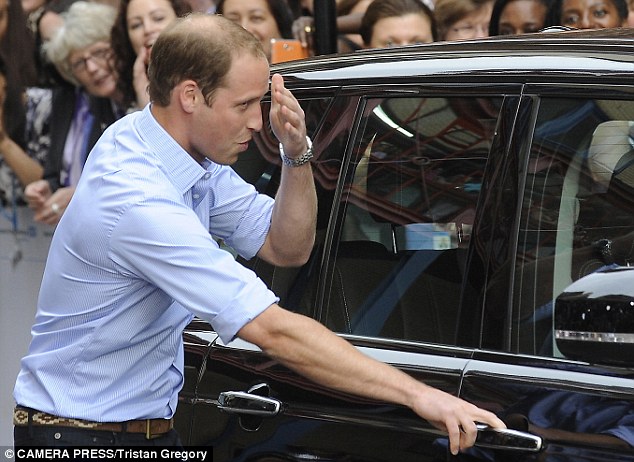 The Duchess admitted the royal couple were ‘slightly terrified’ about the hundreds of people waiting outside the Lindo Wing (pictured in 2013). Speaking on the Happy Mum Happy Baby podcast, she said: ‘We were like ‘What do we do – in a swaddle? How’s this supposed to work?’ We’d even tried to practise with a little baby, like a little doll, at home’ 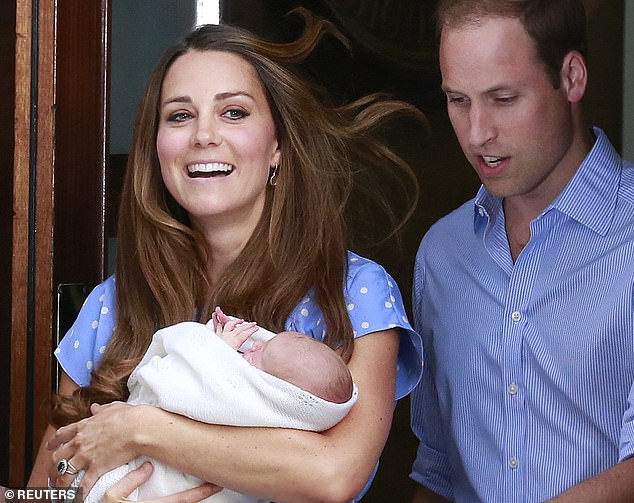 The Duchess beamed as she reflected on childbirth and how ‘you are pulled to your toughest and most unknown places’ on the programme, aired today. She is pictured emerging from the maternity wing with William in July, 2013

The duke drove his new family away from the central London hospital, but when they arrived home at Kensington Palace soon afterwards there was a little apprehension.

Kate said: ‘William was like ‘Oh my gosh is this what parenting is going to be like?’

‘It took us a bit of time to get ourselves settled and going again, but that’s the beauty, I suppose of having a newborn baby.

‘You are pulled to your toughest and most unknown places that you hadn’t necessarily even thought about before.’

Speaking about the first time she held George, the Duchess said: ‘Amazing, amazing. It is extraordinary as I’ve said. How can the human body do that? It is utterly extraordinary actually.’ 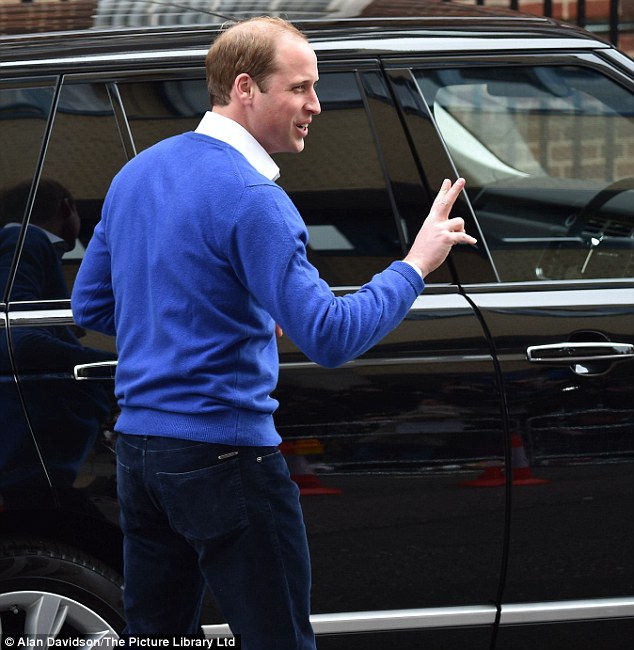 William is pictured waving to fans as he leaves St Mary’s Hospital in Paddington, London, with baby Charlotte in 2015. The Duke appeared apprehensive about parenthood after arriving home at Kensington Palace with George, telling Kate: ‘Oh my gosh is this what parenting is going to be like?’ 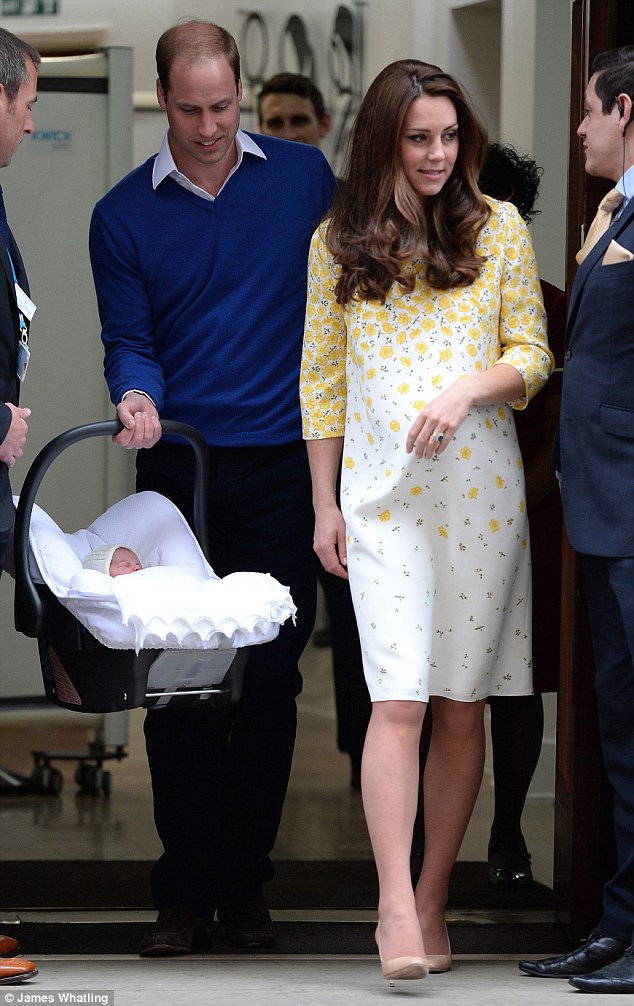 Mrs Fletcher, who has also written about being a mother to three children with husband Tom Fletcher, a member of the band McFly, chatted to Kate about childhood and her hopes for her three children, George, Princess Charlotte and Prince Louis.

The duchess said: ‘Someone did ask me the other day, what would you want your children to remember about their childhood?

‘And I thought that was a really good question because actually if you really think about that, is it that I’m sitting down trying to do their maths and spelling homework over the weekend?

‘Or is it the fact that we’ve gone out and lit a bonfire and sat around trying to cook sausages that hasn’t worked because it’s too wet?

a, doll, Prince, to, used, William
You may also like: