In a letter to Education Secretary Gavin Williamson, private schools have made it clear they could make a significant difference in the education received by pupils during the summer ahead of the Government’s proposed return to school in September.

The chief executive of the Independent Association of Prep Schools, Christopher King, wrote the letter in which it was explained that public schools were offering the use of their school buildings at little-to-no cost to parents.

The Sunday Telegraph reports though, that the Government has been reluctant to accept their help. 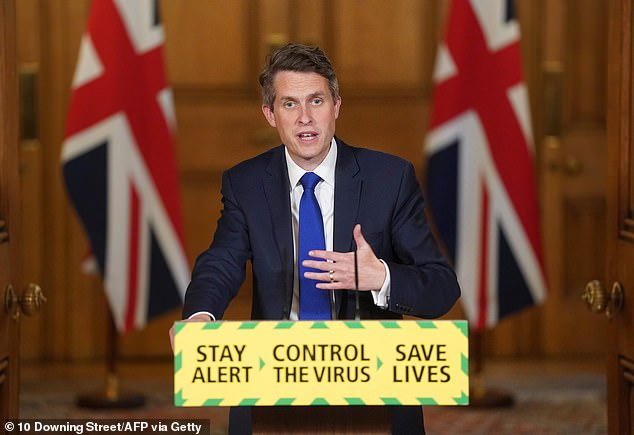 In a letter to Education Secretary Gavin Williamson (pictured), private schools have made it clear they could make a significant difference in the education received by pupils during the summer ahead of the Government’s proposed return to school in September

In the letter he said: ‘Online learning has been a huge success right across the private sector, the contrast with state schools is quite stark.’

The offer to use private schools’ facilities is likely to include the rental of marquees for their large grounds to ensure social distancing.

The letter follows research that suggests more than 2million children have done almost no work during the lockdown.

Julie Robinson, chief executive of the Independent Schools Council (ISC), said a number of fee-paying schools have greater capacity to help as their normal events bookings over the summer have been cancelled.

Six large independent schools – including King’s College School Wimbledon and Bury Grammar School – are already looking to run their own summer catch-up provision at their own cost, Ms Robinson said.

Highgate School will be offering a Summer school programme for up to 90 pupils from disadvantaged backgrounds at six local state schools in August.

Head Adam Pettitt said: ‘We will be offering lessons in core subject areas to bridge the learning gap for Year 10 pupils from our partner schools. These are some of the pupils who will have been impacted most by Covid-19.

‘They will have missed almost six months of schooling by September, and we want to make sure we are doing everything we can to counteract the emotional and educational disruption this has had on some of the most vulnerable children in our community.’

A spokesperson for the Department of Education said that the £1billion catch-up package being provided by the Government is directly targeted to ease the impact of lost classroom teaching.

Next week the Government is expected to announce that normal social distancing rules will not be enforced when pupils return to schools in September.