The Department of Health and Human Services has referred one of its own employee to police for investigation over the leaking of the state government's road map for easing COVID-19 restrictions.

Victoria Police confirmed on Thursday that it had received a referral from a government department over the unauthorised access of information. 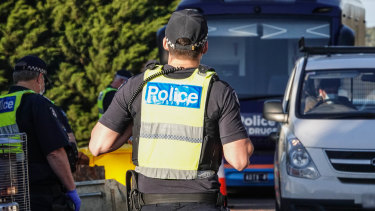 A government department has referred one of its employees to Victoria Police over the leaking of documents related to its plan for the easing of COVID-19 restrictions.Credit:Paul Rovere

"This matter is being investigated by the E-Crime Squad and as this investigation is ongoing, it would be inappropriate to comment further at this time," a police spokeswoman said.

The Department of Health and Human Services said it was aware of an alleged breach of the public service code of conduct by one of its employees, who provided broad administrative assistance.

"This is a police matter and it is therefore inappropriate for DHHS to comment further," a department spokesperson said.

The draft road map, which outlined the government's plans to ease Victoria's restrictions, was published by the Herald Sun on September 3, three days before Premier Daniel Andrews publicly unveiled the plan.

pol, Public, Referred, servant, to
You may also like: