Queen Consort is urged to not wear Cullinan diamond

Queen Consort Camilla is urged not to wear the Cullinan diamond during the upcoming state visit from South Africa’s president.

Trade unionists warn that if either Camilla or the Princess of Wales wore the diamond, which was previously worn by the late Queen Elizabeth II, it would be a ‘most unfortunate’ reminder of colonial-era mining.

Analysts told the The Telegraph that Camilla wearing the diamond would ‘shock’ President Cyril Ramaphosa and be ‘like spitting in the face of South Africans.’

Buckingham Palace has not yet confirmed what jewellery the Royal Family will sport during the state banquet on Tuesday.

The Cullinan Diamond, weighing 3,106 carats in its rough state, was first discovered in 1905 at a mine near Pretoria in South Africa.

It was later presented to King Edward VII as a gift and cuts were used in the Crown Jewels. Other cuts were used to make brooches, necklaces and earrings worn by royalty, including the Queen. 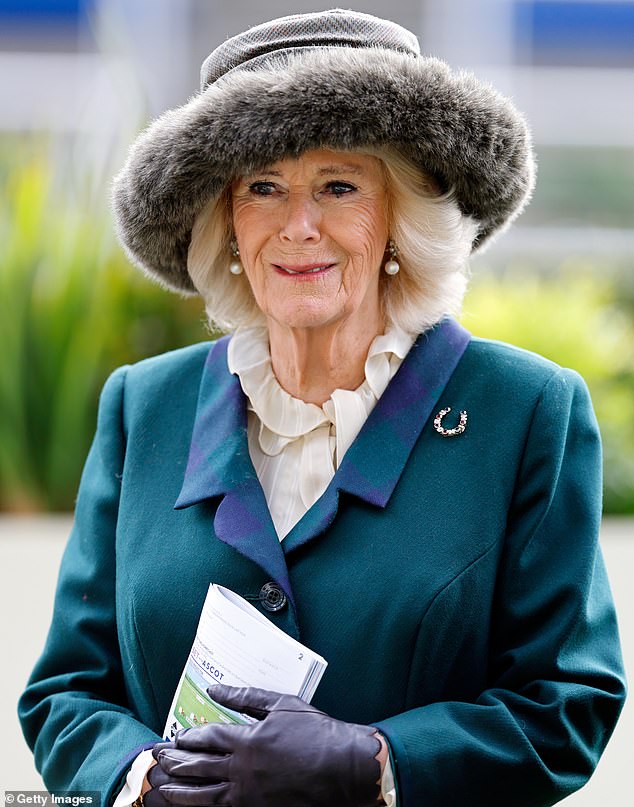 Zwelinzima Vavi, one of South Africa’s best known trade unionists, has warned the it would not be well-received if the royals chose to wear the Cullinan diamond during Mr Ramaphosa’s visit.

‘It would be most unfortunate and would be flaunting the history of Cecil John Rhodes in our faces,’ he told The Telegraph.

‘And, of course, the colonial era’s mining industry – a period where the minerals and the land were taken from us which we then had to fight for.’

Political analyst Susan Booysen echoed his claim, telling the newspaper: ‘Given South Africa’s history and the effects of the colonial period, especially within the mining industry, this would, I am sure, shock Mr Ramaphosa and many South Africans.’

Ms Booysen argued it was ‘hard to imagine’ the diamond would be worn, adding: ‘Surely, surely this would not happen.’

During his two-day visit, Mr Ramaphose – accompanied by his wife Tshepo Motsepe – is expected to view an exhibition of items from the Royal Collection that relate to South Africa.

Experts predict the exhibition will include medals presented to Queen Elizabeth by Nelson Mandela. 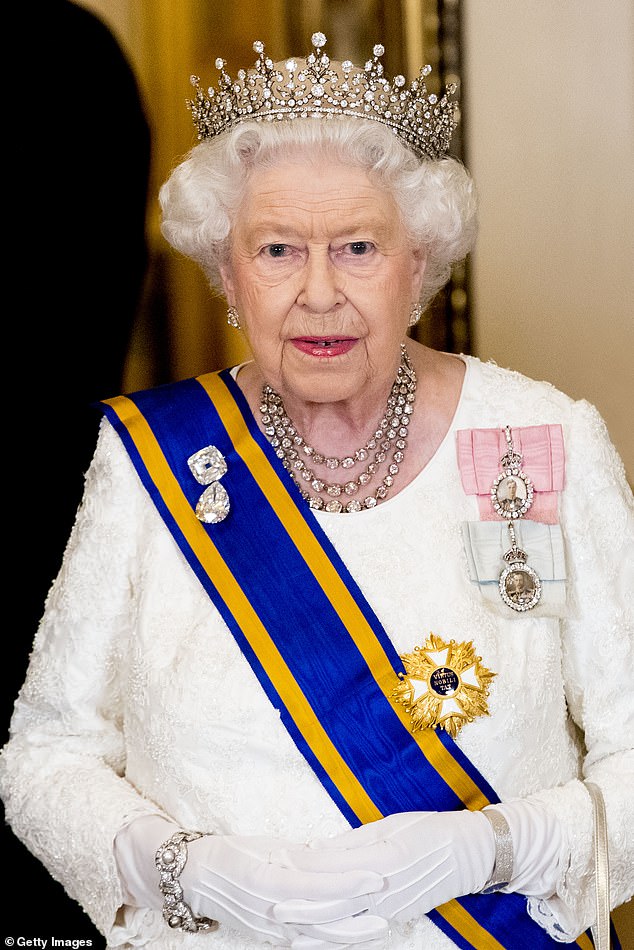 Trade unionists warn that wearing the diamond, which was previously worn by late Queen Elizabeth II, it would be a ‘most unfortunate’ reminder of colonial-era mining. The Queen is pictured wearing the Cullinan diamond during a state dinner in October 2018 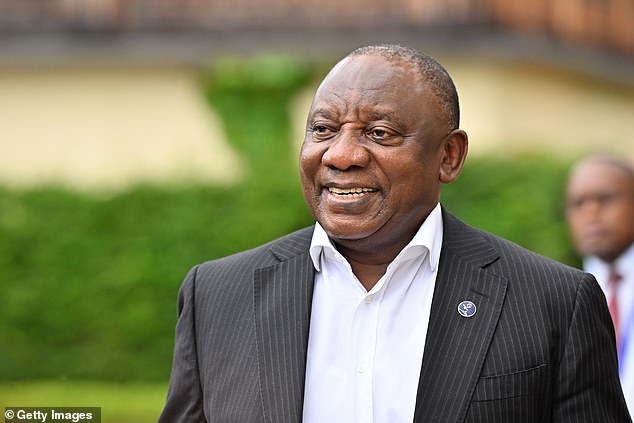 When the Cullinan diamond was mined in 1905, it looked nothing more than a worthless crystal – so much so that the manager of the Premier mine near Pretoria, South Africa, threw it out as rubbish.

It was only on closer inspection that staff were persuaded the piece of rock could be a genuine diamond. In fact, it turned out to be three times larger than anything discovered before.

Weighing 3,106 carats in its rough state and measuring 4in by 2.5in by 2.12in, the Cullinan – named after the chairman of the mining company, Thomas Cullinan – was also exceptional for its blue-white colour and purity.

Soon after it was found, it was sent to Buckingham Palace for inspection by King Edward VII.

For two years the stone remained a public wonder, but it was hard to find a buyer as there were doubts a stone so big could ever be cut. 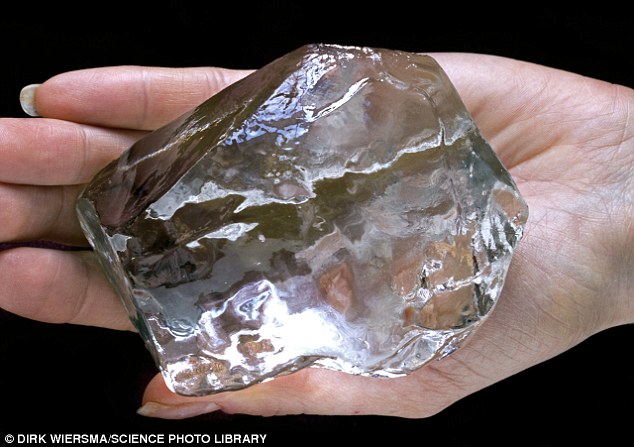 The Cullinan Diamond, weighing 3,106 carats in its rough state, was first discovered in 1905 at a mine near Pretoria in South Africa. Pictured: A glass model replica of the Cullinan diamond in its original rough state 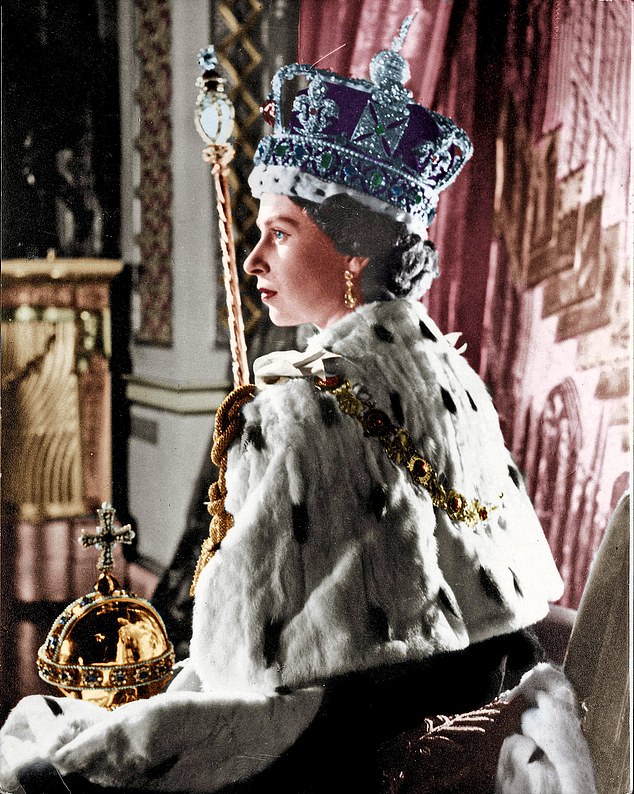 Queen Elizabeth wears the Imperial State Crown and holds the Sovereign’s Sceptre, both of which contain stones cut from the Cullinan Diamond during her Coronation in 1953 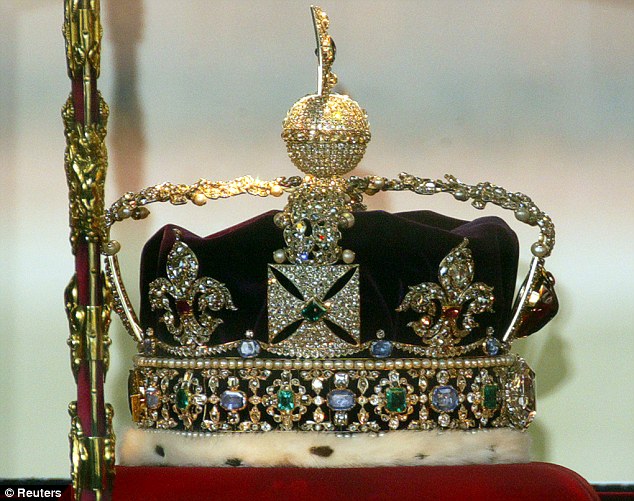 Eventually, the Prime Minister of the Transvaal – then a British colony – suggested his government should acquire the Cullinan and present it to Edward VII as a token of loyalty. In 1907 the uncut stone was brought to Sandringham House in Norfolk.

In 1909 the two largest gems – the biggest colourless and flawless cut diamonds in the world – were formally presented to King Edward VII at Windsor Castle and were eventually set at the head of the Sovereign’s Sceptre and in the Imperial State Crown.

The other seven were mounted for Queen Alexandra and Queen Mary – the King’s wife and daughter-in-law – and are contained in five pieces of jewellery.

Since Queen Elizabeth’s death, an online petition out of South Africa has called for the Cullinan diamond to be returned to the nation and placed in a museum.

The petition has received more than 8,000 signatures.