Stormzy has rescheduled the Asia leg of his Heavy Is The Head world tour due to the spread of coronavirus.

The grime star was due to play shows in Malaysia, Sinagpore, Japan, China and South Korea next month, but revealed today he would be postponing his visit due to health concerns.

He wrote on Instagram: ‘I was seriously looking forward to bringing the #HITH World tour to Asia and playing some epic sold out shows but due to the ongoing health and travel concerns surrounding the Coronavirus, I’m regrettably having to reschedule this leg of the Tour.

‘Information regarding the rescheduled dates will follow in due course. Please contact your local ticket vendor for any further queries. I promise I’ll be back.’ 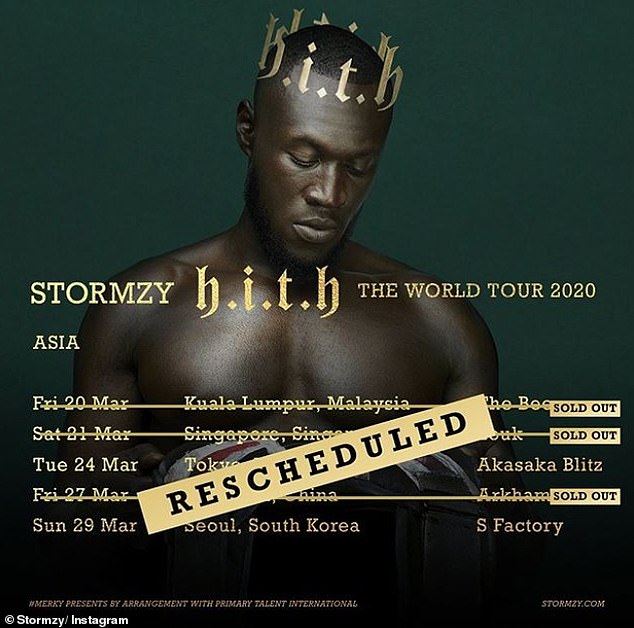 Stormzy was due to play shows in Malaysia, Sinagpore, Japan, China and South Korea

He was due to perform in Kuala Lumpur, Singapore, Tokyo, Shanghai and Seoul between March 20 and 29.

His next show will be in Berlin on February 20.

Stormzy kicked off his world tour in Belgium on February 10 and will arrive in the UK at London’s O2 Arena in September.

The tour accompanies the release of the musician’s second studio album, a follow-up to his acclaimed Gang Signs and Prayer.

His announcement comes shortly after the Mobile World Congress, the world’s biggest phone show, was cancelled due to concerns about coronavirus, officially named Covid-19 by the World Health Organisation.

It was due to take place in Barcelona later this month.