The World Health Organisation reported a record one-day increase in global coronavirus cases on Sunday, with the total rising by 307,930 in 24 hours. India leads the world in new cases reported each day and set a global record last week with 97,570 new cases in one day, according to a Reuters tally.

Coronavirus infections are still rising in 58 countries, including surges in Argentina, Indonesia, Morocco, Spain and Ukraine, according to a Reuters analysis. New cases are falling in the United States and are down about 44 per cent from a peak of more than 77,000 new cases reported on July 16. Cases in Brazil are also trending downward. 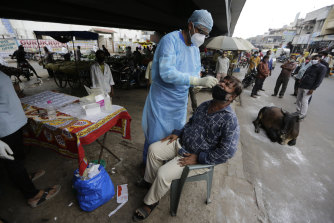 A health worker takes a nasal swab sample to test for COVID-19 in Ahmedabad, India, where cases are growing faster than anywhere else in the world. Credit:AP

India said on Sunday it was considering granting an emergency authorisation for a novel coronavirus vaccine, particularly for the elderly and people in high-risk workplaces, as its tally of reported infections passed 4.75 million.

Health Minister Harsh Vardhan said the timeline on Phase III trials could be shortened by giving emergency authorisation but stressed no corners would be cut in clinical trials and that a vaccine would only be made available when the government could ensure its safety and efficacy.

He said no date has been set for a vaccine launch results of trials should be clear by the first quarter of 2021.

Main streets were less crowded in Jakarta as Indonesia’s capital began two weeks of social restrictions Monday to curb a rise of coronavirus infections that has pushed its critical-care hospital capacity to unsafe levels.

Jakarta Governor Anies Baswedan announced the restrictions on Sunday, to last from Monday to September 27, to combat a virus outbreak he called an emergency situation.

Social, economic, religious, cultural and academic activities will be restricted, with 11 essential sectors, like food, construction and banking, allowed to operate with health protocols and 50 per cent of usual staffing levels.

Baswedan said last week the hospital capacity for isolation and intensive-care rooms has exceeded the safe limit and is estimated to reach the maximum capacity on Thursday.

New Zealand will keep its virus restrictions in place for at least another week as the country continues to battle a small outbreak that began in Auckland last month.

Prime Minister Jacinda Ardern said on Monday the country had taken a cautious approach to the virus from the beginning, which had helped save lives and allowed the economy to reopen in a sustained way.

Ardern said New Zealand will continue its strategy of trying to eliminate the virus. Under the restrictions, everybody must wear masks on public transport and planes, and the sizes of most gatherings are limited to 10 in Auckland and 100 elsewhere.

Health authorities announced one more case of the virus on Monday, bringing the number of active cases to 96.

South Korea has reported its lowest daily virus tally in about a month as it began easing its tough social distancing rules in the greater Seoul area.

The Korea Disease Control and Prevention Agency said the 109 new cases took the country’s total to 22,285 with 363 deaths. The daily increase has stayed in the 100s for 12 straight days, but Monday’s increase was the lowest since mid-August.

The government on Sunday relaxed its physical distancing guidelines in the Seoul area, citing a downward trend in new infections and economic worries.

The rules effective Monday allow customers to eat and drink inside franchise cafes and bakeries and indoor gyms and after-school academics can reopen. A ban on late-night dining at restaurants was also lifted. Distancing and masks are still required.

cov, in, increase, one-day, record
You may also like: