California woman, 33, who broke Everest climbing record after taking just two weeks to scale the mountain tells how she saw four corpses during her expedition and says rules must change to stop deaths

The California woman who set a record for fastest climb up Mt. Everest last week recalled seeing four dead bodies during her ascent and called on regulators in Nepal to make protocol changes to prevent more deaths.

Vogul works as a nutrition and performance research manager at GU Energy Labs, a sports nutrition products company based in Berkeley, according to the Washington Post. She is also an experienced climber who had scaled the tallest peaks on five continents prior to topping Everest.

In preparation for climbing the world’s tallest mountain, the 33-year-old spent three years climbing other peaks and training her body, enduring a rigorous exercise and acclimatization regimen known as ‘lightening ascent’ protocol that helped her cut the time needed to climb Everest in half. 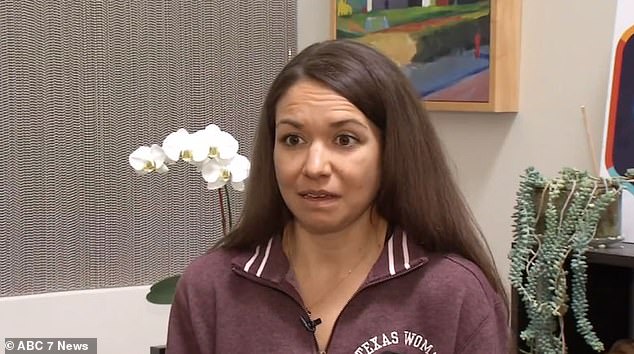 Roxanne Vogel, 33, of Berkeley talks with a reporter from ABC 7. The adventurous thrill-seeker finished scaling Mt. Everest last week in a record time of just 14 days. The expedition takes most experienced climbers about two months 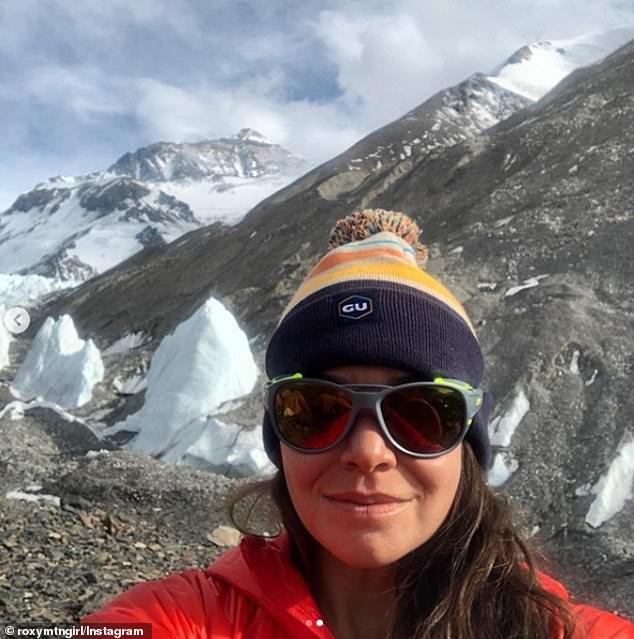 Vogul works as a nutrition and performance research manager at GU Energy Labs, a sports nutrition products company based in Berkeley, California 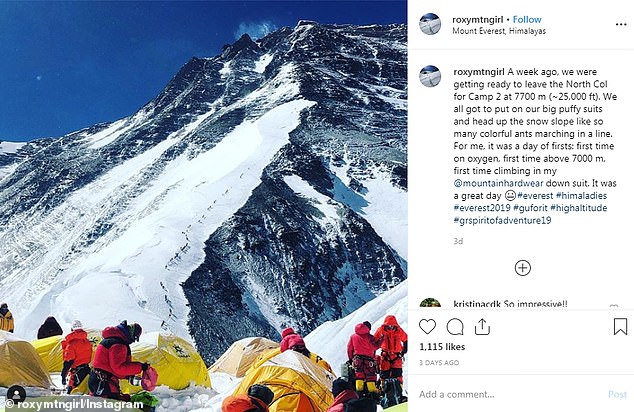 After going through so much prep work, Vogul was as shocked as the rest of the world last week when a photo of dozens of Everest climbers standing in line near the peak of the mountain went viral.

While most tourists climbing Everest do so from the mountain’s southern Nepalese side, where permits currently have no experience requirements, Vogel’s team made the climb on the mountain’s northern Tibetan side were there are no lines and permits are limited.

‘You can absolutely look at the north as the way things ought to be, just that freedom of being in the mountains alone is a feeling unlike anything else,’ Vogel told ABC 7 in an interview that aired Thursday night. ‘I can’t imagine waiting in a line to get to the top to take a picture,’ she said.

This year, the Nepalese government issued a record 381 permits to scale Everest, costing $11,000 each, according to Reuters. Climbers spoke of traffic jams below the summit, in the ‘death zone’ above 8,000 meters where many deaths occur due to the lack of oxygen.

‘Confident climbers with experienced guides and sherpas would have known about the jam and waited for their chance to go up safely,’ Adrian Ballinger of the US-based company Alpenglow Expeditions said in a Reuters interview.

A record-setting 11 people died climbing Mt. Everest in May.

A total of nine climbers have died on the mountain’s Nepalese side, the most during a climbing season on the peak since a deadly earthquake in 2015, according to Reuters.

They include Utah climber Don Cash, 55, who collapsed and died during his descent after climbing Everest on May 22. Cash’s family told the Salt Lake Tribune they believe he died form cardiac arrest. His body could not be recovered. 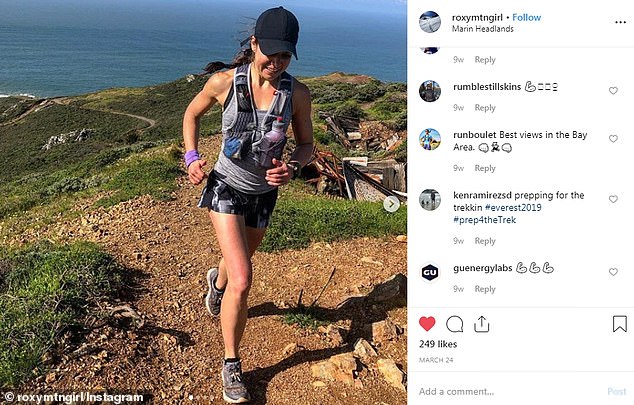 In preparation for climbing the world’s tallest mountain, Vogul spent three years climbing other peaks and training her body for the Everest expedition and endured a rigorous training and acclimatization regimen known as ‘lightning ascent’ protocol that helped her cut the time needed to climb Everest in half 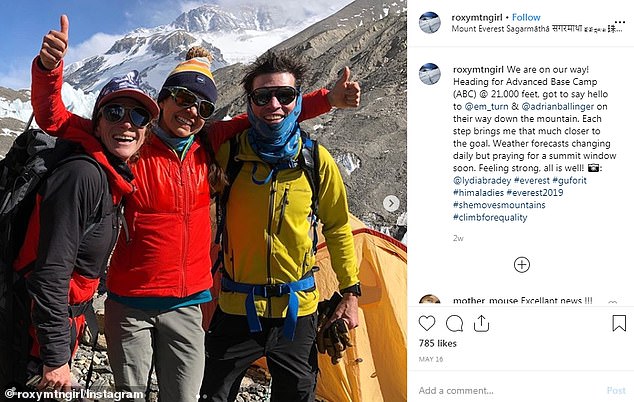 A picture of Vogul (center) on Everest with two climbing companions

Colorado climber Christopher Kulish, 62, died shortly after getting to the top of Everest on Monday, attaining his goal of scaling the highest peaks on each of the seven continents, according to his brother, Mark Kulish.

Cash and Kulish were experienced mountaineers, but many attempting to climb Everest are not.

Vogel recalled seeing corpses during her own expedition.

‘On my summit day, I saw four bodies. They would be within a few feet of me. So you have to stop and stand there and be next to the body doing what you’re doing and it’s really eye opening,’ she said.

Since flying back to California, she’s begun the process of making plans to travel to Antarctica so she can climb the frozen continent’s tallest mountain, the Vinson Massif, and joining the late Kulish in the elite ‘7 Summit Club’ of climbers who’ve scaled the tallest peaks on all seven continents. 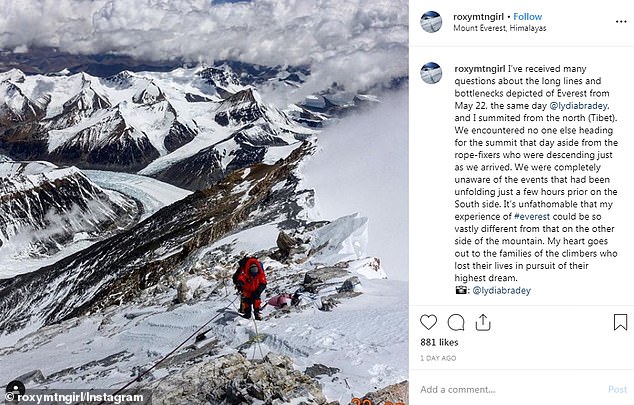 A picture of Vogul climbing Everest that was posted on her Instagram page. Since flying back to California, Vogul begun the process of making plans to travel to Antarctica so she can climb the frozen continents tallest mountain, the Vinson Massif, and joining the late Kulish in the elite ‘7 Summit Club’ of climbers who’ve scaled the tallest peaks on all seven continents 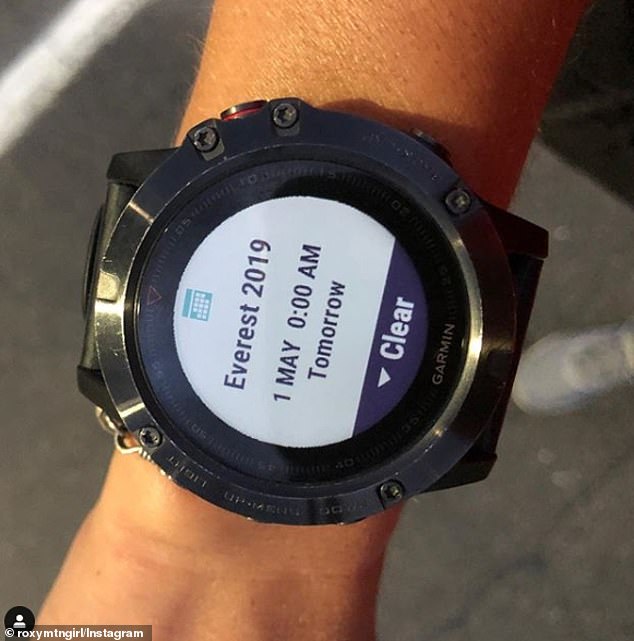 A photo on Roxanne Vogel’s Instagram page. Vogel suggested Nepalese regulators issue mandates requiring climbers to have health checks and a minimum amount of climbing experience before attempting to scale the world’s tallest mountain, but emphasized climbers who want to should be permitted to take the risk.

Some Everest trekking companies perform health checks on prospective clients before beginning expeditions, but there is no mandatory requirement to do so, Reuters reported. Operators have urged Nepal’s government to cut the number of permits and raise the price to around $20,000 to combat increased crowds.

But she emphasized climbers who want to should be permitted to take the risk.

‘There are other ways to climb the mountain, or doing an accelerated itinerary, it doesn’t have to be what you saw on the [Nepalese side of Everest] this year,’ she said. ‘I think people who are serious about climbing or really want to climb Everest for the right reasons, I don’t think they should be deterred from doing that because of what happened this year.’