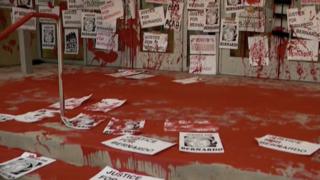 Protesters in Utah who splashed paint on a prosecutor’s office could be given life sentences after they were accused of acting as a “gang”.

Critics, including the city’s mayor, have called the felony charges excessive.

The paint splashing occurred during a 9 July protest against racism.

According to Utah’s criminal code, the “gang enhancements” felonies Mr Gill filed are applied to “offences committed in concert with two or more person or in relation to a criminal street gang”.

In effect, prosecutors are “calling participants in a protest gang members,” a lawyer for the American Civil Liberties Union told AP.

Mr Gill, a Democrat who says he declined to charge other Black Lives Matters protesters for curfew violations, downplayed the potential serious life sentence such charges carry. He did not think “anyone is going to be going to prison on this,” he said. Plea deals are said to be often used in cases such as these to avoid a full sentence.

“There’s some people who want to engage in protest, but they want to be absolved of any behaviour,” Mr Gill said.

“This is not about protest. This is about people who are engaging in criminal conduct.”

“While I believe there should be consequences for breaking the law, the potential to spend life in prison for buying paint is too severe,” she said in a video on her Twitter account.

Seven suspects are face first-degree felonies for allegedly buying or transporting the paint, splashing it on the government property or breaking windows, according to the Salt Lake Tribune.

Lawyers for the accused told the newspaper the charges were retaliatory and a conflict of interest, because the protest took place at Mr Gill’s office and protesters have repeatedly called him out by name.

Mr Gill agreed that it was “not the ideal solution” to have his office file the charges, since they are the alleged victim, but he said short-staffing due to the coronavirus pandemic required it. He said the case will ultimately be handled by another district attorney’s office.

Madalena McNeil, 28, one of the protesters who is facing a life sentence, said: “I was really shocked because I just don’t think any of the allegations against me warrant life in prison”. She was charged for buying paint and pushing an officer.

She told CBS that she feels confident that she will not receive such a long sentence, but “it would be silly to look at the potential of life in prison and not be scared”.

fa, leaves, paint, Protesters, Red
You may also like: