For nine days, 12 boys and their football coach were trapped in a flooded cave while a frantic search continued and their relatives staged an increasingly desperate vigil.

Richard Stanton, Robert Harper and John Volanthen made up the heroic British team who led the way in finding the young boys.

The Brit trio are global experts in exploring underground systems and were sent ‘because they are the best’ for the job. 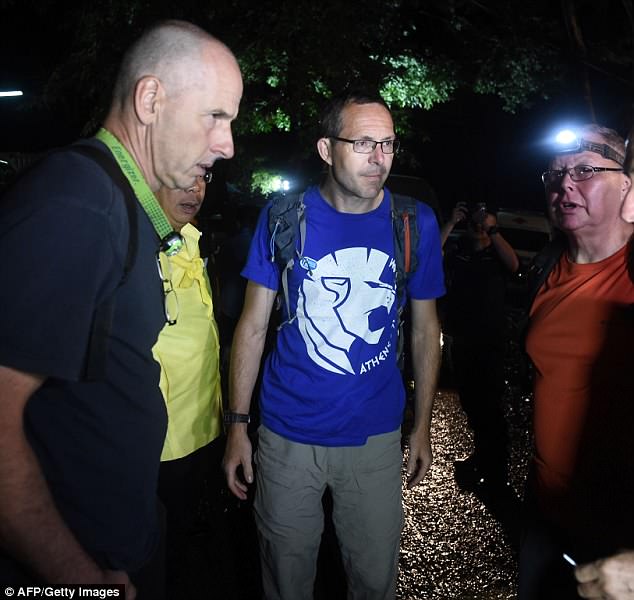 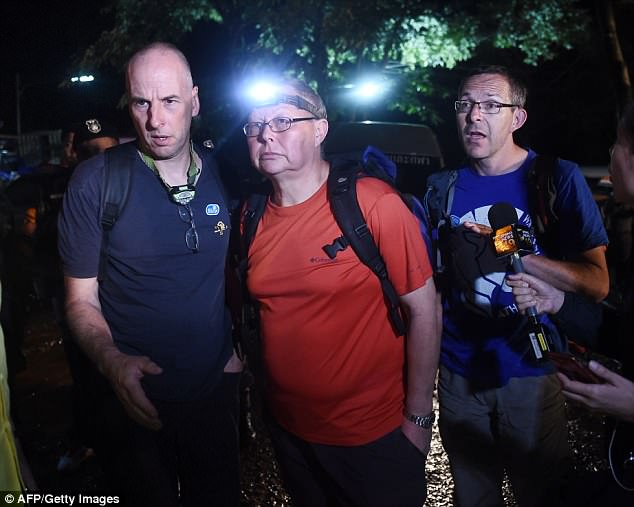 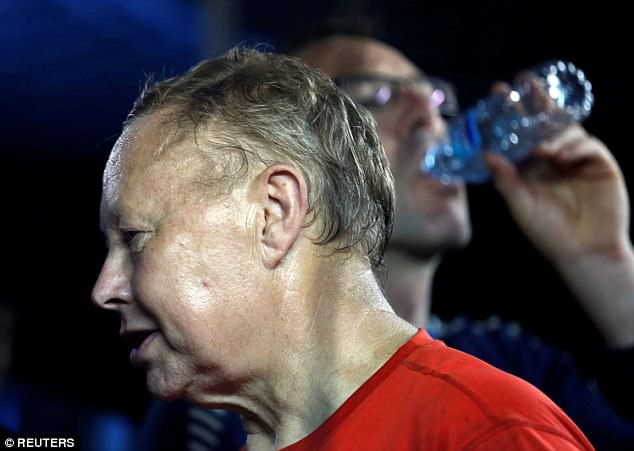 Pictured: Robert Harper gears up before making the 2.3km dive into the complex cave system

They were provided with equipment from Derbyshire Cave Rescue.

When they were dispatched British Cave Rescue Council vice chairman Bill Whitehouse said: ‘They are experienced and able.

‘They have been all over the world.’

Major Buncha Duriyapan, commander of the 37th Military District in Chiang Rai, said the three Brits got to work as soon as they landed. 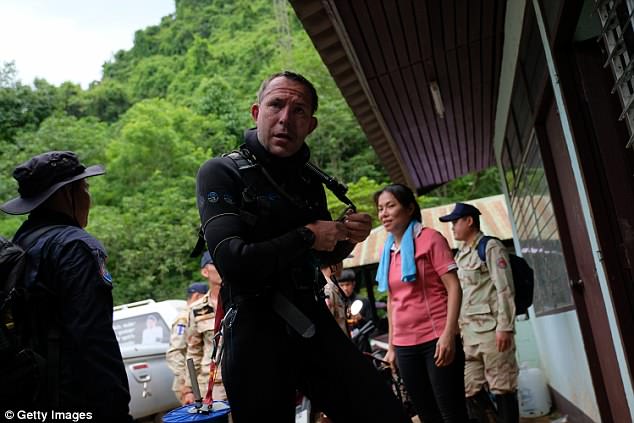 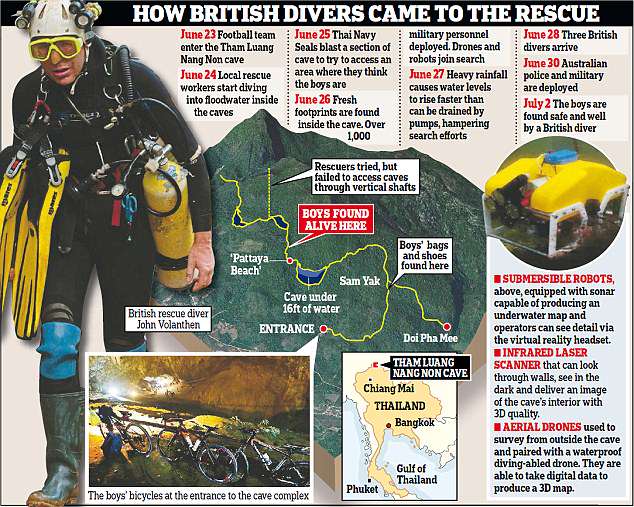 He said: ‘The expert divers went straight from the plane into the cave to make an assessment.’

When asked about the mission, one of the divers, John Volanthen simply told the BBC: ‘We’ve got a job to do.’

Last night Derbyshire Cave Rescue Organisation said: ‘The 13 missing people in a cave in Thailand have been found and are all OK. 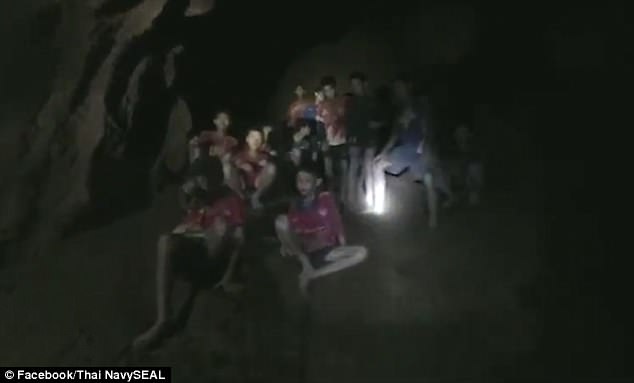 Alive: The frightened youngsters were huddled together when the rescue team discovered them trapped in the flooded cave 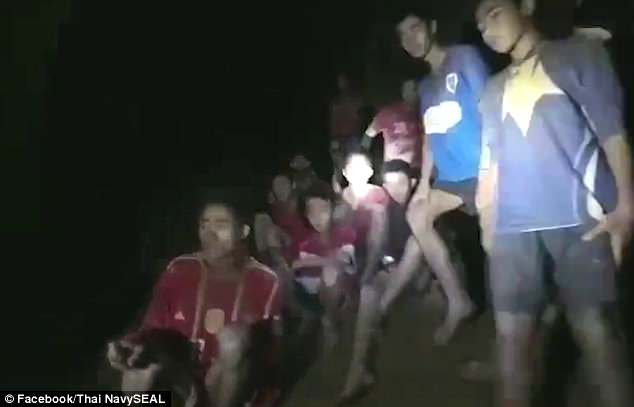 ‘We know there is still a lot of work involved for the evacuation, but for now we can take a moment to appreciate the huge international effort that has led to this point and say a huge congratulations to all involved.’

They later added: ‘Such fantastic news today that the 13 have been found, all well and all together. What a great team!

‘We have been receiving a lot ‘thank yous’ which we don’t think are really for us.

‘The British Cave Rescue Council organised the British cave divers to support the Thai operations – not us personally.

‘However we are members of the BCRC and as they do not have a facebook page so we will be sure to pass along all your thanks and good wishes!’ 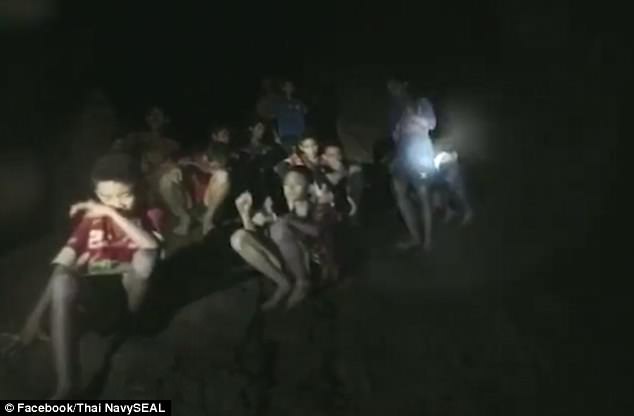 The pair broke the previous record, set in 2003, by 5.5 metres (18ft) thanks to a breathing system they developed for the attempt at Wookey Hole in Somerset.

In a previous interview Mr Volanthen, an IT consultant from Bristol, said he started caving as a scout.

He told the Sunday Times magazine: ‘I enjoy the logistical challenge.

‘Getting us and all our kit to the end of such a long cave… it’s like that puzzle with the fox, the chicken and the grain. 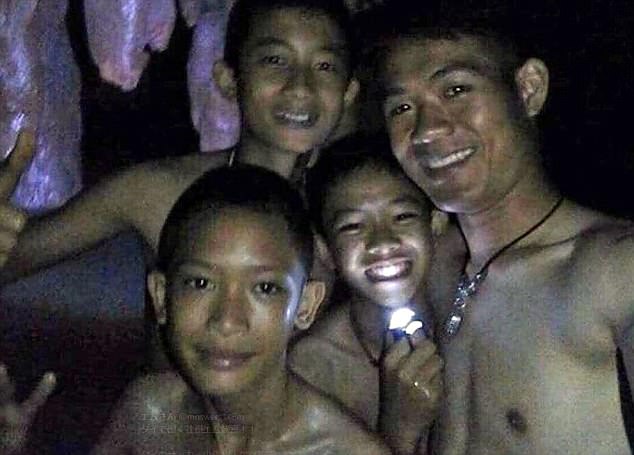 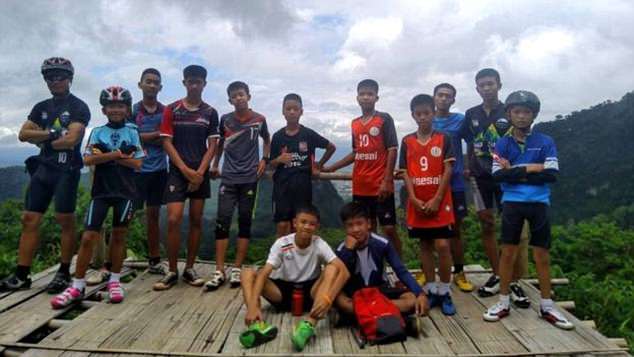 The boys, aged 11 to 16, are with their 25-year-old coach. They disappeared when flooding trapped them after entering the Tham Luang Nang Non cave on June 23

‘It’s not dangerous if you do it right. There are just a large number of little things that you have to be on top of at all times.’

It is thought Mr Volanthen and Mr Stanton are part of the South and Mid Wales Cave Rescue Team and they rescued a trapped diver in France in 2010.

Reports from 2010 described Mr Stanton as a firefighter from Coventry who was involved in the rescue of 13 British cavers in Mexico in 2004 .

The discovery brought elation as a complex rescue operation began to bring the boys, aged between 11 and 16, and their coach, 25, out from the winding, water-logged tunnels.

Photographs from the scene showed joyful relatives looking at a picture on an iPad taken by one of the divers. It showed four of the boys smiling. Family members of the missing wept with relief and hugged each other as they and the rescue team cheered the news.

Video footage shows Mr Volanthen asking the survivors: ‘How many of you?’ They reply ‘Thirteen!’ ‘Thirteen?’ says Mr Volanthen. ‘Brilliant.’ The group appear to ask when they will be taken to safety and one of the unseen rescuers replies: ‘Not today. There’s two of us. We have to dive. We are coming. OK? Many people are coming. We are the first.’

One of the boys is heard to say: ‘Eat, eat, eat, tell them we are hungry.’ The survivors then ask what day it is, to which one of the divers responds: ‘Monday, Monday. You have been here…ten days. You are very strong.’

The rescuers then explain they have to leave but will return. They tell the boys they are from ‘England. The UK.’ ‘Oh. See you tomorrow,’ comes the response.

British, cave, flooded, Football, Heroes, team, Thai, the, trapped
You may also like: