Backpacks (and beers) at the ready! Revellers descend on the Isle of Wight as festival season gets into full swing and Britain is to bask in 86F temperatures

Thousands of young revellers arrived to kick off the UK’s summer music season as the sun shone down on the Isle of Wight Festival.

Temperatures hit 86F (30C) as fans descended on boats and ferries to reach the island off the south coast, on Thursday.

Many lugged beers on their backs or pulled huge trollies across the grass, under a cloudless sky today, just one day after the summer solstice, the longest day of the year, was marked at Stonehenge in Wiltshire.

This year’s festival headliners are Kasabian, Depeche Mode, Liam Gallagher and The Killers.

Other acts performing over the weekend include The Script, Manic Street Preachers and Travis.

However, the festival’s 50th anniversary got off to a bad start in the sweltering heat as festival goers complained they were left sweltering in non-moving queues outside Seaclose Park in Newport.

Some said they had been left queuing for more than four hours in the hot sun, barely able to move and without any water being provided. 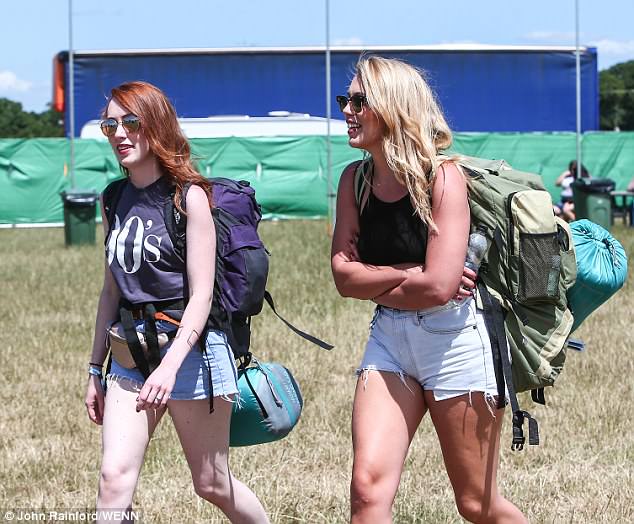 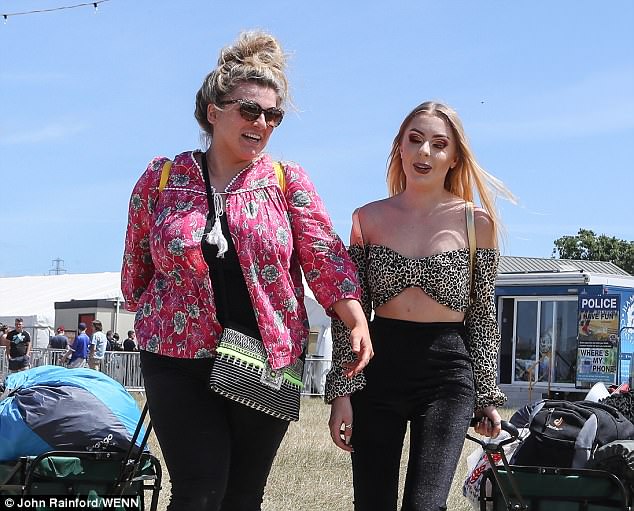 One reveller opted for a daring crop top, while her friend opted for a bright printed jacket 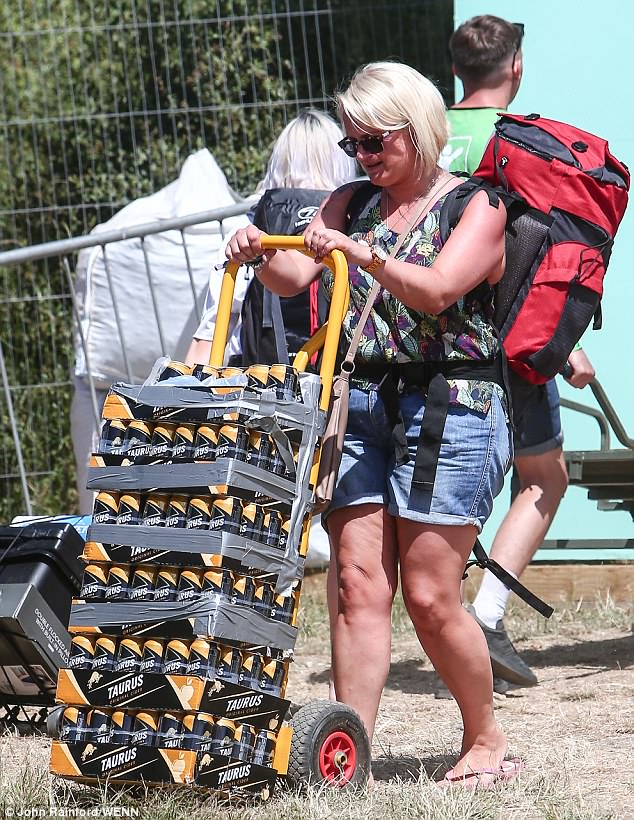 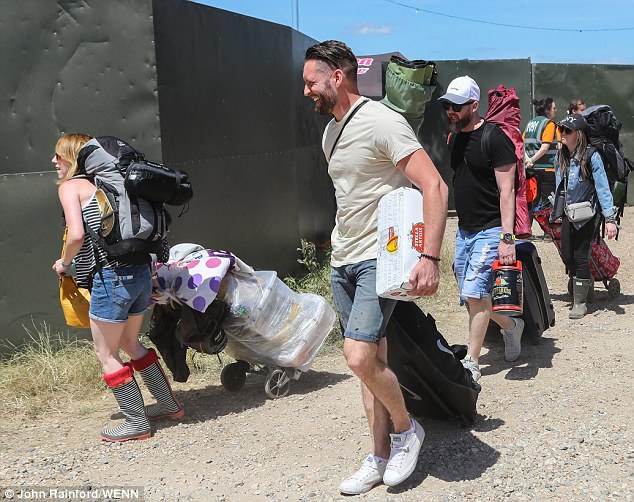 Frustrated Ben Clements said he had even seen people fainting, with just one sniffer dog being used to check people’s bags as they enter the festival grounds, today.

The 22-year-old, of Poole, Dorset, said: ‘It is a shambles, we have been queuing for four hours and have moved about ten yards. 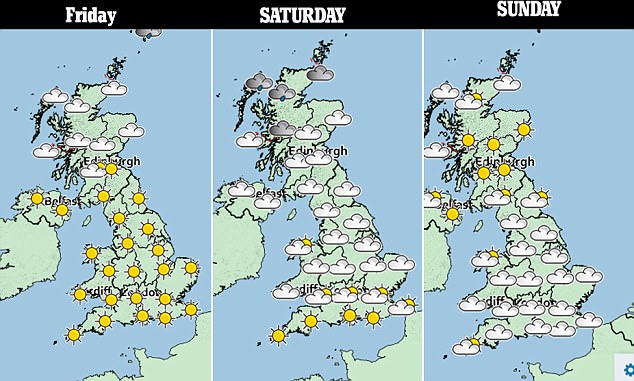 There will be a steady increase in temperatures over the coming days – with up to 86F alone expected this Sunday. Experts expect it will be even hotter into next week

‘There’s no water, no organisation. There are pregnant women in the queue, people fainting.

‘It took over an hour for an ambulance to arrive for one person.

‘The problem is, there is one sniffer dog checking every single bag, so you only have about 20 people getting through the gate at a time.

‘It’s only a matter of time before it kicks off. We have heard police have asked the organisers to hand out some water, but that was two hours ago.

‘We were told it would take 30 minutes, but nothing has happened. This is the worst organisation I have ever seen.’

The Isle of Wight Festival was first held in 1968 and is celebrating its 50th anniversary, with rockers Kasabian, Liam Gallagher, Depeche Mode and The Killers headlining the event.

The average temperature so far this month has been 14.7C (58.5F), which is nearly 2C above average. This makes June the warmest month on record since 1976, according to Met Office figures.

But Britain is predicted to bask in the sun from Sunday.

Emma Sillitoe from the Met Office said: ‘Heat will begin to come from the east which will see rising temperatures from this week.

‘Next week the heat will continue to climb with highs of 86F (30C) continuing until around June 30 in London and the south of England.’ 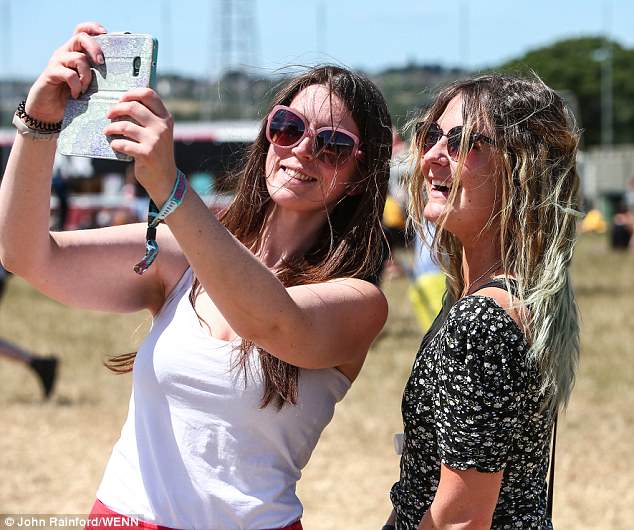 Festival organisers responded to the criticism on Twitter, saying: ‘Please bear with us, the glorious weather has brought a lot of you lovely people in early but we still need to follow security rules to keep you all safe.’

The Isle of Wight organisers posted on Twitter this afternoon: ‘Please bear with us, the glorious weather has brought a lot of you lovely people in early but we still need to follow security rules to keep you all safe.’

Organisers later added: ‘We sincerely apologise for the delays in entering the festival today, this is due to extra security measures on the gates.

‘We are doing everything we can and have opened a number of lanes to help get everyone in as quickly and safely as possible.’ 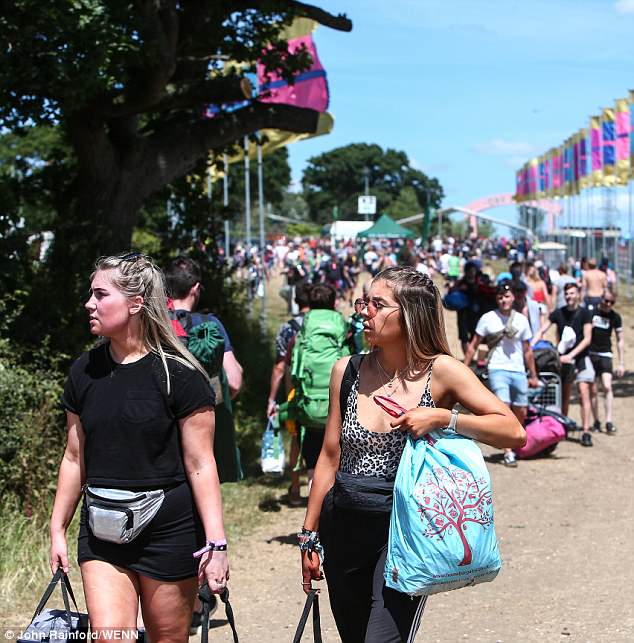 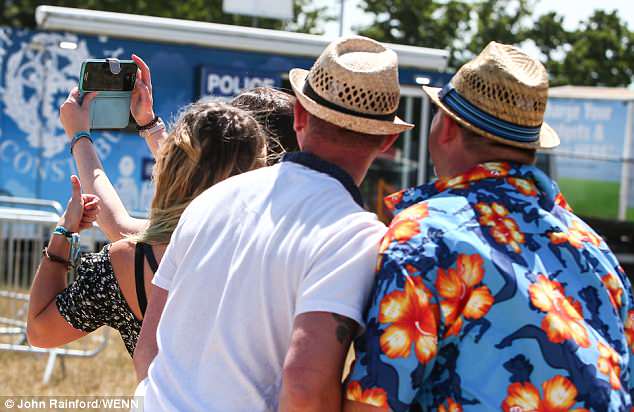 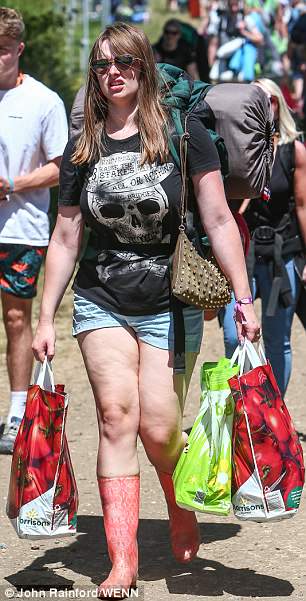 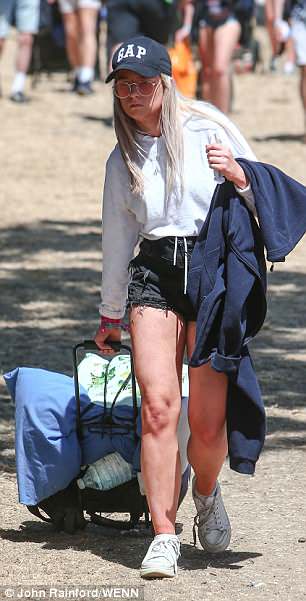 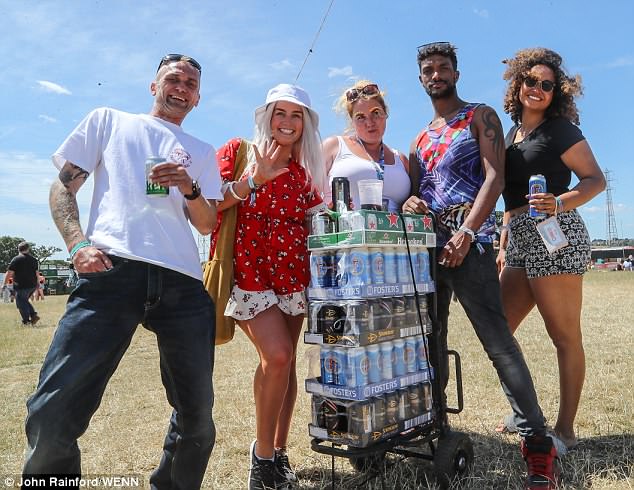 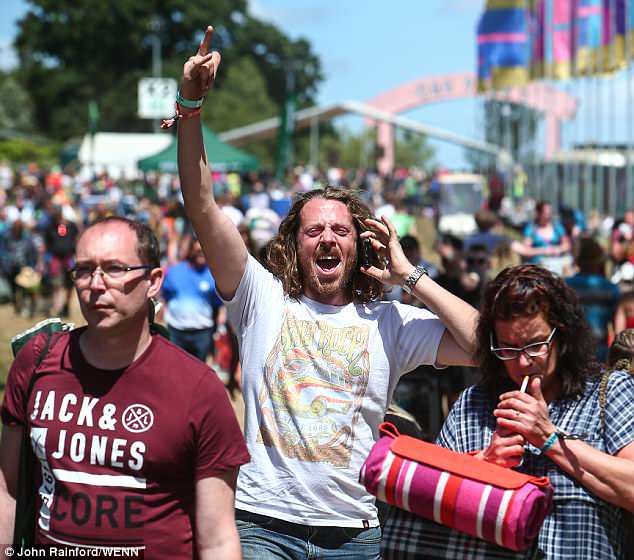 Despite the queues, many festival-goers looked to be in very high spirits as they arrived at the campsite.

This year is a special year for the festival which is celebrating 50 years since it was first founded.

The music event was first set up by the Foulk brothers in 1968, with Bob Dylan famously playing at the festival following year.

The original festival continued until 1970, when acts including Jimi Hendrix, Miles Davis, and the Who took to the stage. 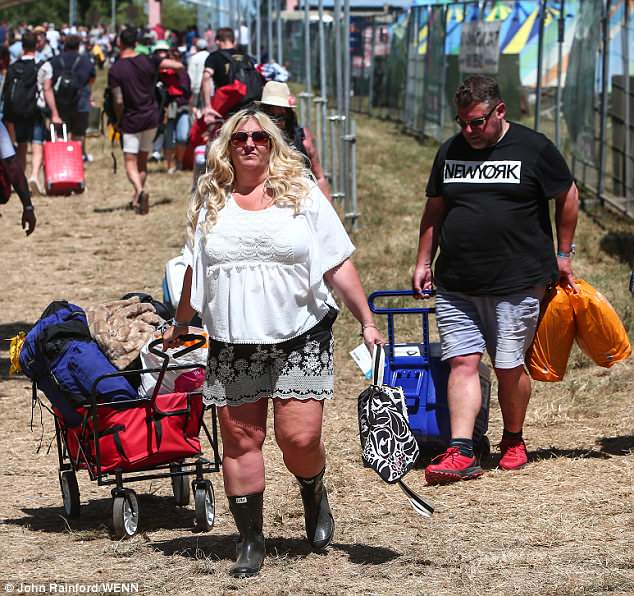 Experienced festival-goers ensured that they were prepared for any weather, donning their wellies on the campsite 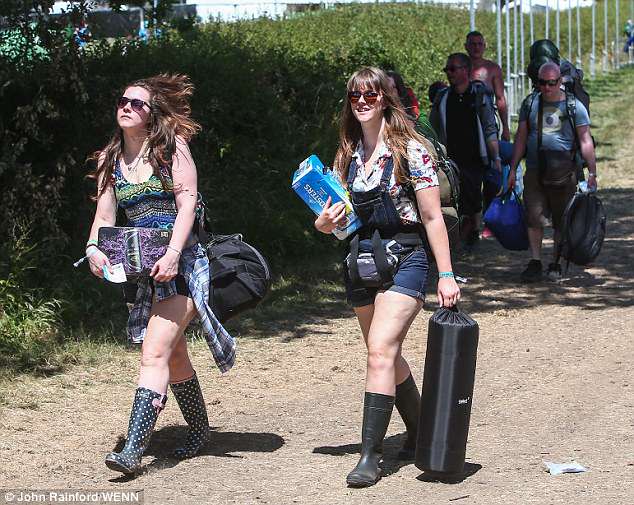 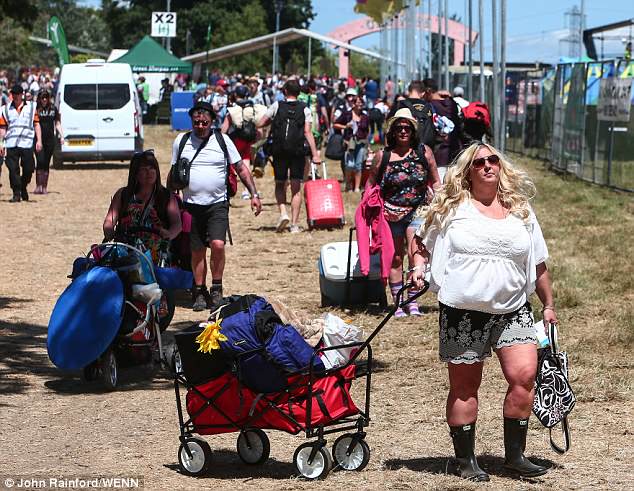 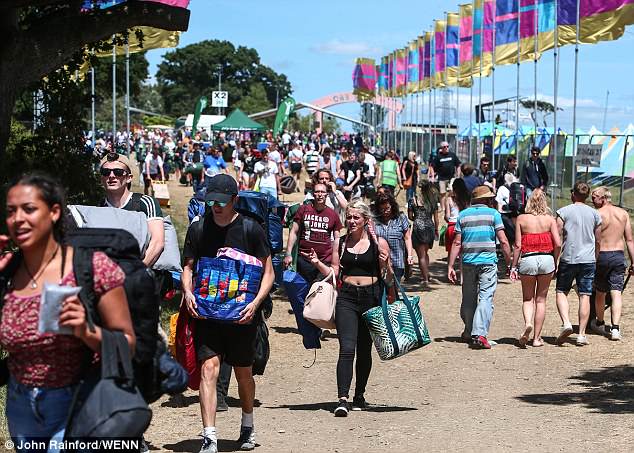 However, the music event was forced to stop after the local council passed a law banning any open air festival of more than 5,000 without a special license.

The modern Isle of Wight Festival was revived in 2002 by John Giddings, and has taken place annually since then. 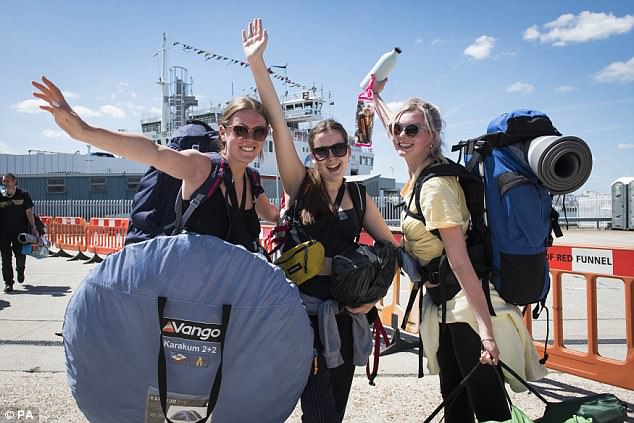 Happy campers! Women lugged their tents of their backs as they headed to the boat to the Isle of Wight 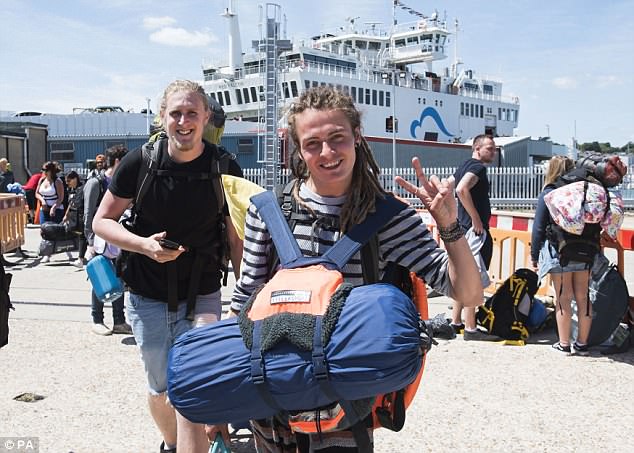 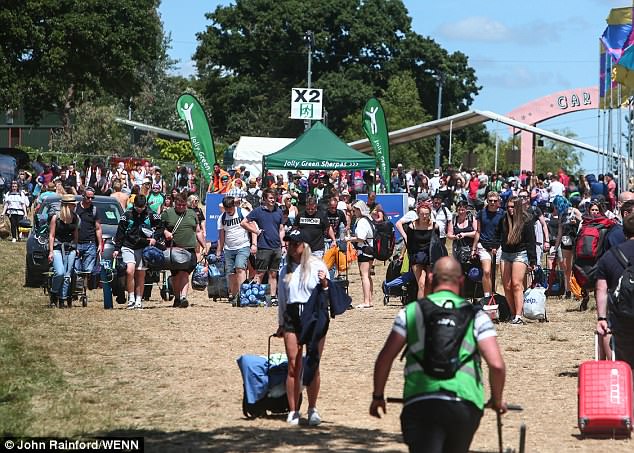 Queue chaos upset some festival goers as they were waiting for hours in the heat, while carrying all of their belongings 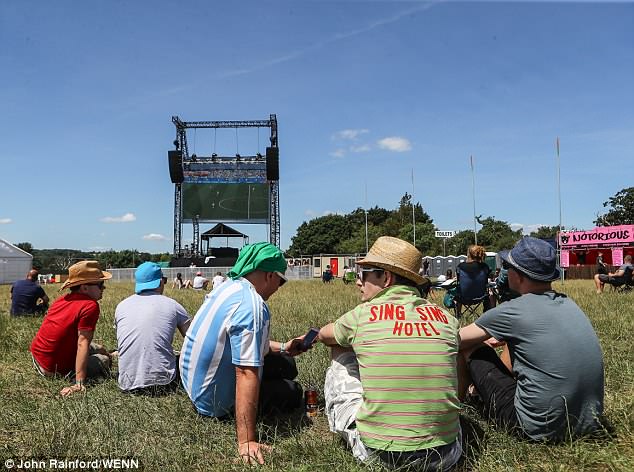 Colourful tents could be spotted, set up for those who were not so keen to bring their own equipment