Armed militia groups control more than half the territory of Rio de Janeiro, installing a reign of terror in poor neighbourhoods that are home to nearly 2.2 million people, according to a study published on Monday.

The Brazilian Public Security Forum’s latest study found that the groups have largely overpowered drug gangs as the main criminal organisations in the 41 neighbourhoods, home to 33 percent of the megacity’s population. 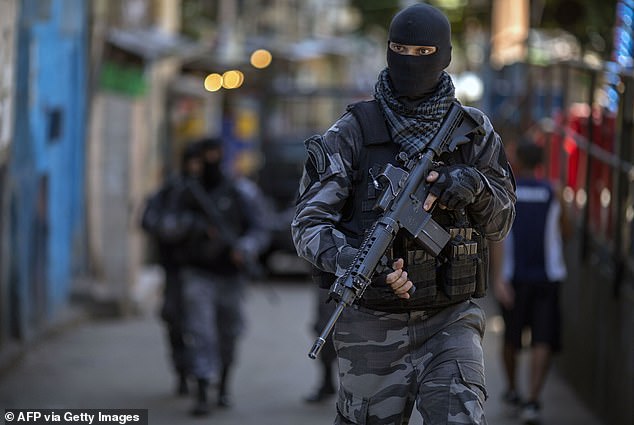 Members of the Brazilian Military Police special unit Choque patrol during an operation in the Rochina favela in March 2018. Many favelas are now controlled by armed militia groups who have wrested power from drugs gangs only to set up their own criminal enterprises 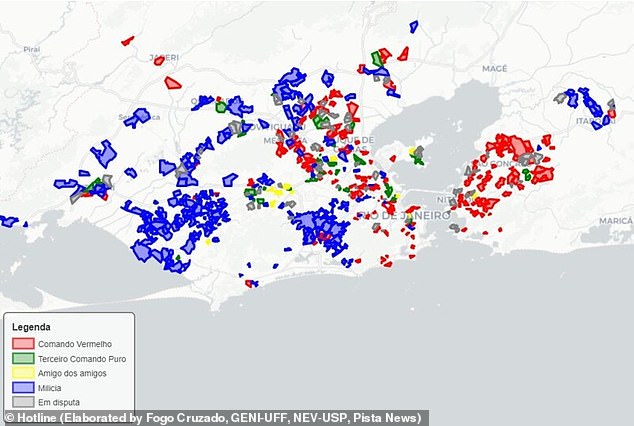 A new study has revealed that militia groups (represented on the map in blue) now control more land in Rio de Janeiro than the three most powerful drug gangs combined (gangs are marked in red, green and yellow). Pictured: A man produced by a consortium of armed groups shows each’s territory

A map produced by the consortium of armed groups shows Rio – known for its picturesque beaches but also its violent crime – covered in blue dots representing militias across the west side of the city, where the groups originated.

They are also present, with less density, on the city’s north side, where drug gangs have traditionally held sway.

The map shows that militias now control more territory than all of the other factions combined.

‘The expansion of militia forces in Rio de Janeiro is striking given that they only began to organise in their current form in the 2000s,’ the study said.

By contrast, the city’s biggest drug gangs, from which the militias often seize power, formed between the 1970s and 1990s, it said.

They initially formed as neighbourhood watch groups to protect residents from drug gangs.

But they soon evolved into organised crime groups themselves, controlling sectors including internet service, cable TV, transportation and most recently construction.

The militias harken back to the death squads of Brazil’s 1964-1985 military dictatorship who carried out extrajudicial killings and enforced disappearances to repress dissent and maintain the regime’s power.

Modern militias largely operate with impunity as they enjoy close ties to the police force – some even include currently serving members – and reportedly even to the family of Brazilian President Jair Bolsonaro.

In the aftermath of the 2018 assassination of Rio City Council Councillor Marielle Franco, the president and his three sons, who are also involved in politics, were revealed to have what The Intercept described as ‘extensive, direct, multilayered and deeply personal’ ties to the militias.

Armed, groups, have, ov, rio
You may also like: