A collection of incredible photos showing the lives of sailors and marines at sea and on land have been released after they were picked as winners for this year’s Royal Navy photo competition.

The pictures, which normally go unseen by the public, have all been recognised in the annual Peregrine Trophy Awards.

Each photographer is a Royal Navy sailor or marine that has worked in a particular branch of the Forces before being accepted into the photographic role and their work involves following warships and commandos to capture behind-the-scenes images and videos or operations, training and equipment.

Leading Photographer Kyle Heller, who was part of HMS Queen Elizabeth, was named the Royal Navy’s photographer of the year for his portfolio after the vessel’s deployment to America’s east coast which saw the first British F-35B Lightning jets land on the aircraft carrier.

Speaking after receiving his award, Kyle said: ‘This is a job like no other – it sounds clichéd, but it’s true. I’m still trying to get my head round winning the award, in all honesty. I’m not one for the plaudits at all and for me it’s about the opportunities, experience and variation that you get with this job. There really is nothing like it.

‘Life is never dull and you’re there as part of history in those big moments. Seeing the Lightning jets land for the first time is that part of history you’re there for and won’t forget. I’ve seen so much around the world as a photographer and I’m very thankful for those opportunities. This is a proud moment for me.’

Kyle joined the Royal Navy in 1998 aged 17 and served on HMS Beaver, Sheffield and Cornwall before becoming a Royal Navy photographer in 2009 after which he covered operations in Antarctica, the South Atlantic, South America and the Caribbean and is now based at Royal Naval Air Station Culdrose in Cornwall.

The Peregrine Trophy dates back to 1961 and is named after the HMS Peregrine Royal Naval Air Station in Sussex and this year’s competiton was judged by Richard Pohle of The Times, Steve Parsons of the Press Association, Jane Sherwood of Getty Images, Lee Durrant of the BBC, Jack Ashdown of Great State and director of photography and cinematography Vince Knight.

More than 250 pictures and videos were submitted to the competition this year and although there will be no formal awards ceremony this year, the winning images will be put on display at the National memorial Arboretum in Staffordshire between December and March. 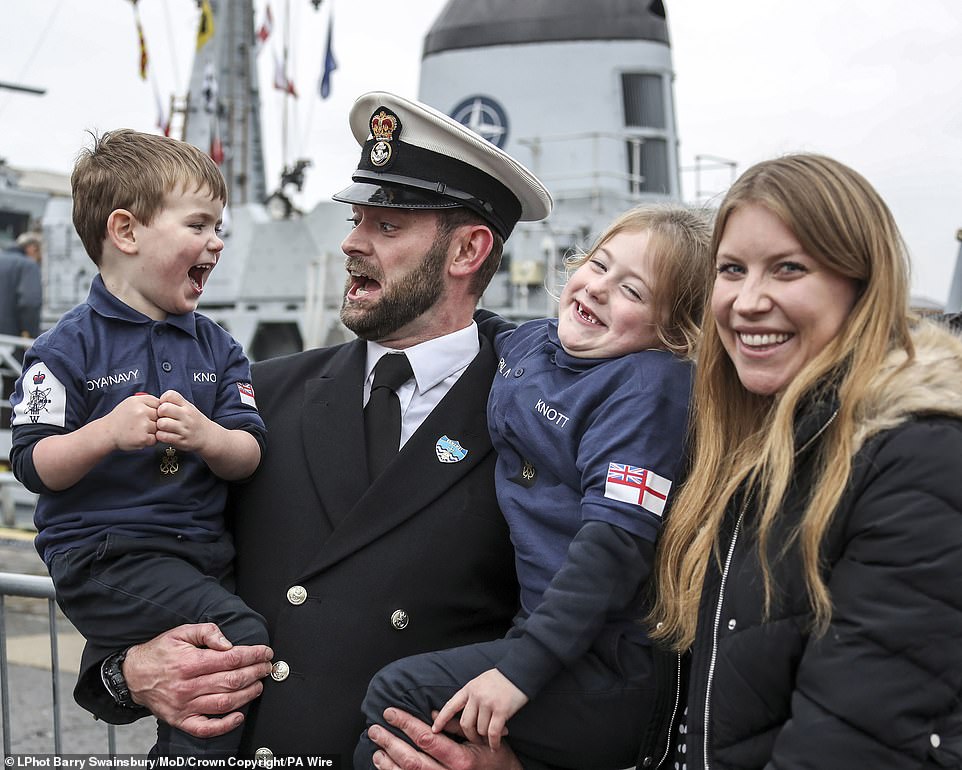 Winner of the Royal Navy Royal Marines Charity Family and Friends Award: This cheerful picture taken by Leading Photographer Barry Swainsbury shows a member of HMS Cattistock’s crew returning home and joking around with his family after being reunited with them after having spent 10 months away on a NATO employment 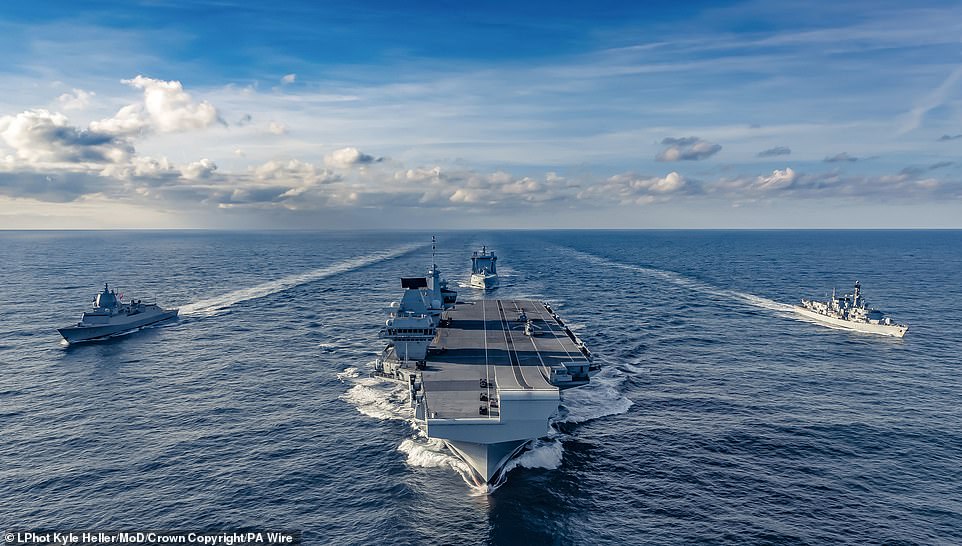 This photo was part of the winning selection for the Photographer of the Year which was awarded to Leading Photographer Kyle Heller. The image shows the Norwegian anti-submarine frigate HNoMS Thor Heyerdahl alongside the UK’s Carrier Strike Group as they travel east across the Atlantic Ocean following deployment in the United States 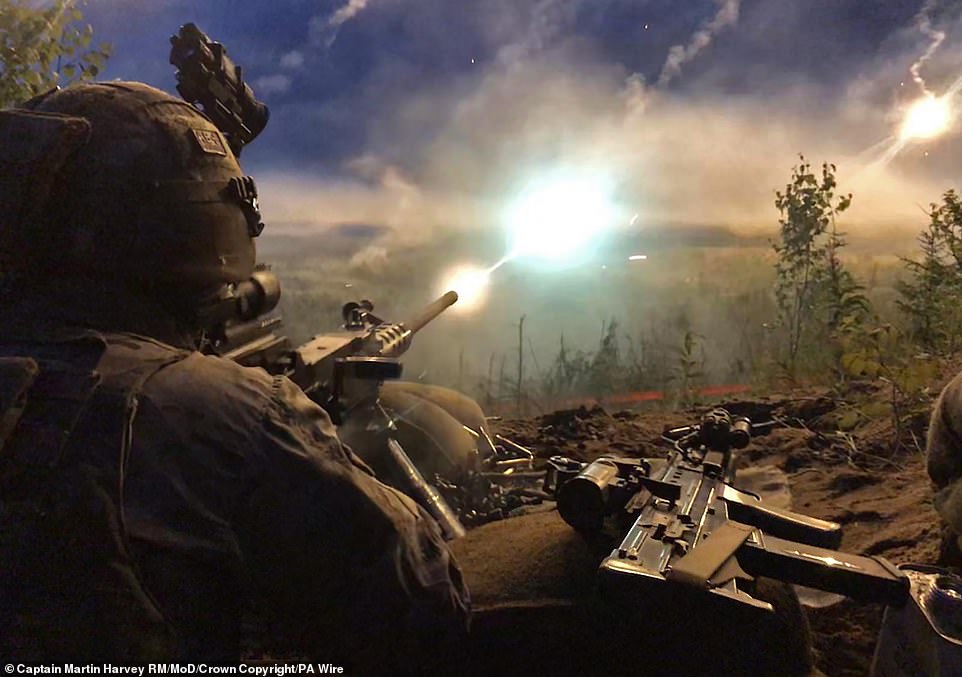 A Royal Marine of 45 Commando fires a .50 calibre heavy machine gun in Estonia in 2019 during the Exercise Baltic Protector which was part of the Joint Expeditionary Force (JEF) in Tapa. This picture won the award for Royal Navy Amateur Open Category in the Peregrine Trophy Awards and was taken by Captain Martin Harvey HM 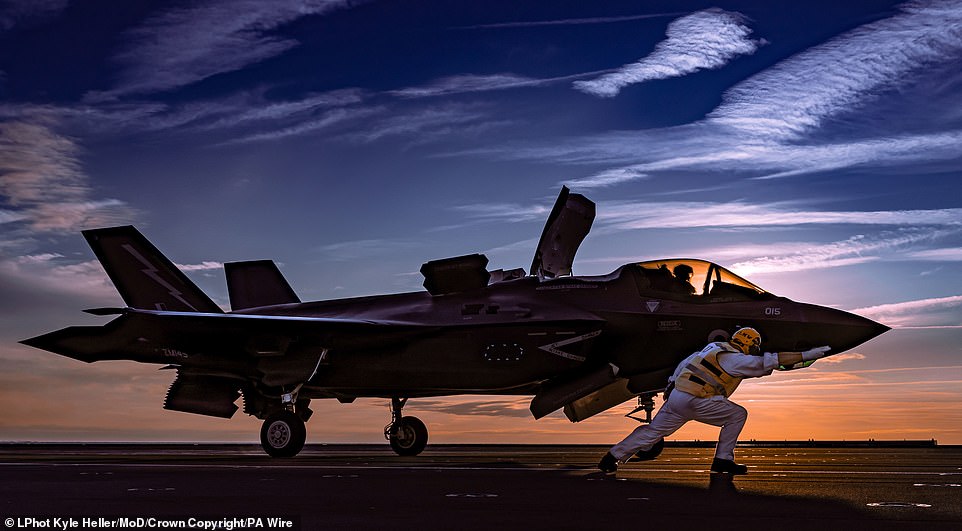 An F-35B Lightning jet sits on HMS Queen Elizabeth’s flight deck during her Westiant 19 deployment to the east coast of the United States. This was another photograph in the collection submitted by Leading Photographer Kyle Heller who won the Photographer of the Year award at this year’s Peregrine Trophy Awards 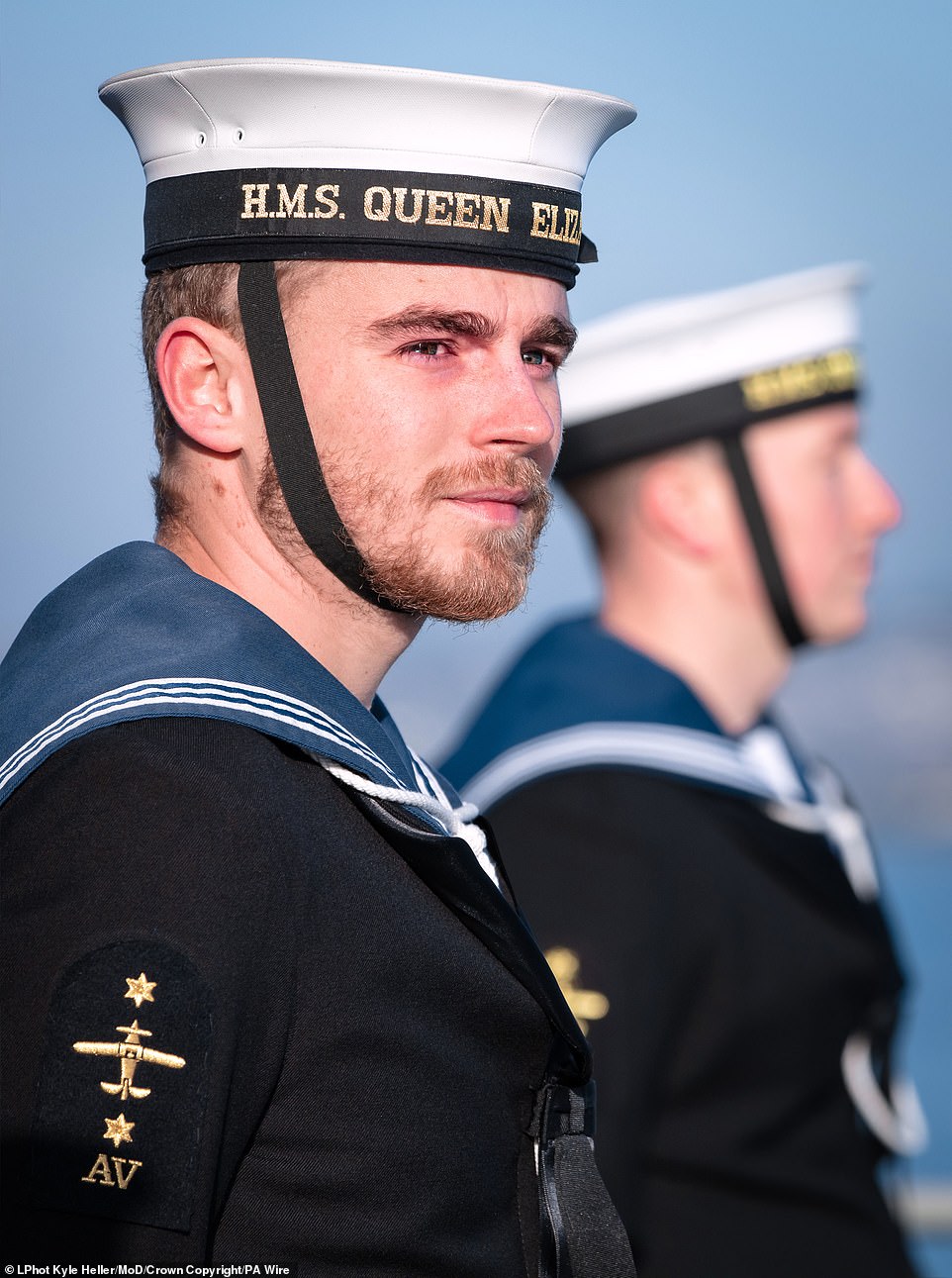 Searching in the crowd: LAET Phillip Hulbert searches for members of his family after the HMS Queen Elizabeth returned to Portsmouth after completing its deployment to the United States’ east coast. The image was captured by Photographer of the Year winner Kyle Heller and formed part of his portfolio that earned him the award 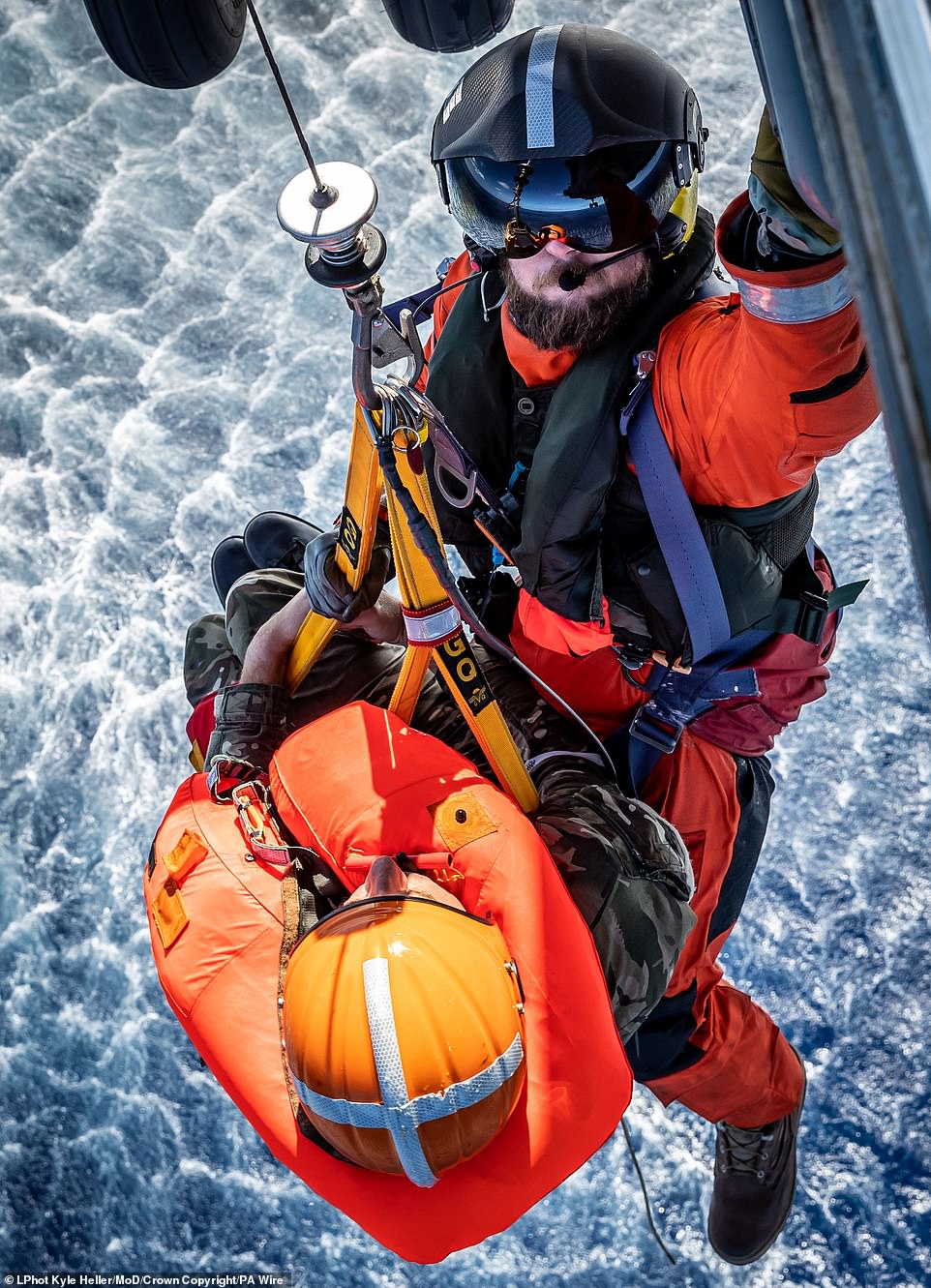 Search and rescue: Members of the 5845 Naval Air Squadron conducts a search and rescue operation to retrieve an isolated pilot who had become stranded at sea. The operation formed part of a training exercise in how to collect personnel and transport them onto the HMS Queen Elizabeth. Kyle Heller included this photograph in his winning portfolio at the Peregrine Trophy Awards 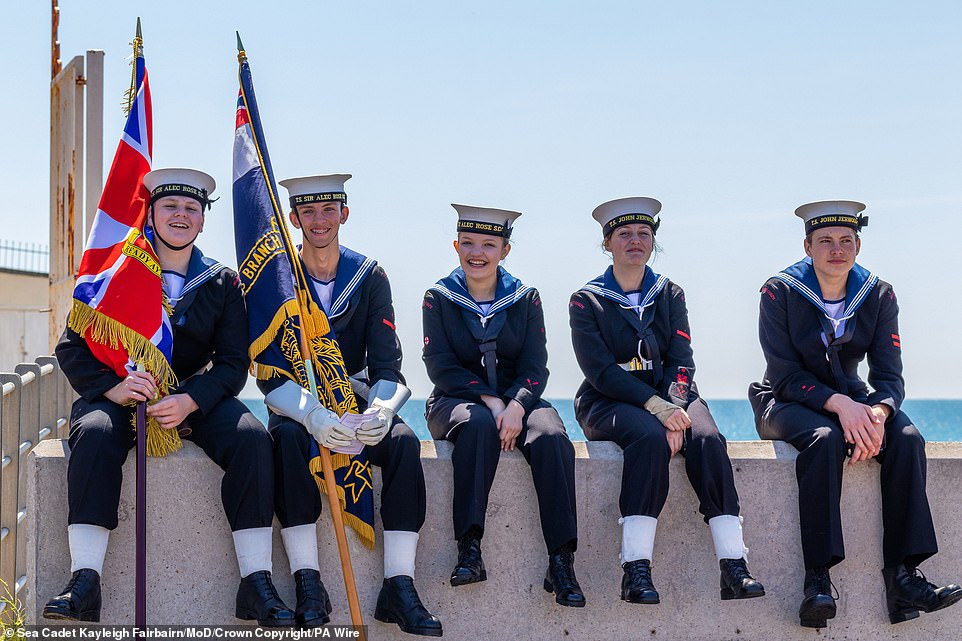 All smiles: A group of Sea Cadets in uniform sit on a wall as two in the group balance flagpoles under one arm. This photograph, taken by Sea Cadet Kayleigh Fairbairn won the Sea Cadet Category at the Peregrine Trophy awards 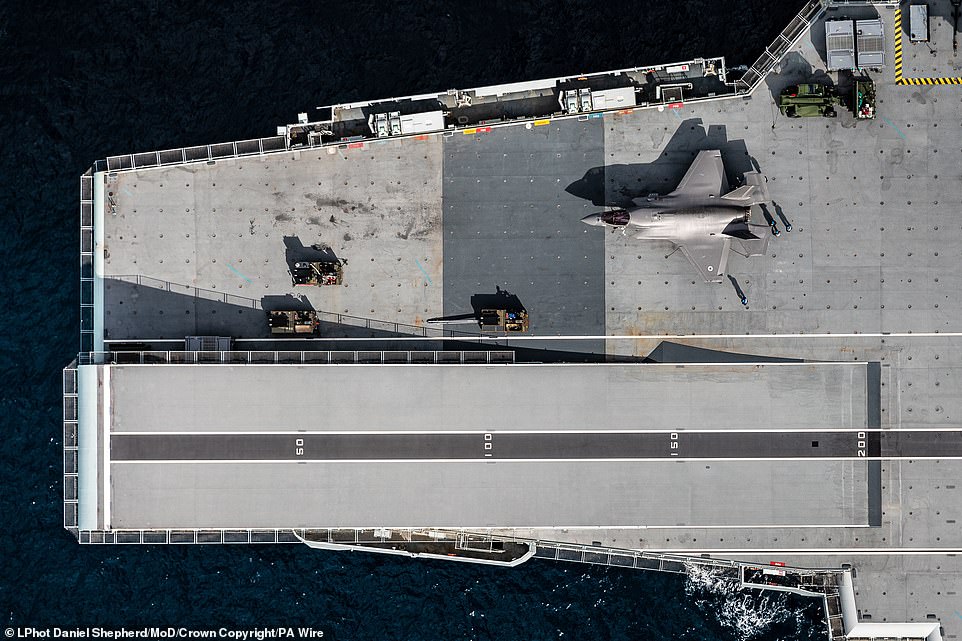 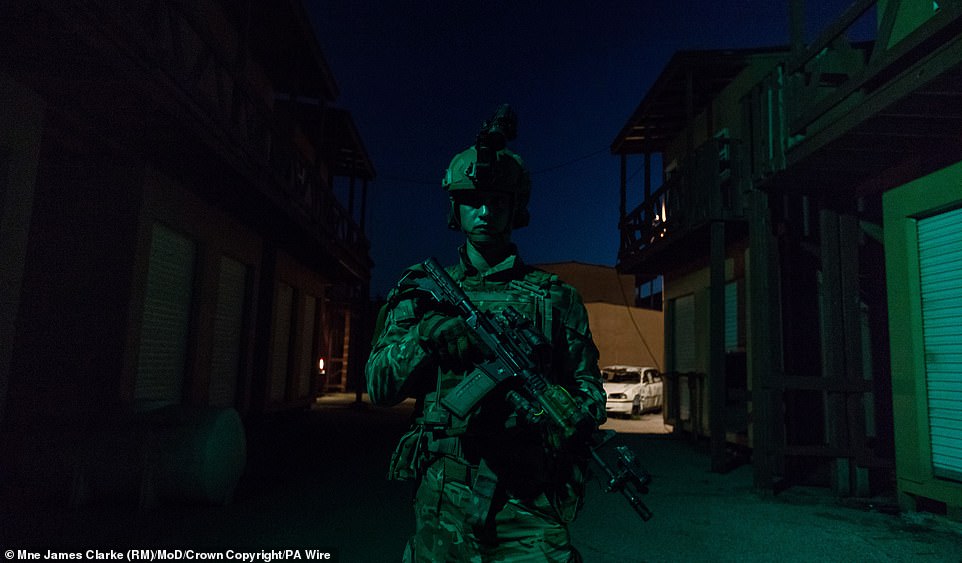 Amateur Photographer of the Year: A Royal Marine from 40 Commando poses for a photograph in Indiana while on a military training exercise. The Royal Marines were practising Dense Urban Operations with their USMC counterparts and this image formed part of Marine James Clarke’s winning selection 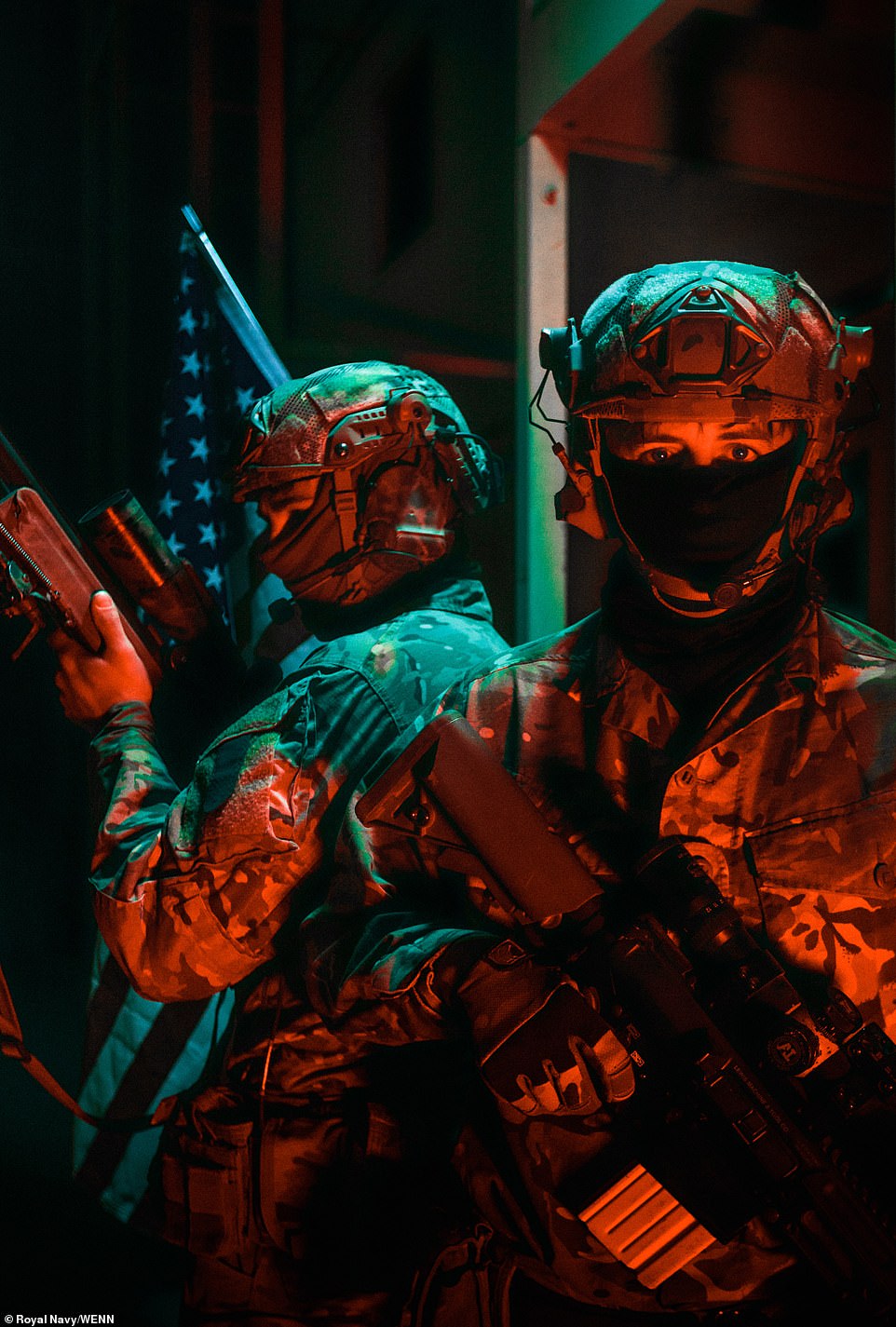 Two Royal Marines from 40 Commando Recce troops stand under a red light, wearing their uniforms and equipment. Marine James Clarke captured the shot while the soldiers were on a training exercise in California to practise Urban Operations where they acted as the enemies for USMC forces 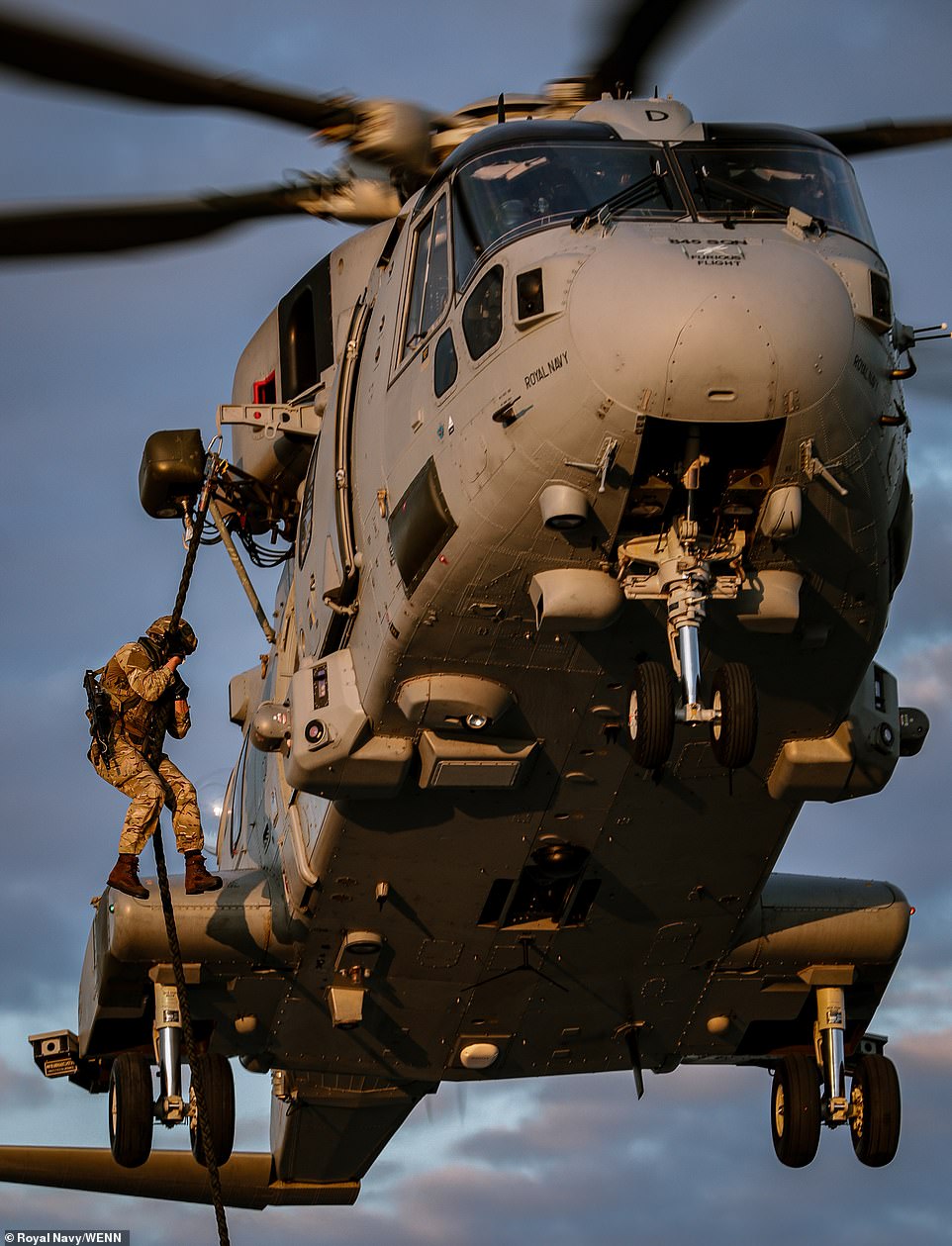 Royal Marines load up onto a Merlin helicopter on the flight deck of HMS Queen Elizabeth. The picture was taken during a fast roping exercise by Leading Photographer Dan Shepherd and formed part of the winning selection for the Commandant General Royal Marines Prize at the Peregrine Trophy Awards 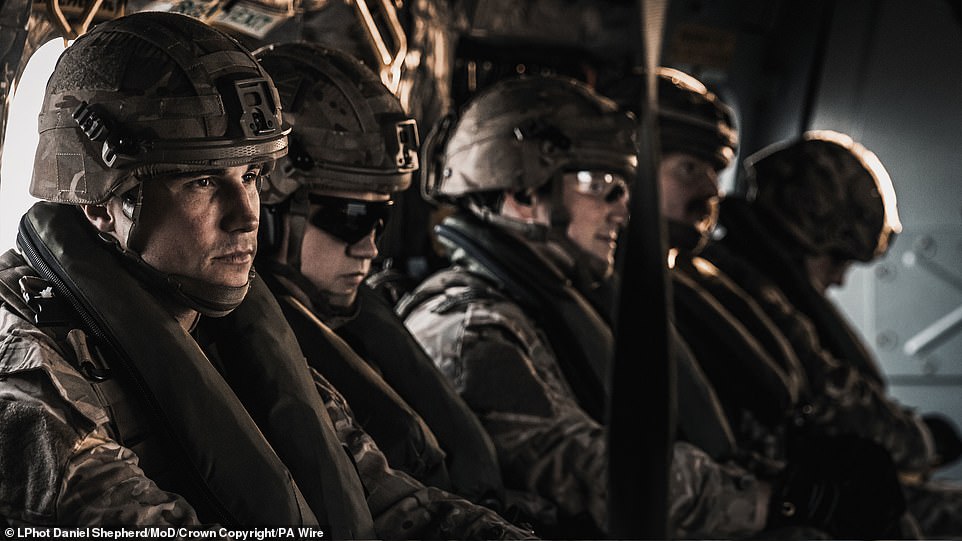 Ready and waiting: Royal Marines are pictured sitting in a row on a Merlin helicopter during a fast roping exercise on the flight deck of HMS Queen Elizabeth. Dan Shepherd submitted this picture as part of his winning selection for the Commandant General Royal Marines Prize 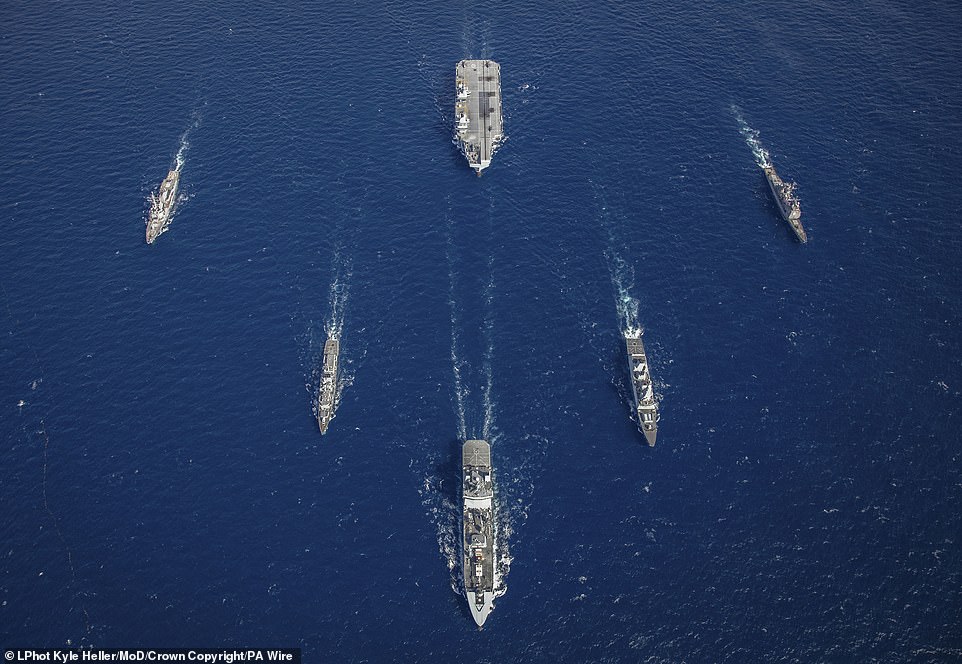 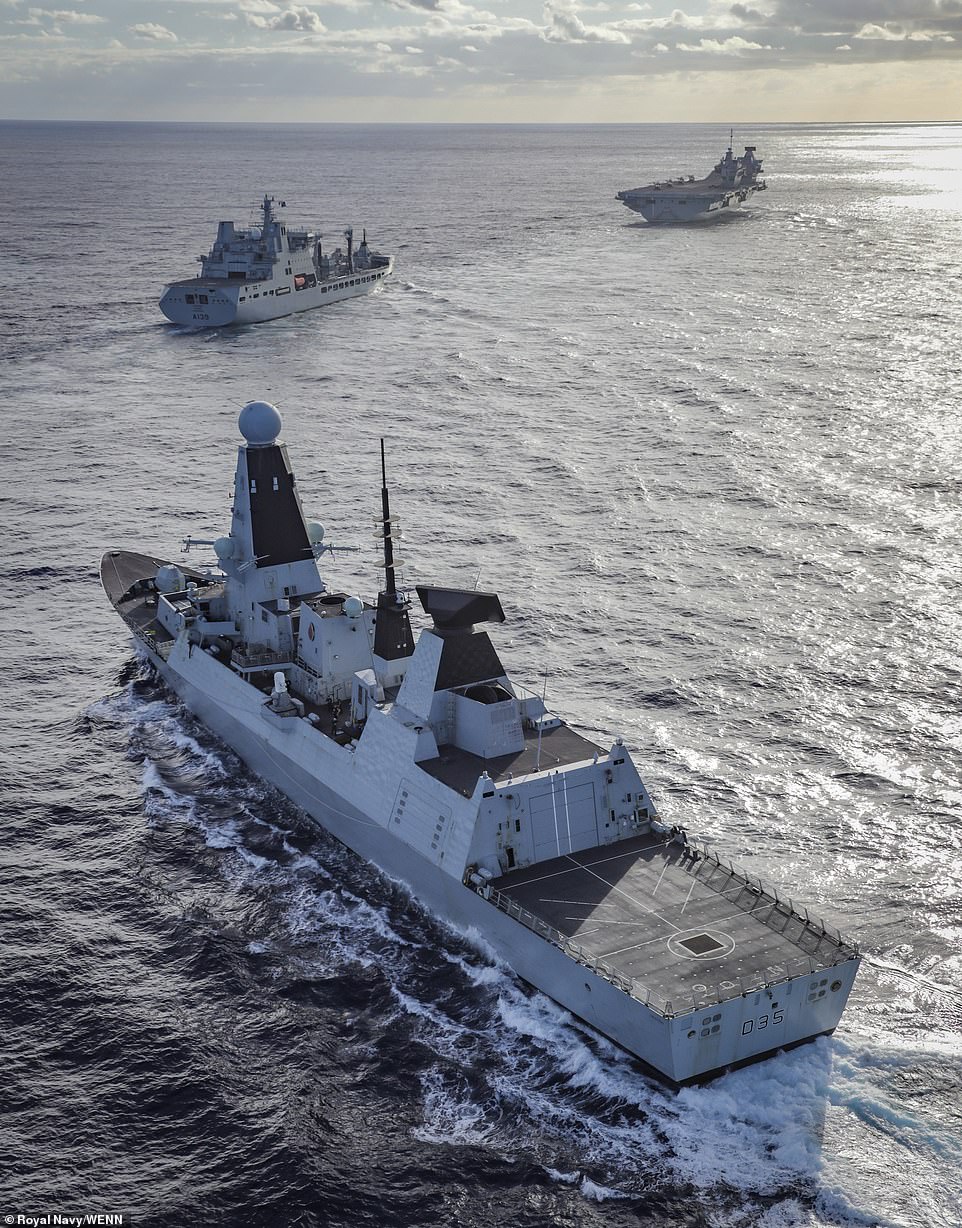 The warships of the UK’s carrier strike team assemble. HMS Dragon, RFA Tideforce and HMS Queen Elizabeth sail together in a. This stunning photograph won the People’s Choice Award at the Peregrine Trophy Awards and was taken by Leading Photographer Kyle Heller 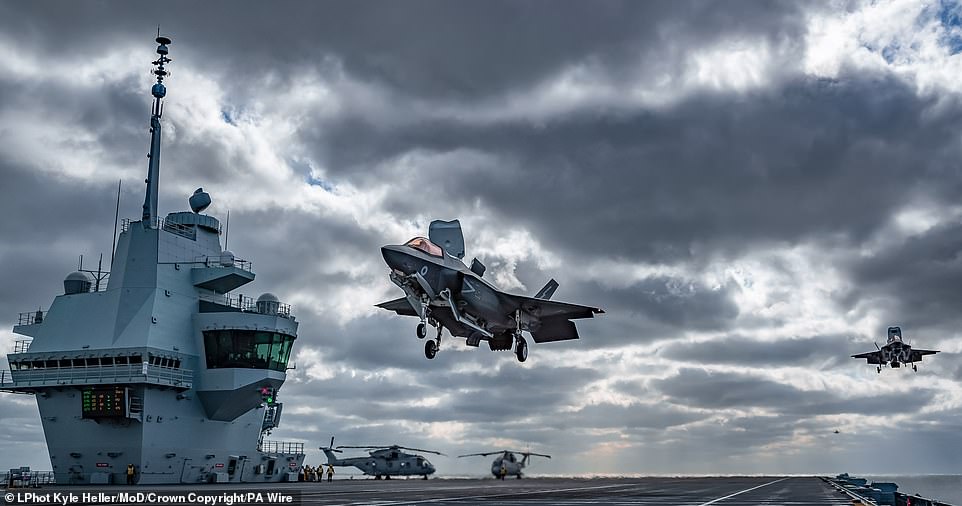 Clear for take off: An F-35B Lightning jet is seen in mid-air above the flight deck of HMS Queen Elizabeth during operational testing. Kyle Heller took the striking photograph which offers a view of the entire length of the flight deck as well as the sight of two helicopters sat further down the strip 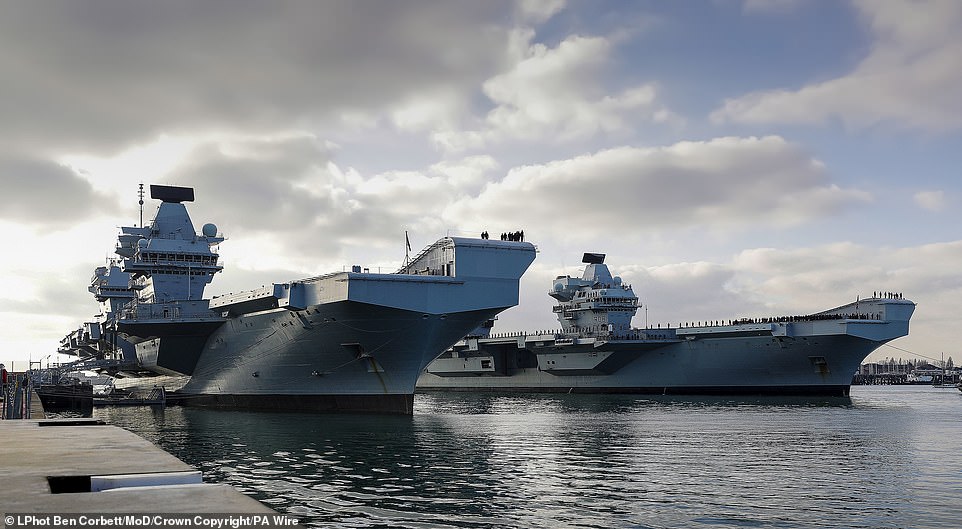 Home again: The UK’s aircraft carriers HMS Queen Elizabeth and HMS Prince of Wales are pictured stationed in Portsmouth together for the very first time. This striking image collected the Best Maritime Imagery award at the Peregrine Trophy Awards and was taken by Leading Photographer Ben Corbett 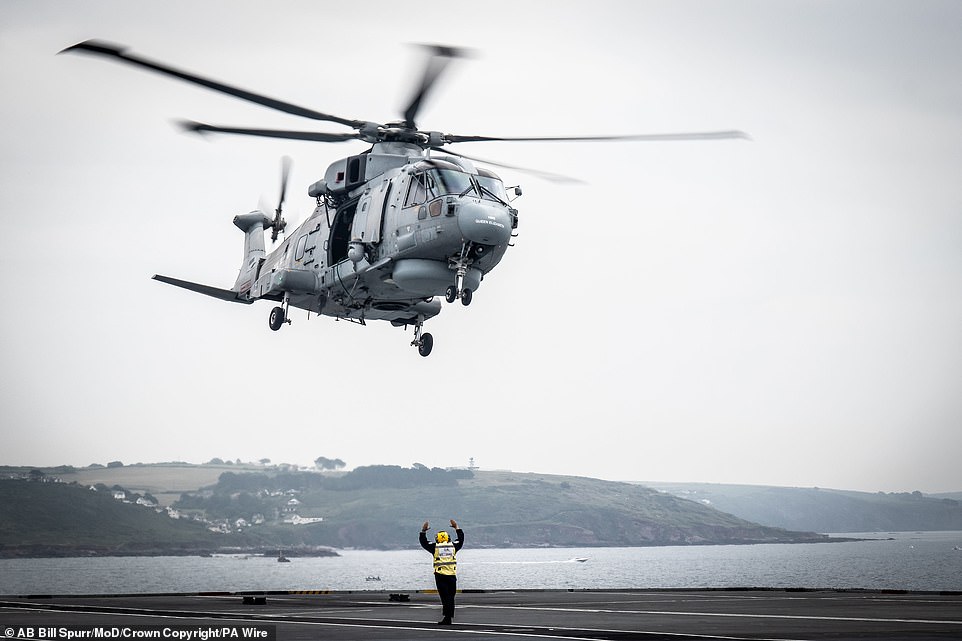 A crew member on the HMS Queen Elizabeth signals to a landing Merlin helicopter which was conducting training on the flight deck of the aircraft carrier. The impressive picture was taken by AB Bill Spurr who scooped the Royal Navy Amateur Maritime Image Award at the Peregrine Trophy Awards 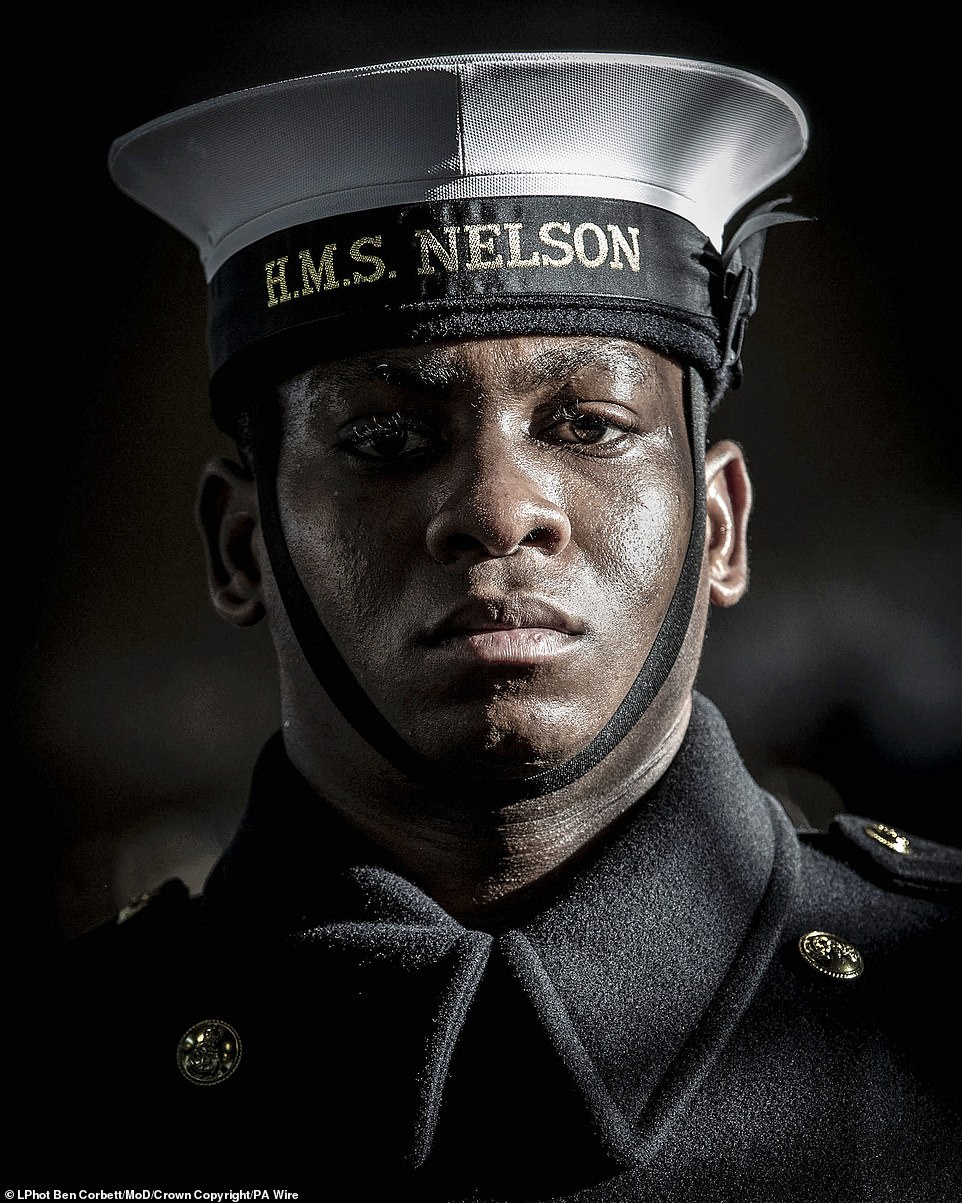 The Spirit of Diversity Prize winner: This striking photograph of AB WTR William Augustine was taken during Ceremonial Parade Training onboard the HMS Excellent. Taken by Ben Corbett, AB WTR Augustine is seen standing to attention while dressed in full uniform 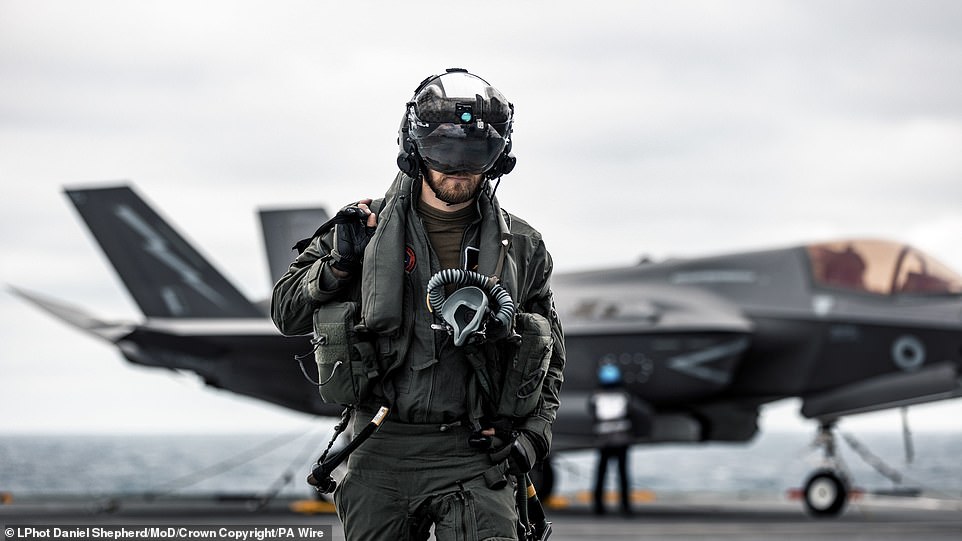 One for the collection: This photograph by Leading Photographer Dan Shepherd shows a 2A British F35B Lightning jet pilot as he walks across the flight deck of HMS Queen Elizabeth. Dressed in full flight gear with one of the lightning jets in the background, the pilot cuts a cool character 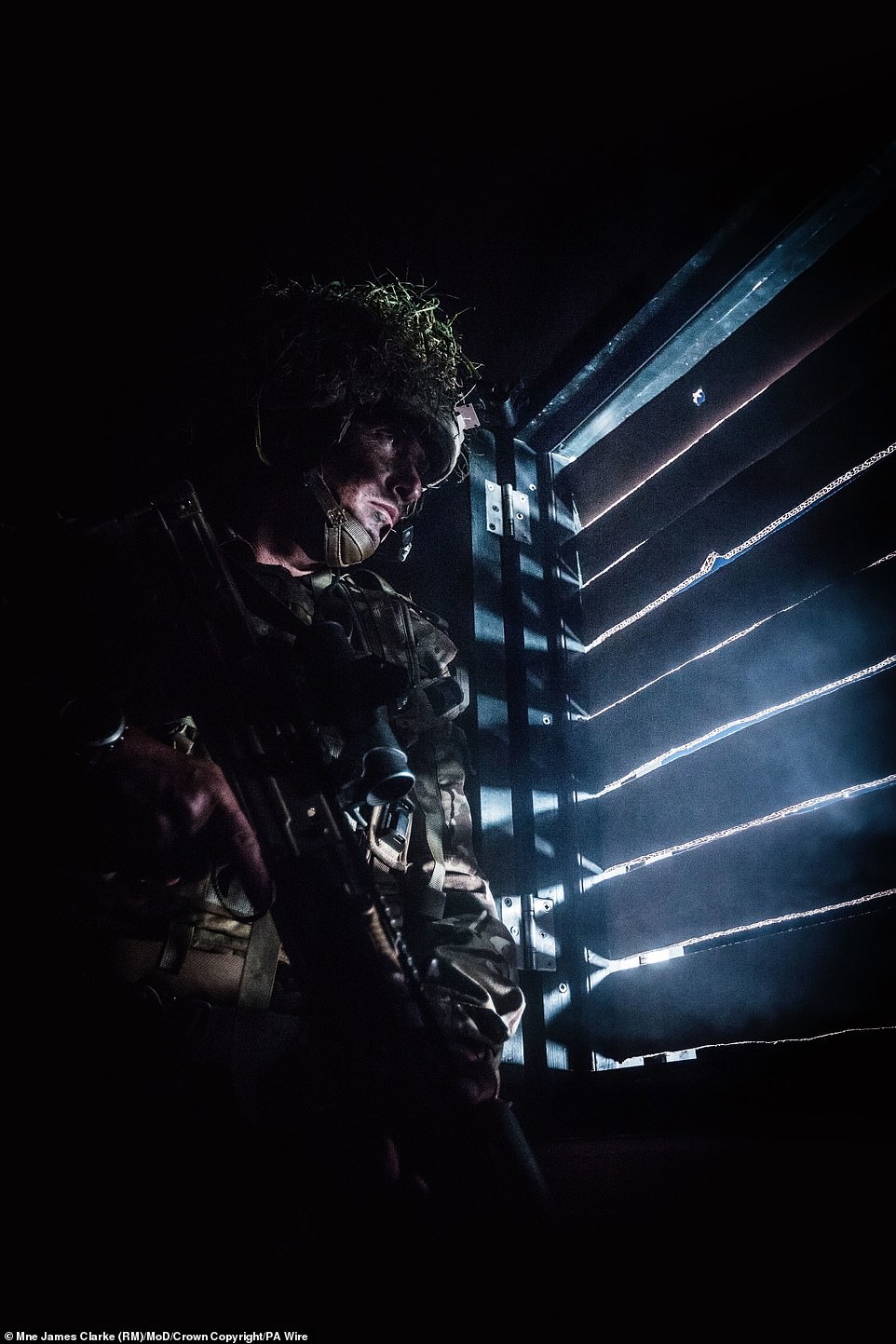 Eyes on: A Royal Marine dressed in full gear with camouflage on his face stares out of a partially closed blind at an enemy position in this incredible photo by Marine James Clarke. The picture was taken during an urban training exercise in the UK and helped Clarke scoop the Amateur Photographer of the Year award 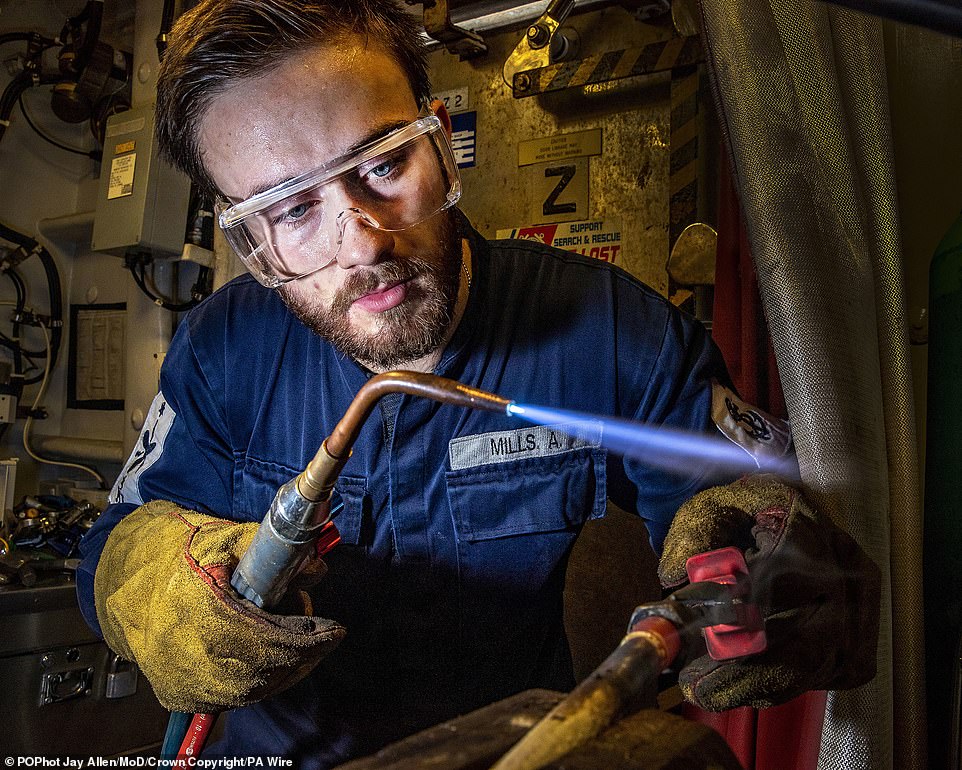 Petty Officer Photographer Jay Allen has captured the intense focus needed in every single role in the Royal Navy. His photograph, which won the Engineering Prize at the Peregrine Trophy Awards, shows Leading Engineering Technician (Marine Engineering) Mills as he carries out maintenance work on a fresh water pipe in the ‘Chippes Shack’ on the Type 45 destroyer HMS Duncan 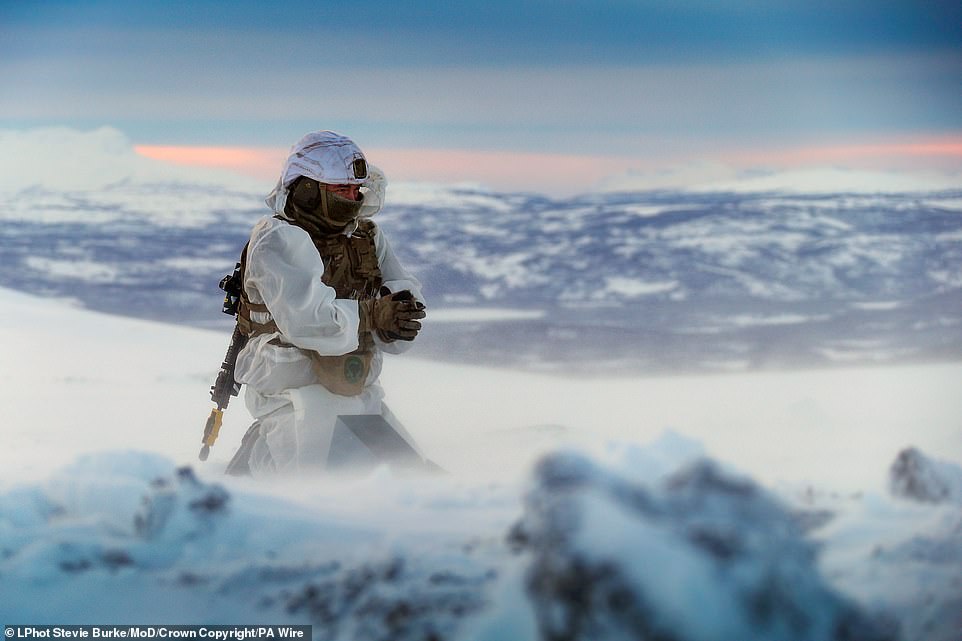 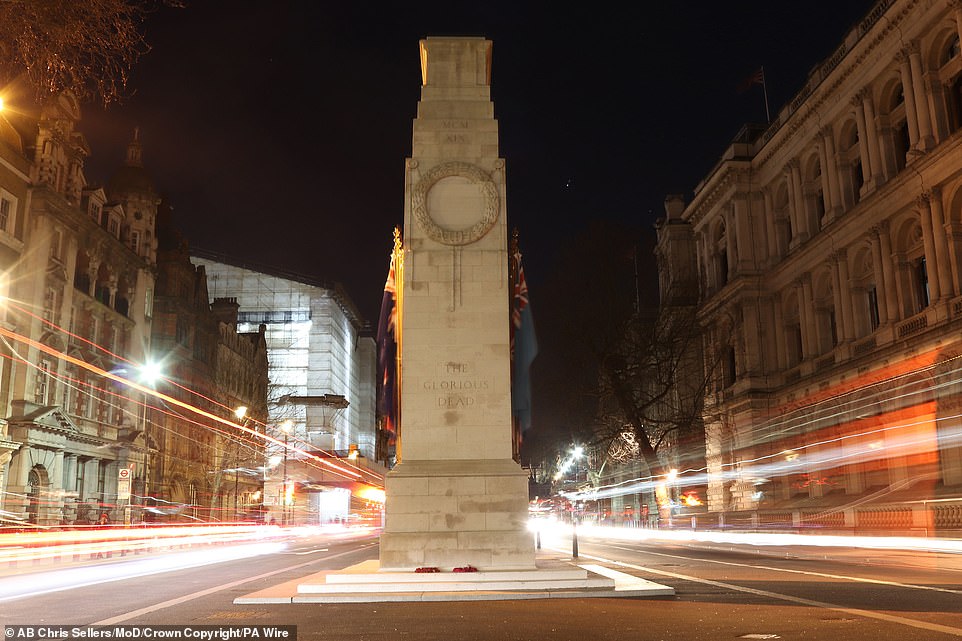 The Glorious Dead: This striking image of the Cenotaph in London was taken by AB Chris Sellers. Rays of light stream past the memorial to the fallen soldiers with two wreaths laying at the foot of the monument. This picture won the Royal Naval Association Award at this year’s Peregrine Trophy Awards 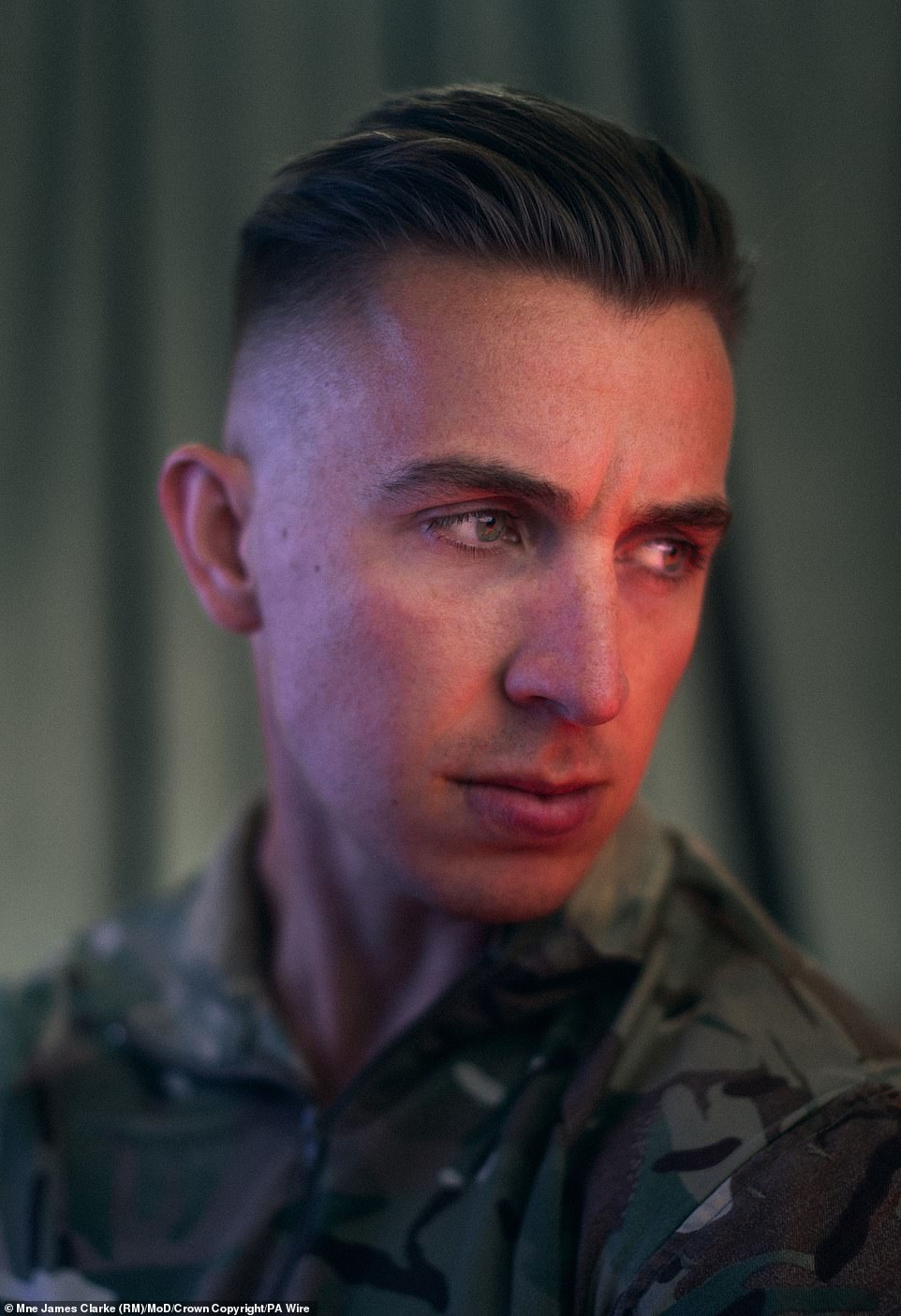 Student of the Year award: Marine James Clarke’s stunning portrait of Corporal Alex Morris, of the Royal Logistics Corps, won the award for Student of the Year. Morris, dressed in uniform, sits and poses for the portrait picture while staring to his left-hand side. A red light shines on his face from the direction he is gazing 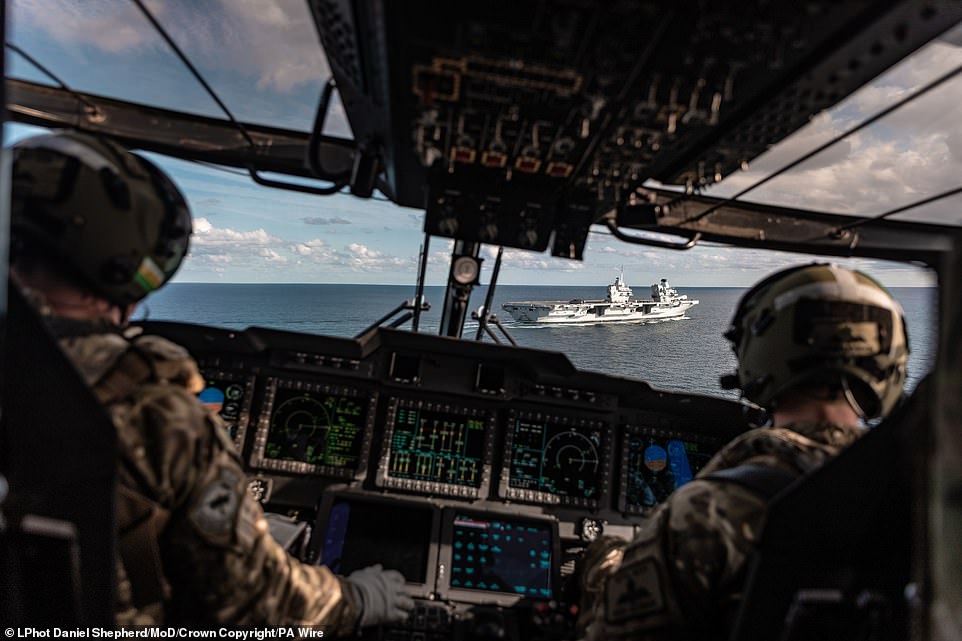 The HMS Queen Elizabeth is seen through the cockpit of a Merlin Helicopter flying to the side of the aircraft carrier. The helicopter flew over to the vessel’s flight deck before landing during trials off of the east coast of America. Dan Shepherd’s incredible aerial view of the aircraft carrier was included in his Peregrine Trophy winning portfolio at this year’s awards

Heroes, in, navy, Pict, Royal, seen
You may also like: