Royal wedding viewers have slammed the BBC’s ‘dumbing down’ coverage after watching a ‘slouchy and embarrassing’ Dermot O’Leary.

The royal wedding is one of the biggest events of the year with more than 20 million viewers in the UK expected to have tuned in to watch Prince Harry and Meghan Markle’s special day in Windsor.

Yet many were left baffled by the talent show host’s addition to the line-up alongside seasoned broadcasters such as Huw Edwards.

Audiences took to social media to bemoan Dermot’s skills and express their longing for David Dimbleby – who until recent years was the main presenter for important state occasions, such as the golden jubilee celebrations. 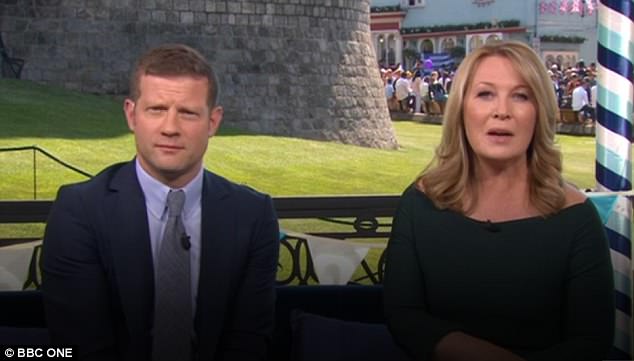 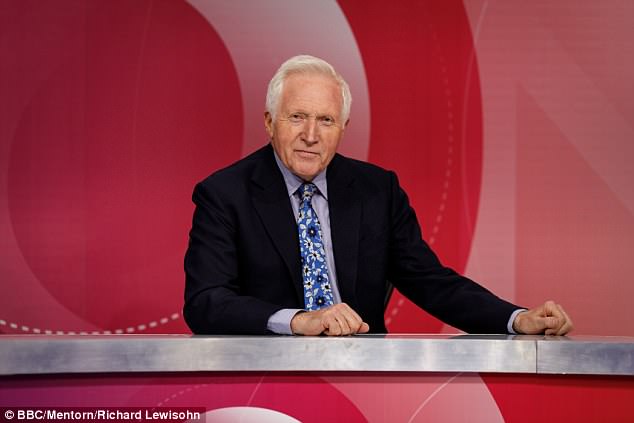 Dermot was clearly very excited about his new role but viewers were left far from impressed by the reality TV presenter’s attitude.

The BBC’s programme was branded ‘boring and embarrassing’ yet ITV was deemed ‘top class’ as viewers decided who presented the royal wedding best.

Fronting the ITV coverage was Phillip Schofield and Julie Etchingham from a purpose-built studio in the Berkshire town.

The BBC decided to freshen up their look by employing Dermot O’Leary and Alex Jones for their main coverage, alongside Scarlett Moffatt as their Radio One royal correspondent.

This is a far cry from the days when David Dimbleby was on call for any large state occasion. 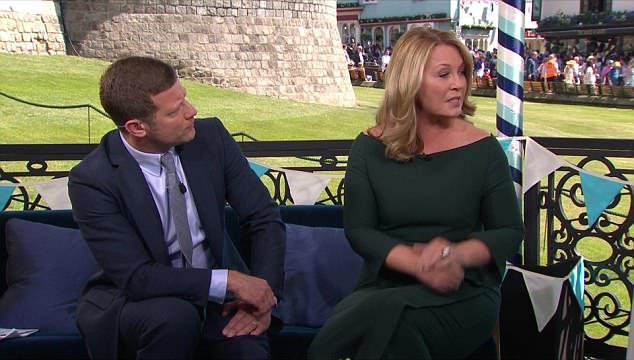 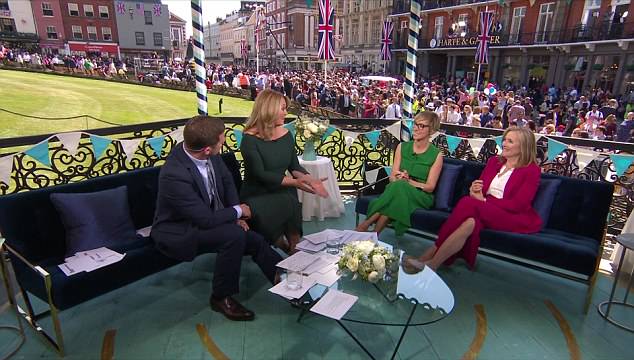 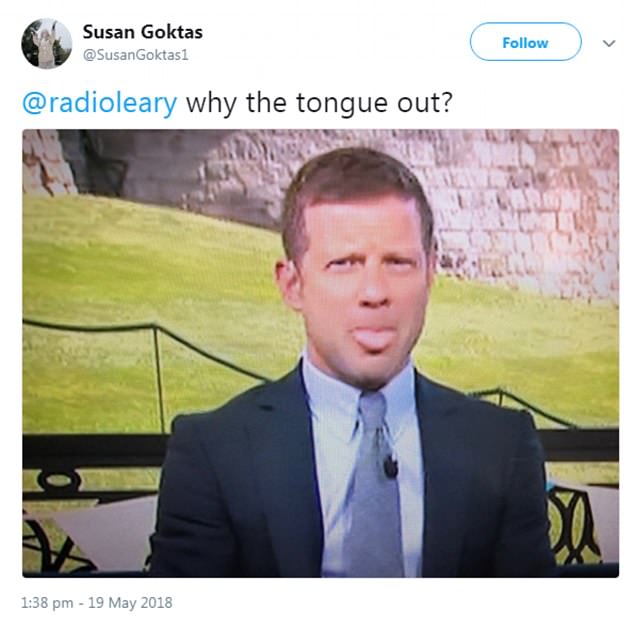 Many on social media have mourned the loss of the veteran BBC presenter and questioned why he was replaced by ’embarrassing hosts’.

‘This seems a very odd choice. It’s like watching some other channel.’

Another added: ‘I want to enjoy the royal wedding but the BBC is foisting Dermot O’Leary on us today. Don’t make me watch Sky.’

Others said: ‘When BBC royal wedding host Kirsty Young says something not remotely funny and Dermot O’Leary bursts into hysterical fake laughter. Every ten seconds. That.’

‘Would be nice if Dermot O’Leary could act like a proper BBC presenter by sitting up straight and speaking clearer.’ 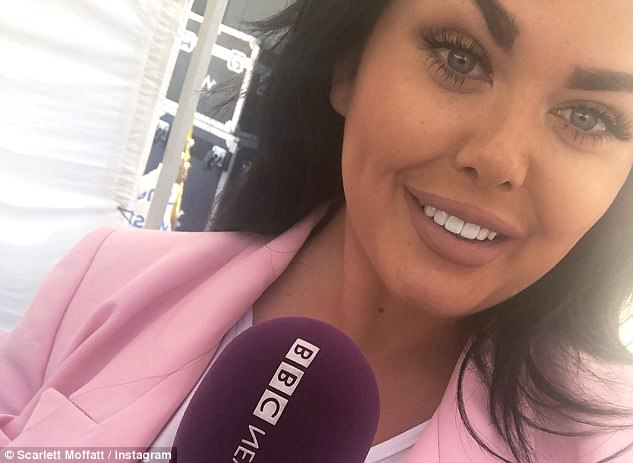 Another questionable host chosen by the corporation was Scarlett Moffatt, who took on the role as BBC Radio One’s royal correspondent 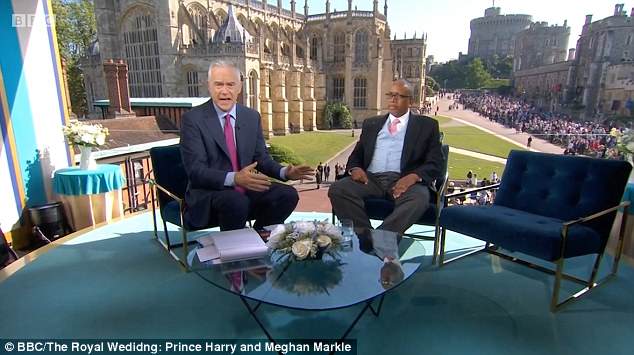 Huw Edwards was one of the more seasoned presenters chosen for the BBC’s coverage of the royal wedding. Pictured here with Prince Seeiso of Lesotho

Not everyone found Dermot to be a disappointing addition to the presenting line-up.

As one viewer commented: ‘I’m very impressed that the BBC got Dermot to do the #RoyalWedding coverage.’

Others were less than impressed with BBC’s coverage in general, criticising it as ‘boring’ and ’embarrassing’

‘Royal wedding broadcast boring! Too much focused on same people. Changed channel from BBC to ITV.’ 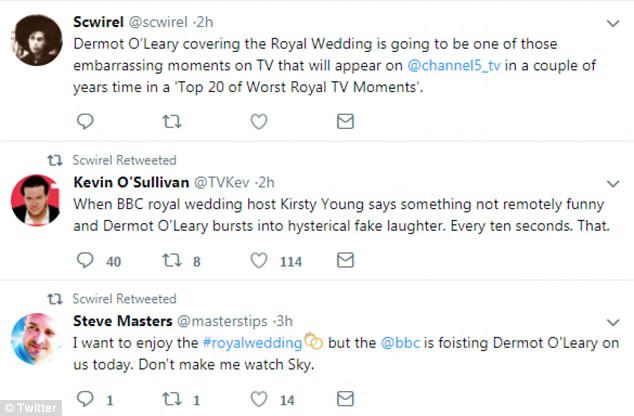 Some said: ‘The bbc commentary for the royal wedding is horrendous,’ and ‘the bbc coverage is embarrassing. Dermot can’t even save it.’

The broadcaster’s royal wedding coverage began on BBC One at 9am today and finished at 2pm.

In contrast to the BBC’s heavily criticised coverage, the ITV’s programme was deemed ‘top class’ and for ‘nailing the mood of the nation’.

Phillip Schofield and Julie Etchingham hosted this year’s royal wedding after their successfully presenting the Duke and Duchess of Cambridge’s marriage in 2011. 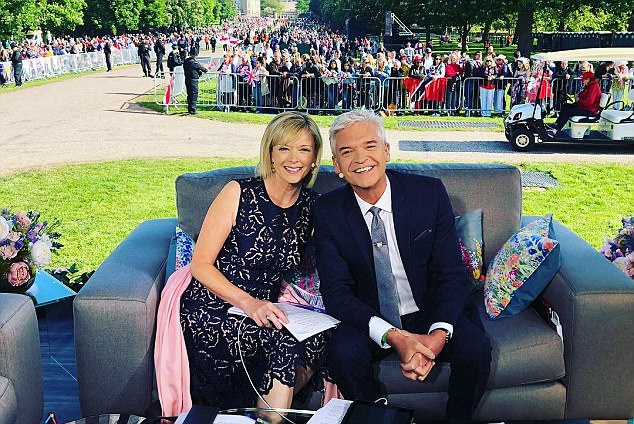 Speaking about hosting together again, Schofield said: ‘So happy to be back with Julie, my Royal Wedding partner (we don’t get to work together very often!) and the brilliant team at ITV News. Put your hat on, we’re going to have a party!’

Many online loved the pair and the atmosphere they created with one saying: ‘The royal wedding coverage from Phillip Schofield on ITV has just nailed the mood of the nation and the modern feel of this wonderful occasion!’

Others wrote: ‘Phillip Schofield and the ITV team are owning this wedding coverage over the BBC here in Windsor. Top class presenting! Never change Schofe!’

‘ITV, gonna admit I wasn’t going to watch the royal wedding. However with your coverage, especially with Schofe, I’m glued to the screen.’ 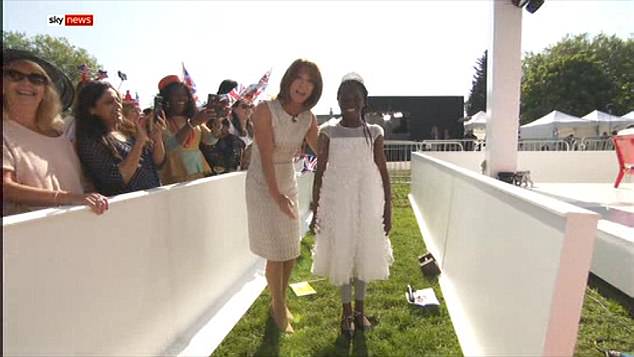 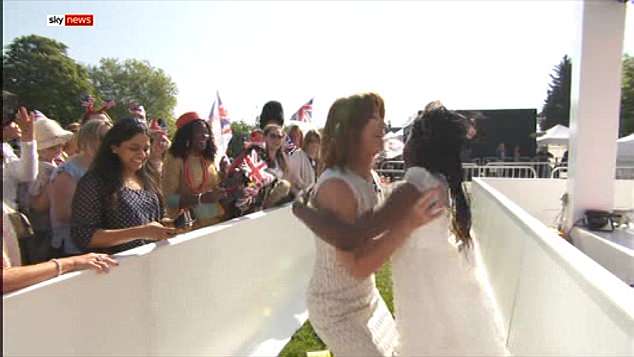 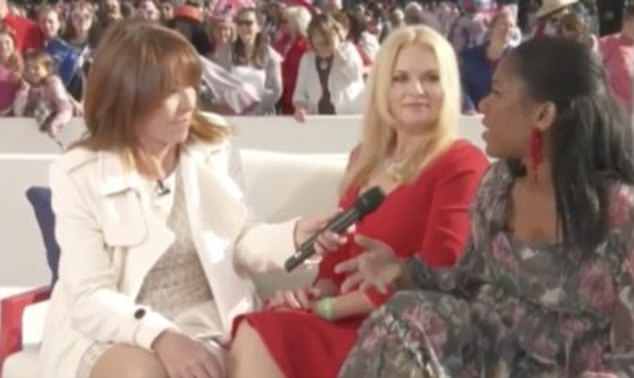 Another added: ‘The royal wedding and Schofield what more could a girl want for on a Saturday morning.’

The broadcaster’s royal wedding live show began at 9.25am and ended at 3pm.

One online commentator said: ‘Is this the Royal Wedding or the Kay Burley show?’

Another wrote: ‘The presenter’s on Sky reporting the royal wedding are the most annoying people.’

However, not everyone was disappointed by the Sky coverage with one social media user writing: ‘Sky News have done excellently in the coverage of the royal wedding’

People were also confused as to why Ms Burley apparently decided to take off her shoes when talking to the crowds.

Yet some people were all for it, with one person writing: ‘Loving Kay Burley for taking her shoes off.’

Not everyone was disappointed by the Sky coverage with one social media user writing: ‘Sky News have done excellently in the coverage of the royal wedding.’

Ultimately, many admitted to flicking back and forth through the channels to capture every minute of the day.