Russia to ban entry of Chinese nationals to halt virus

Russia today said it will ban all Chinese citizens from entering the country due to the virus outbreak centred in China that has infected more than 73,000 people worldwide.

The temporary entry ban comes into effect from Thursday at midnight Moscow time for an indefinite period, according to a decree signed by Russian Prime Minister Mikhail Mishustin.

The Kremlin said it took the move due to the ‘worsening epidemiological situation’ in China.

Russia has taken drastic measures to stop the spread of the COVID-19 outbreak which has claimed nearly 1,900 lives in China and around the world.

It has already closed its 2,650-mile border with China and Mongolia as well as imposing other travel restrictions.

There have been no more coronavirus cases in Russia since two women, who returned from China recently, were treated and released from hospital. 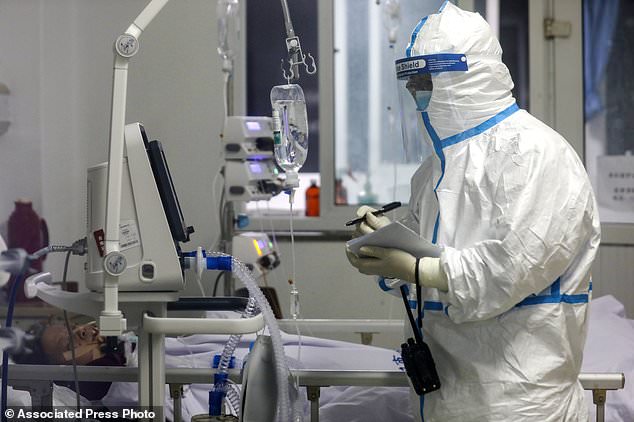 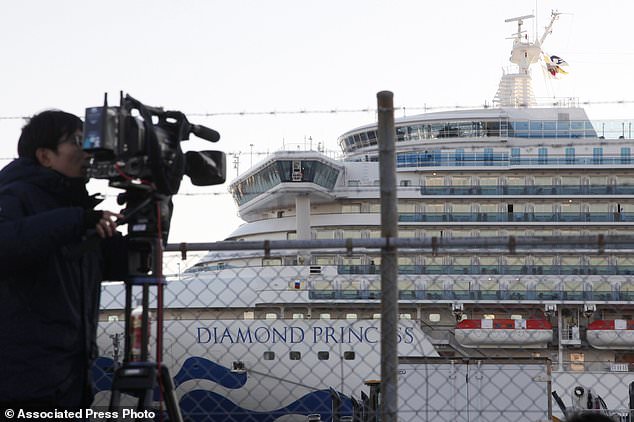 A TV cameraman filming the quarantined ship Diamond Princess anchored at Yokohama port in Yokohama, near Tokyo today. The cruise ship will begin letting passengers off the boat on Wednesday after it’s been in quarantined for 14 days

Chinese nationals visit Russia as tourists or live there for work or study and many transit through Russian airports en route to the West.

Deputy Prime Minister in charge of health, Tatiana Golikova, said: ‘The entry of all Chinese citizens via Russia’s state frontiers will be suspended from February 20 for work travel, private travel, study and tourism.’

She added that the decision was taken ‘because of the worsening of the epidemic in China and the fact that Chinese nationals are continuing to arrive on Russian territory’.

The new entry ban will not affect travellers who need to transfer flights at Russian airports, authorities said.

Apart from the two Chinese citizens in Russian who were treated and released, a Russian national was also infected on the Diamond Princess cruise ship now quarantined in Japan.

However, Russian authorities have taken significant steps to try to keep the virus from spreading, including hospitalising hundreds of people as a precaution after they returned from China.

Russia halted most air traffic to China, suspended all trains to China and North Korea, and temporarily stopped issuing work visas to Chinese citizens. Chinese students studying in Russia were told not to return until March 1.

Earlier this month, the prime minister said Russia might start deporting the foreigners infected with the virus. 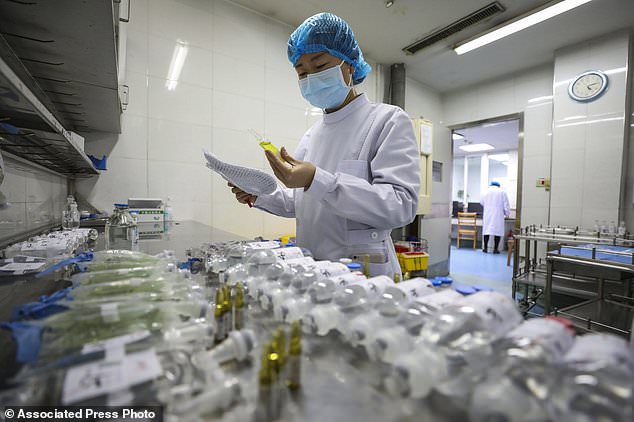 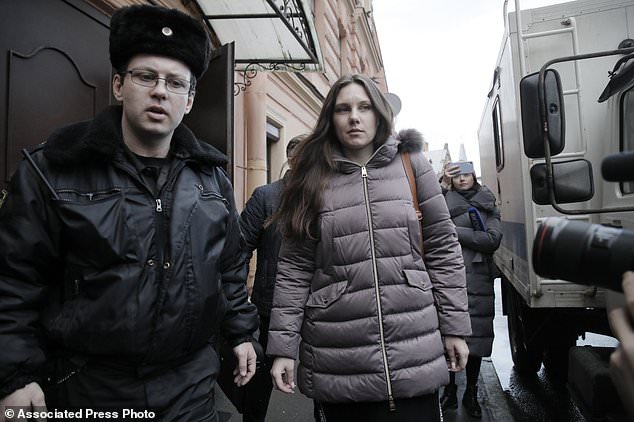 Alla Ilyina, who broke out of the hospital on February 7 after learning that she would have to spend 14 days in isolation instead of the 24 hours doctors promised her, being escorted by a bailiffs form a court after a session in St. Petersburg, Russia, on Monday

Yesterday a Russian court ordered a woman who escaped from a coronavirus quarantine to return back to the hospital.

Alla llyina was admitted to the hospital in St Petersburg on February 6 with a sore throat and was tested for the strain, officially named Covid-19 by the World Health Organisation, because she had returned from China five days earlier.

She broke out of the hospital the next day by disabling an electronic lock in her room after finding out she would have to spend 14 days in isolation instead of the 24 hours that doctors promised her.

In an Instagram post, Ilyina said doctors told her that she tested negative for the virus but still had to remain quarantined for two weeks.

In the meantime, Germany is sending a second shipment of medical aid supplies to China to help the Asian giant fight the coronavirus epidemic.

German Foreign Minister Heiko Maas said the government would send 8.7 tons of aid supplies worth $162,000 (€150,000), including protection gear and disinfectants.

‘Germany stands firmly on the side of China in the battle against coronavirus and works closely and trustfully with the Chinese officials,’ Maas said. ‘We have the utmost respect for the efforts China has already undertaken.’

The virus, which emerged in central China in December, has killed 1,868 patients in mainland China and five others elsewhere. The World Health Organization has named the illness COVID-19. 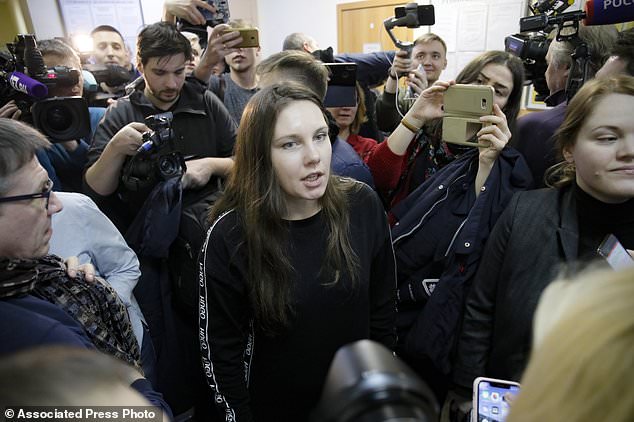 Ilyina, who escaped from a hospital in St. Petersburg, where she was being kept in isolation for possible inflection by the new coronavirus, was ordered by court on Monday to return back to the quarantine for at least two days

China has instituted a strict lockdown on over 60 million people in central Hubei province and other nations are taking their own measures – including mandatory 14-day quarantines – to stop the virus from getting established on their territory.

Europe has had one virus death among its 47 confirmed cases, an 80-year-old Chinese tourist in Paris who was initially turned away by two French hospitals.

Italy says 14 of 25 Italian crew members aboard the troubled Diamond Princess cruise ship, which has been struck under quarantine in Japan, will take an Italian evacuation military flight home.

The other 11, including the captain of the ship, will stay, the Italian Foreign Ministry said. No date for the Italian air force plane’s departure for Japan has been decided yet.

The Russian Embassy in Japan announced Tuesday that one Russian was among the 542 people on the Diamond Princess confirmed with the virus. The statement clarified earlier reports about two Russians getting infected.

On Monday, a Russian court sent a woman who broke out of a locked hospital during a 14-day isolation period back into quarantine. Russian health authorities are suing others who have defied quarantine requirements.

ban, Chinese, entry, of, russia, to
You may also like: